Copyright: © 2016 Murakami S, et al. This is an open-access article distributed under the terms of the Creative Commons Attribution License, which permits unrestricted use, distribution, and reproduction in any medium, provided the original author and source are credited.

Pain is one of the most common problems in palliative medicine. According to a systematic literature review, prevalence of pain was 33% in patients after curative treatment, 59% in patients being treated for cancer, and 64% in patients with metastatic, advanced, or terminal phase cancer [1]. Reported response rates of adequate analgesia when using The World Health Organization analgesic ladder guidelines [2] have varied between 71 and 100% [3]. Opioid therapy should be used as the main palliative in all cancer patients with at least moderate pain.

Clinically, many cancer patients receive opioids for pain control in spite of concomitant renal dysfunction. This treatment carries significant risks, including metabolite accumulation, increased elimination half-lives, and toxicity (e.g., accidental overdose) in such patients [4-8]. Morphine, for example, has active metabolites such as morphine-3-glucuronide and morphine-6-glucuronide [4-6]. Oxycodone is relatively safe because it produces fewer active metabolites [7,9], and fentanyl's metabolite, norfentanyl, has no biological activity. However, the pharmacokinetics of opioids during hemodialysis are not completely understood [10]. We investigated the time course of the plasma concentration of oxycodone and pain during hemodialysis in a 55-year-old male using oxycodone for cancer pain.

The patient provided written permission for publishing this report.

A 55-year-old man with a history of lung cancer, liver metastasis, a liver abscess, and glomerulonephritis (RPGN) associated with methicillin-resistant Staphylococcus aureus (MRSA) infection presented at our department. He underwent a right upper lobectomy, with resection of the parietal pleura, for right lung cancer. He had a recurrence of the cancer, liver metastasis, and a liver abscess postoperatively, and was treated via a left hepatic lobectomy for the metastastic liver tumor. Oxycodone (Oxycontin®; 80 mg/day) was used to treat severe pain in his right chest. He didn’t receive drugs which influence the metabolism of oxycodone such as CYP3A4 and CYP2D6 inhibitors and inducers. Elevated serum creatinine, proteinuria, and hematuria indicated glomerulonephritis-induced renal failure. He then presented at our department for pain control during hemodialysis.

He presented to us with pain in his right chest, right back, and right arm. The right chest and back pain were intermittent sharp pains, and localized in his right precordia and around his scapula. The maximum, minimum, and average pain scores based on the 0–10 numeric rating scale (NRS) were 4/10, 2/10 and 2/10 respectively. Neither neurological disturbances, hypaesthesia, nor listlessness was identified, and the douleur neuropathique 4 questions (DN4) score was a 0/10. We therefore diagnosed these right chest and back pains as somatalgia. However, the right arm pain was continuous and intermittent, relatively sharp, and localized in the area supplied by the ulnar nerve. No shooting pain was identified. The maximum, minimum, and average pain scores on the 0–10 NRS were 4/10, 2/10, 2/10 respectively. The arm pain was accompanied by allodynia and hypoesthesia as identified by cold test (6-7/10), pinprick test (6-7/10), and touch test (6-8/10). Muscle weakness, scored 3/5 on the manual muscle test (MMT), was also identified in the areas innervated by the ulnar, radial, and musculotaneous nerves. The DN4 score was 5/10. We therefore diagnosed his right arm pain as neuropathic pain, mainly caused by disturbance of the right brachial plexus related to his right lung cancer.

His blood urea nitrogen (BUN) and serum creatinine were 111–169 mg/dL and 11.6-14.6 mg/dL, respectively, and estimated glomerular filtration rate (GFR) was 3.5-4.2 mL/min/1.73 m2. His liver function was classified into Child-Pugh class B, according to a platelet level of 14.9×104/μL, a prothorombin time of 56.6% of normal, and a total bilirubin level of 1.1 mg/dL. His pain was successfully controlled with 80 mg/day of oxycodone sustained action tablets (Oxycontin®), and several uses of 20 mg of immediate release oxycodone hydrochloride (Oxinorm®) as rescue.

Blood samples were collected to determine the plasma concentration of oxycodone at the following time points: Before hemodialysis; 15 min, 60 min, 120 min, and 180 min after the beginning of hemodialysis; 3 h (second hemodialysis) and 4 h (first hemodialysis) after the end of hemodialysis (Figure 1 and 2). Vital signs including heart rate, blood pressure, respiratory rate, Ramsay Sedation Score, and 0–10 NRS were recorded at the same time points. The listed vital signs were additionally recorded at 45 min after the beginning of hemodialysis, and at any time at which the patient complained of symptoms such as increasing pain or nausea (Figure 1 and 2). When the patient's pain increased during the study period, he was given 20 mg of Oxinorm® orally on the first day of hemodialysis, or 2.5 mg of Oxyfast® administered subcutaneously using a patientcontrolled analgesia (PCA) pump on the second day of hemodialysis, as rescue medicine.

The first hemodialysis treatment used a dialysis system (DCS-27; Nikkiso, Tokyo, Japan) with a dialyser (KF-15C; Asahi Kasei medical, Tokyo, Japan) set to a flow rate of 120 mL/min, and began 140 min after he took the oxycodone sustained action tablets. We decided the flow rate relatively low at 120 ml/min following the advice of Board Certified Nephrologist of the Japanese Society of Nephrology considering the risk of the prevention of the disequilibrium syndrome, and this setting is common in Japan. His right chest and back pain increased at 15 and 60 min after the beginning of hemodialysis (Figure 1), so he took rescue medicine each time. The location and quality of the chest and back pain were not changed. The plasma concentration of oxycodone decreased over the course of hemodialysis treatment, and then increased after the end of hemodialysis (Figure 1). After hemodialysis was finished, his right chest and back pain immediately improved, and no side effects were observed that would indicate an overdose of oxycodone. 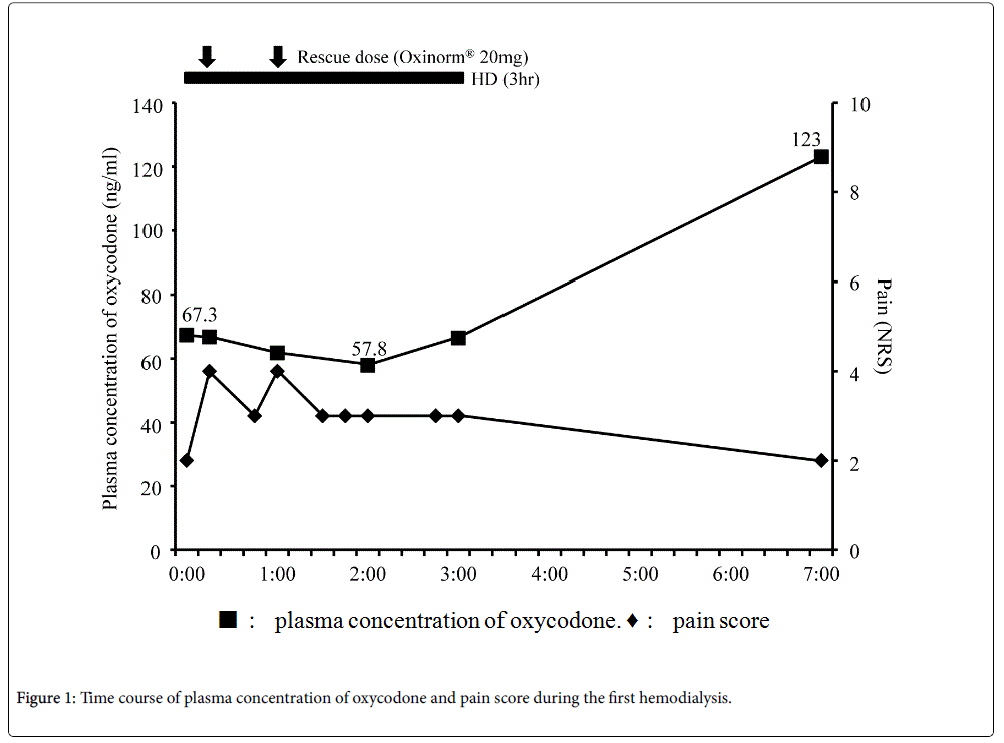 Figure 1: Time course of plasma concentration of oxycodone and pain score during the first hemodialysis.

On the next day, oxycodone was administrated continuously via subcutaneous injection instead of orally, in order to better control the plasma concentration of oxycodone. He was administered 2.5 mg/h of Oxyfast® subcutaneously, and a bolus of 2.5 mg of Oxyfast® using the PCA system as rescue medicine. This system successfully controlled his pain. Figure 2: Time course of plasma concentration of oxycodone and pain score during the second hemodialysis.

In this study, a patient with cancer who used oxycodone for pain control underwent hemodialysis for renal failure. The plasma concentration of oxycodone decreased over the course of hemodialysis, and increased after it ended. In contrast, the patient's pain increased during hemodialysis, requiring rescue medicine each time it increased, and then improved after hemodialysis ended. No side effects indicating an overdose of oxycodone were identified throughout the study periods.

Evidence from several studies indicates that good renal function is necessary for eliminating oxycodone and its metabolites from the body. For example, Pöyhiä et al. reported that 8–14% of the dose of oxycodone is not metabolized before being excreted in the urine [11]. Kirvela et al. reported that the elimination half-life of oxycodone is lengthened in uremic patients, and that excretion of metabolites is severely impaired [12]. Heiskanen et al. and Kaiko et al. reported that oxymorphone has no significant pharmacodynamic effect in subjects with normal renal function [9,13], but its accumulation could be expected in subjects with renal failure.

A significant amount of oxycodone is removed by hemodialysis, because its molecular weight and the degree of plasma protein binding are relatively small [13]. Conversely, plasma oxycodone levels should rebound (increase) after hemodialysis is stopped because of the drug's high volume of distribution.

As limitation of this study, it is difficult to make recommendations based on pharmacodynamics / kinetics of Oxycodone relying solely on its plasma concentration only in this case, but we think that our results could be useful for the making clinical decision. Additionally we did not measure oxycodone metabolites such as oxymorphone and noroxycodone. The activity of oxymorphone is negligible clinically in subjects with normal renal function but it could influence the analgesic effect in End-stage Renal Disease (ESRD) population. On the other hand, noroxycodone has no analgesic effect. Concerning data points, we should have set more measuring points of plasma concentration of oxycodone and pain score for further information.

This work was supported in part by the National Cancer Center Research and Development Fund (23-A-29).