Amoebic dysentery is an infection of the gastrointestinal tract caused by the parasitic Entamoeba histolytica, the most invasive type of Entamoeba species. Tropical and sub-tropical developing countries like South Africa, West Africa, Central America, South America, India, Pakistan and Mexico have high rate of incidence where it is a serious health threat. Commonly it affects young to middle-aged adults but the most affected age groups are of infants. Among the infected ones 90% does not produce any symptoms and are therefore asymptomatic but the remaining 10% produces a spectrum varying from dysentery (inflammation of the intestine i.e. large intestine characterized by the presence of blood and mucus in their faeces) to amoebic liver abscess. This study was conducted in Satellite town (an area in Quetta city) and stool samples of 100 patients were collected from a nearby hospital (Saiban family hospital) in this particular area. The patients within age group between 2 to 6 years were examined for E. histolytica cysts presence using iodine solution as the basic diagnostic technique. Parameters like gender, haeme positive stool, blood group, BMI and age were determined for the examined patients. Besides that a questionnaire was also designed consisting of simple questions related to the disease to know more about its occurrence. The results obtained from this analytical study revealed that the incidence of childhood dysentery is relatively high in this area indicating that the parasite is more prevalent in male (77%) children within the age group of 2-5 as compared to in females. The high rate of incidence of this parasite could be due to low immunity level of the hosts caused as a result of malnourished status, poor personal hygiene and inadequate sanitary conditions. Contaminated water supply also contributes to this high rate.

Amoebic dysentery is caused by the pathogen Entamoeba histolytica , a parasitic protozoan, which primarily infects humans and other primates [1].This parasitic infection targets the large intestine of the host organism and there is no age limit for its incidence. It commonly affects young ones and middle aged adults. Amoebic dysentery is also known as Amoebiasis which is defined as the harboring of the pathogen Entameoba histolytica with or without clinical symptoms. Tropical and sub-tropical areas have high rate of incidence of amoebiasis where it is a serious health threat however it is worldwide distributed [2]. The number of infected ones per year is found to be 450 million, with a death incidence of 50 million, and 100,000 in total (Ravdin and Petri)[3]. Out of 100 about 90% of infected patients do not show any symptoms and are asymptomatic and the remaining 10% produces a spectrum varying from dysentery (inflammation of the large intestine characterized by the presence of blood and mucus in their faecal excrete) to amoebic liver abscess [4]. The primary reservoir for E. histolytica is “Humans” and the major route of transmission is through contaminated fresh food or water [5,6]. Another route of transmission is oral-anal sexual contact [5]. Symptomatic intestinal amoebiasis usually presents with a subacute onset of one to three weeks. The symptoms range from mild diarrhea to severe dysentery (proctocolitis) with abdominal pain and bloody diarrhea [7]. Patients with dysentery typically have colic pain.

Although weight loss occurs in about one-fifth of patients [8] and fever in about 8 to 38% [7], systemic manifestations are generally absent. These presentations can be differentiated from diarrhea of bacterial origin, where patients frequently display systemic signs and symptoms, such as fever, chills, headache, anorexia, nausea and vomiting [5]. The diagnosis of invasive amoebiasis can be achieved by a combination of methods, such as stool examination, serological testing, and colonoscopy and biopsy of intestinal lesions [8]. Presence of cysts or trophozoites on stool microscopy suggests intestinal amoebic infection. The possible treatment is Antibiotic for intestinal amoebiasis to eradicate the invasive trophozoites and the intestinal carriage of the organism. Metronidazole is considered to be the drug of choice for symptomatic invasive amoebiasis. Paromomycin is considered to be the drug of choice for non-invasive disease [6]. Moreover, resistance to this drug has not been reported. Other drug treatments include tinidazole, ornidazole, chloroquine, and dehydroemetine (for inpatient use). Prevention strategies for travelers to endemic areas include avoiding un-boiled or un-bottled water, uncooked food, and fruits and vegetables that may have been washed with local water. There is some evidence of acquired partial immunity against amoebic infection. Development of vaccine is currently ongoing. The exact rate of incidence of Amoebic dysentery in the tropical and subtropical areas where it is reportedly endemic is unknown however its distribution is acknowledged to be worldwide [9]. Unfortunately, there is insufficient information with regards to the incidence of intestinal amoebic dysentery in children inspite of the increasing number of patients with this condition. Therefore in the light of the above mentioned clinical and public health importance of amoebic dysentery, the main aim of my study was to determine the prevalence of childhood dysentery with the hope that the findings of my study will aid the practitioners with adequate information required to deal with this health threat.

The research study was conducted in satellite town (an area in Quetta) to collect data on the prevalence of E. histolytica and its association with factors such as age, sex, blood group, BMI in children. Stool specimens from patients between the ages of 2 to 6 were examined (n=100) and both the genders were included for this study. Informed consent was obtained from the patient’s (affected children) parents/guardians before the beginning of the research study and children’s age, gender, blood group and BMI were determined. Macroscopic i.e. visual examination of the collected stool samples for the presence of mucus/or blood was done and microscopy using iodine solution was performed for the confirmation of Entameoba Histolytica cysts presence in the stool samples (inclusion criterion was Entameoba Histolytica cysts and blood presences in the faecal samples).Besides that a questionnaire was designed to be filled by 50 dysenteric patients (children’s parents/guardians) that aimed to find more information about childhood dysentery, its causes/mode of transmission, obvious clinical sign and symptoms in acute and severe form followed by prescribed diagnostic tests and medication for the mention stages and also the possible interventions to control or lowers its chances of occurrence. Statistical analysis of the collected data was done Microsoft excel.

Figure 1 depicts the gender distribution of the patients suffering from Amoebic dysentery (E. histolytica ) and it was found to have higher incidence rate (77%) in male children (patients) as compared to (23%) in female children out of the total 100 patients. 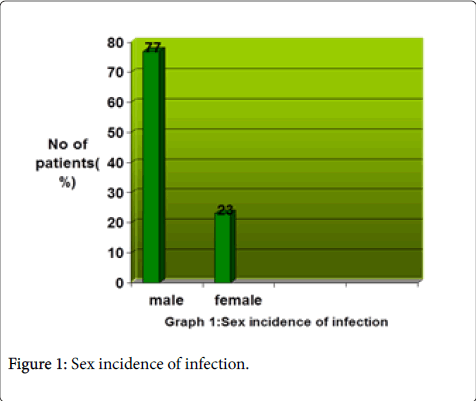 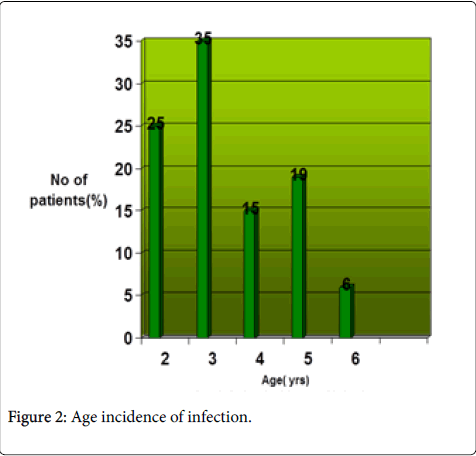 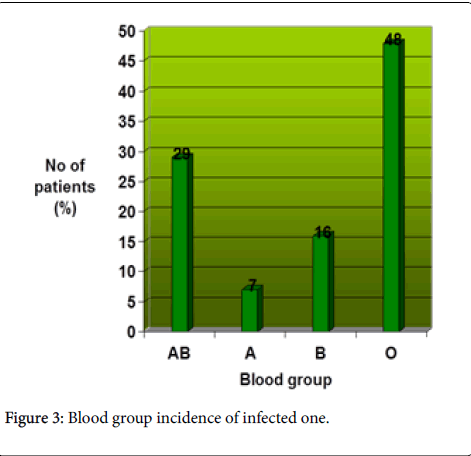 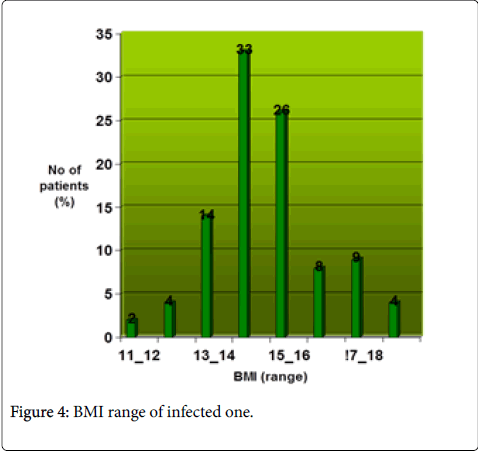 Figure 4: BMI range of infected one.

Our study showed that the male patients were more infected than the females, (77%) and (23%) respectively, the reason for this high rate of infection in male is probably due to their weak immune system which accounts for this high prevalence in this sex group indicating that female are internally more stronger to resists the infection as compared to males. However geographical reason can be the cause of male dominance but the statistical significance for the observed difference cannot be stated. However it is not surprising when one finds that both the genders occupy the same habitat. In this study the age groups that are taken into consideration, among them children of age of six were infected least only 6% but children with ages between 2-5 years were infected the most. The reason for this is their malnourished nutritional status as indicated by their low BMI that lie below the normal range of 18.5 providing low level of internal defense against various disease causing microbes as these age groups possess low level of resistance towards diseases as stated Author by Haq et al. in his study [10]. The immune system of the young ones are quiet immature and weak and due to insufficient antigen exposure the risks of getting infections are higher which are found to be severe in this particular time of age [11]. Besides that children are carefree and play anywhere without any concern regarding the filthiness of a place, eating or drinking contaminated food/water also accounts for this high incidence. Another observation that was made during the study was the observed relationship between blood group ABO with E. histolytica . Our data suggested that E. histolytica is found to be dominant in children with blood group O and AB, (48%) and (29%) respectively, as compared to children having blood group A (7%) and B (16%). Blood groups O and AB were found to be more susceptible to Entameoba histolytica associated Amoebic dysentery but statistical significance cannot be stated. Clinical signs and symptoms of E. histolytica associated dysentery in acute form were nearly same in all children with the possibility of presence or absence of one or more symptoms depending on child’s health and history of previous dysenteric infections as indicated in my survey. However prolonged infection can attain a severe form leading to conditions like severe abdominal pain, intense diarrheal episodes and severe dehydration leading to kidney failure. Poor sanitation and low standard of personal hygiene as well as drinking contaminated water accounts for this high prevalence rate as indicated by our survey conducted in this area in which out of the 50 (for each transmission mode) dysenteric patients that were interviewed 43 of them agreed that poor sanitation and hygiene increases the risk of amoebic infection and 48 stated contaminated water as the prime cause of E. histolytica transmission.

Low immunity of hosts as a result of malnourished status, poor level of hygiene, improper sanitary conditions and contaminated water supply contributes to prevalence of Amoebic dysentery in satellite town thus a serious health threat spreading instantaneously in this area affecting young ones and infants.