Plasma System S.A.’s offer includes manufacture of protective coatings for tools and machine parts. Recently, in cooperation with national research centers, the company has designed new types of coatings: double-layer Al2O3/vitreous carbon coating applied via plasma spraying [1], and W/Zr-DLC hybrid coating applied via AEEB PVD technologies [2]. Research has shown that applying the above-mentioned coatings on graphite industrial crystallizers, used for casting copper and its alloys, extended their lifespan significantly [3,4]. The said coatings demonstrate good adhesion to graphite surface, tightness, as well as resistance to degradation under the influence of liquid metal. The amount of liquid metal adhering to the surface diminished considerably, in comparison with crystallizers that lacked coatings. In addition, the problem of liquid metal penetration into graphite pores was resolved.

Sample coated crystallizers were subjected to several tests, including microstructure and chemical composition tests, wettability of liquid copper test, as well as micro- and nanohardness measurements. Furthermore, operational tests were conducted, during which tin and aluminum bronze was seeped through the coated crystallizers. It was observed during laboratory operational tests of Al2O3/ vitreous carbon coated crystallizers [1] that, apart from locally torn small pieces of vitreous carbon coating, the crystallizer’s surface was not damaged much, after having been subjected to the casting process. Tin and aluminum bronze, which was seeped through the sample piece, deposited on the surface of the coating in a form of small microdroplets, which failed to penetrate the coating. In addition, similar tests were also conducted on crystallizers covered with Al2O3 coating that lacked the outer layer of vitreous carbon. As it was revealed, in such a case the coating underwent complete degradation. Due to the fact that both the single-layer Al2O3 coating and the double-layer Al2O3/ vitreous carbon coating were characterized by low wettability (wetting angle amounting to 130°), significant microhardness (930 μHV) and identical microstructure, it could be concluded that the outer layer of vitreous carbon was the factor responsible for protecting the coating from separating from the surface due to high temperature.

The cross-section of W/Zr+DLC coating, depicted in Figure 2, demonstrates a graphite substrate, a relatively thick (approx. 15-micrometer) tungsten interlayer, and an approx. 2-micrometer layer of Zr+DLC. Transmission electron microscopy tests revealed the existence of additional thin layer of Zr between the tungsten and Zr+DLC layers. The said layer is characterized by nonporous, crystalline and nanometric microstructure. 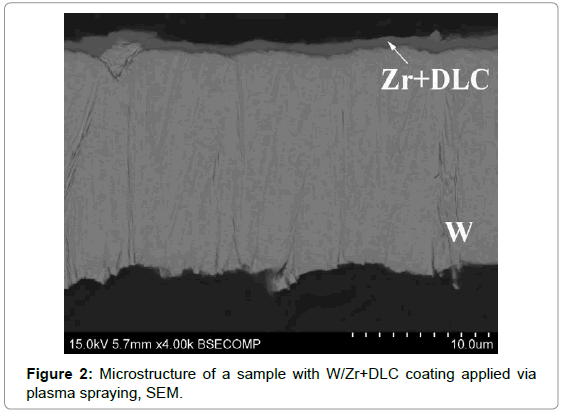 Figure 2: Microstructure of a sample with W/Zr+DLC coating applied via plasma spraying, SEM.

The application of outer layer of Zr+DLC was necessary due to high wettability of liquid copper through the tungsten layer. Moreover, the results of microhardness measurement of a sample covered with the W/Zr-DLC hybrid coating revealed the outer Zr+DLC layer to demonstrate microhardness (3948 HV) that was almost five times higher than that of the tungsten interlayer (816 HV). Such a high nanohardness of the outer layer was caused by the presence of hard zirconium carbide phases [2].

Protective coatings manufactured by Plasma System S.A. have a wide array of properties that contribute to a significant lifespan extension of tools and machine parts. The above-presented test results confirm the applicability of Al2O3/vitreous carbon coating and W/Zr- DLC hybrid coating in the protection of graphite industrial crystallizers. Furthermore, the said coatings could undoubtedly be applied in a number of other situations, especially for protection of tools and machine parts operating in the environment of high temperatures. Continuous improvement of coating manufacture processes as well as in-depth research on the selection of their chemical composition contribute to Plasma System S.A.’s being one of the leaders in the area of surface engineering.

Copyright: © 2017 Grzelka R, et al. This is an open-access article distributed under the terms of the Creative Commons Attribution License, which permits unrestricted use, distribution, and reproduction in any medium, provided the original author and source are credited.