Copyright: © 2016 Kumari Pushpa Rani TP. This is an open-access article distributed under the terms of the Creative Commons Attribution License, which permits unrestricted use, distribution, and reproduction in any medium, provided the original author and source are credited.

Actinomycetes are gram positive bacteria with branched filaments, which grow as substrate hyphae and form, aerial mycelia and spores upon depletion of nutrients. Because of their well-developed morphological and cultural characteristics, the actinomycetes have been considered as a group well separated from common bacteria [1]. They have high guanine (G) plus cytosine (C) ratio in their DNA (>55 mol%), which are phylogenetically related from the evidence of 16S ribosomal cataloguing and DNA: rRNA pairing studies [2]. Marine bioactive compounds are organic compounds produced by microbes, sponges, seaweeds, and other marine organisms. The host organism synthesizes these compounds as non-primary or secondary metabolites to protect themselves and to maintain homeostasis in their environment.

Actinomycetes are easily isolated from the marine environment and actinomycetes are important microorganisms since more than 90% of practical antibiotics originate from them and two thirds of 10,000 biologically active substances of microbial origin are produced by them. Important secondary metabolites, including antibiotics, herbicides and growth promoting substances are produced by several members of the actinomycetes [3]. Actinomycetes are thought to be of most significant in the degradation of relatively complex polymers occurring naturally in plant litter and soil [4]. The most relevant reason for discovering novel secondary metabolites is to circumvent the problem of resistant pathogens, which are no longer susceptible to the currently used drugs. Marine actinomycetes are efficient producers of new secondary metabolites that show a range of biological activities including antibacterial, antifungal, anticancer, insecticidal and enzyme inhibition.

The soil samples were collected at the depth of 50-300 cm using sterile polythene bags with sterile spatula from the coastal area of Thiruvananthapuram District, Kerala. The collected soil sample was pretreated with CaCO3 (10:1 w/w) and incubated at 37ºC for 4 days and stored for further analysis.

Characterization and mass cultivation of actinomycete

In order to characterize the actinomycete isolate their microscopic and biochemical analysis were carried out. A loopful of inoculum for chosen actinomycete strain was inoculated into 500 ml of ISP 1 broth and kept at 28ºC for 7 days with continuous shaking in a rotary shaker (REMI INDIA) at 120 rpm.

The crude extract of Streptomyces was harvested and ground with phosphate buffer (pH 7.0). This was resuspended in 40 μl TE buffer to which 6 μl of SDS and 2 μl of loading dye was added. The sample was heat denatured at 95°C for 5 min and then loaded on the SDS-PAGE gel. After electrophoresis, the gel was carefully transferred to Coomassie Brilliant Blue staining solution [0.5 g of Coomassie Brilliant Blue R250 (Sigma, Germany) in 90 ml methanol (1:1 v/v) and 10 ml glacial acetic acid], followed by destaining solution (30% methanol and 10% acetic acid) on a rocker. Finally, the results were documented and photographed using a Gel Documentation System (Alpha Digitoc, New York, US).

Determination of antibacterial activity of protein from actinomycete

The antibacterial activity was determined by well diffusion method. Muller Hinton Agar was poured on petriplates and overnight of bacterial pathogens broth culture was swabbed on the surface of the agar media and further well was prepared using well cutter. The purified protein sample (100 μl) was serially diluted in 900 μl of buffer (10-1 to 10-4 dilutions). The undiluted and diluted samples (100 μl) were loaded into the well. The plates were incubated at 37ºC for 18-24 hours and examined. The diameter of the zone of inhibition was measured.

Lowry’s method was used in determination of protein concentration [5]. One ml of cell free culture supernatant of actinomycete and 5 ml of alkaline sodium carbonate reagent were taken in a test tube and mixed well. It was incubated at room temperature for 10 minutes. 0.5 ml of Folin-Ciocalteau reagent was added to this and incubated at room temperature for 30 minutes. The optical density was measured at 660 nm. Bovine Serum Albumin (BSA) solution (1 mg/ml) was used as standard.

The high performance liquid chromatographic (HPLC) separation of antibacterial bioactive compound was carried out on a LC-10 AT vp model HPLC using 250 × 4.60 mm Rheodysne column (C-18). Qualitative analysis was performed by solvent mixture of petroleum ether: acetone (19:1, v/v) as mobile phase and the development was observed under ultraviolet lamp. It was read at 280 nm.

Four elutes were obtained by performing HPLC was subjected to protein estimation by Lowry’s method.

The purified protein was determined for its antibacterial activity by well diffusion method. Muller Hinton Agar was poured on petriplates and overnight of bacterial pathogens broth culture was swabbed on the surface of the agar media and further well was prepared using well cutter. The four elutes (100 μl) were added in each well. The plates were incubated at 37ºC for 18-24 hours and examined. The diameter of the zone of inhibition was measured.

SDS-PAGE analysis: The purified protein was subjected to SDSPAGE Analysis.

Characterization of the actinomycete kpr-i3 strain

The potent antagonistic strain KV3 was identified by their microscopic and biochemical characteristics. The result revealed that the KV3 isolate belongs to Streptomyces species.

The crude extract of Streptomyces species was mixed with saturated ammonium sulphate and kept overnight at 4°C then centrifuged. Then the precipitate is dialyzed overnight using pretreated dialysis bag to get the partially purified protein.

Determination of antibacterial activity of protein

The antibacterial activity was determined by well diffusion method. The partially purified protein sample was serially diluted in the buffer and then loaded into well. Each dilution showed their activity against the pathogens. The undiluted sample showed the maximum zone inhibition against all pathogens. 10-1 dilution showed the activity against most of the pathogens except Pseudomonas spp. and Salmonalla spp. The maximum growth of activity against Vibrio harveyi (17 mm) followed by Streptococci spp. (13 mm), Proteus spp. (10 mm), Aeromonas hydrophila (10 mm), Pseudomonas aeruginosa (10 mm), Vibrio alginaticus (9 mm), Klebsiella spp.(8 mm) and Bacillus subtilis (8 mm).

The amount of protein present in the sample was estimated by Lowry et al. [5] method. The graph obtained from this experiment clearly showed the quantity similarity between the protein standard BSA and crude extract of Streptomyces.

The protein content of the working standard BSA was equal to that of crude extract of Streptomyces up to a concentration of 45 μg/ml.

12.5% SDS-PAGE analysis of the crude extract of Streptomyces was made and bands observed were at a molecular weight of 29 KDa.

The quantified protein was subjected to HPLC analysis at conditions of pressure (1.267) with flow rate of 1.5 where the mobile phase is 0.1% Phosphoric acid with pH 4, which gave a higher peak at 1.65 retention time. The results were showed in Figure 1.

The four elutes obtained by performing HPLC was then subjected to protein estimation. The protein content was maximum in the Elute 2 (0.00174 mg/ml) and the minimum in Elute 4 (0.00129 mg/ml). The protein content of elute 3 and elute 4 is 0.00148 mg/ml. The results were tabulated in Table 1. 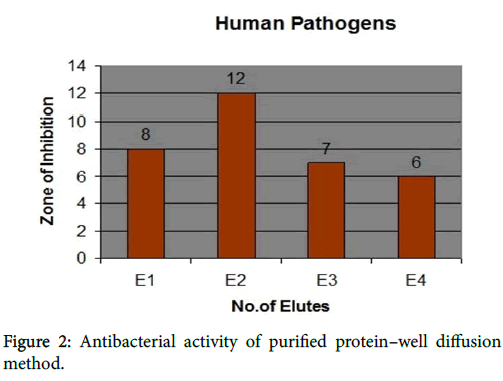 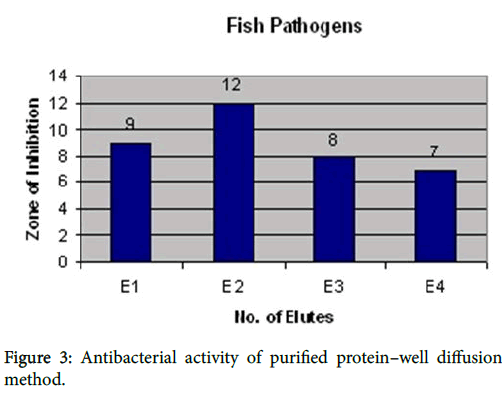 A total of 6.2% SDS-PAGE analysis of the purified extract of Streptomyces was made and bands observed were at a molecular weight of 15 KDa.

Actinomycetes have been recognized as the potential producers of metabolites such as antibiotics, growth promoting substances for plants and animals, immuno modifiers, enzyme inhibitors and many other compounds of use to man. They have provided about two- thirds of the naturally occurring antibiotics discovered, including many of those important in medicine, such as aminoglycosides, anthracyclines, chloramphenicol, beta lactams, macrolides, tetracyclines etc., [6]. The bioactive compound of protein was purified [7]. The partially purified bioactive substance is subjected to antimicrobial activity, which showed high zone of inhibition ranging from 21 mm to 12 mm. The partially purified protein was then estimated [5] to quantify its amount from the crude extract of Streptomyces used.

Dharmaraj [8], reported protein profile of seven strains showed different showed different bands of molecular weight ranging from 9 to 80 KDa. In the present study, the protein profiling was to identify the strain that exhibited bioactivity. The protein profile of the strain showed a band of molecular weight nearly 29 KDa. Proteins can be analyzed either by using one dimensional or two dimensional protein electrophoresis. Many strains can be compared rapidly with 1 KDa of protein electrophoresis.

High Performance Liquid Chromatography result confirmed that production of colorless protein. The result of present findings correlate with the previous findings of light induced carotenogenesis in Streptomyces species [9]. The four elutes obtained from High Performance Liquid Chromatography analysis, antimicrobial activity were tested against the human and fish pathogens previously used. The elute 2 showed maximum zone of inhibition in human and fish pathogens. The purified sample when tested for antimicrobial activity showed zones but little lesser in size. This is due to the changes occurring in the strain during purification [10]. Again the elute 2 showed the bands of 15 KDa which shows contrast with partially purified protein obtained earlier.

The isolated strains were identified based on their morphological, cultural and biochemical characteristics. Totally thirty actinomycetes species were isolated and used for antibacterial activity. Out of thirty actinomycetes species, Streptomyces spp., showed the best level of antibacterial activity against human and fish pathogens. The bioactive compound protein was partially purified and tested for antibacterial activity. The partially purified bioactive compound was subjected for SDS-PAGE for protein profiling and band of 29 KDa was obtained. The partially purified protein was allowed for High Performance Liquid Chromatography analysis gave a higher peak at the retention time of 1.65. Four elutes were obtained from High Performance Liquid Chromatography analysis and were tested for antibacterial activity against human and fish pathogens. This showed the high activity in elute 2. The purified protein again subjected to SDS-PAGE analysis and showed the band of 15 KDa.