Muscular strengthening is a kind of training complementary to dynamic training and its purpose is to improve patient’s function, to correct amyotrophy and maybe to obtain more benefits in terms of physical capacity. This kind of training is recommended in cardiology (coronary disease, heart failure) but also in pulmonology, oncology, etc.
The challenge of rehabilitation is to propose training modalities that should be functionally efficient while limiting the hemodynamic effect.
Thanks to a continuous non-invasive technique we were able to measure heart rate, blood pressure and cardiac output during usual resistance training modalities. We were therefore able to prove that the “ideal hemodynamic-functional compromise” is to perform 3 shorts sets (10 rapid repetitions) with high loads (75% 1-RM), avoiding Valsalva and with a minimum time of recuperation of at least 1 min in-between the sets.

A lot of patients present a decrease of their muscular potential. Muscle degradation, amyotrophy, is linked to the disease itself (heart failure–augmented catabolism; COPD–hypoxia; some type of cancer) but also to the treatment (corticosteroids for transplant patients, COPD or for some oncology treatment) or “simply” to deconditioning.

Quantitative modifications (muscular mass or volume) but also qualitative alterations (kind of fiber, developed strength for 1 cm2 of muscle) have clearly been reported, notably in heart failure patients [1]. Patients that are bedridden during some days or several weeks can also be touched by amyotrophy and the only solution to reverse this effect is to perform adapted exercises. These mechanisms are well described in what is called “the muscular hypothesis” concerning the effort limitation in heart failure [2] and COPD [3,4]. Many studies show that the inclusion of resistive training in rehabilitation programs allows not only strength increase, but also empowered effects on VO2 max [5,6]. It seems that the more the patient is deconditioned, the more he will improve his VO2 thanks to a specific muscular training. Conversely, if the subject already has a good exercise capacity (high VO2), a resistive program will not have a great impact on his VO2 [7].

Evaluation of the patient’s cardio-vascular response to such training is often limited to continuous monitoring of HR and discontinuous monitoring of blood pressure (BP). Blood pressure has often been measured within 10 to 30 sec after exercise cessation. All the studies monitoring continuous BP underlined the importance of the BP decrease directly after the last eccentric contraction. Other cardio-vascular parameters like stroke volume (SV) and derivate parameters (cardiac outputs (CO), rate pressure product (RPP) have never been studied, to our knowledge, during classical RT modalities in cardiac rehabilitation [8-11].

Experts in this field know well the general modalities allowing an optimal functional improvement. As a reminder, in untrained people or patient, load should be ideally superior to 40% of 1-RM (repetition maximum: the maximum amount of weight that can be lifted once in the full range of movement) repeated until exhaustion, in order optimized the recruitment of motor unit of a muscle. It is necessary to perform 1 to 5 sets of 5 to 25 repetitions, depending on the imposed load to lead to “exhaustion”. Major muscle groups should be worked out according to deficits [12].

The majority of our tests were performed on a classic quadriceps chair (leg extension from Technogym ROM, Italy) in a sitting position. The Task Force Monitor (CNSystems, Austria) is a non-invasive continuous measuring device who allows to obtain instantaneous heart rate (HR), blood pressure (BP) and stroke volume. Cardiac output and double product are calculated as well starting from these parameters. This system underwent a validation process.

Presented results are obtained in coronary patients. They did not have an important alteration of LVEF (>50 %), neither an injury that could alter their effort capability. The average group age is around 60 years old. All patients were involved in a rehabilitation program for at least one month. Patients were tested with their usual medication. All subjects signed an agreement form approved by the local Ethic Review Board (Detail are presented in our original papers).

All tested modalities are inspired by the modalities proposed in the literature. To avoid confounding effect, we isolate characteristics one by one (intensity, speed) and we control the total volume of each comparison.

The subjects were asked not to train 48 h before the tests.

The TFM® system was set after positioning the subject on the leg extension device. Subjects did warm-up exercises (3 sets of 15 repetitions) and their 1RM was determined by progressively increasing the weight lifted (step of 5 Kg). To avoid Valsalva maneuver, the subjects were asked to exhale on the concentric phase and inhale on the eccentric phase. Subjects then rest for at least 10 min in order to reach the initial SV, HR and BP levels.

Even if plenty of authors agree to underline the importance of muscular strengthening, there are still a lot of concerns regarding the hemodynamic impact generated by this kind of rehabilitation [11,13]. Indeed, training should be efficient on a functional plan but it should also avoid any cardiovascular overload, notably major blood pressure elevation. The challenge is to determine ideal modalities in order to obtain a functional gain while avoiding cardiovascular overload.

The ideal number of sets to perform is still subject to discussion. Different meta-analysis suggests that the “beginner” will have a better progression by performing 3 sets. The more the person trains, the higher the number of sets to keep progressing.

However, actual literature shows that in order to develop strength and power the more important is intensity against the number of sets [14-17].

Load must be between 40 and 80% of 1-RM in order to achieve functional improvements. As maximal tests on every device require a lot of time, we generally employ the 10-RM technique. This means the load that the subject is capable of lifting 10 times in a row with difficulties. We know that that load represents approximatively 65 and 75% of 1-RM [12,18-20]. Many clinical trials performed on a population similar to the one that follows rehabilitation; show that functional gains are comparable as long as total lifted loads are equivalent (number of lifted Kg at the end of X sets of Y repetitions) [6,11,13,19]. As different combinations of « load x number of repetitions » are equivalent as long as the global lifted load is the same, what about the hemodynamic response? By measuring heart rate and blood pressure in a continuous and non-invasive way during muscular strengthening, we have shown that for a total equivalent work, the utilisation of heavier loads combined with a reduced number of repetitions (3 x 10 x 75% MVC) produces a reduced hemodynamic constraint compared to lighter charges lifted more times (3 x 17 x 45% MCV) (Figures 1 and 2). These results have been obtained in both healthy subjects and patients undergoing cardiovascular rehabilitation [21,22]. 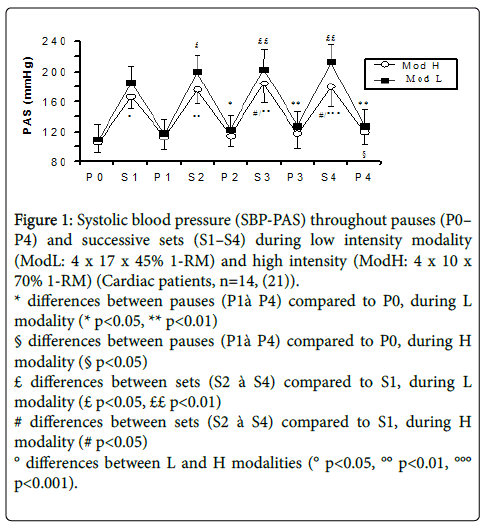 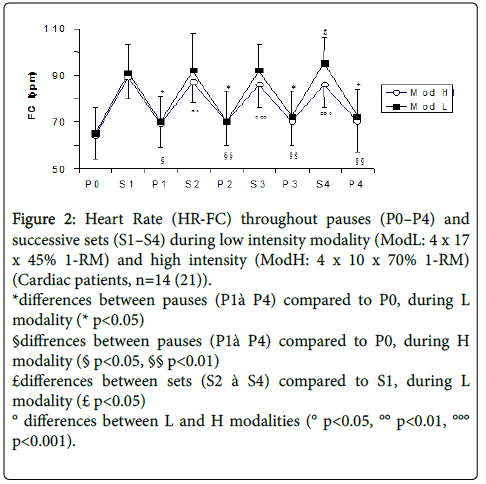 In the literature, rest time between successive sets of muscular strengthening exercises varies from 30 sec to 3 min. Energetic substrate restoration after a set of contractions performed till exhaustion might take up to 5 min. By using the above mentioned methodology, we were able to show that a recovery time between 60 and 90 sec among successive sets (3 sets of 10 repetitions at 75% of 1-RM) is essential for hemodynamic parameters to get back to rest values (Figure 3). These findings have been observed in both healthy individuals and patients undergoing cardio-vascular rehabilitation [23,24]. Execution speed imposed by studies or rehabilitation centers during muscular strengthening are really different. It could vary between 1 sec (concentric phase), 1 sec (eccentric phase), 2 sec–2 sec, 2 sec–isometric phase of 2 sec–2 sec, and until 6 sec for each phase.

Numerous publications clearly show that working at a higher execution speed cause greatest benefits on a functional level [20,25,26].

Always using the same methodology, we measured the hemodynamic response during equivalent modalities of muscular strengthening exercises (3 sets of 10 repetitions at 75% of 1-RM, 1 min of rest in-between sets) performed at 3 different rhythms. We observed that hemodynamic constraint is all the more important as execution speed is slow (Figure 4). By measuring intra-thoracic pressure in our patients, we also noted a greater number of Valsalva maneuvers during “slow” speed work. Moreover, exercise was felt as more trying (Borg scale at the end of 3 sets). The more important hemodynamic response can be explained by a longer duration of sets (10 movements performed slowly versus 10 movements performed quickly), and a higher number of Valsalva maneuvers. 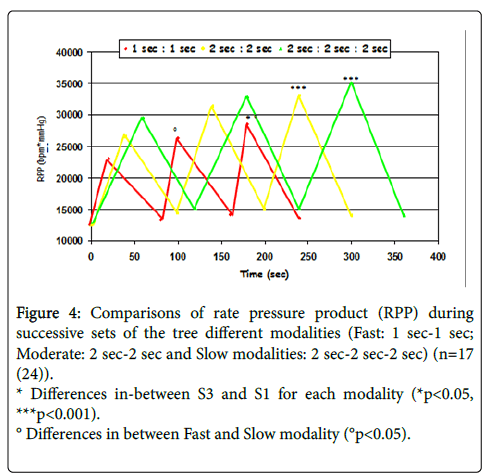 The rising of intra-thoracic pressure that accompanies Valsalva maneuver, has a considerable influence on blood pressure. Narloch J & Coll [27] compare different situations (rest and effort), they attest this influence and observe that during leg extension at leg-press station (100% 1-RM) systolic and diastolic blood pressure are 311/284 mmHg during Valsalva maneuver, while they just rise at 198/175 mmHg for the same exercise perform at slow expiration [27,28]. Respiratory monitoring during training is hence really important in our work.

From different data collected, we can say that in order to obtain an efficient modality on a functional level (optimal power gain) while limiting the amplitude of the hemodynamic response, 3 sets of 10 repetitions at 75% of MCV should be quickly performed. Rest time in-between sets should be 1 min at least and Valsalva maneuver should be avoided.

Muscular strengthening is an integral part of rehabilitation programs whether in cardiology or pulmonology field, but also more largely in transplantation, oncology or geriatrics.

It is convenient to find a compromise between efficient modalities on a functional level by avoiding any cardiovascular overload. A judicious choice of modality can significantly reduce hemodynamic response. We need other work to clarify the hemodynamic responses during other type of exercise, other modalities and other population.

Copyright: © 2017 Lamotte M, et al. This is an open-access article distributed under the terms of the Creative Commons Attribution License, which permits unrestricted use, distribution, and reproduction in any medium, provided the original author and source are credited.