Copyright: © 2017 Mohmed F, et al. This is an open-access article distributed under the terms of the Creative Commons Attribution License, which permits unrestricted use, distribution, and reproduction in any medium, provided the original author and source are credited.

The present work discusses the growth optimization and magnetic properties of the Cerium doped Yttrium Iron Garnet (YIG) thin films grown through Pulsed Laser Deposition technique. The X-ray diffraction (XRD) reveals the highly crystalline, Single Phase, nature of films and the Atomic Force Microscopy (AFM) shows the films are very smooth, with root mean square roughness of less than 1 nm. Thickness of the films as calculated from the X-ray reflectivity (XRR) was found to be around 17, 35, 52, 70 and 122 nm. The Magnetic measurement shows the increase in the Saturation Magnetization, in the cerium doped YIG, but as the growth time increases, we observed a decrease in magnetic Saturation. The decrease in saturation magnetization arises due to the formation of residual Ce2O phase in the longer grown films. Longitudinal Spin Seebeck Voltage signal was observed in the films and the Platinum (Pt) deposited over the Cerium doped YIG film showed no sign of Pt magnetization.

Yttrium Iron Garnet (YIG), has been a highly promising ferromagnetic insulator in the field of microwave sensors, from past many decades because of is large Faraday constant and very low Magnetic damping. Because of these properties YIG is taking its place in the study of Spin waves, Magneto Optic effect and Magnetic Insulator Based Spintronics [1-3]. YIG has a Cubic lattice structure with lattice constant of 12.376 A, and shows cubic Magneto-crystalline anisotropy with easy axis along (111) direction. The insulating property makes it an ideal candidate for the study of Inverse Spin Hall Effect [4,5], Spin Seebeck Effect [6-9] and pure spin currents [10-12]. In recent years, with the development in microwave technology, Yttrium iron garnet (YIG), cerium-substituted YIG, and bismuth-substituted YIG have engendered substantial interest in spintronics research because of their extraordinary properties like high transparency, large Faraday rotation and excellent magneto-optical characteristics [13,14]. Yttrium iron garnet (YIG) finds numerous applications especially in microwave filters [15,16], microwave sensors [17,18], magneto-optic isolators in telecommunication devices [19,20] etc., due its low magnetic damping, soft magnetization behavior, energy band gap of 2.66 eV, good insulating performance and remarkable combination of low absorption in the optical and near-infrared wavelength region and magneto-optic Faraday effect (FE) [13]. Among the wide variety of applications, several studies revealed that the cerium doped YIG epitaxial films synthesized by liquid phase epitaxy (LPE), traveling solvent floating zone (TSFZ) method, pulsed lase deposition method (PLD), radio frequency (RF) sputtering and the floating zone method using YAG laser heating, enhances the Faraday effect (FE), minimizes optical loses, displaying excellent performance in near-IR wavelength region and maintains its electrical insulating property without much alternation in magnetic moments [21-24]. In the present study, we explore the crystallinity, surface topography and magnetic characteristics of cerium doped YIG thin films (5 mm×5 mm) deposited by pulsed laser deposition method on gadolinium gallium garnet (GGG) substrates in relation to the deposition time and film thickness. A prominent variation in the properties has been observed which have been investigated in detail. The Longitudinal Spin Seebeck voltage signal measurements have also been carried out after depositing the Platinum (Pt) layer over the Cerium doped YIG films.

Thin films of YIG and cerium doped YIG (Ce.6Y2.4Fe5O12) have been deposited using pulsed laser deposition technique (PLD) on gadolinium gallium garnet (GGG-111) substrates from mixed powder targets of cerium oxide (Ce2O), ytterbium oxide (Y2O3) and iron oxide (Fe2O3). All the materials are of high purity (99.99%) and were used as such without any further purification. The powdered mixture of the precursors of stoichiometric weights were grinded to a fine power in ball milling using zirconium oxide (ZrO2) balls in a vacuum atmosphere for about 24 hours. The finely grinded powdered mixture was casted into the pellets of 1-inch diameter using cold press followed by sintering at 1400°C for about 12 hours. For the deposition of YIG and CeYIG thin films, the optimum growth conditions were established by maintaining a substrate temperature of 900°C, oxygen pressure of 6.67×10−3 mbar (5 mtorr) and using a krypton fluoride (KrF, λ=248 nm) laser of pulse energy 120 mJ at a repetition rate of 10 Hz, so that a growth rate of around 3.5 nm/min, could be achieved. Once the deposition process was accomplished the films were allowed to attain the room temperature at a ramp rate of 10 degrees per min until the substrate reaches the room temperature, when the heater was turned off. The substrate to target distance was kept at 7.5 cm for all the films in order to achieve the smooth and uniform film growth. Excitu annealing was carried only for pure YIG film using Rapid Thermal Annealing (RTA) in an ambient oxygen flow at 850°C for 300 Sec. A 10 nm Platinum (Pt) film was deposited on the characterized films using magnetron sputtering.

For phase, purity and film structure x-ray diffraction (XRD) pattern of the YIG and CeYIG thin films were recorded using Rigaku rotating anode high brilliance (RU-200BH, serial-L17171) diffractometer equipped with Cu Kα (λ=0.15141 nm) (Mo Kα {λ=0.071 nm} for XRR) radiation operated at 60 kV and 200 mA. The XRD pattern shown in Figure 1, over 2θ range of 40-120 degrees, reveals two prominent peaks at 51.11° and 119.09° corresponding to (444) and (666) planes of GGG and CeYIG demonstrating extremely aligned growth of CeYIG on GGG substrates. No other prominent peak corresponding to any impurity could be ascertained revealing the high phase purity of the samples. The film thickness as calculated from the X-Ray reflectivity (XRR) data comes out to be 17.5 nm, 35 nm, 52.5 nm, 70 nm, and 120.5 nm respectively, by using Debye-Scherer formula

, where k is the shape factor (0.9), λ is the wavelength of the x-ray radiation (λ=1.5406 Å), θ is scattering angle, and β represents broadening of the diffraction line peak at an angle of 2θ, at half its maximum intensity (FWHM) in radian [25]. It is obvious that the crystallite size and crystallinity of the films increases as the deposition time increases from 5 to 35 minutes. 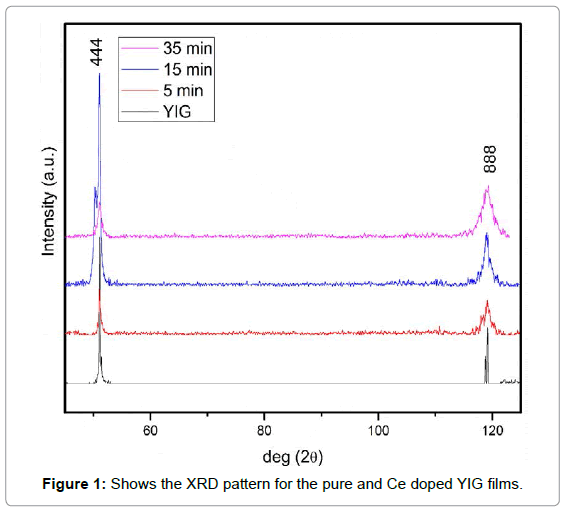 Figure 1: Shows the XRD pattern for the pure and Ce doped YIG films.

The surface morphology study was carried out using Asylum 3d- PF Atomic Force Microscope by Oxford Instruments. Figure 2a and 2b displays the AFM images for the Ce doped YIG film we can observe highly smooth, droplet free surface. The root mean square (rms) roughness of the films as obtained from the AFM is given in the Table 1. The root mean square roughness has increased with film thickness but has remained below 1 nm. Figure 4: Anisotropy hysteresis for the 70 nm and 122.5 nm cerium doped YIG films (Inset shows the anisotropy as obtained from MOKE).

In order to observe the Longitudinal Spin Seebeck effect (LSSE) Voltage, a setup needs to be designed wherein we can provide a stable temperature gradient along the longitudinal direction ΔT, a varying magnetic Field

and an instrument to measure the low voltage signal [33]. Figure 5a shows the design of the setup used to measure the LSSE signal in our lab. The stable temperature gradient was provided by two Peltier elements whose temperature was monitored and controlled by using Pt-100 sensors. The Helmholtz coil was used to provide a varying magnetic field. The Spin Seebeck voltage signal generated in the film was measured using a nano Keithley 2182/A nano voltmeter. When a temperature gradient of 10 degrees was maintained between the top Pt layer and the bottom GGG substrate, by sandwiching the film between two Peltier elements, under the influence of a magnetic field of 100 Oe, a weak Spin Seebeck voltage signal was observed. When the direction of the magnetic field was reversed, the signal direction changed to negative, implying that the generated signal is spin Seebeck voltage. In order to further verify that the signal generated is from the Ce doped YIG and the Pt has not been magnetized, generally known as the magnetic proximity effect[34], the Magnetoresistance (MR) measurement on the Pt film was carried out, using Quantum Design Physical Property Measurement System (PPMS). The Figure 5b shows the room temperature MR vs. H data for the GGG/CeYIG/Pt film. No signs of MR effect was observed in the films, implying that the signal observed is from the spin Seebeck effect in the Ce doped YIG film and the Pt has not been magnetized [35]. 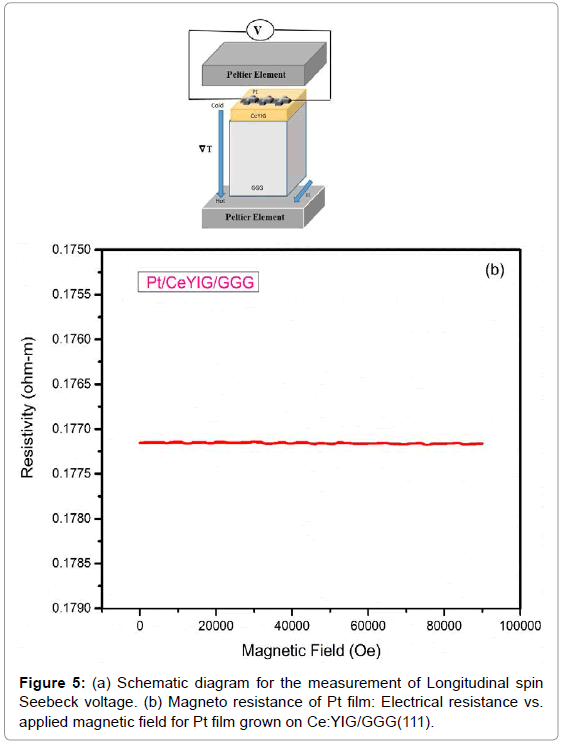 Figure 5: (a) Schematic diagram for the measurement of Longitudinal spin Seebeck voltage. (b) Magneto resistance of Pt film: Electrical resistance vs. applied magnetic field for Pt film grown on Ce:YIG/GGG(111).

In summary we have obtained a higher magnetic saturation in Ce doped epitaxial pulsed laser deposited YIG films. The films are single phase with very low roughness (with rms <1 nm).The Ce doped YIG films show a saturation magnetization of around 180 emu/cc (5% error),with in-plane easy axis, but as the growth time increased beyond 30 minutes, we observed a dip in saturation magnetization, which occurs due to formation of residual CeO2. More over the magnetoresistance measurement of Pt/CeYIG/GGG indicates that the Pt deposited over CeYIG has not been magnetized.