Copyright: © 2015 Mondal K, et al. This is an open-access article distributed under the terms of the Creative Commons Attribution License, which permits unrestricted use, distribution, and reproduction in any medium, provided the original author and source are credited.

Marine shrimp (Penaeus monodon) is one of the major candidate species for export oriented aquaculture which dominates the seafood market in regions of European Union, Southeast Asia and USA. Carotenoid rich seafood has now become one of the important criteria in determining the quality of the product to be exported. Recent trends in supplementing fish diets with natural pigment source is an alternative to the utilization of expensive synthetic pigments. In this context, green seaweed Enteromorpha intestinalis was selected as a source of carotenoid for inclusion in the formulated diet of Penaeus monodon. Astaxanthin being an important category of carotenoid pigment was monitored in shrimp muscle tissue during the feeding trial. Significant variation (p<0.05) was observed between the experimental groups as confirmed through ANOVA thus exhibiting higher astaxanthin content of shrimps (18.70 ± 4.48 ppm) fed with seaweed incorporated diet as compared to control (15.80 ± 2.33 ppm). The present experiment therefore emphasizes on the quality improvement of aquaculture product through dietary inclusion of seaweed as a source of astaxanthin.

Inclusion of algae as dietary supplement in animals have been investigated by researchers for years as a source of pigment [1]. In context to aquaculture, the effects of dietary inclusion of algae have resulted in improved performance including better animal product quality [2-4]. To be more specific the commercial production of shrimps and prawns as an edible item represents one of the fastest growing areas of aquaculture [5] with high consumer appeal and attractive market due to their body colouration or pigmentation which is a direct measure of its body astaxanthin content. Carotenoid utilization by various aquatic species is well documented since it plays a regulatory role in providing antioxidant and pro-vitamin ‘A’ activity, enhancing immune response, improved reproductive performance, growth, maturation and photo-protection [6]. These natural compounds also help the species to combat against stressful environment [7]. Algae and higher group of plants are the major producers of carotenoid which comprises a family of over 600 natural fat soluble pigments [8]. Studies reveal that alternative utilization of plant pigments in formulated diets have improved the body pigmentation of farmed crustaceans, particularly penaeids in order to achieve better market price [9,10].

Therefore the present work is an attempt to utilize E. intestinalis as a natural astaxanthin source for farmed tiger shrimp (Penaeus monodon) in relation to its quality improvement.

Collection of seaweed and preparation of experimental diets

Live and healthy E. intestinalis was collected from Bali Island (22°04’35.17’’ N latitude and 88°44’ 55.70’’ E longitude) of Sundarbans mangrove eco-region during low tide condition. The collected material was rinsed in ambient water and then with distilled water, oven-dried at 50°C and finally processed to make powder. Experimental diet was formulated through incorporation of the particular seaweed (Diet ENT) at a level of 5%. Simultaneously a control diet (Diet C) was also formulated to study the comparative performance (Table 1).

A feeding trial was run at experimental aquaria for 90 days of duration. Shrimp juveniles were procured from hatchery and stocked in aquaria at a density of 2 individuals/m2. Experimental diets were randomly assigned, the shrimps were fed twice daily and the uneaten feed was checked at regular intervals.

The astaxanthin content was analyzed according to the standard spectrophotometric method [11]. Its value in % was converted to ppm level for easy interpretation of data. The body colouration of shrimps after boiling was compared with Roche SalmoFan™ colour score.

The collected data were finally subjected to one-way analysis of variance (ANOVA). All statistical calculations were performed with SPSS 9.0 for Windows.

The astaxanthin content in muscle tissue was higher in shrimps fed with Diet ENT as compared to Diet C throughout the feeding trial (Figure 1). A darker orange-red colouration was observed in shrimps fed with Diet ENT after boiling them in water for 5 minutes when compared with Roche SalmoFanTM colour score. The colour score was 30 for Diet ENT fed shrimps whereas a score of 27 was recorded from shrimps fed with Diet C. ANOVA results showed significant variation (p<0.05) in average astaxanthin contents which may be attributed to the capability of P. monodon to easily convert the fraction of seaweed astaxanthin into tissue astaxanthin. The seaweed sample selected for the investigation is found to contain ~120.78 ppm astaxanthin as reported from the present study region [12-14]. Carotenoid, particularly astaxanthin content of feed is one of the major factor influencing the colour development in animals [15] but at the same time scientific knowledge about several factors like dietary pigment source, their dosage level, feeding duration, dietary composition and magnitude of carotenoid esterification is also required to identify these interaction processes [16-20]. The study showed significantly different astaxanthin content of the shrimp species which are in agreement to the observations that crustaceans exhibit strong tendency towards selection of specific carotenoids at a specific rate for their metabolic absorption [16]. Similar work conducted from the present study region reveal that P. monodon when fed with diet containing red algae Catenella repens at a level of 5% improved the body astaxanthin content [21]. The search for natural astaxanthin was not only limited to the seaweed resources, rather salt-marsh grass Porteresia coarctata was also tested as a natural dietary astaxanthin source in P. monodon feed with better results from the present geographical locale [12,22]. In continuation, such natural carotenoid supply to the diet of shrimps has been studied for P. japonicus and Litopenaeus vannamei too from different parts of the globe. The ingredients of natural origin that have been used in the diet are red yeast (Phaffia rhodozyma) and microalgae Dunaliella salina [23]; Chnoospora minima [24]; Spirulina sp. [25,26]; Haematococcus pluvialis [26] and Isochrysis galbana [27]. An usual trend of marked increase in the body carotenoid content has been observed when organisms were fed with plant pigment source diets. For e.g. feed supplemented with 50 ppm algal material (Dunaliella salina) improved the body colouration of P. monodon [28]. Three types of diet when provided to P. semisulcatus containing natural carotenoid sources like red pepper and marigold flower resulted in higher carotenoid accumulation in body tissues [29]. However researchers from Mexico also reported that feed incorporated with cultivated green alga Ulva clathrata significantly improved the body pigmentation of farmed shrimp L. vannamei [30]. 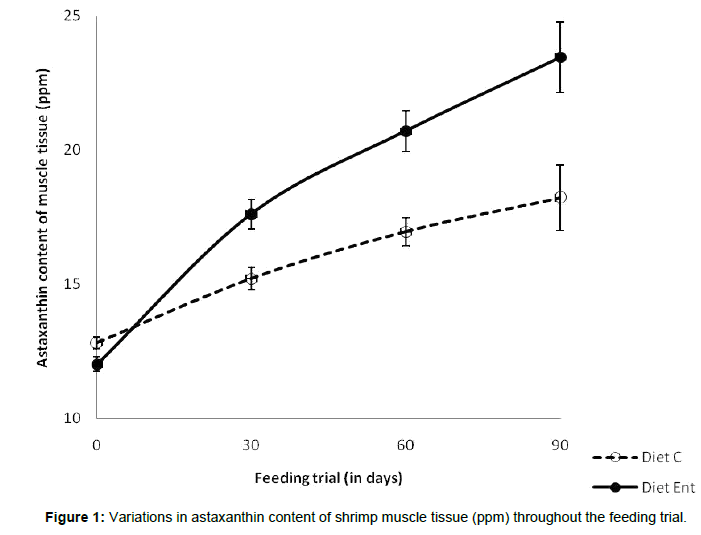 Improved product quality of P. monodon clearly reflects the transforming potential of algal astaxanthin into the body tissues by the particular culture species. Thus the present study provides a baseline information about the natural astaxanthin pool of Sundarbans mangrove eco-region which may serve as an alternative to synthetic astaxanthin in animal diets that are much more expensive in terms of costing.

The authors would like to acknowledge Department of Science and Technology, Govt. of India for providing financial assistance.