Copyright: © 2015 Olalekan EI, et al. This is an open-access article distributed under the terms of the Creative Commons Attribution License, which permits unrestricted use, distribution, and reproduction in any medium, provided the original author and source are credited.

Crabs are decapods in the brachyuran infra order. The family comprises more than 14,750 species known for their ten legged creature (decapod). They are physiologically and structurally diverse across marine and freshwater environment. Their importance are diverse, this type of decapods are used as biological models and are highly edible for consumptions [1,2]. Crabs have flourish to be a predominant icon in the invertebrate fauna because of their ubiquitous in some part of the world including marine, freshwater and terrestrial environment [3]. The crab fisheries are also predominant in the marine, coastal, freshwater and lagoon fishery [4]. According to Geist et al., [5] crabs are known as ecosystem engineers due to their ability to burrow into sediment structures. These enhance sediment aeration and improve the biodiversity of surrounding vegetation associated to the mangrove environment. The size and growth of crabs are important ecological indicators, which can monitor the abundance of the crab species in the mangrove ecosystem. The ranges of their significant sizes expose the richness of the habitat with nutrient [6]. In Nigeria, Geryon maritae (Deep water crab), Ocypode africana (Ghost crab), Goniopsis pelii, and Sesarma sp. (Mangrove crabs), Uca tangerii (Fiddler crabs), Callinectes latimanus, C. amnicola, C. pallidus and C. marginatus (Swimming crabs), Cardiosoma armatum and Gecarcinus weileri (Land crabs) are common crab species found in brackish and marine environments [7]. The mangrove crabs have been found in mangrove habitat of the Lagos Lagoon. They have been subjected to reclamation by anthropogenic activities. However, this has played ecological role and significantly modify the mangrove ecosystem. The crabs have also been instrumental to clean up the environment by feeding on the fallen leaves [8]. Their environmental cleaning qualities are important with the omnivorous feeding attribute, depending on plant and animal [9]. According to Turner et al., [10] these mangrove land crabs developed burrows, which have strength for at least five years with temperature stability and high humid medium. The burrows are great soil nutrient improvement agents and enhance plant seedlings production. Cardiosoma is a genus of Land crabs. Young individuals are often very colorful with a purple-blue Carapace and orange-red legs, exhibit color change as old age is reached [11]. There have been difficulties in the classification of these two crabs. Measurement of the size-frequency is one of most widely used method for growth pattern especially in the wild. This method gives more information about the ecological status of the species in the mangrove habitat [2]. The mangrove of the Lagos lagoon plays an important role on the diversity of the crab species, though various impacts have pose alarm on the environment which also affects the distribution of other important fauna and flora community of the ecosystem. The aim of this research is to provide baseline information on the relevance of using size and growth of Cardiosoma armatum and Cardiosoma guanhumi as ecological parameter of mangrove ecosystem and make comparison of the population differences based on morphological analyses of the two crab’s species: Cardiosoma armatum and Cardiosoma guanhumi.

The study site for this project is the coastal and mangrove area of University of Lagos Lagoon front, located opposite the Lagos Lagoon, with the geographical platform of 6°26’N and 6°39’N and longitude 3°29’E and 3°50’E (Figure 1). The lagoon is the largest of the four lagoon systems of the Gulf of Guinea and is located at South Western Nigeria. The mangrove swamp connects to the Lagos lagoon by tidal creek [12]. The Crab species (Plates 1 and 2) were collected at the mangrove part of the Lagos Lagoon along University of Lagos using the removal method [5]. They were caught between 7 pm and 11 pm. The collection was done randomly over a period of six months between February and July, 2012. The crabs were collected at two different stations within the mangrove swamp. A total of 858 crabs were collected from the site and were preserved immediately in a deep freezer in the laboratory prior to examination. The crabs were removed from the freezer and allowed to thaw. Excess water was removed from the specimens using filter paper. The carapace length and width of the two crabs was measured using a Simple vernier caliper. Total weight, weight of left and right chelipeds were measured to the nearest tenth of a gram using Sartorious Top Loading Balance (Model 1106); the results were recorded in a proformer for each specimen before dissection. The relationship between the carapace length-frequency distributions was established for each month and the cumulative (summary for the six months) worked out. Specimens were collected randomly in each of the six months. The crabs were examined to obtain their size composition and abundance. For the growth pattern, data of the length-weight relationship and width-weight relationship were compiled. The carapace length-weight relationship was expressed based on Rickter, [13] with the following equation: 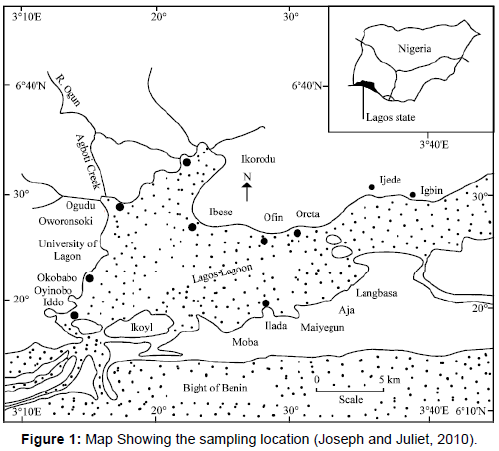 Where W=weight of crabs in grams.

L=length of the carapace in cm.

The equation was transformed to a linear relationship as

Table 2: The frequency distribution of Carapace length and width of Cardiosoma armatum and Cardiosoma guahunmi from Lagos lagoon mangrove swamps in Nigeria (February to July, 2012).

Where, W=Total weight of crab in grams (g)

The value of length-weight relationship for C. armatum and C. guanhumi are given as follows;

The Total length-weight relationship for Cardiosoma armatum of the least square common fit of the transformed data got the following linear equation.

The values of b were less than 3 in both sexes of Cardiosoma armatum which also indicated a positive isometric growth. The values were 0.4573, 0.2205 and 0.3378 for male, females and combined sexes respectively.

The carapace length-weight relationship for Cardiosoma guanhumi of the least square common fit of the transformed data gave the following linear equation;

In each row, means with a common letter are not significantly different (P > 0.05).

Table 4: T-test of Right and Left Chelae for Cardiosoma armatum and Cardiosoma guahunmi from the Lagos Lagoon mangrove swamps in Nigeria (February- July, 2012).

The assessment of the size and growth pattern of the Hairy Mangrove Crab, Sersema huzardii was examined by Lawal-Are and Nwankwo [4] in the Lagos Lagoon mangrove area. The length of the carapace ranged from 1.5 cm to 4.7 cm which is low when compared to 2.5 to 9.5 cm of the present study for both species under consideration. Both Sersema spp and Cardiosoma spp are both mangrove crabs; however Sersema spp are smaller in size than Cardiosoma spp. The biology and distribution of some Mangrove Crabs in the Wouri River Estuary of Douala in Cameroon was studied by Ngo-Massou et al., [14] some Cardiosoma species were also studied, carapace length and width ranges from 3.6 -9.79 cm and 4.49 -13.13 cm respectively. These values are smaller than the Cardiosoma spp studied in this research, which is due to the abundance of trees and the richness of the mangrove ecosystem of University of Lagos Lagoon front of the Lagos Lagoon. The two crabs show high chela weight, which is in accordance with the body weight. This is in relation to Sneddon, Huntingford and Taylor, [15] that there is a great relationship between the chela size and the body weight, the chelae influences the contest between crabs in the same habitat. Akin-oriola et al. [3] also reported the maximum carapace length of 6.0 cm for Cardiosoma armatum and 7.0 cm for Callinectes pallidus respectively from Badagry creek. There was only one predominant generation of crabs sampled and they belong to the same year of class in their first year of life. It was observed that there was very low distribution in the 8.5-9.4 cm (1.9%) of Cardiosoma armatum, which is in contrast to Hartnoll et al. [16] of the mangrove crab of Johngarthria lagostoma with the size 90-80 cm size group. The ranges in the data obtained were due to the collection methods of the crabs, differences in the habitat terrain and topography of the area. The monthly distribution of the two crabs Cardiosoma armatum and Cardiosoma guanhumi for the month of July showed greater distribution pattern of 83 in July, 2012 for Cardiosoma armatum and 86 in July, 2012 for Cardiosoma armatum respectively. These values are in conformity with the research of Akin-oriola et al. [3] which showed the increase in the number of crabs caught in June and July including the size group of 4.0-4.9 cm showed the highest distribution pattern in May, September and November. Cardiosoma armatum in the Gulf of Guinea showed a maximum carapace length of 9.5 cm, Akin-oriola et al. [3] this is in agreement with the present study which also conform with the work of Atar and Secer, [17] and Lawal-Are and Nwankwo [4]. The logarithmic form of length-weight relationship of both crab species show low b value. Cardiosoma armatum shows a positive isometric growth with values 0.4573, 0.2205 and 0.3378 for male, female and combined sexes respectively. The length-weight relationship for Cardiosoma guanhumi was 0.1038, 0.2134 and 0.2113 for male, female and combined sexes respectively, this value are supported by Turner et al. [10]. However, females of both crabs showed a lower b value of 0.2205 and 0.2113 for Cardiosoma armatum and Cardiosoma guanhumi respectively, Which is scientifically attributed to the slow rate of growth of female crabs and the great amount of energy invested in the reproductive process at the expenses of growth by females [10]. Observations of higher b value of Cardiosoma guanhumi over Cardiosoma armatum were linked to the higher population and standing stock biomass and condition indices [17]. The overall low symmetrical or isometric growth of b values was less than 3 and this is due to the recruitment stock in biomass. Which is due to the peculiarity of coastal dwelling land crabs to show irregular recruitment pattern with uncertainty of returning to a small land mass after the planktonic laval phase [18]. T-test statistical analysis between the two crabs Cardiosoma armatum and Callinectes pallidus for carapace length, weight and chelae were reported by Akin-oriola et al. [3] the result shows concurrence with the present research.

The analysis of the two crabs, Cardiosoma armatum and Cardiosoma guanhumi for the Size and growth parameter indicate the ecological richness of the mangrove ecosystem. The significant amount of size and the abundance including the frequency of the two crabs greatly expose that the crabs have influenced the vegetation which is attributed to the lagoon ecosystem. This research has served as a baseline for the use of crustaceans to monitor the ecological significance of the lagos lagoon habitat.

This study was a research to contribute to the scholarly attribute of the mangrove area of the Lagos Lagoon around the University of Lagos. We appreciate the support and contributions of the Department of Marine Sciences, University of Lagos, Akoka, Lagos, most especially for the permission to use their facilities. We also thank the people who assisted with the fieldwork, laboratory activities and the data analysis. 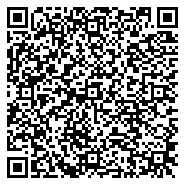