Copyright: © 2014 Hosseini M, et al. This is an open-access article distributed under the terms of the Creative Commons Attribution License, which permits unrestricted use, distribution, and reproduction in any medium, provided the original author and source are credited.

Size at maturity, sex ratio and variant morphometrics of blue swimming crab Portunus segnis was studied for one year along the Persian Gulf coasts, Iran. Sex ratio during a year of study was M:F=0.92:1 which should be the relative frequency of females. Male blue crabs have a V-shaped abdomen and female have an abdomen broad and rounded. The carapace width/length- weight relationship was studied in both sexes of crab. The allometric relationships between the characters of this set suggest that most relationships are positive and highly significant. An analysis of covariance indicates that there is a significant difference between sexes with respect to the carapace width-weight relationship. The crab’s carapace widths ranged were from 75 to175 mm for males and 70 to170 mm for females. The crab’s carapace lengths were from 35 to 80 mm for male and 30 to 80 mm for female. The results of this study show that at the same size, weight and the parameters of carapace length and carapace width male of Portunus segnis are higher than females in Persian Gulf coasts.

Crabs belong to a group of animals knows as brachyura crustaceans. Most of the marine crabs occurring along the Persian Gulf coasts belong to the family Portunidae. The blue swimming crab Portunus segnis is distributed from the eastern Mediterranean to east Africa in the Indian Ocean, and to Pakistan, Red Sea and Persian Gulf [1]. Also live in a wide range of inshore and continental shelf areas, including sandy, muddy or algal and sea grass habitats, from the intertidal zone to at least 50 m depth. They are usually found in large numbers in shallow bays with sandy bottom and are important commercial species is Iran and South East Asia [2-4].

This species supports substantial commercial fishery in the Persian Gulf and is an important component of many recreational fisheries in Iran and other parts of the world and the major species crab caught in trawl nets. They have five paired legs (ten legs), some of the legs are pointed and others flat. The pointed ones are used for crawling and the flat ones are used like paddles for swimming. The first pair of legs, which are modified as claws, called chelipeds. The cheliped are long, elongated ridged, catch and hold food and bring it to the mouth, digging, cracking open shells and warning off would be attackers. At the same size, males are heavier than females in the coasts of Persian Gulf.

In crustaceans, as growth progresses, certain dimensions of the animal’s body may grow much more than others, resulting in the phenomenon known as relative growth [5]. Studies of relative growth are often used to determine changes in the form and size of the abdomen, pleopods, or chelipeds during ontogeny. Knowledge of these distinguishing characters and size relationships in sexually mature individuals is of particular importance in the study of commercially valuable crustaceans. Such knowledge can be useful for further studies on the life history of the species and in the development of its fishery, resource management, and culture. The mathematical length-weight relationship thus yields information on the general well-being of individuals, variation in growth according to sex, size at first maturity, gonadal development, and breeding season. Study of the length-weight relationship in aquatic animals has wide application in delineating the growth patterns during their developmental pathways [6].

In population studies, morphometric analysis provides a powerful complement to genetic and environmental stock identification approaches and length-weight relationships allow the conversion of growth-in-length equations to growth-in-weight for use in a stock assessment model [6]. Information about individual body weightlength/ width relationships in populations is important for estimating the population size of a stock, specifically for the purpose of its exploitation. The length-width/weight relationships are regarded as more suitable for evaluating crustacean populations [7-12]. The interrelationships between various morphometric characters, carapace width and length and chelar propodus length, and abdominal width in females and males, were analysed and are here presented. The results will be useful in comparing the different stocks of the same species at different geographical locations.

Sampling was performed in Persian Gulf coast (Boushehr province) including stations four along the Buoshehr coasts .The crabs for study were collected seasonal for one year from January 2011 to December 2011. Sampling was performed with several methods such as trawl net, research ship. After sampling, samples were taken to the laboratory in a cooler and stored in a deep freezer for further analysis. Then the crabs are washed for removing the mud and algae’s and barnacles sticked to the external skeleton. Crabs were identified to species level carried out using photo cards and available identification keys [7,8]. Therefore each crab was sorted into species. The first sex and their morphological characteristics (Wet weight, carapace width and carapace length, width and length of the abdomen and chelar (propodus) length) were taken. Male blue swimming crabs have a V-shaped abdomen and female crab have an abdomen broad and rounded [8]. Vernier callipers with an accuracy of 0.5 mm were used for length measurements, and the total weight of the crab was determined to the nearest gram using a digital balance (1 g).

A total of 448 female crabs of P. segnis of various sizes were randomly sampled and only 278 crabs of P. segnis had mature abdomen. The largest immature female encountered was 16.5 cm CW and the smallest mature female was 7.40 cm CW. Using the abdominal flap changes for female as an indicator of crab maturity, the percentage of female crabs that mature was calculated for each 0.5 cm CW interval from CW range of 6.0 cm (the smallest size range of the crab sampled) to CW range of 17.0 cm (the largest size range of the crab sampled). Using the linear regression at the CW ranges that shows percentage of maturity, CW50 occurred at7.5 cm CW in the female crabs with y=30.5x+10.5 and R2=0.9368 (Figure 2). 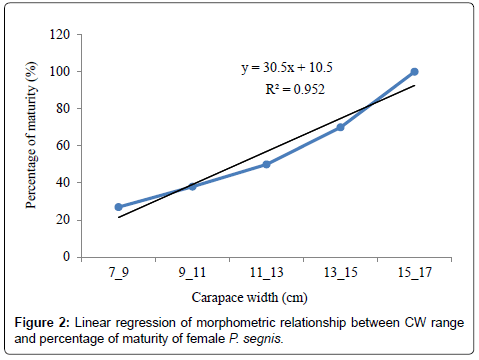 Out of 418 male crabs sampled, only 242 crabs of P. segnis were mature. Male crab maturity was determined based on the presence of enlarged and white vas deferens. The largest immature male encountered was 17.5 cm CW and the smallest mature female was 7.5 cm CW. Using the presence of vas deferens for male as an indicator of crab maturity, the percentage of male crabs that mature was calculated for each 0.5 cm CW interval from CW range of 6.0 cm (the smallest size range of the crab sampled) to CW range of 17.5 cm (the largest size range of the crab sampled). Linear regression analysis at the CW ranges that shows percentage of maturity, shows that the size at maturity, CW50 occurred at 8.24 cm CW in the male crabs with y=17.2x+0.8 and R2=0.9844 (Figure 3). 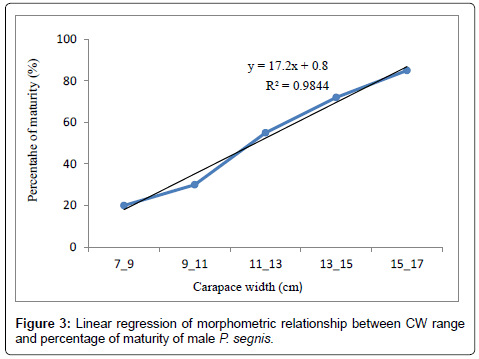 Allometric equations with respect to males and females of P. segnis are indicated in Tables 2 and 3. The allometric relation between the set of characters studied suggested that in most cases the relationship was positive and highly significant. The study has shown that males are marginally heavier than females up to 120-125 mm carapace width, and there after males are heavier than females. The scatter diagram for males and females was obtained by plotting weight against carapace width/length of individual crabs. From the data presented, a distinct relationship was found between width and total weight, as judged from the closeness of the scatter dots, as well as from the parabolic nature of the plot.

The exponential values (b) for the carapace width-weight relationship in males and females (2.334 and 2.554, respectively) show that there is marked deviation from the isometric growth pattern (Table 4). The ‘t ’ test confirmed that ‘b’ significantly differs from 3, in both sexes. The exponential values (b) for carapace length-weight in males and females (2.112 and 3.443, respectively) indicate that the significant departure from isometric growth is only evident in females. In males, the curve follows an isometric growth pattern. The ‘t’ values are given in Table 5.

Table 5: The ‘t’ values for the carapace width/length and total weight relationship in males and females of P. segnis. 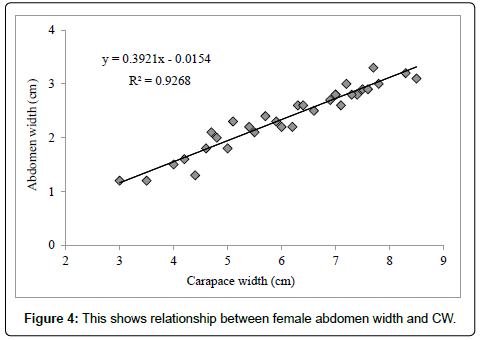 Figure 4: This shows relationship between female abdomen width and CW. 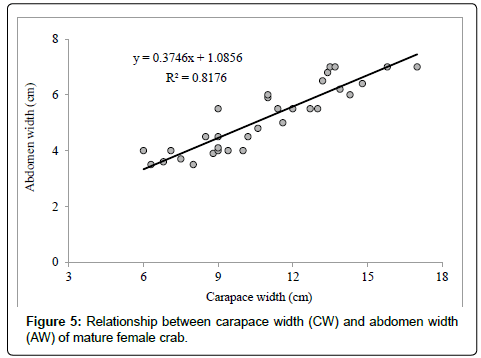 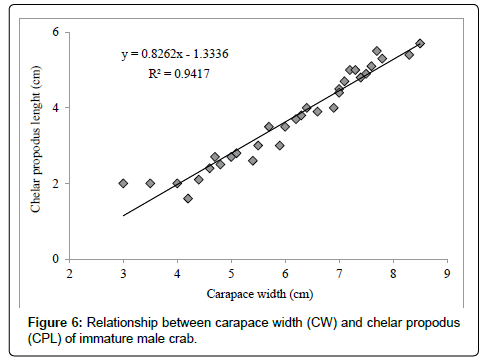 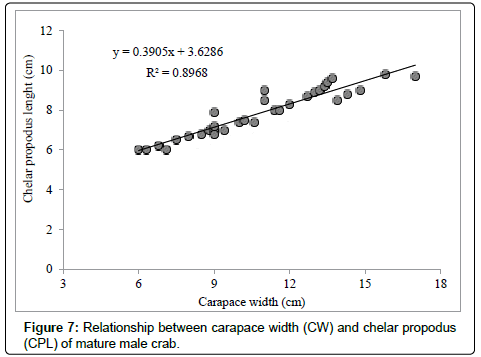 Sexual maturity is defined the ability to successful mate and results in the extrusion of fertilized egg [8]. The pubertal molt stage in P. segnis is said to be a reliable indicator of the ability of female crab to mate. Studies have also shows that the female Portunus spp. molt again after the pubertal molt [12-14]. The result from the present study shows that the P. segnis male mature at a smaller size than female crab for both morphological appearances and relative growth.

Knowledge of the distinguishing characteristics and size relations of sexually mature individuals is of particular importance in the study of commercially valuable crustaceans. Crabs of the family Portunidae are distinguished by having the dactylus of their fifth pereiopods enlarged and flattened, which facilitates swimming. In the Indo-Pacific region, the genus segnis is represented by a member that has nine antero-lateral spines at each side of the carapace, the posteriormost one of which is enlarged. All these characters are in agreement with the descriptions of Portunus segnis. In addition, in this species sexes are easily differentiated by the colour pattern of their exoskeleton. Males are brilliantly coloured with bright blue, and females have a dull brown colour. This unique feature is not seen in other common portunids. Gross morphological differences in external anatomy between sexes are similar to those of other portunid crabs [11-15].

The results of the length-weight relationship analysis in P. segnis indicate that in juveniles and pre-adult crabs, weight gain is almost uniform; males are slightly heavier than females until they attain 10-12 cm carapace width. Thereafter males are heavier than females at any given length [6]. Sukumaran and Neelakantan [16] found a weight increase was evident above a carapace width of 115 mm in P. pelagicus. The tendency of males to be heavier than females in portunids is in accordance with the observations of Potter et al. [17] in P. pelagicus and P. sanguinolentus (Herbst, 1783), from Cochin [17], in P. sanguinolentus from Mangalore of Prasad et al. [18], in P. sanguinolentus, P. pelagicus, and Scylla serrate from Karwar and of Sukumaran, and of Neelakantan [18] in P. pelagicus and P. sanguinolentus from Mangalore [19]. However, from the reports of these workers it is understood that there are marked variations in the results of carapace width-weight relationship in portunids from different places, and also within various regions of the same coast.

In brachyuran crabs chela in males and abdomen in females are considered as secondary sexual characters because of their functions in reproduction. The male crab uses its chela for territorial defense, combat, mating and courtship as well as in carrying and holding the female during copulation. The abdomen in adult females forms an incubation chamber for the developing eggs, which are attached to the setose pleopods. The increase in relative growth of the male chela and female abdomen at the puberty molt brings these structures to full functional size at sexual maturity. Hence the relative growth of chela in males and abdomenin females has been used to determine size at which puberty molt occurs or functional maturity attained.

We thank Dr. Amir Vazirizadeh and Mr. Ali Mansoori for insightful comments; and for field assistance. Financial support was carried out by Shahid Bheshti University, Iran.