Copyright: © 2016 Arman H, et al. This is an open-access article distributed under the terms of the Creative Commons Attribution License, which permits unrestricted use, distribution, and reproduction in any medium, provided the original author and source are credited.

A term of durability, which controls the stability of surficial and underground cavities, is usually used to describe the resistance of a rock to weathering and the rate of occurrence of such changes. To assess the durability of rocks, the slake durability test was widely used for evaluation of physical changes and/or slaking behavior of rocks as result of wetting-drying processes. First time, large number of laboratory tests will be conducted to understand durability of the Lower Oligocene limestones, which have extensively fractured and cavernous features. Since Al Ain city is located on the foundational level of these limestones bedrock, it has been motivated to conduct a detailed laboratory study to characterize the durability behavior of the bedrocks. The area of Jabel Hafit and surrounding hills will be selected as a targeted study area due to the easily accessible of rock outcrops. This study is a unique and will tackle problems related to rock engineering such as underground openings and slope stability, which have been encountered in the study area during and after any engineering applications. Furthermore, this study may help better understanding of durability problems, mitigate any possible causality and reduce loss of property today and/or in the future too.

Different durability test procedures have been suggested to assess the resistance of a rock sample to weakening and disintegration. The most important and commonly used one is the slake durability index test, which was basically developed by Franklin and Chandra [1]. In 1981, the test was recommended by the International Society of Rock Mechanics (ISRM) and then finally it was also standardized by the American Society for Testing and Materials (ASTM) in 1990 [2-4].

The basic futures of the slake durability test consists of oven-drying some almost equi-dimensional rock lumps (10 pieces of about 40 g to 60 g each) which may be naturally occurring or may be produced by breaking with a hammer and rotating them for a 10 minutes at 20 revolutions per minute (20 rpm) in a test drum made of a standard sieve mesh (# 10 sieve, 2 mm). Sharp corners on the rock slumps are broken off, if any, and remove any dust by brushing the rock lumps just prior to weighting. These rock slumps were rotated in the drum half immersed in a slaking fluid, generally tap water or distilled water, at about 20°C (Figure 1). The products of slaking finer than 2 mm pass through the drum into the water whilst test is in progress. The rock pieces retaining in the drum are oven dried at 110°C for 24 hours, cooled and weighed (first cycle. Id1). The test is repeated for all test samples ones again (second cycle, Id2). The slake durability index is generally calculated at the Id2, but can be calculated for each cycle, as the percentage ratio of final to initial dry weights of rock in the drum after two drying and wetting cycles [2,3,5]. Grupta and Ahmed stated that the slake durability is an important engineering parameter and represents the degradability of rocks due to the process of chemical and mechanical breakdown as in exfoliation, hydration, solution, oxidation, abrasion [5]. It is also closely related to the mineralogical composition of rocks and their textures. Some investigators were also shown that the mineral composition of rocks along with their textures like crystal interlocking, crystal shape and size, surface roughness, crystal area, crystal perimeter length and effective porosity were greatly related to slake durability of rocks [14-17]. Furthermore, the nondurable behaviour of the rocks comes from the long-short influence of chemical weathering on a rock [6,18], indicating the necessity for the assessment of weathering process and slaking property. So that, it is very important to examine the mineralogical and textural properties of the rocks into account while the slaking property. Also, the slake durability can be influenced by the rock alteration associated with weathering, diagenesis and hydrothermal processes on the geological scale [19].

The objective of this paper is to have a better understanding of the weather ability of the associated paleokarstic cavernous bedrock, limestones, which have been encountered in the study area. In addition to the interesting geotechnical information, the paper will provide needed information for engineering and environmental project in the targeted area, minimizes unnecessary survey for stability problems, reduce costs associated with any kind of engineering applications, mitigate any possible causality and reduce loss of property today and/ or in the future, too.

Geological Setting and Characterization of Limestone

The most complete exposure in the UAE of Oligocene rocks exposed on the limbs of the Jabal Hafit anticline [20-24]. The Asmari Formation of Early Oligocene covers most of the foundational bedrock of Al-Ain city, located in the southeastern part of the UAE.

From the field observation and laboratory investigation of the collected samples from the four sites (Figure 2) at the western limb of Jabal Hafit showed that, the Asmari Formation is divided into three members attains about 295 m thick of carbonate rocks. The basal member is 70 m thick composed of soft green marl, with recrystallised gypsum alternating with argillaceous limestone highly fossiliferous with Nummulites species of larger foraminifera and others macrofossils (Figure 3). The middle member is 140 m thick and composed of hard nodular limestone, sometimes dolomitic, fossiliferous with reef patches of corals and molluscs shell fragments. Towards the top member, 85 m thick composed of bioclastic white limestone becomes more chalky rich with microfossils at the topmost part. Figure 2: Location maps of the studied section at the western limb of Jabal Hafit. 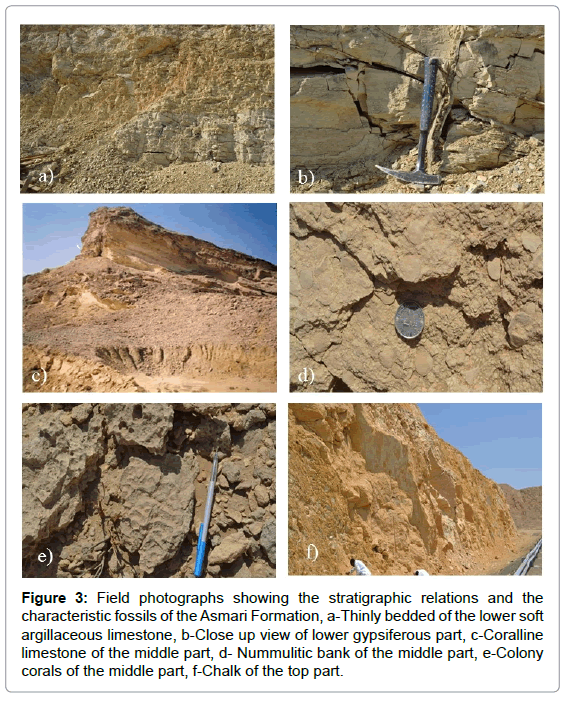 The degree of hardness of the carbonate rocks in the sequence depends on the components of the limestone itself. Therefore, the limestone in the study area is classified into; chalky limestone (soft), argillaceous limestone (intermediate) and dolomitic limestone (hard). These three members of limestone are dissected by several sets of joints, and host abundant connected paleokarstic cavities of varied sizes. The diagenetic processes including dissolution, dolomitization, compaction and cementation that partially control the mechanical behavior of the rocks have affected the studied rocks. Arman et al. mentioned that the dolomitization of limestones increases their strength, in contrary increasing the chalk percent decreases rock’s strength [24].

Limestones that have been subjected to overload or tectonic stress can be expected to have changed by some combination of deformation (plastic or brittle), neomorphism (as micrite conversion to microspar or aggrading pseudospar), and solution [25]. Specific limestone units (beds, structures, or grains) may be preferentially resistant or responsive to change and with or without impurities (especially magnesium ions and clay particles) that will affect the character of change. Nodular limestones are a characteristic product of non-sutured seam solution in silty, clayey limestones. Form and scale of fitted nodules may or may not be influenced by primary structures.

Chalk is principally a soft limestone consisting of the remains of marine microorganisms, deposited in shallow to deeper water environment. Chalk characterized by different physical and chemical properties [26] such as white in color, hard texture with dusty feel, a high porosity and relatively low dry density and can hold large amounts of water. At certain pressure it crumbles into pieces experimentally, the chalk first underwent brittle failure at lower confining pressures but above 4.9 MN/m2 significant plastic deformations occured leading to barrel-shaped failures. Capizzi in 2005, mentioned that the indirect tensile strength is usually less than one twentieth that of the unconfined compressive strength [26]. It also decomposes into CaO and CO2 when it burned.

Representative rock samples were collected from selected rock outcrops (Figure 2). Laboratory slake durability index tests performed on rock pieces, about 40 g to 60 g each, prepared in laboratory condition using a geologist’s hammer or chisel. Before testing, rock pieces were freed from any sharp corners with hammer and dust on rock pieces also removed with brush. The slake durability index test accomplished according to standards ASTM D4644-08 [4]. Tap water was used as a slaking fluid and each sample was subjected three cycles. Large number of laboratory tests conducted to understand the durability of the lower oligocene limestones.

Total of 90 limestone samples were tested by the slake durability apparatus. Of these samples, 45 were classified as hard, 32 as intermediate and last 13 samples as soft. The test results for all types are presented in Figure 4. Even though data designate scattering behaviour, surprisingly and in general sense, the slake durability of soft limestone (chalky) is high compared to intermediate and hard limestone. This could be due to the low water absorption of the calcareous wall of the microfossils preserved in the chalky limestone and low porosity of chalky the limestone itself during the interaction of the slaking fluid, water. The durability behaviour of rock is an important engineering parameter in design; construction and long-term stability of structures build on or in rock material. Even though there is no reliable suggested method available in the literatures with a certain standard for in-situ definition of rock durability, it is considered time consuming and may take long term real time observation and recording. On the other hand, rock durability is commonly assessed in the laboratory on rock pieces since it is in a practical and inexpensive way compared to in-situ test. Certainly, understanding of rock weather ability problems that can be associated with today and future engineering applications will increase the safety and reduce cost and casualties.

The authors wish to express their sincere appreciation to the Research Affair office at the United Arab Emirates University for providing financial support for this research (COS/IRG-14/14).