In the physiotherapy, adequate exercise therapy has been important including aerobic and resistance exercise. Authors and colleagues have treated lots of patients with metabolic syndrome (Met-S) and reported for nutritional and exercise therapy. In this study, subjects included 73 patients with type 2 diabetes mellitus (T2DM) aged 66.8 ± 13.0 y.o. Methods included squat exercising 5 minutes twice a day for 6 months, using exercise equipment ‘HiSquat’.

The basal data were BMI 24.8 ± 4.8 kg/m2, abdominal circumference 87.2 ± 11.0 cm, thigh circumference 42.7 ± 6.2 cm, HbA1c 7.0 ± 1.0%. HbA1c value at 6 months was 6.5 ± 1.0%, with significant decrease. Significant correlation was shown between BMI and the abdomen/height ratio. Patients with higher HbA1c would be more effective for squat exercise therapy. There is limitation of this study, and further investigation of correlation among biomarkers would develop various researches. Our results would be fundamental and reference data in this research field.

In the physiotherapy, adequate exercise therapy has been valuable including aerobic and resistance exercise. Both exercises are necessary for healthy people as health program, and also for patients with metabolic syndrome as medical treatment.

There were several guidelines for physical activity [1-5], and simple and useful resistance method has been expected. Resistance exercise with muscle/weight training has effects on muscle hypertrophy, muscle power and muscle endurance [6].

In this study, we investigated 73 patients (M/F: 44/29) with diabetes mellitus (66.8 ± 13.1 years old, mean ± SD), who were outpatients of a clinic in Tokushima, Japan. The protocol were as follows: 1) they continue squat exercise 5 minutes in the morning and evening every day for 6 months, 2) they use the small exercise equipment ‘HiSquat (trademark registration number 3179684) (Figure 1), 3) The depth of squat was from quarter to half, 4) One leg was extended to the back and then the opposite leg was extended to the back, in turn [10-12]. Data was represented as the mean +/- SD, and as median, quartile of 25% and 75% in biomarkers. For statistical analyses, correlation coefficients were calculated using the Microsoft Excel analytical tool, which is Four steps Excel Statistics 3rd edition by Yanai, Seiun-sha Publishing, 2014. T-test was applied for the differences in the HbA1c value between 0 and 6 month.

The present study was conducted in compliance with the ethical principles of the Declaration of Helsinki and Japan’s Act on the Protection of Personal Information, and with reference to the Ministerial Ordinance on Good Clinical Practice (GCP) for Drug (Ordinance of Ministry of Health and Welfare No. 28 of March 27, 1997).

Table 1: Basal data of the subjects.

There were significant correlation between HbA1c value and abdominal circumference/height ratio (p<0.01) (Figure 2). 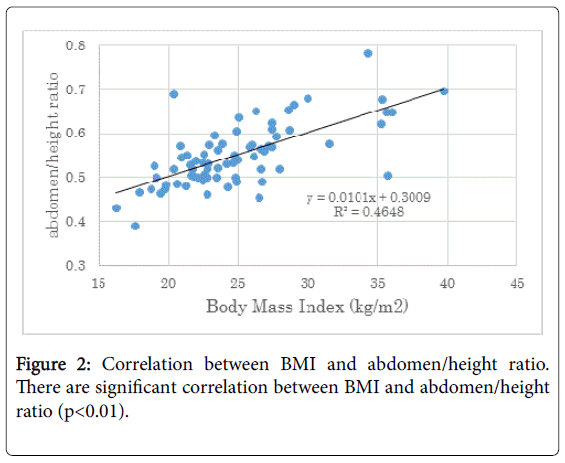 Systematic reviews and meta-analyses were reported concerning sedentary condition and metabolic syndrome, in which risk for T2DM increases to 1.910 [13-15]. Furthermore, risk for T2DM has an incidence rate ratio of 1.86, with influence to postprandial glucose and insulin levels [16-18].

Consequently, the effect of HiSquat seemed to be small in low group, moderate in middle group, and greater in high group. In other words, poorly controlled patients with T2DM would seem to have a greater effect by squatting, and are recommended to try exercise therapy on HiSquat equipment, unless they have knee or back problems.

In the light of physiotherapy, the neurosurgeon, Brett Osborn stated five exercises to protect aging [19]. They are 1) squatting?2) overhead press, 3) deadlift, 4) bench press, 5) pull-up / chin-up. He cited that 8762 men aged 20-80 [20], in which after 18.9 years of follow-up, the men still living were those with the most muscular strength.

For “stronger for long- a functional training elixir”, six primal movement patterns with progression are summarized [21]. Those are 1) squat, 2) lunge, 3) pull/dead lift/row, 4) push/plank/hover, 5) twist (torso rotation), 6) gait (walk/run), in which the squat is the most fundamental and valuable.

Here, we investigated the effect for the patients with T2DM using HiSquat and HbA1c value was significantly decreased. Our protocols, however, was not enough to speculate the efficacy of resistance exercise, with limitation of current research. Then our results would at least provide basal and related data of exercise therapy for diabetes.