Copyright: © 2016 Tiwari SK, et al. This is an open-access article distributed under the terms of the Creative Commons Attribution License, which permits unrestricted use, distribution, and reproduction in any medium, provided the original author and source are credited.

Dillenia pentagyna belongs to family Dilleniaceae, is commonly known as Karkat. It is small deciduous tree reaching up to the height of 10-12 m with a straight bole. The species is distributed throughout in India including Andaman & Nicobar. It is highly important medicinal tree species. Its leaves, fruits and bark show antibacterial, antialpha glucosidase and antioxidant property. Due to its high medicinal value the natural occurrence of this species is declining day by day and gradually the species comes under the threat condition. The species is highly recalcitrant in nature, because it very difficult to propagate by conventional propagation methods.

Now there is an urgent need to develop an appropriate technology for its conservation and clonal propagation. An attempt has been made for standardizing the clonal propagation technique of this valuable medicinal species through stem branch cuttings under intermittent misting conditions in mist chamber. The optimum rooting response has been standardized by various parts per million (ppm) concentrations and treatment timings of root promoting hormones Indol-3 butyric acid-(IBA) and α-Naphthalene acetic acid (NAA). The optimum rooting response >60 percent was observed when the cutting were treated up to 20 minute with 500 ppm concentration of Indol-3 butyric acid. On an average 6 roots with10-15 cm length were induced from the cuttings after 30-35 days. Α-Naphthalene acetic acid was failed to induce roots from the cuttings.

The natural populations of some of the commercially important medicinal and aromatic plants species are gradually declining day by day from their natural habitats due to unsustainable harvesting practices, huge biotic pressure, recalcitrant nature of the species includes poor seeding and seed germination, non-availability of adequate amount of quality seeds/planting stocks and limitations in other propagation methods. Due to these factors most of the medicinal plant species comes under either rare, endangered, or threat category [1].

Therefore, today it is an urgent need to develop appropriate clonal propagation techniques through which the species can be multiplied easily and reintroduce in their natural habitats. Today there are several techniques and protocols are available for multiplying such taxa. Keeping under consideration of above situation of this valuable species, in this paper an attempt has been made for optimizing the induction of roots from stem branch cutting by standardizing the macro clonal propagation protocol. Different root promoting hormones (IBA, NAA) were tested in different concentrations ranging from 100 ppm to 1000 ppm. The different cutting size and seasonal rooting behavior were also highlighted in this paper.

Morphology: Dillenia is a genus of about 100 species of flowering plants of the family Dilleniaceae. The genus is named after the German botanist Johann Jacob Dillenius. In English, it is known as Dog Teak & in Hindi, it is known as Karmal. Dillenia pentagyna Rox. belongs to family Dilliniaceae (Karmal family). It is tall deciduous tree up to 15 m tall with short crooked and slender bole. The bark is greyish white. Leaves are simple, alternate, spiral, clustered at twig ends. Flowers are yellow in colour. Fruit and Seed are globose, seeds are 1 or 2 per carpel [1,2] (Figure 1). Medicinal property and its uses: Recent studies have shown that the extract of the bark of this plant had antibacterial and cytotoxic activity [1]. An ethnobotanical study among the various tribal and folk communities of Vindhya Region, Madhya Pradesh, reveal that they use the various parts of it for the treatment of their different ailments and diseases, viz., delivery (bark), bone fracture (leaf), body pain (root), piles (leaf), diabetes (bark), diarrhea and dysentery (bark) [2]. Several other biological activities have been shown to be present in the secondary metabolites isolated from among those metabolites are terpenoids and flavonoids. The plant also shows antibacterial, antioxidant and anti-α- glucosidase activities and also used in the treatments of tuberculosis, fistula, sores, carbuncle, neuralgia, pleurisy and pneumonia. Barks and leaves are used for the treatment of diarrhea and dysentery.

Propagation of the plant: Dillenia pentagyna is commonly propagated through seeds but 10 to15 percent seeds germination percent is reported [3]. Due to lamination of seed propagation it is very essential to evolve its alternative propagation methods.

Due to over exploitation the species is gradually disappearing from the natural forest areas hence its conservation and propagation using alternative propagation techniques is very essential. This paper highlights the clonal propagation protocol of this valuable species through stem branch cuttings.

The propagation materials (stem branch cuttings) were collected from naturally grown plants. The cuttings were properly packed in gunny bags so as to maintain the moisture around them.

Preparation of cuttings for macropropagation Figure 4: Showing the types of cuttings.

Different concentrations of root promoting hormones (make Accumix) were prepared for optimizing the maximum root induction from the cuttings as mentioned in Table 1.

Placement of cuttings under polypropagators for induction of roots

b) Humidity: 80 to 90% with intermittent spraying of water.

c) Spraying frequency: 3 to 4 times in summer and 2 to 3 times in other seasons.

The rooting responses from the cuttings were recorded at a weekly Interval as presented in the result and discussion part.

Transfer and shifting of cuttings/Stacklings

After the successful rooting from the cuttings, the rooted cuttings were sifted in 1:1:1 mixture of soil, sand and FYM and were maintained initially in partial shade and then transfer in open area.

The experiments were conducted from January 2014 to January 2015. The rooting response from the cuttings was recorded at weekly intervals (Tables 2-6). It was observed that, the rooting responses were directly influenced by various hormonal concentrations as well as their treatment durations. It was interesting to note that the medium sized cuttings (10 to 12 cm) which were semi hard wood in nature showed better rooting response as compared to long and hardwood cuttings.

Table 3: Effect of different ppm concentration of IBA and time on the rooting percentage in Sami hard wood cuttings (Data of 3 replications).

Table 4: Effect of different ppm concentration of IBA and time on the rooting percentage in hard wood cuttings (Data of 3 replications).

Table 5: Effect of different ppm concentration of NAA and time on the rooting percentage in Semi hard wood cuttings (Data of 3 replications).

Table 6: Effect of different ppm concentration of NAA and time on the rooting percentage in hard wood cuttings (Data of 3 replications).

In the present study two root promoting hormones (Table 1) were used and from the present findings, it was noticed that Indol-3 butyric acid (IBA) showed maximum rooting response as compared to α-Naphthalene acetic acid (NAA) (Tables 3-6).The maximum rooting response was observed from the semi hard wood cuttings when treated with 500 ppm concentration for 20 minutes of Indol-3 butyric acid (IBA) and on an average >60 percent rooting were induced within 30 to 35 days (Table 3) (Figures 6 and 7). It was also noticed that the hardwood cuttings showed 57 percent rooting response (Table 4). Seasonal variations were also recorded for root induction and it was observed that March to July was the suitable months for maximum root induction (Figure 5). Other concentrations of IBA showed moderate to poor rooting response. Comparatively α-Naphthalene acetic acid (NAA) was found less effective hormone as far as root induction is concern and on an average 46 percent rooting were induced as well as induction of roots were also delayed (Tables 5 and 6). 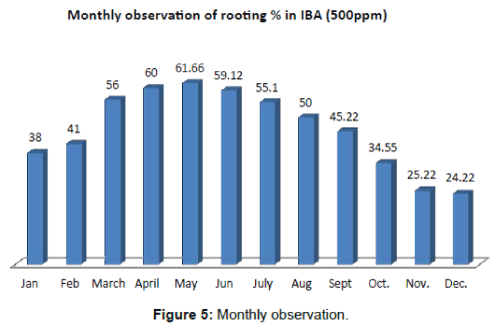 Figure 6: Induction of roots from the cuttings. Figure 7: Induction of roots from the cuttings. From the above study, it is concluded that IBA was found to be the best root promoting hormone when the semi hardwood cuttings were treated at 500 PPM concentration for 20 minutes. The medium grad pure send was the suitable culture medium for induction of root because it helps the cuttings for proper air circulation and prevent cuttings from decaying. The optimum temperature for maximum rooting was found in between 35 to 45ºC with 80 to 90% humidity with intermittent misting.