The Effect of <em>Aeromonas spp.</em> on the Growth of <em>Legionella pneumophila in vitro</em> | OMICS International

The Effect of Aeromonas spp. on the Growth of Legionella pneumophila in vitro

Amin A Al-Sulami1*, Asaad MR Al-Taee2 and Anita A Yehyazarian2

Copyright: © 2013 Al-Sulami AA, et al. This is an open-access article distributed under the terms of the Creative Commons Attribution License, which permits unrestricted use, distribution, and reproduction in any medium, provided the original author and source are credited.

Most species belonging to Aeromonas genus, particularly those associated with human infections, are widely distributed in the environment, especially in freshwater, sewage, marine environments, and drinking water, and are also found in a wide range of animal and plant food products [1,2]. The US Environmental Protection Agency proposed Aeromonas hydrophila as one of the contaminants of concern in waterborne diseases [3]. Legionella pneumophila, the causative organism of Legionnaires disease, can infect and kill specific species of amoebae in aquatic environments and can multiply as an intracellular parasite in human phagocytic cells [4]. Legionella spp. are commonly found in aquatic environments, and responsible for 1 to 5% of cases of community-acquired pneumonia (CAP) [5]. Approximately 70 to 90% of Legionella infections are caused by L. pneumophila serogroups 1 and 6 [6]. Scientists have realized that in the natural world, more than 99% of all bacteria exist as biofilms [7]. The most alarming results are the presence and multiplication of pathogenic and opportunistic pathogens such as Escherichia coli, Pseudomonas, Aeromonas and Legionella spp. occurring within biofilms [8,9]. The previous studies found that heterotrophic bacteria isolated from environmental water sources were capable of inhibiting the growth of Legionella species on solid media and included several Aeromonas strains [10,11]. The purpose of this investigation was to evaluate the ability of Aeromonas spp. isolated from aquatic sources (water sanitation plants, water distribution systems, and reverse osmosis water) in Basrah governorate Iraq, to inhibit the growth of L. pneumophila serogroup1-15, from the same sources, in vitro.

A duplicate of 100 ml water samples were filtered by membrane filtration (MF) technique using 47 mm cellulose acetate filters with a nominal pore size of 0.45 µm (Sartorius, Germany). Filter papers were cultured aerobically at 37°C for 24 hours on Ampicillin Dextrin Agar with Vancomycin (ADA-V) supplemented with 5 ml of both ampicillin dextrin selective supplement and vancomycin (Himedia\India) [12]. The other filter papers were cultured aerobically at 35°C for 3 days on Legionella Agar Base (LAB) medium which consists of (g/l) yeast extract 10.0, charcoal activated 1.5, ACES buffer 6.0, α- ketoglutarate 1.0, potassium hydroxide 1.5 and agar 17.0 and supplemented with colistin sulphate, vancomycin, trimethoprim and amphotericin B (Himedia\ India) [13]. Identification of Aeromonas spp. was carried out by rapid identification system Hi Carbohydrate Kit (Himedia) and biochemical tests. Eighteen isolates have been tested for their inhibitory ability, while six isolates as L. pneumophila were identified by rapid Slide-Agglutination test system using Hi Legionella Latex Kit (Himedia) and biochemical tests, as serogroup 1 and serogroup 2- 15.

Pure cultures of all the 18 Aeromonas isolates were suspended in 10 ml of nutrient broth each to obtain a concentration of 6×108 CFU/ ml. and then centrifuged at 10000 rpm for 15 min. Supernatants were filtered through a filter papers with pore size of 0.22 µm(11) and stored at -20°C.

Assay of ability of Aeromonas spp. to inhibit growth of L. pneumophila

Each of the L. pneumophila serogroup was suspended in 10 ml of nutrient broth to obtain a concentration of 3×108 CFU/ml, then 0.1 ml of the suspension was spread evenly over the complete surface of LAB plate and subjected to the following treatments

a. Cell-free supernatants (CFSs): by micro pipetting, 20 µl CFS of each of the six Aeromonas species on to the inoculated LAB medium plates. Sterile distilled water used as control.

d. Inoculated plates were incubated aerobically at 37°C for 3 days, and then examined for zones of L. pneumophila growth inhibition surrounding each of the Aeromonas isolates. The inhibition zones were measured in millimeters, and then compared with control. 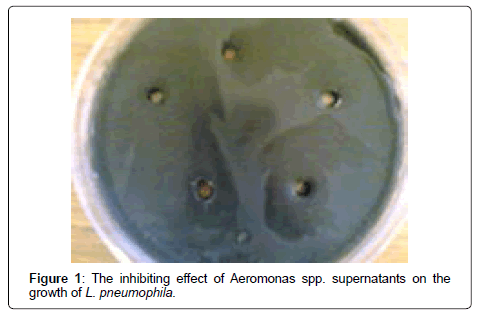 Figure 1: The inhibiting effect of Aeromonas spp. supernatants on the growth of L. pneumophila.

Table 1: Zone inhibition diameters (mm) of the cell-free supernatants (CFSs) of Aeromonas spp. on the growth of L. pneumophila

It is noted that all in case of solid culture of Aeromonas spp. (Figure 2) have shown ability to inhibiting the growth of L. pneumophila serogroup 1 with different diameters from 19 mm for A. veronii bv. veronii to 9 mm for A. eucrenophila. While there was a lower inhibitory effect of Aeromonas spp. solid cultures on the growth of L. pneumophila serogroup 2-15 as A. encheleia and A. schubertii inhibitory zones were 11.5 mm and 10.5 mm respectively while the inhibitory zone of A. caviae and A. eucrenophila were 7.5 mm (Table 2). Figure 2: The inhibiting effect of Aeromonas solid culture on the growth of L. pneumophila.

As seen above, it is noted that all solid cultures and the bacterial growth alone of the six Aeromonas spp. isolated from drinking water were able by different ranges in inhibiting the growth of L. pneumophila serogroup 2-15, and serogroup 1. In addition, these serogroups were more sensitive towards the solid culture and the Aeromonas spp. growth alone as compared with their CFSs.

Aeromonas spp. are found worldwide in aquatic environments, including ground water, surface waters, estuarine and marine waters, drinking water, and wastewater [14]. Legionella are also commonly found in aquatic environments, this bacterium has even been isolated from drinking water [15]. The presence of these two types and other bacterial types living in the same environment may affect the growth of each other [11,16]. Storey et al. [17] have indicated that the growth of L. pneumophila depends on other living microorganisms that are in the same environment and the reactions that occur between L. pneumophila and other living microorganisms are still unknown. These reactions may be limited by the production of bacteriocins and these compounds have a major role in dynamism of population in environmental systems [18]. The available information about the sensitivity of L. pneumophila for these compounds are limited as Héchard et al. [19] have indicated the role of the peptides secreted by Staphylococcus warneri in inhibiting the growth of L. pneumophila.

The supernatants (CFSs ) of Aeromonas spp. that are isolated from the drinking water have shown different sizes of inhibition zone diameter. It was also noted that there was no effect at all for the supernatants of A. caviae and A. veronii bv. veronii on the growth of L. pneumophila. The difference in the effect of the (CFSs) for the six types of Aeromonas that are isolated from the drinking water may be related to the difference of the extracellular compounds secreted by these types that in turn affect the growth of L. pneumophila as the secretion of these extracellular compounds varies according to the environment and this depends on the types of bacteria that are in the same environment and on the growth conditions [20]. The differences in the ability of the bacterial (CFSs) of the different types of Aeromonas on the growth of L. pneumophila can be also attributed to the differences in the bacterial strains belonging to different species of Aeromonas and the nature of the extracellular secretions for each strain [21].

To our knowledge, this is the first study in Iraq which determined the inhibitory effects of Aeromonas spp. against L. pneumophila isolated from different water sources in Basrah governorate. The results indicated that growth and multiplication of L. pneumophila could be affected by other bacteria sharing the same habitat and the level of this effect varies among the species. The presence of Aeromonas spp. and L. pneumophila in drinking water can be an important threat to public health, thus greater awareness of these bacteria as potential enteropathogens is warranted.