Copyright: © 2014 Argyropoulos DS. This is an open-access article distributed under the terms of the Creative Commons Attribution License, which permits unrestricted use, distribution, and reproduction in any medium, provided the original author and source are credited.

In a manner similar to crude oil, technical lignins need refining if their potential as reactive polyphenols of well-defined molecular weight polymers and oligomers is to be actualized. Our recent work has demonstrated that a continuum of narrow fractions can be isolated by the incremental addition of a non-polar solvent (hexanes) in a polar (acetone) solution of softwood wood kraft lignin

In a manner similar to crude oil, technical lignins need refining if their potential as reactive polyphenols of well-defined molecular weight polymers and oligomers is to be actualized. Our recent work has demonstrated that a continuum of narrow fractions can be isolated by the incremental addition of a non-polar solvent (hexanes) in a polar (acetone) solution of softwood wood kraft lignin [1,2].

Three distinct commercial samples of softwood kraft lignin were used to examine the validity of the developed protocol using detailed chromatographic and quantitative functional group analytical methods. It was shown that all samples contain a common, relatively monodisperse fraction of a polyphenolic material that can be isolated from the different lignins in yields ranging between 10 and 20% w/w. The versatility of the developed fractional precipitation protocol was further validated by creating artificial physical mixtures of the examined lignins in different proportions and isolating from them precisely calculated fractions of nearly identical molecular weight distributions and composition.

Theoretically, fractional precipitation may offer an infinite number of polymer fractions with the use of a continuous solvent gradient that involves two miscible organic solvents, one being a good solvent for a given polymer solution and the other being a poor solvent [3]. During our work, an effort was made to resolve the inherent heterogeneity of technical lignins by fractional precipitation with the aim to arrive at a technically feasible scheme that eventually may offer ways of refining this valuable technical resource.

When the GPC chromatograms of the detailed fractions of industrial kraft ligninKL1were normalized to unity and superimposed (Figure 1), a clear trend became apparent. The chromatographic peaks progressively shift from low elution volumes to higher ones upon successive additions of hexanes into acetone solutions of kraft lignin. The data displayed in Figure 1 shows that upon addition of hexanes the extreme heterogeneity of the starting kraft lignin, KL1 is dramatically reduced and highly monodisperse fractions of lignin can be obtained ranging from 1.5 to 1.1. Figure 1: Normalized and superimposed GPC chromatograms of kraft lignin fractions originating from a fine fractional precipitation procedure afforded by the addition of incremental amounts of hexanes (Hex) into acetone solutions of the lignin.

This is a significant advance over earlier solvent extraction efforts where the reported polydispersities (PDI’s) are usually higher than 2 [4,5]. The rationalization we offer for the fact that such highly uniform fractions of softwood kraft lignin can be created by fractional precipitation is because this process offers the ability to gradually alter the polarity of the environment the lignin molecules are solvated with and form a condition of complete dissolution. As such, theoretically, the polydispersity of lignin fractions approaches unity, the finer the selection of the solvent gradient.

Evidently, (and in our view of commercial significance), the PDI of the examined lignin fractions drops quickly from 11 (for the Acetone Insoluble Kraft Lignin (AIKL) to 4.7 and 2.5 for the first two fractions collected with the addition of 100 mL Hex and 200 mL Hex, respectively (Figure 1). The PDI then decreases more slowly, approaching 1.1 as the hexanes concentration is increased. The resulting uniformly narrow molecular weight distributions of the later fine fractions resulting from the detailed fractional precipitation is clearly demonstrated in the data of Figure 1. The data is indicative of the fact that it is possible to obtain well defined lignin fractions by the appropriate adjustment of the volume of hexanes into an acetone solution of softwood kraft lignin.

Towards a Generalized Fractional Precipitation of Softwood Kraft Lignin

The significance of developing such a process rests with the fact that to date kraft lignin is seen as a heterogeneous material. Its composition is relatively unpredictable because manufacturing variations in making pulp result in variable lignin streams that are incinerated. Creating the foundations for isolating a consistently homogeneous lignin stream from any lignin feedstock would thus offer a new way of refining lignin with significant commercial ramifications.

Our work was then focused at arriving at an isolation practical protocol that will allow one to prepare softwood kraft lignin fractions that not only possess good homogeneity (narrow polydispersity) but also are reproducibly produced in good yields from a variety of lignin streams and mixtures of kraft lignin. The practical procedure developed is shown as Scheme 1 in citation 1.

The power of the fractional precipitation approach becomes apparent in the data of Figure 2, where fraction ASKL PI [1], obtained from the three different softwood kraft lignins, and the three physical mixtures are overlayed. 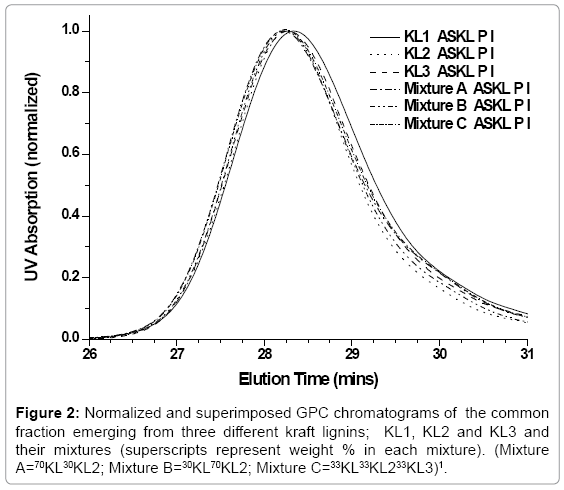 As per the overall objectives of our work, the fractional precipitation approach shows that lignin fractions of nearly identical, narrow molecular weighed distributions (without a high molecular weight shoulder or tail) can be obtained from three different industrial kraft lignins. Notably, this is irrespective of the processing details the wood has been subjected. Creating binary and/or ternary physical mixtures of industrial kraft lignins and subjecting them to the devised fractionation procedure1 offers the consistent common fraction ASKL PI with an identical molecular weight distribution.

This practical procedure demonstrates that it is possible to arrive at a consistent homogeneous fraction originating from different softwood species that have been subjected to different kraft pulping conditions. It is to be noted, however, that the actual description of the “practical” fractionation scheme presented as Scheme 1 in reference [1] does not represent a final commercial flow chart but simply an embarkation point, whose details need to be closely examined from a technical and financial point of view.

Starting from a state of complete dissolution in a polar solvent, lignin molecules can be precipitated upon gradual additions of a selected miscible but non-polar solvent. In this way, the molecular composition of each lignin fraction can be manipulated by adjusting the solvent mixture along an almost continuous solvent gradient. In our work, acetone and hexanes were used as the polar and non-polar solvents respectively. The developed fractionation procedure was shown to afford a nearly identical fraction from three different softwood kraft lignins. The validity of the procedure when examined with artificial physical mixtures of technical lignins offered data in accordance with predicted calculated values.

Overall, the fractional precipitation approach developed offers the possibility that representative specific narrow fractions, common to a selection of different industrial softwood kraft lignins can be isolated irrespective of the manufacturing details of the pulping process. As such, the otherwise known, heterogeneous kraft lignin material, whose composition is relatively unpredictable due to manufacturing variations in making pulp, may now offer consistently homogeneous lignin streams with significant commercial ramifications.