Copyright: © 2015 Zhang J, et al. This is an open-access article distributed under the terms of the Creative Commons Attribution License, which permits unrestricted use, distribution, and reproduction in any medium, provided the original author and source are credited.

Around the world, food-borne virus is one of the main pathogenic microorganisms in the aspect of causing people and animals with acute diarrhoea and poses a serious threat to human health. Therefore, the rapid detection of foodborne virus is very important to guarantee food safety and human health. Here, we reported that we developed a specific, convenient and fast detected method to detect rotavirus (RV) and hepatitis A virus (HAV) by using F0F1-ATPase molecular motor biosensor. Specific RNA probes were encompassed the conservative region of food-borne virus, and a molecular motor detect device was constructed by connecting probes to F0F1-ATPase molecular motor through biotin-streptavidin system. Extracted virus RNA was conjugated with the biosensor separately and meanwhile ATP was synthesized. By comparing their fluorescence intensity, virus RNA level was detected. Our results demonstrated that this biosensor’s sensitivity was the concentrations of 0.005 ng/mL and 0.01 ng/mL for RV and HAV respectively. Furthermore, this method possessed specificity for RV and HAV and none cross-reaction between them. What’s more, this method could be accomplished within 1h. We detected 15 samples by using this method and the results were consistent with RT-PCR results. Overall, this new-typed method based on F0F1-ATPase molecular motor biosensor for RV and HAV detection is sensitive and specific and can be used in the rapid detection of food-borne virus.

Food-borne virus, such as human calicivirus, rotavirus, astrovirus, the enteric adenovirus, hepatitis A virus, norovirus, is mainly transmitted through the route of contaminated food, water, and life, and poses a serious threat to human health [1-7]. For the reason of food safety, the rapid detection for food-borne virus is very important for food safety and human health. The traditional method of foodborne virus detection mainly includes electron technology, cultivation, immune detection and gene detection technology [8-11]. But, with the requirements of rapid detection of clinical research and importexport trade, the conventional detection methods have been unable to meet. Therefore, it is necessary to develop a more sensitive and specific detection methods for rapid detection of food-borne virus. Molecular motor biological sensing technology is a new kind of technology developed in the recent years and it has intuitive, high sensitivity, high speed, easy operation and less pollution properties. But up to now, the reports of molecular motor biosensor have been still limited in the application of food-borne virus detection.

Presently, in order to improve the technological level to detection and strengthen the prevention and control of food-borne virus, we have developed a novel F0F1-ATPase molecular motor biosensor detection method for RV and HAV detection and it exhibits excellent performance [23,24]. We propose this research might provide better solutions in the application of rapid detection of food borne virus.

The total mRNA of RV and HAV was extracted by using the RNA extraction kit (Qiangen, Valencia, CA, USA) according to the manufacturer's instructions and RNA sample was used as the target of the molecular motor biosensor.

Synthesizing and labeling of probes

Based on bioinformatics analysis, we designed the probes respectively for RV and HAV, and sequences are following as: RV, 5’- AAGCGGATTATGCAGAAGCACTG -3’; HAV, 5’-AGCGGCGGATATTGGTGAGTTGTTAAGAC-3’. The probe’s location of RV is in the highly conserved region of VP7 gene. The sequence of HAV’s probe is a consensus region and highly conserved in all gene phenotypes of hepatitis A virus. All probes were labeled by biotin in the 5’ end and purchased from Takara (Kyoto, Japan).

ChroRV and ChroHAV were diluted to a certain ratio by using synthetic buffer (glycerol 20%, MgCl2 5 mM, Tricine 50 mM, KH2PO4 5 mM). 10 μL of samples was added to this mixes and blended through vortex shocking. Water and/or synthetic buffer were used as the blank. After adding 30 μL of start buffer (start buffer was prepared with 1.6 M ADP and synthetic buffer (1:3, v/v) before use), the reaction system was incubated 10 min at room temperature. Add 200 μL of PBS, and detect the fluorescence signal by using 96 well plates by microplate reader. The results were calculated from fluorescence value by the formula of

F-DHPE is known as a lipid fluorescent probe and can be embedded into the phospholipid molecules layer [12]. Furthermore, F-DHPE is a pH indicator and has been used to measure pH changes of phospholipid layer outside through embedding into lipid bilayer. In the range of pH 7.0 to 9.0, the fluorescence intensity of F-DHPE has a positive correlationship with PH [12]. In our study, F-DHPE was labeled into the phospholipid molecules layer to point out the synthetic efficiency of ATP. F0F1-ATPase is a rotary motor. During ATP synthesis, protons are pumped out of the Chromatophores, resulting in an increase of concentration of H+ out of the Chromatophores. Thus, the pH out of the Chromatophores will decrease, and the fluorescence probe F-DHPE is expected to detect the pH decrease [12]. In present, we successfully connected “ε-subunit antibody-streptavidin-biotin-probe” system to F0F1-ATPase and constructed the F0F1-ATPase molecular motor biosensor (Supplementary Figure S1). Generally, fluorescence intensity is higher significantly than that of without loads. However, because of Brownian motion, the fluorescence intensity is often lower than that of without loads. In other words, the significant differences in fluorescence intensity compared with negative control suggest the successful capture of target molecule.

F0F1-ATPase, a mitochondrial F0F1-ATP synthase, has a unique property due to its quickly rotary characteristics [12,13]. As we know, the F0F1 motor has many rotary subunits such as α-subunits, β-subunits and ε-subunits. Some reports showed that the ε-subunits may be more sensitive to the binding load than the other subunits [26,27]. According to these properties of F0F1 motor, in our study, we establish the coupling between the catalytic site (ε-subunits) and proton transferring. Additionally, conventional molecular experiments have many of operations such as PCR AMPLICATION, electrophoresis and hybridization; Due to large reduction of these usual operations the molecular motor biosensor greatly reduced the likelihood of contamination [28]. Molecular motor biosensor has rapid and precise properties and if we can make it subminiature and portable, or make it directly to detect at the scene of sample, it could be wildly applied. Predictably, along with the progress of micromachining technology and nanotechnology [29-32], the molecular motor biosensor will be largely applied in the various detection fields. In order to detect whether there were cross reactions of F0F1- ATPase molecular motor biosensor, we furthermore tested the specificity of ChroRV and ChroHAV respectively in RV, HAV and norovirus (NV) detection and data was shown as Figure 2. In RV detection, the molecular-biosensor fluorescence intensity of RV was significantly higher than the fluorescence intensity of H2O, however, the fluorescence intensity of HAV and NV was basically unchanged compared with the control indicating that the molecular motor biosensor of ChroRV is specific RNA and has none cross reactions with HAV and NV. Similarly, we have drawn the same conclusion in the specific test of HAV detection. Together, above result showed that F0F1-ATPase molecular motor biosensor (ChroRV and ChroHAV) is specific to the RV and HAV detection and there is no cross detection. 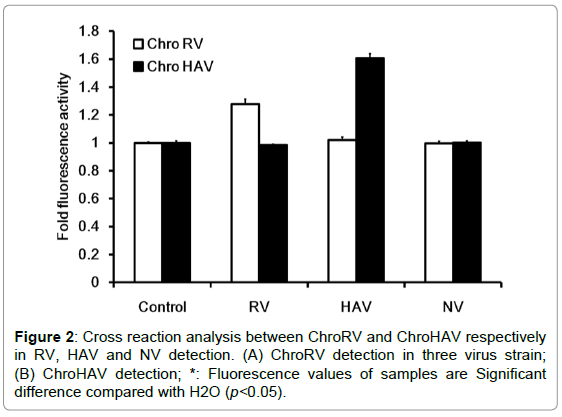 Figure 2:Cross reaction analysis between ChroRV and ChroHAV respectively in RV, HAV and NV detection. (A) ChroRV detection in three virus strain; (B) ChroHAV detection; *: Fluorescence values of samples are Significant difference compared with H2O (p<0.05). Figure 3:The sensitivity analysis of ChroRV and ChroHAV detection respectively under different RV and HAV concentration. (A) Fluorescence intensity of ChroRV under various concentrations of RV RNA. The same to ChroHAV (B). *: Fluorescence values of samples are Significant difference compared with H2O (p<0.05).

As we know, the concentration of food-borne virus in food is usually lower and meanwhile the sample amount of tested food has a large quantity. Additionally, the pathogenic quantity of food-borne virus infection is lower and especially 10~100 units of virus can cause infection. Therefore, a new-typed, high effective, rapid, precise and sensitive detection method is very necessary to the supervision of import-export detections. In this background, the establishment of our new detected method has been performed. Here, we just established the molecular motor detection in RV and HAV, but the usual food-borne virus has many kinds, such as human calicivirus (HuCV), astrovirus (AV) and enteric adenovirus (EV). Therefore, based on this study we next expanded the scope of food-borne virus detection and tried to simultaneously detect various food-borne viruses.

Applications of F0F1-ATPase molecular motor in the sample testing

In the above experiments, we proved that F0F1-ATPase molecular motors for the detection of RV and HAV were effective and specific, but the effectivity of biosensor in the applications of actual samples testes is still unknown. To address this question, we randomly chose 15 known negative/positive samples as the tested samples to perform molecular motor biosensor detection and the results were compared with the results of RT-PCR detected method (Table 1 and Supplemental Figure S3). From the result, we found that the result of molecular motor detection was absolutely same as the result of RT-PCR detection in RV and HAV detection respectively indicating that the detection of ChroRV and ChroHAV is completely used for the food-borne viruses daily inspection. The fluorescence value of molecular motor biosensor and control was shown as Supplemental Figure S3. Food-borne virus infection is increasingly becoming a public health problem in the worldwide [1]. Therefore, the establishment of sensitive and rapid detected method for food-borne virus detection is of great significance for protecting human health and preventing the outbreaks. Our result demonstrated the practical application of F0F1-ATPase biosensor and we hope these findings could be helpful to virus prevention and control.

In present, we have successfully used the Chromatophores extracted from thermophilic bacteria to construct a newly typed molecular motor biosensor and made it apply to RV and HAV detection. In our studies, we systematically investigated the specificity, sensitivity and veracity of F0F1-ATPase biosensor and the results revealed that it is an effective detected method for the detection of food-borne virus. What’s more, the significance of our study is that a rapid and sensitive detected method is provided for the food-borne virus detection and the test time can be shortened within 1 h. Additionally, due to large preparation of F0F1-ATPase molecular motors biosensor, the cost of this method is lower than that of other detection. We propose these findings might provide better solutions for clinical diagnosis, food detection and disease prevention of food-borne virus in the future.

We are grateful to Prof. Jiachang Yue, Institute of Biophysics, Chinese Academy of Sciences for his valuable suggestions.