The Feasibility of eHealth in Mental Health Care

3Department of Food and Environmental Sciences, University of Helsinki, Finland

Copyright: © 2014 Basnet S, et al. This is an open-access article distributed under the terms of the Creative Commons Attribution License, which permits unrestricted use, distribution, and reproduction in any medium, provided the original author and source are credited.

Currently, eHealth is widely used in mental health care. Most eHealth services have been developed for mental health care due to its distinctive features such as privacy, accessibility, affordability, acceptability, and cost-efficiency. This review summarizes existing literature on the feasibility of eHealth in mental health care and discusses its pros and cons as a service delivery tool. To conduct a systematic literature search, over 11000 articles were retrieved from PubMed and Medline. The keywords used in eHealth studies are diverse: according to the two databases, eHealth and mHealth are the most common ones. To date, a variety of eHealth applications have been developed for obsessive-compulsive disorders, phobias and other common mental health problems such as depression, anxiety, panic disorder, and generalized anxiety disorder. Both short and long-term positive outcomes have been reported when using these applications. eHealth has potential to overcome the fear of shame, guilt, and stigma, which are common concerns of mental health patients. However, licensing, ethical standards and guidelines for eHealth applications in mental health care is urgently needed as currently the rapid proliferation and commercialization of unproven electronic materials reduce the liability of eHealth services.

The concept of eHealth, as defined by the World Health Organization (WHO), is the use of information and communication technologies (ICT) in support of health and health–related fields including health care services, health surveillance, literature, and education, knowledge and research [1]. High accessibility makes Internet (Figure 1) a particularly good ICT platform for eHealth by lowering the threshold for help-seeking and enabling services to be delivered independently of time and place [2]. 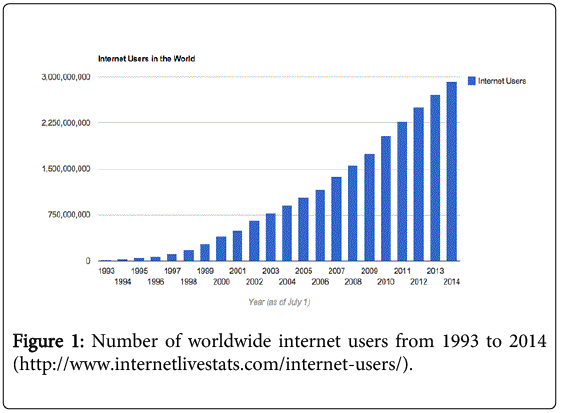 Figure 1: Number of worldwide internet users from 1993 to 2014 (http://www.internetlivestats.com/internet-users/).

Current terminology related to eHealth is diverse. Extensive literature searches carried out by the first author between July and September 2014 in the databases of Pubmed and Medline (covering a majority of publications in mental health field) revealed more than 11000 articles related to eHealth in mental health care. The keywords used in these articles are diverse, with eHealth and mHealth being the most common ones (Figure 2).

Figure 2: The keywords used in eHealth literature. The font size of each keyword corresponds to its frequency in publications retrieved from Pubmed and Medline.

Distant communication between a therapist and a client is not a new concept: already in 19th century Sigmund Freud extensively used letters to communicate with his clients [3]. Since the first study of eHealth in 1977 [4], helplines became the means of delivery, and in the 21st century Internet became the most common platform for eHealth services, permitting the use distant communication on a large scale for health care service delivery.

Most eHealth services have been developed for mental health care due to distinctive features such as privacy, accessibility, affordability, acceptability, and cost-efficiency [2,5-8]. This review summarizes existing literature on the feasibility of eHealth in mental health care and discusses its pros and cons as a service delivery tool.

eHealth services have been developed for the treatment of a variety of mental health problems [9-20] as well as for the purposes of mental health promotion and education [21-23]. One of the first eHealth applications applied in mental health care was OC-Check, which was developed in 1987 to assist OCD patients in larger reduction of OCD symptoms by reminding instructions and tracking intensity of the obsessions [10]. Later in 1998, computer-aided vicarious exposure (CAVE) program was introduced to encourage OCD patients in self-management of their symptoms [24]. The same method has later been successfully used to treat other phobias such as fear of flying and glossophobia [9,25]. To date, a variety of eHealth applications have been developed for OCDs [10,11,26,27], phobias [15,16,29] and other common mental health problems such as depression [26,30,53], anxiety [54], panic disorder [12], and generalized anxiety disorder [12,28,29]. Both short and long-term positive outcomes have been reported when usi

eHealth has a number of strengths in mental health care. First, eHealth applications reduce patients’ threshold to seek both information and help as eHealth can be utilized privately from home environment [7]. By providing anonymity, eHealth has the potential to overcome the fear of shame, guilt and stigma, which are common concerns of mental health patients [36,37]. Text-based communication via eHealth applications provides anonymity by removing social distinctions (such as disability, gender and age) [38] as well as non-verbal social cues (such as facial expressions, body language or vocal intonation) [39]. Further, text-based communication gives health care professionals and patients an opportunity to have more thorough and clear communication [39]. eHealth also provides a permanent record of the communication between patients and health care professionals [39] and hence allows proper monitoring and follow-up of the patients’ situation.

Second, eHealth is both accessible and affordable: most eHealth services are available 24/7 and often free of charge. When utilizing eHealth from home, the patients save also in travel expenses. Affordability of eHealth makes it an especially good option for patients with financial difficulties [36]. As eHealth can be used from home, it is applicable also for individuals with difficulties to travel, such as elderly and disabled people. The use of eHealth also reduces the expenses for the health care system [2,40]. Etter estimated that the total cost of implementing an eHealth application reaching 600 000 visitors per year per year is comparable to running a small smoking cessation clinic treating 600 patients per year [41].

Third, eHealth empowers the patients by giving them more responsibility over their own situation and activating them [42]. eHealth promotes self-monitoring, provides feedback and helps the patients to develop coping skills [43,44].By using mobile devices, help is at the hand all the time, which is often an important feature for the patients giving them the feeling of control over their symptoms [36]. eHealth has been shown to reduce both symptoms and clinician contact time as well as to increase patients’ adherence to the treatment, effectiveness even after years of follow up, improved quality of life, and increasing suitability to underserved population [14,45-51].

Fourth, applications of eHealth can easily be customized for the needs of different patient groups [36], for example separately for men and women or for different age groups. Customized content is more likely to be read, remembered and viewed as personally relevant and may thus increase the efficacy of eHealth services [52-54]. Lastly, eHealth provides sharing and networking possibilities among people with similar conditions: it promotes wellbeing by giving a sense of belonging within similar group of people who share similar problems [55].

A major weakness of eHealth is that it is not suitable for patients with low performance [56]. The use of eHealth requires initiative from the patients and thus severe physical or mental problems can prevent patients from using eHealth applications [15,56,57]. The convenient use of eHealth requires a certain degree of technical proficiency from both health care professionals and patients. This may leave especially elder patients outside the scope of eHealth.

Licensing ethical standards and guidelines for eHealth in mental health care at an international level [60] is urgently needed as currently the rapid proliferation and commercialization of unproven electronic materials reduce the liability of eHealth services. Lee et al. [61] have identified five common ethical concerns of eHealth that should be addressed during the informed consent process i.e. addressing the concerns related to the use of eHealth, the possibility of misunderstanding, maintenance of professional boundaries, issues of confidentiality, and interruption of services.

Performance indicators and training manuals for health care professionals needs to be developed, addressing concerns such as patient privacy, patient safety, treatment adherence, data protection, and doctor-patient relationship. Finally, it is important to remember that technology needs maintaining and proper help-desk services are needed alongside the eHealth services.

Currently, more than 250 websites and e-clinics are offering eHealth services for mental health problems [62-64]. According to the American Psychiatric Association (APA), the trend in using eHealth in mental health care is increasing [65]. Some national and international standards for eHealth applications have been recently established. In United States, the ethical guidelines outlined by APA (2002) and the International Society of Mental Health Organization’s (2009) (ISMHO) helps to better organize and develop eHealth. In European Union (EU) electronic commerce Directive 2000/31/EC (E-commerce Directive) provides the legal framework for eHealth information dissemination [60]. In UK, all e-health operators working within National Health Services (NHS) needs to comply with the Department of Health’s confidentiality code of practice and guidelines on information security.

The current health care system has trained its professionals primarily for face-to-face treatment. However, due to the increasing demand for eHealth services, certified eHealth training programs for health care professionals need to be developed. Also the development and recognition of eHealth guidelines is of high importance. More studies are needed concerning patient satisfaction, safety considerations and long-term benefits of eHealth services [66].