The Impacts of Climate Change on Rainfall and Flood Frequency: The Case of Hare Watershed, Southern Rift Valley of Ethiopia

Copyright: © 2017 Biniyam Y, et al. This is an open-access article distributed under the terms of the Creative Commons Attribution License, which permits unrestricted use, distribution, and reproduction in any medium, provided the original author and source are credited.

Hare River watershed is located in the Abaya-Chamo sub-basin of the southern Ethiopian Rift Valley and drains to Lake Abaya. The study aims to determine the impacts of climate change on rainfall and flood frequency of Hare watershed. In the study the daily data values of rainfall and discharge from 1980-2006 was used based on stream flow measurements carried out by MWIE. The downscaled climate data such as, RCP4.5 and RCP8.5 was used for the future period assessment. Both rainfall and flood frequency analysis was performed using Log-Pearson type III methods for return periods (T) of T = 2 yrs, 5 yrs, 10 yrs, 25 yrs, 50 yrs and 100 yrs. The annual peak flow frequency analysis has been carried out for the future (2020s, 2050s and 2080s) periods using the U.S. Army Corps of Engineers Statistical Software Package (HEC-SSP). RCP8.5 scenario for all return period by 2050s and 2080s predicted an increasing the change in rainfall magnitude. RCP4.5 scenario for all return period by 2020s and 2050s predicted decreasing rainfall magnitude. RCPs scenario predicted the 100-years flood of the current climate seems to increase to a flood return period of (2 yrs, 5 yrs, 10 yrs, 25 yrs and 50 yrs). The rainfall frequency analysis shows climate change will have impact on the frequency and magnitude of rainfall intensity. The future change in rainfall magnitude clearly governs in peak flow magnitude and frequency. Uncertainty analysis is recommended to assess the uncertainty associated with the bias correction method.

The IPCC finding indicates that developing countries, such as Ethiopia will be more vulnerable to climate change. Because of the less flexibility to adjust the economic structure and being largely dependent on agriculture, the impact of climate change has far reaching implication in Ethiopia. Increased industrial activity and excessive deforestation during the last century and a half has increased concentration of carbon dioxide in Earth's atmosphere. This has in turn initiated large scale atmospheric processes resulting in change of global temperature and precipitation (among other variables). Changes in Earth's climate system can disrupt the delicate balance of hydrologic cycle and can eventually lead to increased occurrence of extreme events (such as flood droughts, heat waves, summer, and ice storms, etc.) [1-7].

Extreme rainfall events and the resulting floods usually could cause significant damage to agriculture, ecology and infrastructure, disruption to human activities, injuries, and loss of lives [1]. Determination of frequencies and magnitudes of these events would enhance the management of water resources applications as well as the effective utilization of water resources. Such information can also be used for flood plain management and applied to the planning and designing of water resources related engineering, such as reservoir design, flood control work, drainage design, and soil and water conservation planning, etc. All these works require the rainfall data as a design basis. Though the nature of rainfall is erratic and varies with time and space specially during global warming, yet it is possible to predict the pattern of rainfall accurately for certain return periods using various probability distributions. Frequency analysis of rainfall data has been carried out at different places in Ethiopia without giving attention to the current word wide problem of climate variability [8-10].

Floods in Dire Dawa occur because of prolonged heavy rainfall causing rivers to overflow and inundate areas along the river banks in lowland plains. Flooding due to rainfall is probably the most severe among hydro meteorological hazards that cause damages to roads, bridges, residential, and agricultural areas [4]. Therefore, planning and protection of these basins, requires estimate of expected discharge from rainfall events of different magnitudes based on the current global problem of climate change. At the same time, the economic design of bridges, culverts, dams, and other hydraulic structures demands good knowledge of the likely floods which the structure would have to withstand during its estimated economic life. However, reliable estimates of flood frequency in terms of peak flows and volumes remain a current challenge in hydrology [11]. Besides this, the Impacts of climate change on rainfall and flood frequency is one sort of challenge to hydrologists. In our country, Ethiopia, many researchers like and Ho et al. and Cunnane [12,13] have been involved in rainfall and flood frequency relationships but they did not try to see the impact of climate change. However; the focus of this paper is to fill the gap which is the impact of climate change on rainfall and flood frequency [14].

The study area, Hare River watershed, is in the Abaya-Chamo sub-basin of the southern Ethiopian Rift Valley and drains to Lake Abaya, which is the second largest lake of the country. The watershed is situated between 37° 27? and 37° 37? Eastern longitude and 6° 03? and 6° 18? Northern latitude and has a land area of 153 km2 where 85 % of the watershed is gauged before it joins Lake Abaya. Smallholder agriculture is the dominant land use in the watershed [8].

Table 1: Location of CORDEX-Ethiopia output grids for the study area.

Precipitation correction: In the bias correction technique, nonlinear correction each daily precipitation amount P is transformed to a corrected P* a power transformation equation have been used.

Temperature correction: For temperature, monthly systematic biases were calculated for the baseline period by comparing RCPs outputs with the observations the monthly mean biases correction have been calculated according to the following Equation [6].

The annual peak flow frequency analysis has been carried out for the current (1980-2006) and future (2020s, 2050s and 2080s) periods using the U.S. Army Corps of Engineers Statistical Software Package (HEC-SSP). The input of this analysis was the simulated annual peak flow time series by current and future period. HEC-SSP. computed the statistical analysis of peak flow data in this software, the Bulletin 17B "Guidelines for determining peak flow frequency" (1982) and a generalized frequency analysis method have been employed for performing the peak flow frequency analysis. There are a number of two and three-parameter distributions described in literature exceedance [3] such as Gumbel, General Extreme value, Generalized Logistic, Log- Normal, Gama and Log-Pearson III. However, the Log-Pearson III method is generally recommended for analysis of annual flood series in HEC-SSP [11-14]. 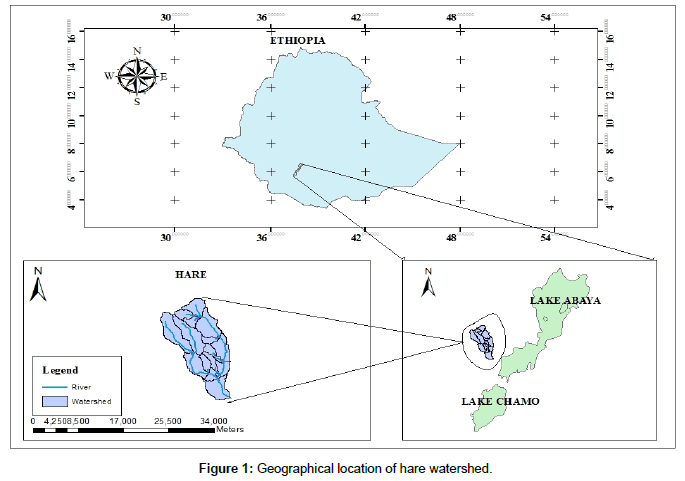 • The study investigated the impacts of climate change on the rainfall and flood frequency of the Hare watershed by using bias corrected RCPs climate data.

• The rainfall frequency analysis shows climate change will have impact on the frequency and magnitude of rainfall intensity. The future change in rainfall magnitude clearly governs in peak flow magnitude and frequency.

• The 100 years flood of the future climate seems to increase a flood event 20 to 50 years return period by the 2080s. This implication in the design of hydraulic structure in the Hare watershed.

• The flood frequency studies can be used as a guide in determining the capacity of a structure e.g. highway bridges, culverts, storm drains when it is permissible to take a means of estimating the probable flood damage prevented by a system of flood protection works over a period of years usually equal to the estimated economic life of the works