The Sleeping Stimuli of Oral Cavity

Copyright: © 2016 Rastogi K, et al. This is an open-access article distributed under the terms of the Creative Commons Attribution License, which permits unrestricted use, distribution, and reproduction in any medium, provided the original author and source are credited.

Several silent changes occurring in our dietary habits are apparently sleeping for decades before becoming active. These changes are responsible for severe mucosal and tissue changes affecting lifecycle of oral cavity. These alterations force us to seek medical and dental attention. The purpose of this article is to create awareness among the clinicians and patients about these sleeping stimuli for optimal prevention of these related medical and dental problems.

A healthy periodontium is stated when there are no gingival and tissue changes seen in the oral cavity. There are several features of healthy gingiva including coral pink colour with no signs of bleeding and inflammation, proper scalloping and contour, thus determining healthy tooth support. Any change in the dietary and food habits can trigger changes in oral mucosa resulting in major alterations in oral cavity. Sleeping stimuli can be defined as those stimuli or points which are present in oral cavity and once triggered cause severe damage to the periodontium. These stimuli are sharp tooth cusp due to improper dietary habits which can cause acidic pH resulting in abrasion; improper brushing habits which can lead to caries, irreversible and reversible pulpitis, abscesses and cysts; extreme hot and cold intake resulting into dentinal hypersensitivity, increased clenching of teeth due to hypertension and habits like smoking and tobacco chewing resulting into periodontal and mucosal changes [1].

Oral cavity cancer involves five significant and potent “S” - smoking, spirits (alcohol), syphilis, spices and sharp teeth [2]. The role of chronic dental trauma on the mucosa of oral cavity has only been included in few case studies and has never been well elucidated. In one previous study, it was observed that the edge of the tongue, a site for potential dental trauma accounted for 35% of oral cavity cancers in smoker patients [3]. In a 10 year study conducted in Queensland in the year-2011, it was observed that non-smoking women developed oropharyngeal cancer in only 12 cases but 53 women developed oral cancer on the edge of the tongue where teeth were having sharp cusp [4]. In another retrospective study, it was observed that several premalignant conditions were cured within 2-3 weeks when the traumatized tooth was relieved from trauma [5]. Abnormal positioning of teeth also plays an important role in creating sharp cusps thus indicating the importance of treating sharp cusp teeth.

Dental erosion is defined as the loss of dental hard tissue, associated with extrinsic and / or intrinsic acid that is not produced by bacteria [6]. Dental erosion is common and its prevalence has increased tremendously in recent years [7]. The prevalence varies in literature; however the median prevalence of dental erosion is 34.1% in children and 31.8% in adults [8-11]. Dental erosion is caused by a direct contact between tooth surfaces and acidic substances. In a previous study it was observed that demineralization of dental enamel occurs when the oral environment pH crosses the critical threshold of 5.5 [12]. Clearance of acidic beverages has been found in direct relationship with salivary flow rate. In another study, it was observed that reduced salivary flow rate and decreased buffering capacity of saliva resulted in accelerated erosive process of enamel [13]. However intrinsic acids released via gastro-intestinal disturbances also causes significant dental erosion. A thorough evaluation of dietary habits was found to be effective in assessing the erosive potential of several food stuffs. These several food stuffs are listed below in the given tables (Tables 1 and 2) added from a source [14-16].

Improper brushing also triggers this reaction, hence correct preventive measures like proper and appropriate method of brushing along with proper dietary intake will prevent this sleeping stimulus to cause abrasion [17].

Dentin hypersensitivity has been defined as a short, sharp pain arising from exposed dentin in response to stimuli- typically thermal, evaporative, tactile, osmotic or chemical and which cannot be ascribed to any other dental defect or disease (Canadian Advisory Board on Dentin hypersensitive teeth,2003) [18]. DH is a widespread condition with a reported prevalence varying from as low as 4.5% to as high as 57% (Cummins) [19]. The commonly involved sites are buccal cervical regions and occlusal/buccal sites, mostly found in young adults. Sometimes, the patient is too sensitive and cannot undergo even minor surgical procedure. DH is mainly caused by an external stimulus which acts over exposed dentinal tubules creating a pressure that triggers pain. Hence, it is important for the clinician to make the patients aware against this sleeping stimulus which can cause extreme discomfort to the patient.

Dietary changes have significant influence over microflora of oral cavity which once altered results in gingivitis and periodontitis. Gingivitis is defined as the inflammation of the gingiva which is a non-destructive form of periodontitis [20]. Large sugary intake alters the flora of the oral cavity that contributes to the growth of dental plaque which has the potential to cause inflammation associated with periodontal disease. Research studies have shown using an experimental gingivitis model that there were increased levels of bleeding on probing when participants were fed with rich carbohydrate diet as compared to individuals with low carbohydrate [21]. Another study supported this by investigating volunteers placed on a primitive diet which was high in fibre, anti-oxidants, and fish oils but were low in refined sugars and with no oral hygiene measures resulting into increased plaque levels but with reduced gingival bleeding from 35% to 13%.22 However till date, few elucidative studies exists on the mechanism of dietary effect on periodontium. Oxidative stress is found to be an important link between periodontitis and systemic disease. If this fine balance gets altered by excess production of oxidants and /or depletion of local antioxidants, the resulting oxidant excess causes oxidative stress resulting in local tissue damage as seen in periodontitis (Figure 1) [23]. 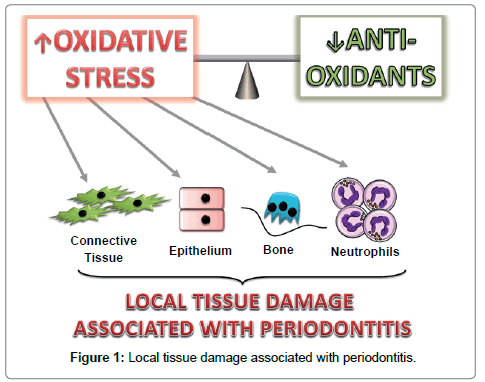 Hence, sugary diet in the form of sucrose is a sleeping trigger for the alteration of flora of oral cavity which can be prevented with adequate awareness.

Saliva plays an important role in the digestion, lubrication and diagnosis of underlying major systemic disease. Its alteration can occur in many systemic diseases like xerostomia, hypothyroidism, diabetes mellitus, etc. leading to various oral diseases including dental caries & periodontitis. Hence, it becomes all the way more important to diagnose a disease as early as possible as most of the systemic diseases gets diagnosed only when morbid symptoms become apparent in the late phase. To overcome this, it is important to find molecular disease biomarkers that are able to reveal a hidden lethal threat even before the disease becomes apparent. Saliva is one such diagnostic tool which is becoming popular due to its easy approachability and handling. Proposed salivary diagnostic markers are serum and salivary molecules such as immunoglobulins, enzymes constituents of gingival crevicular fluid, bacterial components or products, volatile compounds and phenotypic markers such as epithelial keratins (as shown in Figure 2) [24]. Many studies have attempted to determine a relationship between salivary levels of secretory IgA and various forms of periodontal diseases. Eggert et al. reported that saliva from treated periodontitis patients had higher IgA and IgG levels to periodontal pathogens Porphyromonas gingivalis and Treponema denticola than as compared to saliva from control subjects [25]. Sandholm et al. found increased concentrations of salivary IgG to Aggregatibacter actinomycetemcomitans in patients of aggressive periodontitis [26] (Figure 2). 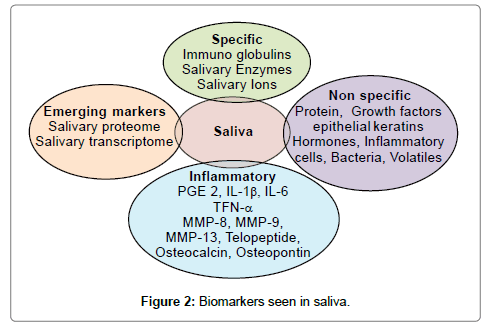 Saliva may constitute a first line of defence against free radicalmediated oxidative stress, since the process of mastication promotes a variety of such reactions, including lipid peroxidation [28]. Moreover, during gingival inflammation, gingival crevicular fluid (GCF) flow increases, adding to saliva with products from the inflammatory response. This is why the antioxidant capacity of saliva is of increasing interest. Saliva is an important antioxidant having uric acid in abundance followed by lesser contribution from albumin, ascorbate and glutathione [29]. The use of saliva for translational and clinical application has emerged in the form of salivary proteomes and transcriptomes for early diagnosis, disease progression and therapeutic monitoring which provide an important platform for the diagnosis of fatal diseases like oral cancer and Sjogren’s syndrome. Thus these upcoming markers are stage-set to provide a definitive platform for keeping an eye on the triggering of these sleeping stimuli.

Improper brushing plays a key role in development of almost all diseases related to oral cavity. Abrasion, erosion, dental caries, gingivitis and periodontitis are often the result of improper brushing, in addition to other factors. In one study, it was observed that improper brushing plays a key role in developing all the major diseases of oral cavity [17]. Hence; it is extremely important to educate the patient and clinician against this sleeping stimulus that trigger such conditions.

To summarize, proper education and awareness of the patient and the clinician about the sleeping stimuli of oral cavity can go a long way in maintaining good oral health and preventing common dental and gingival diseases.