The Study of Tyrosinase and Antioxidant Activity of Xylocarpus Granatum Koenig Seed Kernel Extract toward Evidence Based Indigenous Knowledge from Togean Archipelago, Indonesia

The Study of Tyrosinase and Antioxidant Activity of Xylocarpus Granatum Koenig Seed Kernel Extract toward Evidence Based Indigenous Knowledge from Togean Archipelago, Indonesia

Copyright: © 2015 Zamani NP, et al. This is an open-access article distributed under the terms of the Creative Commons Attribution License, which permits unrestricted use, distribution, and reproduction in any medium, provided the original author and source are credited.

Indonesian traditional medicine known as Jamu is an all natural medicine involving the use of natural natural resources including plants, animal and minerals. Originally, Jamu was a term used for Javanese traditional medicine, but how it is used as general term pertaining to Indonesian Traditional medicine. Indonesia is consist of 17.508 islands [1] and each area has own specific traditional medicine. The use of plants and other natural resources for medicinal purposes in Indonesia dates back to pre-historic times. Knowledge of indonesian traditional medicine has been passed down from generations to generations. About 300 distinct native ethnicities live in Indonesia and each ethnic group has used indigenous knowledge to develop folklore medicine based on availability of material in their own area. There have been a few studies of the traditional medicine of the indigenous tribal people of Togean (Sulawesi). Many local communities in Togean archipelago have already been utilized coastal plant for curing disease, health care, beauty care (cosmetic), tonic and sunscreen. Unfortunately, the use of medicinal plants by coastal community has not yet been documented well. Moreover, mangrove’s finding for lightening product already becomes a national patent from searching of indigenous knowledge in coastal area.

Coastal area of Indonesia is famous for its richness and biodiversity. One of the coastal ecosystem that provide natural resources for human life isa mangrove. Mangrove in Indonesia possess the highest biodiversity in the word with a total of 89 species, consisting of 35 species of plants, 9 species shrubs, 9 species of lianas, 29 species of epiphytes, and two species of parasitic.Mangroves biodiversity is a high valuable asset due to the ecological benefits as a source of food and traditional medicine. The extensive use of natural plants, such as mangrove, as health remedies due to their pharmacological properties is quite common. The investigation of efficacy of plant-based drugs has been paid great attention because of their side effects, cheap and easy availability. According World Health Organization (WHO) around 80% of the world people still rely mainly on plant drugs [2,3]. Mangrove plant has already been used as bioactive compound resources such as alkaloid, phenolic and steroid [4,5].

Many species of mangrove that uses traditional medicine, for instance, Xylocarpus granatum Koenig, local name in Indonesia is Nyirih have many activities such as antibacterial [6], antidiarrheal [7], antifeedant [8], cytotoxicity [9], tyrosinase and antioxidant activities [10]. Xylocarpus granatumis one species of Meliaceae family have been traditionally used for medicine by South East Asia shoreline inhabitants. Bioactive compounds of X. granatum have been known such as triterpenoid, alkaloids, phenolic acids, flavanol, stroids, and monoterpenoids [11].

Finding skin lightening agent from natural sources is one of our research focuses. To decrease hyperpigmentation and oxidative stress on skin, we need to reduce the formation of melanin in the human body. The formation of melanin in human body is influenced or reduced by several mechanisms, including antioxidant, direct tyrosinase inhibition, melanin inhibition of migration from cell to cell and hormonal activities, etc., [12,13].

Tyrosinase (EC 1.14.18.1), a copper-containing monooxygenase, is a key enzyme that catalyzes melanin synthesis in melanocytes [14,15]. It catalyzes two major reactions, including hydroxylation of L-tyrosine and oxidation of the o-diphenol product, L-DOPA (3,4-dihydroxyphenylalanine). DOPA oxidation produces a highly reactive intermediate that is further oxidized to form melanin by a free radical-coupling pathway. If free radicals are inappropriately processes in melanin synthesis, hydrogen peroxide (H2O2) is generated, leading to the production of hydroxyl radical (HO-) and other reactive oxygen species (ROS) [16]. Oxidative stress may be caused by increasing generation of (ROS) and other free radicals. These ROS enhance melanin biosynthesis, damage DNA and may induce proliferation of melanocytes [17]. Yamakoshi et al. [18] also found evidence that oxidative stress plays a role in the pathogenesis of skin disorders.. Besides, ROS scavanger such as antioxidants may reduce hyperpigmentation [19].

The utilization of X. granatum seed kernel as tyrosinase inhibitor and antioxidant substances have not been explored which that this part have already been used by Togean’s women for skin care passed down through their ancestor. The objectives of this study were to examine the tyrosinase inhibition and antioxidant activity of X. granatum seed kernel extracts. This result will be toward evidence of indigenous knowledge from Togean Archipelago, Sulawesi.

X. granatum seed kernel was dried and grounded before extraction process. Extraction was performed by using maceration method with 3 different solvents namely n-hexane, chloroform and methanol (25 g sample: 75 mL solvent) for 24 h in triplicate. The extracts were filtered using Whatman filter paper (No. 2) and concentrated in vocuo at 30°C using a rotary. The yields of extracts were calculated.

Detection of tannins [20]: 10 ml of the ethanolic extract (70% of seed kernel of this plant were filtered by filter paper. Many drops of ferric chloride reagent (FeCl3) (1%) have been added to the different filtered extracts. The presence of tannins is indicated by a blue color.

Detection of saponins [21]: The test tube containing each the previous filtered extracts were shacked for 5 minutes using a vortex. The apperance of big foamy indicates the presence of saponins.

Detection of alkaloids [21]: 0.2 g of the powder of two parts of this plant was dissolved in 10 ml of HCl 1%. Then, they were transferred to a water bath for few minutes. After, 1 ml of the filtrated extract was treated with 2-4 drops of dragendorff’s reagent. The presence of alkaloid is indicated by the appearance of an orange reddish precipitation.

Detection of terpenoids [20]: 1 ml of acetic anhydride and 2ml of concentrated sulphuric acid were added to beaker containing 1ml of previous extracts.The presence of reddish brown on the interface indicated the presence of terpenoids.

This assay was performed using methods as described earlier [10,23,24]. Our extracts were dissolved in DMSO (dimethyl sulphoxide) to a final concentration of 20 mg/ml. This extract stock solution was then diluted to 600 μg/mL in 50 mM potassium phosphate buffer(pH 6.5).The extracts were tested at the concentrations ranging from 7.812 to 500 μg/mL in a 96-well plate, 70 μL of each extract dilution was combined with 30 μL of tyrosinase (Sigma, 333 Units/mL in phosphate buffer) in triplicate. After incubation at room temperature for 5 min, 11 μL of substrate (2 mM L-tyrosinase or 12 mM L-DOPA) was added to each well. Incubation commenced for 30 min at room temperature. Optical densities of wells were then determined at 492 nm with multiwell plate reader. The tyrosinase activities (monophenolase and diphenolase activities) were analyzed in the present extract of X. granatum seed kernel compared to control. Kojic acid (Sigma, Checz Republic) was used as positive control.

The antioxidant activity test was performed using 1,1-diphenyl-2- picryhydrazyl (DPPH) as described in [25].

Total phenolic content of the extracts obtained from solvents having different dielectrict constant values was measured at 725 nm using Folin-Ciocalteau spectrophotometric method with sligthly modification [26]. The extract were mixed with Folin Ciocalteu reagent for 5 min, 5% Na2CO3 was then added and final volume made up to 25 mL with distilled water. After 60 min the absorbance was measured at 725 nm. Total phenol content was expressed as mg gallic acid equivalents (GAE)/100 g tissue.

A is the absorbance of blank

B is the absorbance of sample

Its correlation between total flavonoid content and tyrosinase inhibition as well as antioxidant a activity were analyzed with correlation test , r=+1 (positive correlation), r=0 (no correlation) and r=-1 (negative correlation). All data were calculated using the microsoft excell computer program.

The extraction of X. granatum seed kernel resulted rendement of methanolic extract is 21.48% whereas the rendement of chloroform extract is 1.87% and n-hexane extract is 1.97%. Three extracts of X. granatum seed kernel, namely methanol, chloroform, n-hexane extracts contain different secondary metabolite content (Table 1). Methanolic extract contained polar type compound such as phenolic compound groups (flavonoid and tannin) and saponin while chloroform and n-hexane extracts which contain semi-polar and non polar type compound were not consisted of flavonoid, tannin and saponin. According to Chang [27] that X. granatum species contains flavonoid compound group which are potent as tyrosinase inhibitor and antioxidant.

Based on the different constituents includingn-hexane, chloroform and methanol extracts. We screened their tyrosinase inhibitory activity (monophenolase and diphenolase) and also antioxidant activity. This result on Table 2 shown that tyrosinase inhibitory activity of X. granatum seed kernel methanolic extract is the best extracts which can inhibit monophenolase (IC50=323.11 ± 9.0 μg/mL) and diphenolase activity(IC50=1926.03 ± 81 μg/mL) with kojic acid as postive control. Futhermore, the methanolic extract also has antioxidant activity (IC50=10.61 ± 2.1 μg/mL). Moreover, n-hexane and chloroform extracts have no IC50 value until concentration of 2000 μg/mL for tyrosinase inhibition and 100 μg/mL for antioxidant. These result shown that nonpolar and semi-polar compound in X. granatum seed kernelhas not possess ability in inhibition of tyrosinase and antioxidant activities. 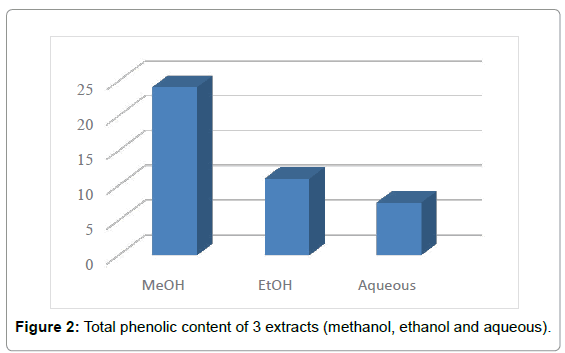 Its correlation coefficient of R2=0.98, (Y= -12.27x + 471.73) whereas for IC50 of diphenolase (Figure 3) had a correlation coefficient of R2=0.52, (Y= -0.28x + 25.67) (Figure 4). These results suggested positive correlation of monophenolase and diphenolase activity with tyrosinase activity, the antioxidant activity of three extracts wasnot limited to phenolics. Activity may also come from the presence of other antioxidant secondary metabolites like e limonoid, alkoloid and hidroquinone. Somecompounds such as thaimoluccensis A, thaimoluccensis C, 3β-deacetylfissinolide, 7-oxo-7-deacetoxygedunin, could be involve to the skin care since these compounds had been isolated and reported as anti-inflammatory activities [30]. Structure the two compounds is shown in Figure 5. 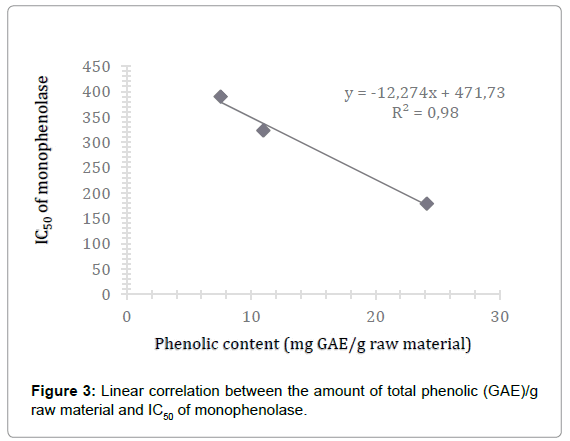 Figure 3: Linear correlation between the amount of total phenolic (GAE)/g raw material and IC50 of monophenolase. 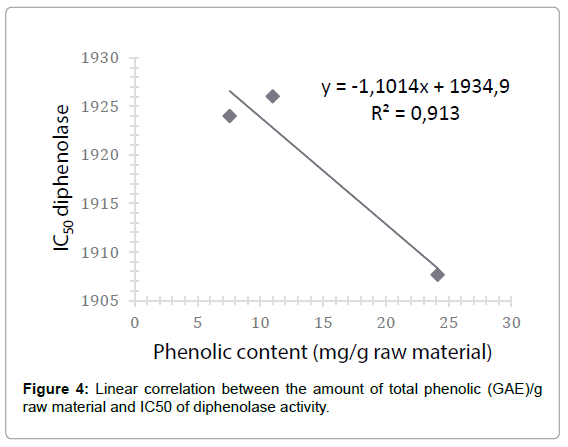 Figure 5 (a): Linear correlation between the amount of total phenolic (GAE)/g raw material and IC50 of antioxidant activity.
(b): Compounds isolated from Xylocarpus granatum.Thaimoluccensis A.

I would like to thank to Yasin Labente (Leader of Togean’s community) that helped us to collected mangrove specimen and ecology research in Bangkagi Coast. This research supported by Higher Education Directorate of National Education Department of Republic of Indonesia (Excellence Research accordance Center Mandate No.2013.089.521219).