Chair of Genetics of Prokaryotes, Faculty of Biology and CeBiTec, Bielefeld University, Germany

Copyright: 2014 Meiswinkel TM, et al. This is an open-access article distributed under the terms of the Creative Commons Attribution License, which permits unrestricted use, distribution, and reproduction in any medium, provided the original author and source are credited.

Thick juice (also regarded as syrup) is an intermediate product of sugar processing. It is cheaper than processed sugar and is mainly composed of sucrose. Sucrose is a preferred carbon source of Corynebacterium glutamicum, a workhorse of biotechnology used for million-ton-scale amino acid production. Here, it is shown for C. glutamicum that sugar beet thick juice led to higher growth rates and faster carbon source consumption than pure sucrose. Comparative DNA microarray analysis revealed differential expression of genes for butyrate and citrate catabolism and of NAD and biotin biosynthesis suggesting provision of these compounds by the thick juice. Thick juice was also shown to be superior to sucrose in production of the amino acids L-lysine, L-glutamate and L-arginine as well as of the diamine putrescine since higher volumetric productivities than with pure sucrose could be achieved. Taken together, sugar beet thick juice was shown to be a carbon source for growth and amino acid and diamine production of C. glutamicum superior to pure sucrose.

With resources of fossil oil becoming limiting, biotechnological production is getting more and more attractive [1,2]. Regarding the production of bulk chemicals the use of alternative carbon source for fermentation has become highly interesting to allow competing prices. One prospect is the use of thick juice, an intermediate product from sugar industry.

While production of table sugar involves many steps starting with e.g. sugar beet or sugar cane and ending in white crystalline sugar. First sugar beet is washed thoroughly and cut into chips. Out of these chips a crude juice is extracted by hot water treatment. This crude juice contains about 150g l-1 sugar as well as several contaminants. These contaminants are removed by filtration resulting in light yellow colored thin juice. Using low temperature and high vacuum conditions water is reduced and thick juice is generated with a sugar content of 650–700 g l-1. In order to get white crystalline sugar further concentration and cleaning steps like crystallization and centrifugation are required [3]. By using thick juice instead of fully processed sugar these steps are saved and thereby also the associated costs.

The Gram-positive soil bacterium Corynebacterium glutamicum is generally recognized as safe (GRAS) and used for the million-tonscale production of amino acids. Besides being used for L-glutamate and L-lysine production, C. glutamicum has been engineered for the production of diamines like putrescine (1,4-diaminobutane) [10,11] and cadaverine (1,5-diaminopentane) [12-14], ketoacids such as pyruvate [15] and 2-ketoisovalerate [16], diacids such as succinate [17-20], the alcohols ethanol [21] and iso-butanol [22], and further amino acids, e.g. L-arginine, L-ornithine [23] and L-proline [24] or carotenoids [25] as well as gamma-amino butyric acid [26].

Amino acid production by C. glutamicum is typically based on glucose from starch hydrolysates and fructose and sucrose from molasses. These sugars are imported and phosphorylated by the phospho-transferase system (PTS) [27]. While fructose and sucrose are transported via the PTS only, PTS-independent glucose uptake has been reported and characterized [28,29]. For access to further carbon sources C. glutamicum has been metabolically engineered: e.g. for access to xylose and arabinose, which can be found in hydrolysates of agricultural wastes [23,30-33], starch [34,35], cellobiose [36], as well as lactose and galactose, which are present in whey [37,38] or the chitin monomer glucosamine [39]. To the best of our knowledge, the use of thick juices or syrups for biotechnological processes with C. glutamicum has not yet been reported. Therefore, the genetic response of C. glutamicum to thick juice has been analyzed by transcriptomics and the performance of thick juice-based production by C. glutamicum has been compared production with sucrose.

All C. glutamicum strains used are listed in Table 1. For growth and production experiments CgXII medium [40] in 500 ml baffled shaking flasks was inoculated from LB overnight cultures and cultivated at 30°C and 120 rpm. Production of L-glutamate was triggered by 500 μg ml-1ethambutol[41]. Media for C. glutamicum ORN1 were supplemented with 500 μM L-arginine. Growth was followed by the determination of OD600, which was measured using a UV-1650 PC photometer (Shimadzu, Duisburg, Germany). When appropriate 100 vμg ml-1spectinomycin, 25 μg ml-1 kanamycin, and 1 mM isopropyl-β- D-thiogalactopyranosid (IPTG) were added to the medium to select and induce the plasmids listed in Table 1. Biomasses in g cell dry weight per liter (g CDW l-1) were calculated from OD600 as described previously by using a factor of 0.25 g CDW l-1 per OD600 [42].

Amino acids, putrescine and sucrose concentrations were quantified by HPLC as described previously [10, 44,45].

Preparation of total RNA, cDNA synthesis, DNA microarray hybridization, and gene expression analysis were performed as described before [46-48]. C. glutamicum WT strain ATCC 13032 was used for this experiment. Growth conditions were CgXII minimal medium with 100 mM of either pure sucrose or the equivalent thick juice as carbon source.

C. glutamicum WT which is able to utilize sucrose as sole carbon source via PTSS was used for growth experiments with thick juice. The sucrose concentration in the thick juice used was determined by HPLC as 642 g l-1. Growth experiments were carried out using CgXII minimal medium containing a final sucrose concentration of 34 g l-1 either from thick juice or from pure sucrose. C. glutamicum WT was inoculated to a starting biomass of 0.25 g CDW l-1 and growth was followed. As depicted in Figure 1A, growth with thick juice was slightly faster (0.56 ± 0.00 h-1) than with pure sucrose (0.49 ± 0.02 h-1) and the carbon source was depleted faster (after 9.5 h and 10.8 h, respectively). However, the final biomass concentrations were comparable (13.6 ± 0.5 g CDW l-1 with thick juice and 13.1 ± 1.3 g CDW l-1 with pure sucrose). 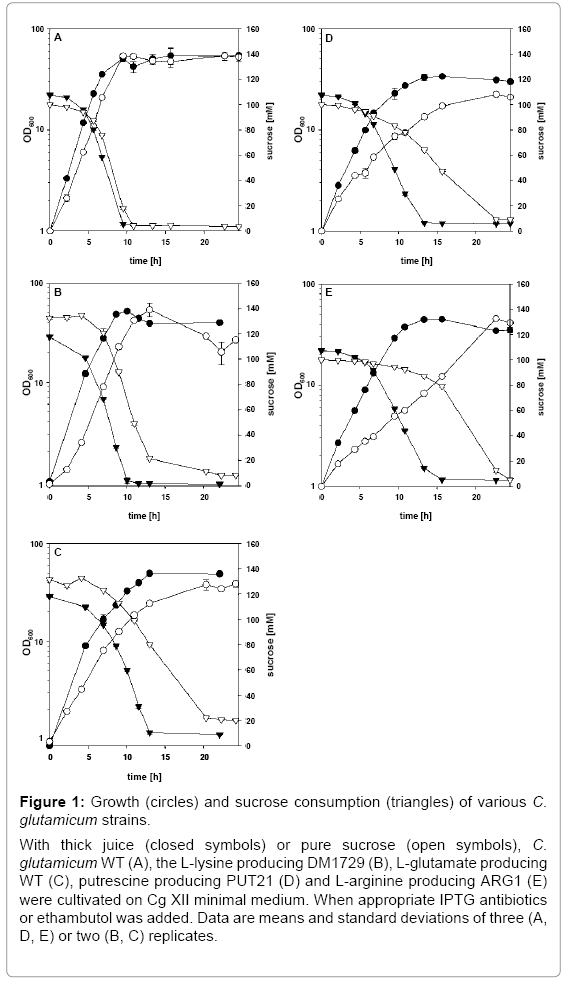 Increased gene expression during growth on thick juice was observed for twelve genes. Among these were eight genes of three operons, namely bioB and cg0096 (OP_cg0095; involved in biotin synthesis), gabTDP (OP_cg0566; involved in butyrate utilization) as well as tctABC (OP_cg3127; for citrate uptake).

Amino acid and putrescine production on sucrose and thick juice

To characterize production of C. glutamicum with thick juice, various engineered C. glutamicum strains were used. Besides production of the amino acids L-lysine, L-glutamate and L-arginine, production of the diamine putrescine, which is synthesized from an intermediate of arginine biosynthesis, was done comparing pure sucrose and thick juice. All strains were inoculated to a final biomass concentration of 0.25 g CDW l-1 into Cg XII minimal medium containing 34 g l-1 sucrose either from thick juice or from pure sucrose. Figure 1 shows growth and carbon source depletion during the respective production experiments. The maximal amino acids or diamine concentrations are summarized in Table 3. Specific productivities are given in Figure 2. 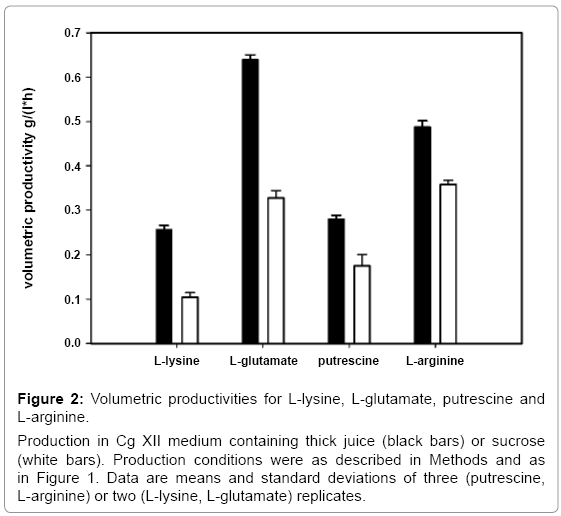 Strains and the respective growth and carbon source consumption charts are given in Figure 1. Product concentrations are given as means and standard deviations of three (putrescine, L-arginine) or two (L-lysine, l-glutamate) replicates are given after sucrose was depleted.

Putrescine production by C. glutamicum [10,11]is based on over expression of the E. coli ornithine decarboxylase gene speC in the ornithine production strain ORN1 [23] via pVWEx1-speC-5‘21- argF, which also renders the respective strain PUT21 prototrophic for L-arginine due to leaky expression of argF from the addiction plasmid [11]. When 34 g l-1 pure sucrose were provided 49.4 ± 3.6mM of putrescine were produced, which corresponds to a volumetric productivity of 0.17 ± 0.03 g l-1 h-1since sucrose was depleted after 22.6 h. When thick juice was used put rescine accumulated to comparable concentrations (46.6 ± 1.3 mM), but productivity increased significantly to 0.28 ± 0.01 g l-1 h-1 as sucrose was depleted already after 13.3 h and growth with thick juice was clearly faster (0.36 ± 0.00 as compared to 0.19 ± 0.01 h-1 with pure sucrose).

Sugar beet thick juice-based production of amino acids L-glutamate, L-lysine and L-arginine and of the diamine putrescine by C. glutamicum is described here for the first time. While most crude substrates like technical grade glycerol [51] or hemi cellulosic hydrolysates [30,33] inhibit growth, thick juice was shown here to be beneficial for growth, carbon source utilization and amino acid and diamine production with C. glutamicum. Thick juice is an intermediate of the sugar production process with already high sucrose concentration, but there are still some sugar beet ingredients present, which can have advantageous effects.

Regarding the results obtained from global gene expression analysis higher expression levels for bioB and adjacent cg0096 were detected under thick juice conditions. C. glutamicum is biotin auxotroph due to an incomplete biotin synthesis pathway and therefore is dependent on biotin import via BioYMN [52]. Subsequently, biotin protein ligase BirA [53] catalyzes covalent attachment of biotin to the two biotindependent enzymes of C. glutamicum, acetyl-CoA carboxylase [54] and pyruvate carboxylase [55]. Despite being biotin auxotrophic, genes of the incomplete biotin pathway are transcriptionally repressed by BioQ in C. glutamicum [56]. Higher RNA-levels of tctABC, which code for the citrate uptake system of C. glutamicum [57] might be due to citrate present in thick juice as citrate can be used as carbon source by C. glutamicum [58]. Cg3226 is adjacent to lldD, which is essential for lactate utilization in C. glutamicum [41] and both are regulated by LldR [59,60]. Cg3226 is suggested to be a lactate transporter [41] and lactate can be found in small amounts in thick juice (data not shown).

Reduced expression levels on thick juice were found for NAD synthesis genes nadACS. NAD biosynthesis involves three enzymatic reactions starting with aspartate which is converted to nicotinate mononucleotide via iminoaspartate and quinolinate usually catalyzed by Nad-ABC. In C. glutamicum the enzyme catalyzing the reaction from aspartate to iminoaspartate is unknown as there is no nadB [61]. From nicotinate mononucleotide NAD is build and this can be further phosphorylated by PpnK [62] to the reduced NADP. Furthermore prpCD showed lower expression which are part of propionate metabolism consisting of prpDBC in C. glutamicum and is regulated by PrpR [63]. With cg0924 and cg0926 two genes involved in iron uptake show lower expression levels, suggesting good iron conditions in thick juice. Supporting this also SufR regulated suf genes, which are important for assembly of iron-sulfur cluster, and cysR, involved in regulation of sulfur metabolism [64], are found to be differentially expressed.

We would like to thank Dr. Koch and Dr. Bruhns from Pfeifer and Langen GmbH and Co. KG for providing thick juice samples. We acknowledge support for the Article Processing Charge by the Deutsche Forschungsgemeinschaft and the Open Access Publication Fund of Bielefeld University.