Wheat (Triticum durum L.) is the leading source of cereal and vegetable protein in human food, having higher protein content than either maize (corn) or rice, the other major cereals. The objective was to study the association among grain yield and related traits and identify traits those have the most direct and indirect effects on grain yield. Sixty eight durum wheat accessions tested in an augmented block design. Twelve yield and related traits were recorded in the investigation. Analysis of variance revealed highly significant differences among accessions for all traits. Grain yield showed positive and significant correlation with grain filling period, productive tillers per plant, number of grains per spike, spikelets per spike, 1000 grain weight, biological yield and harvest index at both phenotypic and genotypic levels. This implies that through improving these traits possible to improve grain yield. Path coefficient analysis showed that harvest index and biological yield revealed high positive direct effect and positively high significant correlations with grain yield. Indicated these two characters can be considered for direct selection. However the present outcome is only an indication and we cannot reach a definite conclusion. Therefore, it is sensible to conduct a follow up study by incorporating more characters over different years and locations.

Durum wheat (Triticum durum L.) is a monocotyledonous plant of the Gramineae family of the Triticeae tribe that belongs to the genus Triticum. For commercial production and human consumption, it is the second most important Triticum species, next to common wheat (Triticum aestivum L.) (Garcia et al. and Simane et al.) [1,2]. It is the only tetraploid (AABB, 2n=4x=28) species of wheat which has commercially a great importance and carries raw material of numerous foods such as macaroni and semolina in alimentation of world population and it is a promising and viable alternative crop for farmers Shewry [3].

Grain yield of wheat is multifaceted quantitative trait that outcome to the actions and interactions of various component traits [6]. Thus, analysis of Correlation coefficient could be used as an vital tool to give the interrelationship of yield and yield contributing traits. It is also used to measure the strength and the direction of the relationships among the different characters and grain yield [7]. Correlation and path coefficient analysis could be used as important tools to bring information about appropriate cause and effect relationship between yield and some yield components [8]. Understanding the interrelationship between component characters will help in determining which character to be selected and when it is improved in relation to the desired characters.

The knowledge of the genetic relationship between grain yield and its components can help the breeders to improve the success and efficiency of the selection. In durum wheat to select genotypes of good yielder and the traits which contribute for the yield efficiency, it is important to study the relationships among the traits and find out their direct and indirect effects on grain yield [9]. A number of research finding showed that, the correlation coefficient measures the mutual relationship between various plant characters and determines the component characters on which selection can be based for the improvement in associated complex characters and yield [10-12]. Assessment of correlation coefficients between various yield traits helps to develop wheat cultivars with best combinations of yield attributes in wheat for obtaining higher yield [13]. In effective plant breeding program, identifying characters contributing to grain yield is important as it amplify breeding effectiveness. Therefore, the objective of this study was to assess the association among yield and yield contributing traits and identify traits those have the most direct and indirect effects on grain yield.

The field experiment was conducted at Kulumsa Agricultural Research Center (8° to 8° 2ˈ northern latitude and 39° 07ˈ to 39° 10ˈeastern longitude) which is located 160 km southeast of Addis Ababa and it is located at 8 km north of Asela town. The altitude of the center is 2200 masl with annual average rainfall of 832 mm. The annual average temperature of the study area is 16.65°C with maximum and minimum temperature of 22.8°C and 10.5°C respectively. With the soil type classified as clay loam soil with a pH of 6 (Source: Secondary data from KARC).

The field experiment was laid down in an Augmented Block Design having 4 blocks where each block contains 16 test entries and 4 checks (randomly allocated) with the total of 20 accessions in each blocks and accession was sown in 2 rows of 1.25 meter long and 20 cm apart. The recommended fertilizer rate of 100/100 kg/ha N/P2O5 in the forms of Urea and DAP was applied to each plot in the shallow furrow depths and mixed with soil at the same time during sowing. Other agronomic practices such as weeding were followed uniformly to all plots according to the recommendation of the location. No herbicide was applied to control weeds.

The data on plant basis were taken for each accession from ten randomly taken plants as follows:

➢ Plant height (cm): The plant height for randomly taken samples was measured in centimeter from ground level of the plant to the base of the spike excluding awns.

➢ Days to heading: The number of days taken from the date of sowing to the day on which the main ear comes out of the flag leaf completely in 50 per cent of the plants.

➢ Days to maturity: The numbers of days from date of sowing to a stage at which 75% of the plants have reached physiological maturity or 75% of the spikes on the plots turned golden yellow color were calculated.

➢ Biomass Yield (BMY) (kg/ha): It was recorded by weighing the total above ground biological yield harvested from all the plots of each accession at the time of harvest and converted to kg/ha.

The analysis of variance for each character was performed using the SPAD software developed by IASRI, New Delhi, India. Phenotypic and genotypic correlation and path coefficient analysis GENRES Statistical Soft ware or Package [14].

Correlation coefficient (r): Phenotypic and genotypic correlations between yield and yield related traits were estimated using the method described by Miller et al. [15] and tested for statistical significance against the correlation table values at 5 and 1% levels of significance. The statistical procedures were as follows:

Where: rpxy is phenotypic correlation coefficient between character x and y

Where: rgxy, genotypic correlation coefficient between character x and y

The contribution of the remaining unknown factor was measured as the residual factor. It was calculated by:

The analysis of variance for the 12 characteristics is presented in Table 1. It revealed that significant (P<0.1) differences were observed among the genotypes for all characters studied y. This gives an ample opportunity to plant breeders for improvement of these characters through selection. Similarly, the research finding of Abinasa [19] reported highly significant differences among durum wheat genotypes for days to heading, days to maturity, number of productive tillers per plant, plant height, spike length, spikilets per spike, thousand grain.

Table 1: Analysis of variance (Mean squares) for the 12 characters of 68 durum wheat accessions.

Table 2: Estimates of phenotypic (below diagonal bold) and genotypic (above diagonal not bold) correlation coefficients among yield and yield components in 68 durum wheat accessions tested at Kulumsa (2013/2014). 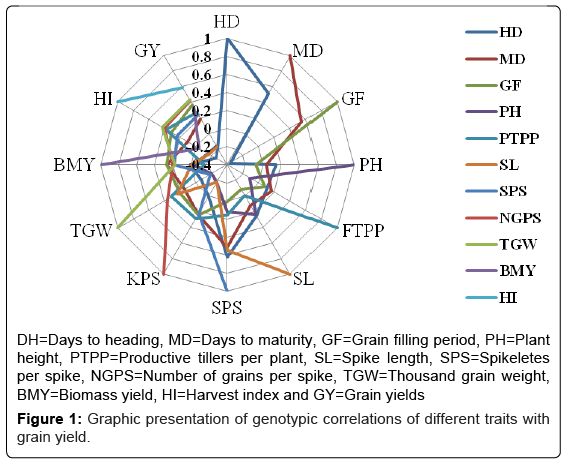 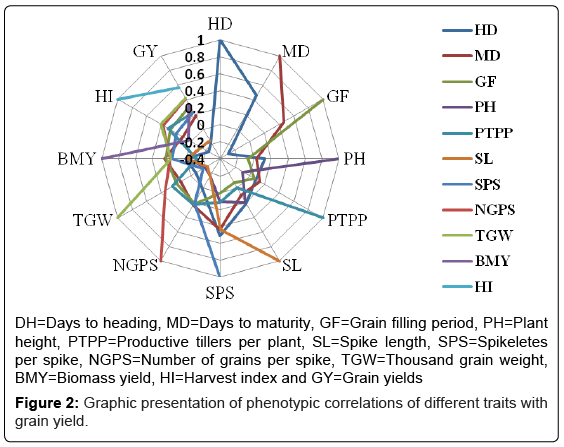 The association of maturity date with grain filling period displayed positive and highly significant at both phenotypic and genotypic levels (0.47**, 0.55**), indicating that the given durum wheat accessions required sufficient maturity time to posses more grain. It had also showed positive and significant association with spikelets per spike (0.44**, 0.51**), number of kernels per spike (0.23*, 0.24*) and biomass yield (0.26*, 0.27*) at both phenotypic and genotypic levels, indicating to improve these traits it needs long maturation time. This implies that to improve yield contributing traits in the study require enough maturation periods. The result is in agreement with Gashaw et al. [7].

The association of productive tillers per plant exhibited positively and highly significant to significant with number of grains per spike (0.23*, 0.29*), thousand grain weight (0.25*, 0.31**) and harvest index (0.31**, 0.38**), indicating that selection based on productive tillers per plant may lead to promotion of these traits. It contradicted the finding of Iftikhar et al. [28]. Spike length exhibited positively and highly significant with spikelets per spike (0.44**, 0.55**) at both phenotypic and genotypic levels. This showed the longer spike length may possess more numbers of spikelets and able to produce sufficient yield, so that selection based on this traits would improve the grain yield in durum wheat. The result is in agreement with Iftikhar et al. and Bilgin et al. [28,29]. It had also showed positive and significant correlation with thousand grain weight at genotypic level (0.24*).

Direct and indirect effects: The genotypic direct and indirect effects of different characters on grain yield are presented in Table 3. The results of path coefficient analysis of the study revealed that almost all characters exhibited positive direct effect except days to maturity, plant height and spike length. The maximum positive direct effect was exhibited on grain yield by harvest index (0.81**). It had also positive and highly significant genotypic correlation with grain yield makes the direct selection of this character is effective for yield improvement. The result confirms the finding of Abinasa et al. and Izzat et al. [19,32]. The indirect effects of this character were positive with grain filling period and number of kernels per spike. But, it had negative and negligible indirect effects for the rests of the traits. Therefore, harvest index, grain filling periods and number of kernels per spike should be considered in durum wheat breeding program designed to simultaneously improve grain yield.

Number of grains per spike revealed positive direct effects and positively high significant correlation with grain yield, it reflect that this characteristic is essential to improve grain yield directly. The indirect effects were showed positive for all characteristics except for days to maturity. It exhibited high positive indirect effects with harvest index, biological yield and grain filling period. Thus, the indirect selection of all these traits via number of grains per spike may evolve high yielding genotypes. This result is in agreement with Dogan [36] who reported direct positive effect of grain number per spike and 1000-grain weight on yield.

Thousand grain weight revealed weak positive direct effects and highly significant positive genotypic correlation with grain yield. The result indicated that even though it had weak positive direct effects, the correlation was strong because the positive and high indirect effects with harvest index, biomass yield, number of kernels per spike and grain filling period renders its correlation to be stronger. Residual effect in the present study was 0.195 (Table 3) which indicated the traits in the path analysis expressed the variability in grain yield by 80.5%.

The genotypic and phenotypic correlation of grain yield was positive and significant with grain filling period, number of productive tillers per plant, number of spikelet’s per spike, number of grains per spike, thousand grain weight, biomass yield and harvest index. Indicated that these characters contributed positively towards yield, and should be considered when selecting for high grain yield. Path coefficient analysis showed that biological yield and harvest index showed positive direct effect and highly significant positive correlation. Therefore, much attention should be given to them as there traits are helpful for direct selection.

The authors would like to thank Jimma University College of Agriculture and Veterinary Medicine (JUCAVM) and Kulumsa Agricultural Research Center (KARC) for their financial support.

Copyright: © 2016 Wolde T, et al. This is an open-access article distributed under the terms of the Creative Commons Attribution License, which permits unrestricted use, distribution, and reproduction in any medium, provided the original author and source are credited.