Trends of Cervical Cancer in Ethiopia

Copyright: © 2015 Abate SM. This is an open-access article distributed under the terms of the Creative Commons Attribution License, which permits unrestricted use, distribution, and reproduction in any medium, provided the original author and source are credited.

Introduction: Cervical cancer is a leading cause of mortality worldwide. According to the 2009 World Health Organization (WHO) report in Ethiopia 7619 annual number of new cases and 6081 deaths every year. Despite this fact, very few women receive screening services in Ethiopia.

Material and methods: Data on new cases of cervical cancer registered annually at the cancer registry of the Tikur Anbessa Specialize Hospital (TASH) over a period of sixteen years were obtained and analysed for trends using SPSS Version 20.

Discussion: The number of cases per regions depended on their distance from Addis Ababa unrelated to population size. This may be due to poor awareness, most women was present with late stage of cervical cancer.

Conclusion: There is the need to step up activities on; vaccination, screening programs and trainings on selfawareness for community.

Cancer is a group of more than 100 different diseases that are characterized by uncontrolled cellular growth, local tissue invasion, and distant metastases. It is now the leading cause of mortality in Americans younger than age 85 years [1]. Cancers that originate in the female reproductive system are called women’s reproductive cancers. These include cancer of the cervix, breast, ovaries, vagina, vulva and endometrium [2]. Cervical cancer is an important cause of death throughout the world, especially in less developed countries. Reports of trends in cervical cancer mortality from less developed countries have been limited by poor data quality and inaccurate population estimates [3]. It is also a leading cause of mortality worldwide with 270 000 women every year. But, 85% of these deaths occur in the developing world [4]. Cervical cancer is the second most frequently diagnosed cancer (80,400) and the leading cause of cancer death (50,300) in African women. Rates vary substantially across regions, with the incidence and death rates in East Africa and West Africa as high as the rates in North Africa [5].

According to the 2009 WHO report, the age-adjusted incidence rate of cervical cancer in Ethiopia is 35.9 per 100,000 patients with 7619 annual number of new cases and 6081 deaths every year [6]. Most of these Ethiopians often at an advanced stage by the time they seek screening services. Records show that of the nearly 22 million Ethiopian women over the age of 15, approximately 7,600 are diagnosed with cervical cancer and roughly 6,000 women die of the disease each year [7,8].

Despite this fact, very few women receive screening services in Ethiopia [9]. Although there is no national cancer registry, reports from retrospective review of biopsy results have shown that cervical cancer is the most prevalent cancer among women in the country followed by breast cancer [10]. Low level of awareness, lack of effective screening programs, overshadowed by other health priorities (such as AIDS, TB, malaria) and insufficient attention to women’s health are the possible factors for the observed higher incidence rate of cervical cancer in the country [11].

One major determinant for the prognosis of cervical cancer is the stage at which the patient presents [12]. Most patients in developing countries including Ethiopia present late with advanced stage disease, in which treatment may often involve multiple modalities including surgery, radiotherapy, chemotherapy, and has a markedly diminished chance of success. Several factors such as educational status, financial capability, location, presence of health care facilities determine the stage at which patients with cancer present to the health facility [3].

Ethical approval for this study was obtained from the Institutional Review Boards of Addis Ababa University Medical Faculty. The study conducted without individual informed consent because it relied on retrospective data. Data on new cases of breast cancer registered annually at the cancer registry of the Tikur Anbessa Specialize Hospital (TASH) over a period of sixteen years were obtained and analysed using MS Excel and SPSS version 20. The data were illustrated in table and the trend of the cases within the sixteen years was drawn using graphs.

A total of 16,622 new cases of cancer in the TASH registry data set were diagnosed between 1997 and 2012. Out of these 5293 (prevalence = 31.8%) were cervical cancer patients. There was also an average numerical increment yearly between 1997-2012. As Figure 1 shows that except in 1999 and 2009, there was yearly increment of cervical cancer patients new case registry with in study years. 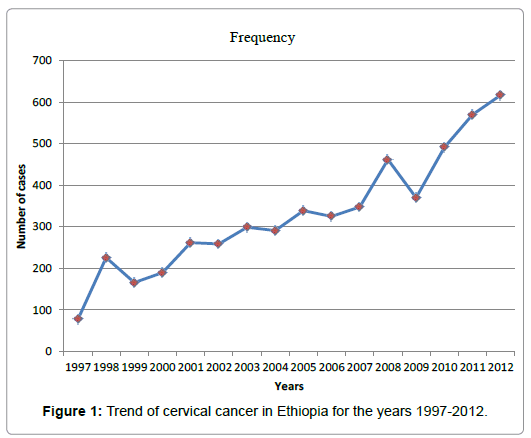 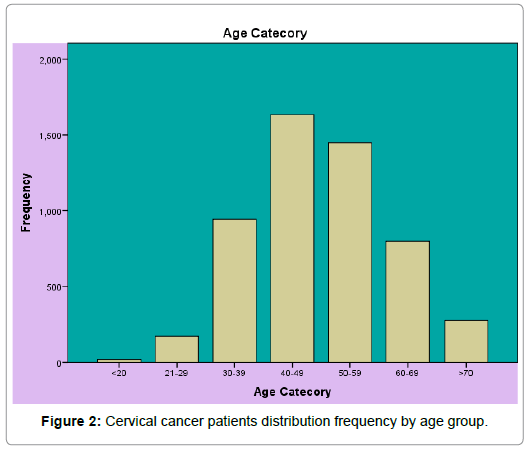 The proportion of women diagnosed at advanced stages of cervical cancer was higher than those diagnosed at an earlier stage. The cancer registration that based on International Federation of Gynaecology and Obstetrics (FIGO) staging criteria (Figure 3) showed that IIIB, IIB, IIIA, IVA, IVB, IIA, IB & IA covered 53.68%, 42.19%, 9.40%, 7.01%, 3.81%, 1.56%, 0.23% and 0.04% respectively. Age category and cervical cancer stage cross tabulation showed that stage IIIB, IIB, IIIA & IVA were more prevalent on; 40-49, 50-59, 30-39, 60-69, >70,20-29 & <20 years age group respectively as seen on Figure 4. Within the sixteen years of trend stage IIIB &IIB took the highest prevalence rate with annual increment. Stage IVA and IIIA covered an intermediate proportion with constant existence in the study year an average. The lowest percentage were covered by the earliest three stages (IA,IB & IIA) which relatively attend constantly which showed on Figure 3. 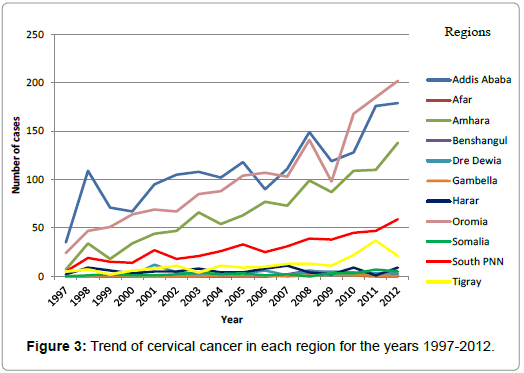 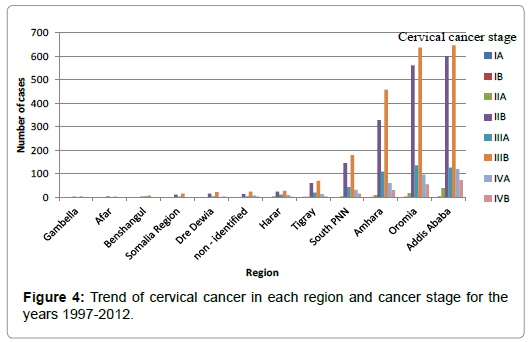 Figure 4: Trend of cervical cancer in each region and cancer stage for the years 1997-2012.

The trend of cervical cancer in the sixteen years is indicated in Figure 1. As the figure shows, the number of cases generally increases from year to year. The increase in number of cases from year to year may be due to the increase in the awareness of the people to be diagnosed or the increment of cases annually. Since Tikur Anbessa Specialized Hospital (TASH) is the only hospital in the country where cancer patients can be diagnosed and treated, the number of cases in Addis Ababa, where TASH is situated, is large. Currently in Ethiopia there are eleven regions, cervical cancer trend and distribution among these regions can be illustrated in the following figures (Figure 5). This Figure indicates that Addis Ababa, Oromia, and Amhara took (32.98%, 30.11% & 19.72% respectively) the higher proportion of cervical cancer patients with in sixteen years of trend. Where as Gambella, Afar and Benshangul regions were the least proportion of cervical cancer patients visit TASH for treatment respectively. There was a huge gap on cervical cancer patients flow among regions in Ethiopia. Figure 5 also shows there was relatively similar trend of patient distribution among regions with in sixteen years. For the past three years (2010-2012) Oromia region was higher than even Addis Ababa region. Somalia Region, Harar and Dre Dewia were relatively constant flow of patients but the rest regions were an average increment of cervical cancer cases with in sixteen years, Figures 6,7 and 8 show the comprehensive information. 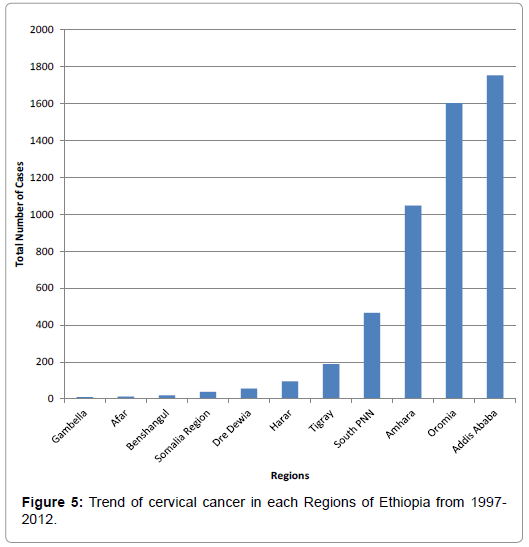 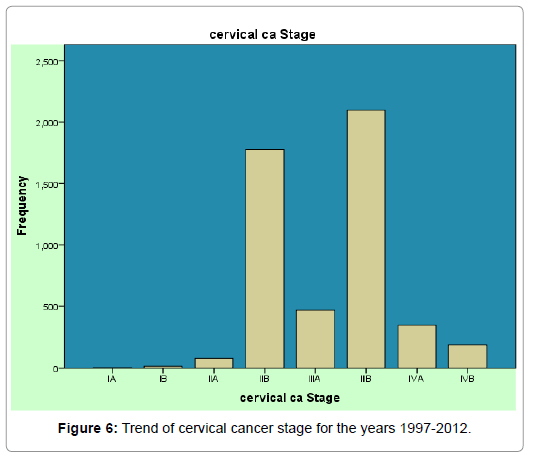 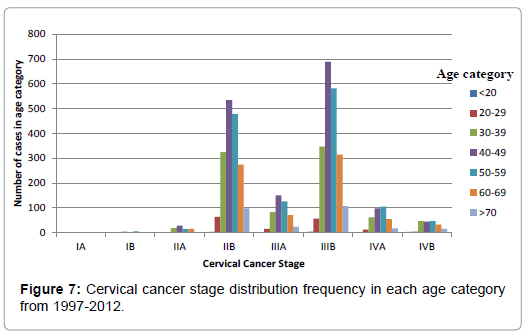 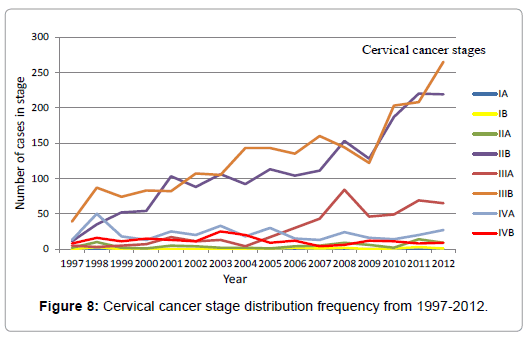 The main finding of the study is that the new case of cervical cancer has increased over the period of last sixteen years. Based on previous study on total cancer trends in Ethiopia showed that, the most common malignancy in female was gynecological malignancy (47%) followed by breast carcinoma (26%) [13]. Our study also confirmed that out of these gynaecological malignancies cervical cancer took the lion share. According to the 2009 World Health Organization (WHO) report, the age-adjusted incidence rate of cervical cancer in Ethiopia is 35.9 per 100,000 patients with 7619 annual number of new cases and 6081 deaths every year [8]. Despite this fact, very few women receive screening services in Ethiopia [9]. Since TASH is the only oncology center for diagnosis and treatment of cervical cancer patients in Ethiopia, the finding can show how much number of women diagnosed in the study period in country level. There were new cases of cervical cancer patients representing approximately 441 cases per year which indicate lower number of women were diagnosed than WHO expectation.

Contrarily, several reports in countries of North America [14], Latin America [15], and Asia [16] show a decreasing incidence rate and cervical cancer mortality was stable or slightly decrease during period analysed [17]. The highest age group of the patients was 40-49 years which is similar to studies done in Nigeria & USA on black populations and other parts of sub-Saharan Africa [18].

About 72% of the cervical cancer cases in this Sudanese study were diagnosed at an advanced stage. Older age, lack of insurance, African ethnicity, and rural residence were independent risk factors for the diagnosis of advanced cervical cancer. The risk was especially high in women with no health insurance [19].

The number of cervical cancer cases were not related to population size of the regions in Ethiopia at the study period. The number of cases in other regions of the country depends on their distance from Addis Ababa; the farther the region, the fewer the number of cases. Because, patients may not get opportunity to go and be diagnosed. Those patients who are relatively near to the hospital, such as patients in Addis Ababa, Oromia, and Amhara, are able to go the hospital and diagnosed. But, those patients who are far from the hospital are not able to go the hospital easily due to many reasons like transportation cost, accommodation, job and family related cases, etc. Similarly study [18] suggests distance from the hospital most likely influence the patient’s decision not to return to the hospital for continued care although there was no significant association between defaulting and having a personal income probably because most women in this environment rely on their husbands or parents for payment of hospital.

Within the past sixteen years stage IIIB, IIB, IIIA & IVA were took the first four steps yearly. In terms of region, these late cervical cancer stages were similar to total case distribution. The age category and stage association also showed that; age category 40-49, 50-59, 30-39 and 60- 69 years were took the higher percentage of late stage visitor women.

Since cervical cancer belongs to the group of cancers that are preventable & treatable by vaccination of HPV and by early screening diagnoses the study was expect declining incidence of cervical cancer with in sixteen years. Oppositely there was increasing cervical cancer incidence yearly in this study and this may due to poor awareness of people to; vaccination against HPV, early screening diagnosis and treatment or more cancerous patients are there in the country and inadequate control measure to stem its morbidity due to diversion of the health care system. Therefore, there is the need to step up activities on; vaccination, screening programs and trainings on developing selfawareness for community on cervical cancer. In addition, it will be important to open cancer diagnosing and treatment centres in each region of the country. Additional researches on; cervical cancer post treatment survival rate, on risk factors assessment, patient quality of life and others are recommended in future. This hospital based cancer registry was older which needs integration with WHO International Coding system.

The author would like to thank the staffs of Oncology unit of TASH for their cooperation during collection of the data.