Value of Repetitive Transcranial Magnetic Stimulation of the Motor Cortex in the Management of Refractory Cancer Pain in Palliative Care: A Case Report

Copyright: © 2013 Denis N, et al. This is an open-access article distributed under the terms of the Creative Commons Attribution License, which permits unrestricted use, distribution, and reproduction in any medium, provided the original author and source are credited.

A large proportion of cancer patients experience chronic pain [1]. Cancer pain may correspond to nociceptive pain generally relieved by the administration of opioid analgesics [2], neuropathic pain requiring the use of specific medications such as anticonvulsants or antidepressants [3,4], and often mixed pain. Pain can become difficult to control at the terminal phase of cancer due to the mixed nature of the pain and the need to administer high-dose drug combinations [5], often accompanied by drowsiness, which contributes to deterioration of the quality of the end of life [6]. We report the case of a patient whose pelvic pain was able to be controlled by 5 repetitive transcranial magnetic stimulation sessions. In particular, the marked reduction of analgesic medications, measured by the Medication Quantification Scale (MQS) [7] score, allowed return to a normal level of consciousness and allowed the patient to be married under acceptable conditions before her death, as she had wished.

In August 2009, a patient of 23 years old had several episodes of haematochezia, leading to the discovery of adenocarcinoma of the rectum. Treatment consisted of radiotherapy and abdominopelvic resection in February 2010, followed by chemotherapy. She presented local disease progression despite this treatment with the discovery of peritoneal carcinomatosis in October 2011 with liver and lung metastases. The health status of the patient gradually deteriorated with increased abdominal and pelvic pain, which partly corresponded to nociceptive pain, due to compression by the tumor. This pain was initially treated by oral morphine at a daily dose of 40 mg, which was increased to 200 mg after 4 months. She also had neuropathic pain (DN4 score: 7/11 [8]), as a consequence of surgery and radiotherapy. This pain was treated by a combination of pregabalin (300 mg daily) and intravenous amitriptyline (gradually increased to a dosage of 100 mg daily). The patient continued to experience pain despite this treatment with a Numerical Rating Scale (NRS) varying between 8 and 10/10. She also suffered from drowsiness and intellectual slowing that fluctuated with the dose of drugs and that confined her to bed. She was also taking antidepressant and anxiolytic treatment in the context of psychiatric follow-up and received regular psychological support. In this context, she was admitted to the Palliative Care Unit of our Federative Pain-Palliative and Supportive Care Centre in December 2012. During her brief periods of lucidity, this patient informed us about her desire to organize a wedding ceremony. She wanted a wedding ceremony taking place under the usual conditions, including a civil ceremony at the town hall and a religious ceremony. This project appeared to be impossible unless the drug doses could be decreased in order to limit their adverse effects. Initiation of NMDA receptor antagonist (ketamine) treatment failed to decrease pain or the doses of major opioids. Intrathecal administration of morphine after implantation of an injection port was also ineffective and the procedure had to be stopped after 10 days. Introduction of midazolam was minimally effective and accentuated the patient´s drowsiness. The MQS score used to quantify therapeutic doses was then 126 (Figure 1). 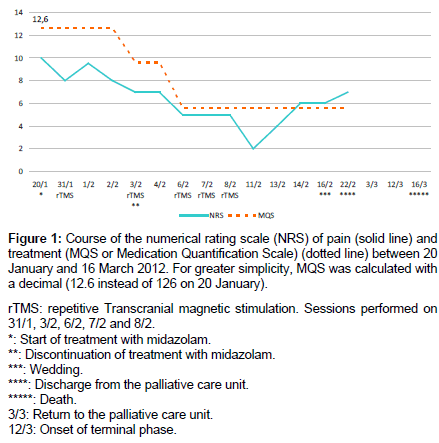 Figure 1: Course of the numerical rating scale (NRS) of pain (solid line) and treatment (MQS or Medication Quantification Scale) (dotted line) between 20 January and 16 March 2012. For greater simplicity, MQS was calculated with a decimal (12.6 instead of 126 on 20 January). rTMS: repetitive Transcranial magnetic stimulation. Sessions performed on 31/1, 3/2, 6/2, 7/2 and 8/2. *: Start of treatment with midazolam.
**: Discontinuation of treatment with midazolam.
***: Wedding.
****: Discharge from the palliative care unit.
*****: Death.
3/3: Return to the palliative care unit.
12/3: Onset of terminal phase.

At that time, a therapeutic trial of motor cortex stimulation by rTMS was proposed, since we already had good results in two cases of refractory pelvic and perineal pain [9]. The patient received stimulation of the right motor cortex, in the zone corresponding to the representation of the perineal region [10] for 20 minutes with the following parameters: 20 trains of 10 seconds at 10 Hz to 80% of the resting motor threshold with an inter-train interval of 50 seconds (2000 stimuli). The patient experienced a marked improvement of her pain over the days following the first rTMS session. Medical treatment was able to be rapidly decreased by about 50% (MQS score decreased to 96 and then to 56) (Figure 1), which restored an almost normal level of consciousness and lucidity throughout the day. She was also able to resume walking. In parallel, we observed a reduction of her anxiety and depression symptoms. However, antidepressant treatment was maintained, but the doses of benzodiazepines were able to be reduced by one half. Four other rTMS sessions were performed to maintain this result. The patient was able to celebrate her wedding under the conditions that she had desired. Progress of her disease inevitably led to her death 6 weeks later in a context of bowel obstruction.

Pain related to cancer progression, when it persists or occurs in the context of the end of life, often raises complex management problems [6]. High doses of analgesics and co-analgesics and combined management of the neuropathic and nociceptive components are often necessary to relieve the patient´s pain. Nociceptive pain is generally well controlled by the use of WHO step 3 opioids [11]. This treatment can be administered either orally, parenterally or intrathecally [12]. Despite these various modes of administration, some patients experience severe adverse effects of these treatments and some patients also continue to experience nociceptive pain that is relatively refractory to morphine [10,13]. Similarly, treatment of some forms of neuropathic pain may require the use of high doses of anticonvulsants and antidepressants resulting in major drowsiness and further decreasing the patient´s quality of life [14,15]. In terminal patients experiencing mixed pain, the combination of several therapeutic classes with potentiation of their respective adverse effects often results in severe drowsiness and a very marked impairment of quality of life. All personal or family projects become very difficult or even impossible in this setting.

Noninvasive brain stimulation by rTMS is a relatively new approach for the treatment of pain disorders [16]. We previously reported the beneficial analgesic effect of motor cortex stimulation by rTMS in two cases of non-cancer pelvic pain [9]. The use of rTMS, as adjuvant therapy in the context of multidisciplinary management provided by a palliative care unit, appeared to be a potentially useful approach, with a favourable benefit/risk balance. rTMS has been shown to be effective on both chronic pain (especially but not only of neuropathic origin) and depression. It is generally associated with excellent safety and the rare adverse effects are usually only minor [16,17]. The target for the treatment of chronic pain is the precentral motor cortex, rather than somatosensory cortical areas. It may first appear surprising, but the relevance of this target was confirmed by many studies that have provided convincing evidences for the efficacy and mechanisms of action of invasive and noninvasive motor cortex stimulation [16-19]. It has also been regularly observed that, even in the case of bilateral or midline pain, as in the present case, stimulation on only one side could be sufficient [9]. Normally, the rTMS target used to treat depression is the dorsolateral prefrontal cortex [20]. A concomitant improvement of pain and depression, as the affective component of pain, was already observed in chronic pain patients treated by motor cortex stimulation [21]. This combined effect could be particularly useful in the context of the end of life. In the present case, a series of five rTMS sessions in a week allowed a significant reduction of analgesics that led the patient to recover a sufficient level of consciousness, lucidity and motivation to complete a complex project at the end of life such as the organisation of her wedding.

In the context of palliative care of cancer pain patients at the end of life, motor cortex rTMS can be used as an adjuvant therapy likely to improve various components of pain, including the emotional-affective components such as depression. In addition, by reducing the doses of analgesics, rTMS decreases the severity of their adverse effects, which can lead to a marked improvement in the quality of life of the patient.