Copyright: © 2011 Lu DM, et al. This is an open-access article distributed under the terms of the Creative Commons Attribution License, which permits unrestricted use, distribution, and reproduction in any medium, provided the original author and source are credited.

Corynebacterium Glutamicum (C. glutamicum) is a gram-positive soil bacterium that is widely used for the production of a variety of amino acids. The ability of C. glutamicum strains to produce certain amino acids results from several improvements made through repeated random mutations and selection [1-3]. L-ornithine is an important constituent of the urea cycle and the precursor of other amino acids such as citrulline, glutamic acid, and proline. It plays key function to discharge amino nitrogen and solve ammonia toxicity. Recently, Lornithine is widely applied in the fields of the function beverage, diet, health care, liver-protecting, anticancer, and in the food and medicine industry [4-6].

However, to our knowledge, there is no report on optimization of L-ornithine production by engineering strain. Response surface methodology (RSM) has successfully been applied in optimization of bioprocess [17-22]. It can be used to evaluate the relationship between a set of controllable experimental factors and observed results. The interac- tion among the possible influencing parameters can be evaluated with limited number of experiments. In this study, statistical optimization of the fermentation medium was carried out in order to develop an industrial fermentation of L-ornithine by engineering Corynebacterium Glutamicum (ΔargFΔproBΔkgd). The preliminary one-factor-at-a-time approach was used to obtain the critical components of the medium. Then, the important factors were selected out by Plackett-Burman design. Finally, the RSM was employed to build models to evaluate the effective factors and to study their interaction and to select optimum conditions. L-ornithine production was enhanced by 197% under optimized conditions, compared to that under original conditions. On the other hand, the process of L-ornithine production of the engineered strain in a 5 L bioreactor was also characterized. L-ornithine production reached 18.17 g/L at 60 h of fermentation, which is the highest level in engineered strain at present.

The seed medium was grown at 30°C in the rotary shaker at 150 rpm for 20 hours. For L-ornithine fermentation, a 1.0-ml sample of the seed culture was inoculated into 10 ml of the fermentation medium in a 100-ml rotary flask and cultivated at 30°C and 150 rpm for 72 hours. Triplicate experiments were carried out and the mean value was calculated.

This design does not consider the interaction effects among the variables. Fourteen variables were screened in sixteen experiments with one dummy variable. The experimental design is shown in Table 1 (Hadamard matrix). Each variable was represented in two levels namely a high level denoted by (+) and a low level designated by (−). All experiments were performed induplicate and the average of L-ornithine production after 72 h was taken as the response (Y). The variables whose confidence levels greater than 85 % were considered to significantly influence L-ornithine production.

Central composite design: The central composite designs are composite designs formed from two-level factorials by the addition of just enough points to estimate curvature and interaction effects. It was generated by Design Expert software (version 7.1.3, Stat-Ease Inc., Min neapolis, USA) to estimate the response of the dependent variable. In this study, A 23 factorial central composite experimental design with four start points (α = 1.68) and six replicates at the central point were adopted. According to this design, 20 experiments were used to optimize the screened variables grouped as yeast extract (x1), NH4 (SO4)2 (x2) and MgSO4·7H2O (x3). The experimental design is shown in Table 2 and Table 3. The variables were coded according to the equation (2):

Table 2: Range of different factors studies in the CCD design

L-ornithine production of the engineered strain in the 5L bioreactor

For L-ornithine fermentation, 10% (v/v) of 20 h inoculum were inoculated into 3.5 L of the fermentation medium in a 5 L bioreactor (Biostat B5, B. Braun Biotech International Diessel GmbH, Germany) and cultivated at 30°C. NH4OH was used to control PH of the above medium. Antifoam was added manually as needed. The initial aeration rate was 1.0 L/L/min and the agitation rate was 800 rpm. When dissolved oxygen was below 15%, the aeration rate was increased to 1.5 L/L/min until the end of fermentation. OD600, residual glucose concentration and L-ornithine production assay of the broth were carried out every some time.

Cell growth was monitored by measuring the optical density of the culture at 600 nm (OD600) using a spectrophotometer (Shimadzu Corporation, Japan) after dilution of the culture with 0.2M HCl to dissolve CaCO3. L-ornithine concentrations were determined by the colorimetric method with Ninhydrin as described previously [13,23]. Glucose concentration was determined the colorimetric method based on the phenol-sulfuric acid reaction [24].

a Data represent the mean of the triplicate cultures±standard deviation

In C. glutamicum ATTC13032 (ΔargFΔproBΔkgd), the flux of the downstream of 2-oxoglutarate was weakened because of the deletion of kgd gene. Increasing the flux of the downstream of 2-oxoglutarate by supplement of tricarboxylic acid cycle intermediates may be beneficial to growth and production. Thus, we investigated the effect of tricarboxylic acid cycle intermediate (KAc and succinic acid) on L-ornithine production. Figure 1 shows that the effect of different ratio of KAc and succinic acid on growth and L-ornithine production. The highest Lornithine production and growth were obtained with 5:5 of the ratio of KAc and succinic acid. Addition of tricarboxylic acid cycle intermediates also resulted in the increase of production of poly (γ-glutamic acid) (36.9 %) by Bacillus licheniformis [25]. L-ornithine is formed from glutamate as poly (γ-glutamic acid). Wendisch et al. [26] showed a two- to fourfold higher carbon flux into tricarboxylic acid cycle when C. glutamicum cells were grown in the presence of acetate. Their further studies showed that the expression of genes of glyoxylate cycle (aceA and aceB) was upregulated in the presence of acetate [27]. Yu et al. [28] reported that glyoxylate cycle is required for the overproduction of glutamate and the glutamate production was insignificantly inhibited after aceA gene deletion. 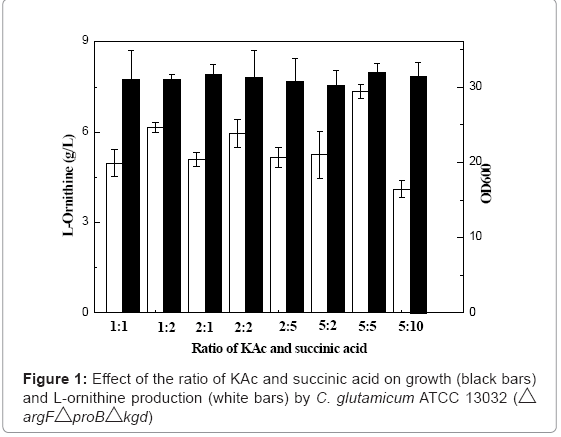 Effect of trigger on L-ornithine production

aData represent the mean of the triplicate cultures±standard deviation

Table 6: Results of the screening of culture of L-ornithine production

Coefficients of X1, X3, X4 and X5 were negative, meaning that the path of the steepest ascent should decrease the concentration respectively in order to enhance the L-ornithine production. The center point of the Plackett-Burman Design was considered as the origin of the path. The experimental design and responses of the steepest ascent path experiments were given in Table 7. It was clearly seen that the yield profile showed a maximum at run 3. Because glucose was used as carbon source and the skeleton of L-ornithine, (NH4)2SO4, MgSO4·7H2O and yeast extract were chosen for further optimization by RSM.

Optimization of the screening culture conditions by response surface methodology

Yeast extract (x1), (NH4)2SO4 (x2), and MgSO4·7H2O (x3) were selected and optimized using central composition design (CCD). The CCD of three variables in coded and real levels was shown in Table 2. The experimental design and the experimental and predicted response of the L-ornithine production at 3 days were shown in Table 3. By applying multiple regression analysis on the data obtained from the CCD experiment, the following second order polynomial equation was proposed to calculate the optimum levels of these variables and to explain the L-ornithine production.

Statistical testing of the model was done by the Fisher’s statistical test for analysis of variance (ANOVA) and the results were presented in Table 8. The fit of the model was checked by the coefficient of determination (R2), which was calculated to be 96.62%, indicating that 96.62 % of the total variability in the response could be explained by this model. Values of ‘Prob > F’ less than 0.05 indicate model terms are significant.

Table 8: Analysis of variance (ANOVA) for the selected quadratic modela

Table 9: The least-squares fit and the parameter estimates (significance of regression coefficient) 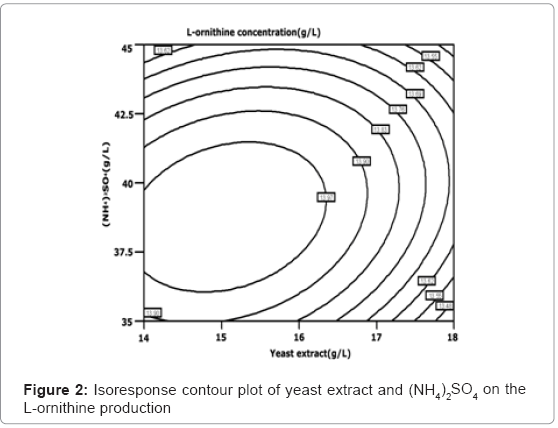 Figure 2: Isoresponse contour plot of yeast extract and (NH4)2SO4 on the L-ornithine production 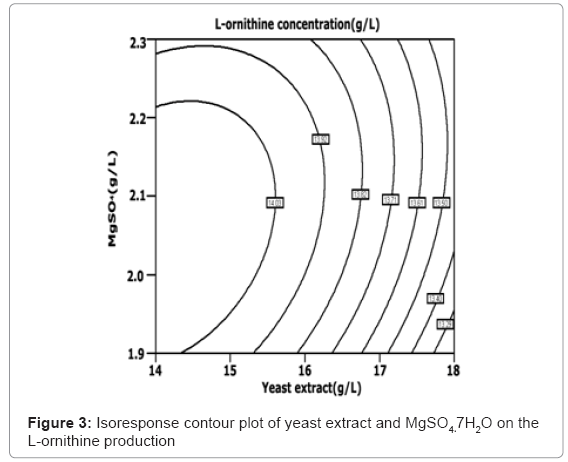 Figure 3: Isoresponse contour plot of yeast extract and MgSO4·7H2O on the L-ornithine production 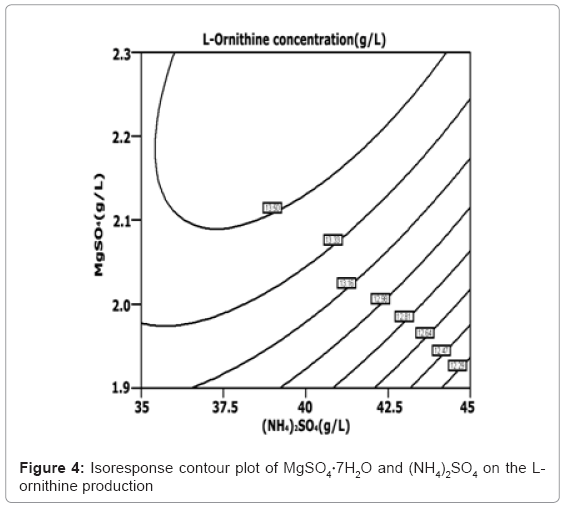 Figure 4: Isoresponse contour plot of MgSO4·7H2O and (NH4)2SO4 on the Lornithine production 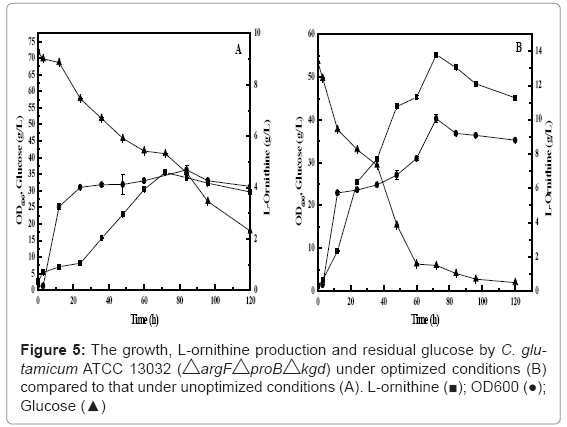 The results of the cell growth, L-ornithine production and residual glucose by the engineered strain in the 5 L bioreactor are presented in Figure 6. Cell growth rapidly went into exponential growth phase and then into station phase after 20 h. The glucose consumption rate increased significantly after 3 h, and then reduced between 20 and 40 h. Thereafter, it increased again in order to produce L-ornithine and finally decreased after 56 h. The level of L-ornithine increased progressively at the first 2 days and then enhanced sharply to reach the maximum 18.17 g/L at 60 h. From Figure 6, we can also find that the concentration of L-ornithine became to decrease sharply after 60 h, whereas glucose was still consumed. We also found that the value of PH after 60 h also increased rapidly (Data not shown). The reason may be that L-ornithine could be converted to polyaminime because the expression level of spermidine synthase of the engineered strain cultured in flask after 72 h was about 5 fold higher than that of the parent strain ATCC 13032 [13]. But the real reason should be further study. 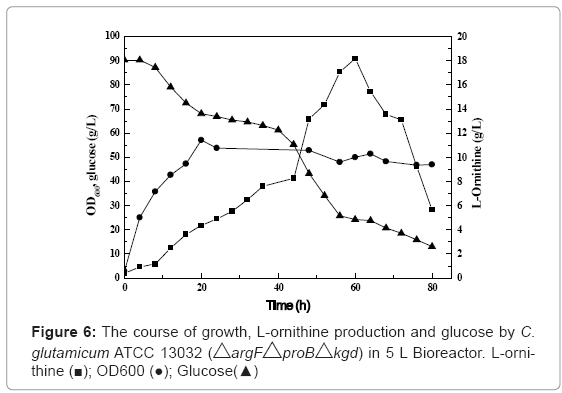 The maximum L-ornithine production of 18.17 g/L at 60 h, which is unprecedented in engineered strain, was obtained. The level of Lornithine production is 9 times higher than that (2 g/L) of the classically obtained auxotrophic mutant Brevibacterium ketoglutamicum BK533 in a batch culture [14]. However, it is lower than that (74 g/L) of the auxotrophic mutant Brevibacterium ketoglutamicum BK533 in a fed-batch culture by shorten the mixing time of the limiting nutrient in the fermenter [16]. The engineered strain should be further modified by knockout and overexpression of key genes to improve L-ornithine production. The yield may be also enhanced by fed-batch fermentation technology. The further modification of the engineered strain and fedbatch fermentation are currently underway in our lab. The results will be reported shortly.

Optimization of fermentation conditions was carried out by onefactor- at-a-time, Plackett-Burman, steepest ascent design and response surface methodology. Tween 80, tricarboxylic acid cycle intermediates (KAc and succinic acid) were beneficial to L-ornithine production. The important factors, glucose, (NH4)2SO4, MgSO4·7H2O and yeast extract, were selected out using Plackett-Burman design. Then their response region close to the maximum production was obtained by using steepest ascent design. An optimized fermentation medium was obtained by using response surface methodology (g/L): 37.94 (NH4)2SO4, 1.58 MgSO4·7H2O and 13.99 yeast extract. The optimization resulted in the increase of L-ornithine production of 197 % compared with that under original conditions. 18.17 g/L of L-ornithine production was obtained in the 5-L bioreactor at 60 h, which is the highest level in engineered strain at present.