The Sharps injuries in health care facilities are well-known risk for Health Care Workers (HCW). Blood born viruses are greatly transmitted through the percutaneous penetration of sharps. The fractions of blood born viral infection attributed to the sharps injuries in HCWs are 37%, 39% and 4.4% for HBV, HCV and HIV respectively [1].

The ophthalmology speciality consists of medical and surgical components with predominance of surgical components in eye specialist hospitals. In general, surgical injuries continued to increase during the period that nonsurgical injuries decreased significantly [2]. In addition to that, the microsurgery nature of ophthalmology increases the risk of sustaining sharps injuries [3]. An old retrospective study done by Mansour [4], to determine the needle-stick injury rate among employees of the department of ophthalmology versus the other departments found that ophthalmologists had the highest incidence per person of needle injuries among physicians [4]. In a German study done by Sabine Wicker et al. addressed the risk of needle-stick injuries from occupational medicine viewpoint found among his results that the frequency of needle-stick injuries in ophthalmology speciality was 28.6% [5]. Furthermore, the events of sharps injuries in ophthalmic practice are not fully reported. In one study, 50% of sharps injuries were not reported [6].

The post exposure protocol consists of serology tests and administration of immunoglobulin and hepatitis B vaccine to the unvaccinated or non- respondents and those with low level of anti- HBs (<10 mIU /ml). The previously vaccinated employees with adequate level of anti- HBs (≥ 10 mIU/ml) need no hepatitis B vaccine. The post exposure blood tests for HCV and HIV used to be done at 1, 3, and 6 months from the time of sharps injuries if the source blood which contaminated the sharp object was positive or the source blood is unknown but the victim was from high-risk groups. The post exposure blood test to HBV used to be done at 1 and 6 months of exposure if the source blood was positive or unknown and the victim was not immune.

The surveillance system defined sharps injury as percutaneous penetration of sharp object whether contaminated or not by blood or other bodily fluid. The surveillance collects data on the demography, the job category (doctor, nurse and technician and allied workers), and the place of injury, the site of injury, the tool of injury, and the tasks that were performed during the sharps injuries. The allied workers here are the cleaners who collect the medical waste.

Data entry and analysis were done by using Epiinfo 3.5.1.

A total of 42 sharps injuries were recorded from Dhahran eye specialist hospital over the 7 years period from 2006 to 2012.

The Serology tests were done in 97.6% (n = 41) of the injured health care workers and none of them was found to be positive for any of HBV, HCV and HIV during the 6 months follow up period. We were able to identify and test the source of blood which contaminated the sharp object in 85.7% (n = 36) of events. All of the tested samples were negative for HBV, HCV and HIV. Six injuries were sustained with uncontaminated needles. 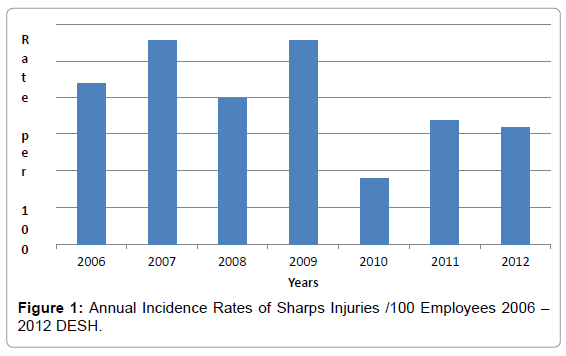 Although the technicians were the majority of injured HCWs in operation room (OR) but the doctors (ophthalmologists) sustained the sharps injuries only in OR. This is because OR is the place where the ophthalmologists have greater exposure to varieties of instruments and sharps; they focus on small field of surgery and apply different techniques and maneuvers.

Most of the sharps injuries sustained by the technicians occurred during passing the instruments to others who will use them i.e. they are not the original user of the instrument or device. This finding was reported in surgical settings [2].

The predominance of the nurses among HCWs injured by the recapping of the needle can be attributed to their greater exposure to needles in several places including laboratory, clinic, OR, ward, and ER as part of their jobs.

The disposal and/or cleaning of the waste was the least common in this hospital in contrast to the findings reported by another researcher in ophthalmic practice where the disposal of the waste was the most common circumstance for the sharps injuries [4]. This can be due to the underreporting of the sharps injuries by victims. The cleaners who collected and disposed of the waste are illiterate or semi-illiterate, non- local people and had misconception regarding job security if they notify injuries. This was discovered after the observation of covered injuries in the hands of some of them when they disclosed the reasons of no notification of their sharps injuries.

The Limitations of the Study

The self- reporting system results in underreporting of events. This might be true for the repeated injuries to the same person but would be very unlikely for the first injury, as the injured HCW needs to alleviate anxiety and seek medical advice and post exposure measures.

The small size of the sample does not allow for detailed analysis with accuracy that can be generalized.

This study showed special pattern of sharp injury in ophthalmic practice different from what is known in general health care settings.

• The majority of the sharps injuries occurred in operation room (OR) during the handling of the instruments.

• In operation room, the technicians were the majority of injured HCWs and sustained most of their sharps injuries while passing the instruments.

• The ophthalmologists were exclusively sustained the sharps injuries while in operation room during performing the procedures.

• The frequency of the sharps injuries can substantially be reduced by target education to the technicians and the nurses [15,17-20].

• The ophthalmologists should evaluate methods to reduce sharps injuries in OR.

Copyright: © 2013 Alshihry AM. This is an open-access article distributed under the terms of the Creative Commons Attribution License, which permits unrestricted use, distribution, and reproduction in any medium, provided the original author and source are credited.