Copyright: © 2012 Haile G, et al. This is an open-access article distributed under the terms of the Creative Commons Attribution License, which permits unrestricted use, distribution, and reproduction in any medium, provided the original author and source are credited.

A total of 240 alkaliphilic bacteria were isolated from samples collected from alkaline soda lakes of Ethiopia and were screened for the production of alkaline proteases. Of these, 30% were protease positive indicating the abundance of protease producing microorganisms in these habitats. The Bacillus sp. designated as C45 that grow in solid state medium was selected based on the property of the enzyme for further study. The protease produced by the Bacillus sp. was active in the pH range of 6.5-11.5, with optimum activity at pH 8-9; and stable at alkaline pH. The optimum temperature for activity was 40°C and 50°C in absence and presence of 5 mM of Ca+2, respectively. The enzyme displayed appreciable activity and stability at low temperature. These properties suggest that protease C45 could find potential application for dehairing and detergent at moderate temperature. When protease C45 was added to raw hide it enabled dehairing, suggesting the potential usefulness of the enzyme in the leather industry.

Proteases are essential constituents of all forms of life on earth which are classified based on chemical nature of the active site, the reaction they catalyze, and their structure and composition [1]. The major classes are again classified in to sub classes based on pH, catalytic site on polypeptide, occurrence, and so on. Based on the catalytic site on the substrate, proteases are mainly classified in to endoproteases that prefer to act at the inner region of the polypeptide chain and exoproteases preferentially act at the end of the polypeptide chain [1]. Based on their optimal pH proteases are also classified as: acid proteases which are active in the pH ranges of 2-6 [1] and are mainly of fungal in origin [2] , alkaline proteases which are optimally active in the alkaline range (pH 8-13), though they maintain some activity in the neutral pH range as well [3] and are obtained mainly from neutralophilic and alkaliphilic microorganisms such as Bacillus and Streptomyces species, and neutral proteases which are active at neutral, weakly alkaline or weakly acidic pH and are mainly of plant in origin [2]. Neutralophilic and alkaliphilic microbial alkaline proteases that are isolated from alkaline soda lakes possess a considerable industrial potential due to their biochemical diversity and stability at extreme pH environments, respectively [4]. These application areas include: as processing aid like dehairing in leather tanning industries [5], as detergent additive to remove dirt and stains that are difficult to remove [1,6], in protein hydrolysis for production of high quality protein hydrolysates [1], in silver recovery from waste X-ray films [7,8], in pharmaceuticals production, and in chemical synthesis [9]. Ethiopia is endowed with a range of alkaline habitats in Rift valley region. However, only few reports have been found on isolation of alkaline protease producers from these soda lakes [10,11]. Therefore, the aim of this study was to isolate proteolytic alkaliphilic bacteria from Ethiopian soda lakes and characterize its enzyme.

Proteolytic activity in the culture supernatant was determined by using casein as a substrate. A mixture of 450 ml of 1% (w/v) of casein in 50 mM Tris-HCl buffer, pH 8.5 and 50 ml crude enzyme extract were incubated in a water bath at 40ºC for 20 minutes. After 20 minutes, the enzyme reaction was terminated by the addition of 500 ml of 10% (w/v) Trichloroacetic acid (TCA) and was kept at room temperature for 15 minutes. Then, the reaction mixture was centrifuged to separate the unreacted casein at 10,000 rpm for 5 minutes. Sample containing 500 ml supernatant was taken, and mixed with 2.5 ml of 0.5 M Na2CO3. After adding 0.5 ml of 1 N Follin Ciocalteus phenol reagent, the mixture incubated in the dark for 30 minutes and absorbance measured at 660 nm against a reagent blank. One U corresponds to the amount of enzyme required to release 1 micromole of amino acid equivalent to tyrosine per minute under the standard assay conditions.

Test for potential use in enzymatic dehairing

Two set of cow hides were washed and cut into 10 × 15 cm pieces. One set from the pairs (controls) was put in to flask containing buffer solution. The other halves were put in to flasks containing enzyme solution by keeping liquid (ml) to gram hide proportion one to one [12-14] shaker (121 rpm) at room temperature for 24 hrs. To asses dehairing extent, one flak at a time taken for hair removal trail with fingers. The skin pieces after treatments were examined for dehairing time, dehairing extent, and scud.

Effect of temperature on activity and stability of the protease 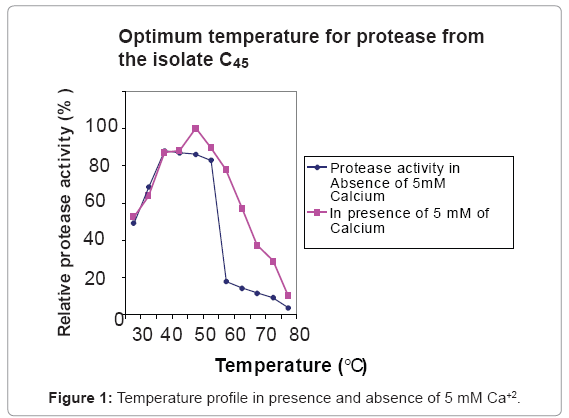 Figure 1: Temperature profile in presence and absence of 5 mM Ca+2.

The alkaline protease was stable at moderate temperatures (30ºC to 50ºC (Figure 2)). The enzyme was completely inactivated after 30 minute incubation at 60ºC and 10 minutes incubation with buffer at 70ºC indicating potential applicability to reduce operating energy and cost in protease assisted industrial process such as washing and dehairing [1,15]. 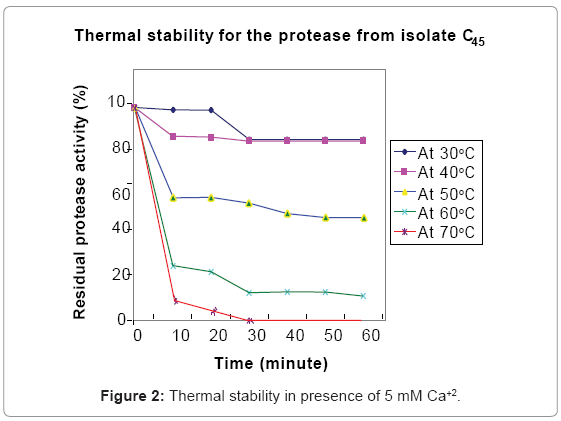 Effect of pH on activity and stability of the protease C45 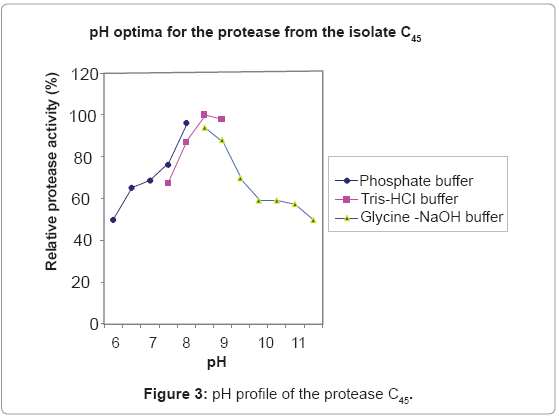 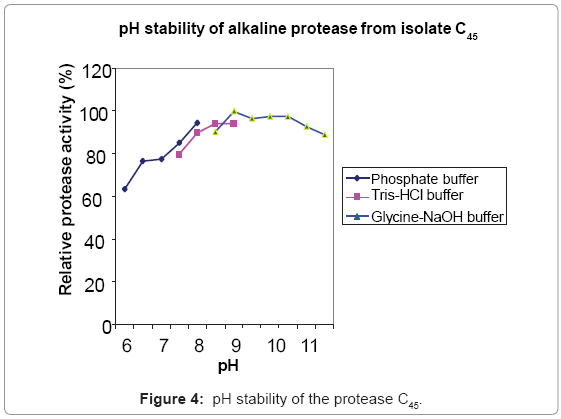 The enzyme produced by the bacillus isolate C45 under SSF was further characterized to evaluate its potential usefulness for different applications. The protease from this isolate was optimally active between pH 8-9 and stable at alkaline pH. Proteases active in the pH range of 8-12 and stable at alkaline pH are known as potential candidates for detergent application, dehairing of hides, and silver recovery from waste X-ray and photographic films [1,6,9]. This indicates that protease C45 has a good potential for such applications.

The protease was stable and maintained 100% of its original activity after hour incubation with 2 M NaCl. The observed stability at high ionic strength was due to the presence of high proportion of acidic amino acids such as glutamic acid on its surface [16]. This high salt tolerance of the enzyme implies its importance to use for bioorganic synthesis for protease assisted peptide synthesis [17]. Halophilic protease production has been also reported in alkali tolerant Bacillus patagoniensis [15] and by other halophilic and alkaliphilic bacterial isolates [18,19] at 2 M NaCl.

Therefore, stabilizing ability of active site conformation even in presence of high competing solutes for water and at dry state by halophilic enzymes show their usefulness in proteases assisted synthesis of unique chemicals.

The enzyme produced by the bacillus isolate C45 under SSF was further characterized to evaluate its potential usefulness for dehairing of hides (Figure 5). Complete removal of hair achieved with in 12 hrs with low scud and visible natural hide pore. Proteases active in the pH range of 8-12 and stable at alkaline pH are known as potential candidates for detergent application, dehairing of hides, and silver recovery from waste X-ray and photographic films [1,6,9]. This indicates that protease C45 has a good potential for dehairing applications in leather industries. Based on the results of this work, the following conclusions can be drawn:

• The alkaline protease produced by this Bacillus sp. was active and stable at high alkaline and salt concentration.

• Hide dehairing experiment at laboratory also confirmed the usefulness of this enzyme for application in leather industries.

2. Testing the alkaline protease from C45 for other suggested potential industrial applications.

3. Test of the enzyme dehairing capability at the tannery experimental level.

I would like to thank Dr. Amare Gessesse for his support and guidance throughout the course of this study.