Copyright: © 2013 Ferrell JR, et al. This is an open-access article distributed under the terms of the Creative Commons Attribution License, which permits unrestricted use, distribution, and reproduction in any medium, provided the original author and source are credited.

Bioartificial liver (BAL) systems are designed to assist malfunctioning livers in patients with various liver diseases. Such systems are composed of a bioreactor device together with functional hepatocytes. It is expected that almost all liver functions, except for the secretion of bile, would be compensated for by BAL systems. Historically, a variety of cells have been studied as sources for the embedded hepatocytes in BAL applications. For example, primary human hepatocytes, immortalized cell lines of C3A human hepatoblastoma cells, liver progenitor cell line HepaRG and cryopreserved porcine hepatocytes have been researched [1-7]. Some of them have even been explored in clinical investigations [8-13]. On the other hand, the recent development of induced pluripotent stem (iPS) cell technology has enabled us to generate stem cells by genetic reprogramming of somatic cells, and differentiating them towards functional hepatocytes [14-18]. Recently, we reported preliminary data for an iPS cell-oriented BAL system and demonstrated the basic concept of this system [19]. Here, we summarize the advantages and disadvantages of iPS cell-oriented BAL systems. Problems awaiting solution before clinical application are also discussed.

In BAL systems, the bioreactor devices serve as a container for embedded hepatocytes. The module enables mass transfer between patient’s blood and embedded hepatocytes through semi-permeable hollow fibers or membranes. Several types of bioreactors, such as hollow fiber cartridges [1-13,19], and parallel plate dialyzers [20,21], have been studied to date [22]. Of these, hollow fiber bioreactors have received the most attention. Generally, hollow-fiver cartridges are used as hemodialyzers in clinical settings for treatment of kidney disease patients. During hemodialysis, blood flows in the lumen side (inside) of the hollow fibers, while dialysate flows into the extracapillary space (area outside the hollow fibers). In a BAL system, functional hepatocytes are embedded in this extracapillary space.

An example of a BAL device of the hollow-fiber type is illustrated in figure 1. Metabolites including various kinds of proteins are supplied from the hepatocytes, while toxic substances are removed from the patient’s blood. Ureogenesis and gluconeogenesis is also performed in the BAL device. Such mass exchange is done through micropores of the hollow fiber membranes (Figures 2A and 2B). The hollow fibers also act as a scaffold for embedded hepatocytes to attach to, and grow. In our experiment, clusters of iPS cell-derived hepatocytes attached to the exterior surface of hollow fibers (Figure 2C). These cells survived at least 7 days after injection into the cartridge and showed hepatocyte-specific metabolic activity, such as albumin production and urea synthesis [19]. 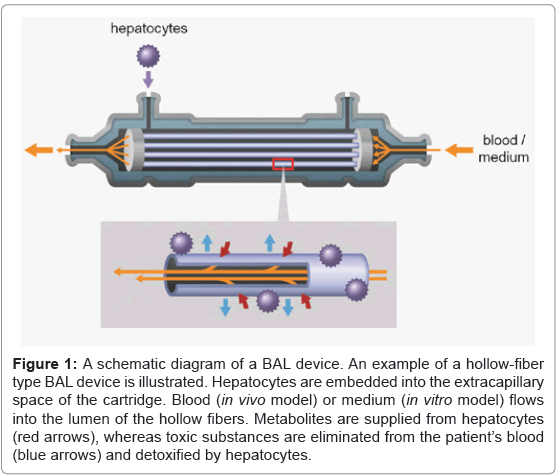 Figure 1: A schematic diagram of a BAL device. An example of a hollow-fiber type BAL device is illustrated. Hepatocytes are embedded into the extracapillary space of the cartridge. Blood (in vivo model) or medium (in vitro model) flows into the lumen of the hollow fibers. Metabolites are supplied from hepatocytes (red arrows), whereas toxic substances are eliminated from the patient’s blood (blue arrows) and detoxified by hepatocytes.

Figure 2: Scanning electron microscopy images. Hollow fibers have numerous micropores that enable mass transfer between the lumen and the extracapillary space (A,B). Hollow fibers play a role as a scaffold for embedded hepatocytes as well. A cluster of iPS cell-derived hepatocytes attaching to the exterior surface of hollow fibers is shown (C).

One of the most significant advantages of iPS cells over other cell sources is the unlimited supply of functional hepatocytes. It is well known that isolated hepatocytes do not proliferate in vitro. Furthermore, hepatocytes gradually lose their metabolic function with time in vitro, even with sophisticated tissue culture media [6,23]. Consequently, the limited supply of primary hepatocytes remains a major hindrance to successful use of BAL. In contrast, iPS cells, as well as embryonic stem (ES) cells, have the ability of infinite proliferation and self-renewal. Expansion and differentiation of iPS cells enables a continuous supply of large quantities of functional hepatocytes.

Tolerance to the host immune system is another advantage of iPS cells. Theoretically, patient-specific iPS cells and their derivatives are free from immunological rejection, because these cells originate from the patient’s own somatic cells. Immunological tolerance is a unique aspect of iPS cells, not shared by any other types of cells. As described above, primary human hepatocytes, human hepatoblastoma cell line and cryopreserved porcine hepatocytes, have been explored for BAL use [1-13]. In these models, death of allogenic hepatocytes or xenogenic hepatocytes has arisen from immune-mediated cytotoxicity. For example, Nyberg et al. [24] reported the loss of viability of porcine hepatocytes after perfusion of the BAL cartridge with canine blood. Immunostaining revealed the deposition of canine IgG, canine IgM, and canine complement on the dead porcine hepatocytes. Similar results have been reported by other researchers [25,26], suggesting the likelihood of humoral immunity-mediated damage, involving immunoglobulins and complements of the host.

Though a semi-permeable membrane acts as a barrier that protects embedded hepatocytes from patient’s immune system, complete protection-especially from immune functions-is unlikely to be achieved in a practical BAL system. Selectivity of mass transfer is mostly influenced by the pore size of the BAL membrane [24,27]. A membrane with a smaller pore size than the molecular weight of immunoglobulins and complements, e.g. IgG (147 kDa), IgM (900 kDa) IgE (190 kDa), C3 (190 kDa), and C4 (198 kDa) would completely shut out permeation of circulating immune mediators. However, a membrane with such small pores results in lower mass transfer efficiency and inferior metabolic performance of BAL. For example, Nedredal et al. [28] compared the mass transfer rates of membranes with 70-kDa pores, 150-kDa pores, and 400-kDa pores. They noted that mass transfer of the test substances, such as ammonia, total bilirubin, direct bilirubim, and albumin, was slowest and of smallest magnitude using the 70-kilodalton membrane, followed in turn by the 150- and 400-kDa membranes. Membrane fouling is another issue that affects the mass transfer rate of the BAL cartridge. Circulation of the patient’s blood into the hollow fibers causes deposition of solute and particles into membrane pores, resulting in degradation of the membrane’s performance. Nedredal et al. [28] reported that permeability of 70-kDa membrane was decreased by 62% after 2 hour exposure to pig plasma, whereas those of 150-kDa membrane and 400-kDa membrane were 24% and 7%, respectively. Consequently, larger pore size is desirable to realize a BAL system with superior metabolic activity. Obviously, greater permeability for metabolic function and less permeability for immune mediators are contradictory objectives. In this context, iPS cell-derived hepatocytes are a desirable cell source, because there is no need to worry about the permeation of immune mediators causing malfunction of embedded hepatocytes.

Although clinical application of iPS cell-oriented BAL system seems ever more likely in the future, there are several roadblocks to be overcome. First, protocols for hepatocyte differentiation of iPS cells must be improved. Among various differentiation protocols reported to date, typical protocols to obtain hepatocytes are three- to four-step approaches, in which iPS cells are differentiated via the definitive endoderm by sequential supplementation of growth factors, and/or chemicals [17-19]. Albumin-producing cells can be observed at the final stage of the differentiation program, but the metabolic activity of these cells is still much smaller compared with that of primary isolated hepatocytes. Further maturation of iPS cell-derived hepatocytes is required for widespread use in clinical purposes. One of the possible strategies for achieving this is forced expression of endoderm- or hepatocyte-specific genes by viral transduction. It has been reported that transient overexpression of the hepatocyte homeobox gene HEX, HNF4alpha, or combination of FOXA2 and HNF1alpha, leads to superior hepatocyte differentiation [29-33]. A low-oxygen condition during definitive endoderm formation and hepatic specification improves the efficiency of hepatocyte differentiation as well [17]. Other approaches include co-culturing iPS cells with a combination of liverpopulating cells, such as liver stellate cells, liver sinusoidal endothelial cells, and cholangiocytes [34].

Generally teratoma formation is a risk to the host’s body when transplanting iPS cells or their derivatives. Due to the pluripotency and the nature of unlimited proliferation, undifferentiated iPS cells form teratomas with all three embryonic germ layer cells, when xenografted into immunodeficient mice. Residual undifferentiated cells are commonly observed even after finishing differentiation programs, since complete differentiation of all the cells is hard to achieve at the present time [18]. However, this risk is negligible for BAL application of iPS cells, because BAL is an extracorporeal device.

Second, the time required to generate iPS cells and acquire hepatocytes is a problem for an iPS-oriented BAL system. It takes approximately three to four weeks to generate iPS cells from a patient’s skin fibroblasts, or from blood cells. Additionally, differentiation from iPS cells to hepatocytes requires two to three weeks. Though a stock of iPS cells would reduce the time required to provide such cells, the process to create enough functional hepatocytes for BAL use is still time-consuming, which means they would be unavailable for emergency use for fulminant diseases or accidents. Therefore, good indications for iPS cell-oriented BAL system are chronic liver diseases, e.g. hepatitis, cirrhosis, drug-induced liver dysfunction, alcoholic liver disease, non-alcoholic fatty liver disease, hemochromatosis, Wilson’s disease, autoimmune hepatitis, primary biliary cirrhosis and primary sclerosing cholangitis.

The high cost is another concern for iPS cell technology, because expanding and differentiating iPS cells requires expensive reagents. We believe a uniform protocol for iPS generation and hepatocyte differentiation will be established in the near future, which would realize widespread clinical use and cost reduction of iPS cell-oriented cell therapy.

iPS cells hold great promise in the BAL application due to their many advantages over other cell sources, namely, unlimited supply of cells and tolerance to the host immune system. Although further investigation and improvement of both the device and the differentiation program are required, we can conclude that iPS cell-derived hepatocytes should be vigorously pursued as arguably the best candidate for BAL systems.

We are grateful to Dr. Masumi Furutani and Dr. Haruo Urata at Central Research Laboratory of Okayama University Medical School, for their technical assistance in transmission electron microscopy analysis.

This work was partially supported by a Grant-in-Aid for Scientific Research (C) from the Japan Society for the Promotion of Science (No. 23590977).