Proteases As Selective Activators Of Triggered Drug Release: A Potential Answer To The Problem Of Biomaterial-Associated Infections?

Copyright: © 2012 Gilmore BF, et al. This is an open-access article distributed under the terms of the Creative Commons Attribution License, which permits unrestricted use, distribution, and reproduction in any medium, provided the original author and source are credited.

It is estimated that at any given time, some 9% of patients in the United Kingdom have a hospital acquired (nosocomial) infection, usually bacterial in nature, which may add to the patients discomfort, increase patient morbidity and mortality and result in increased length and cost of hospital stay. A UK Department of Health commissioned study estimated that nosocomial infections may be costing the National Health Service as much as £1 billion a year, with the National Audit Office estimating potential gross savings of £150 million per year provided effective preventative strategies are employed. The problem of medical device-related infection is one common to all types of implanted, in-dwelling medical devices. Critically, at least half of all cases of nosocomial infections associated with implanted medical devices. A general characteristic of biofilm communities is that they tend to exhibit significant recalcitrance to antibiotics and antimicrobial challenge compared with planktonic bacteria of the same species. The inaccessibility to antibiotics of the device-associated biofilm and the resistance of biofilm communities to antibiotics constitute the fundamental challenges in the prevention/eradication of device-associated bacterial biofilm. A number of past approaches such as immersion, coating and matrix loading to yield antimicrobialimpregnated devices have achieved some level of short-term success. However, major drawbacks have arisen, primarily as a result of less than optimal drug release profiles and especially due to the release of ‘sub-inhibitory’ concentrations of antimicrobials into the immediate milieu, believed to contribute to emergence of resistant organisms. Furthermore, drug release (hence clinical success) of these devices was facilitated by either the flow of biological fluids across the surface of the device or immersion of the device in relatively large volumes of biological fluids. Therefore such approaches are often limited by the amount of antimicrobial agent which can be incorporated into the polymer matrix and by the time over which therapeutically active concentrations of the active agent are released and maintained, limiting the lifetime of therapeutic activity of the device. Regardless of the class antimicrobial agent, approaches which balance activity with appropriate release to retard the emergence of resistance are urgently required to adequately control device-related biofilm infections. Clearly, there is enormous scope to minimise the risk of development of device-related nosocomial infections and to improve the clinical outcomes of patients hosting implanted medical devices. A logical direction for attention in this regard must be the modification of the polymer surface/coating of the medical device, either as a general approach or one tailored specifically to the site of intended use and likely challenge pathogen(s).

Proteases, also termed proteinases or peptidases, describe a large and diverse group of proteins that cleave, or cut, or degrade other proteins by hydrolyzing protein amide bonds (peptide bond hydrolases). Five major families of proteases have been defined; the serine proteases, cysteine proteases, aspartate proteases, metallo proteases and threonine protease. A sixth protease family termed the glutamic peptidases was not described until 2004. Under normal conditions, the physiological roles of proteolytic enzymes are exquisitely controlled and are central to a staggeringly diverse array of cellular and physiological functions. However, a number of diseases (including cancer, arthritis, diabetes and infections) are characterised by aberrant or uncontrolled proteolysis which often gives rise to the manifestation of the disease. Upregulation of protease activity has been linked to a wide variety of diseases including inflammation, microbial infection, tumour invasion and angiogenesis. The multifarious roles of proteases in diseases such as cancer, diabetes, neurological disorders, rheumatoid arthritis, cardiovascular conditions and Alzheimer’s disease make them major and exciting therapeutic targets. The potential of proteases as therapeutic targets, disease markers, prodrug activators, and as targets for potent and selective inhibitors for the modulation of the disease process is immense. Thus, disease-associated proteases make attractive targets for drug delivery system. Recent work in our group has sought to harness pathogen associated proteases to coordinate drug release with the presence of infectious microorganisms.

The term “prodrug” was first introduced in 1958 to describe any compound that undergoes biotransformation prior to elaboration of their pharmacological effects [1]. Classically, release of the active drug from the prodrug can be controlled via a chemical or enzymatic biotransformation. The rationale behind prodrug design is to overcome various limitations of parent drug, such as poor chemical stability, low bioavailability, poor aqueous solubility and toxicity. Prodrug design can also be used to improve targeting of drug action. Ideally, a prodrug is inactive in its native form, but can be converted to its active form when triggered.

In a recent study, Huang et al. [7] utilized the highly selective expression and the specific proteolytic activity of fibroblast activation protein-α (FAP-α) to construct a tumor targeting of FAP-α-based doxorubicin prodrug (Z-Gly-Pro-doxorubicin). It was found that FAP-α selective expressed on the surface of tumour-associated fibroblasts while not detected in normal adult tissues except tissues of healing wound [8]. FAP-α is a type-II transmembrance serine protease and has been reported to specifically show endopeptidase activity against N-blocked peptide base substrates, such as Z-Gly-Pro- AMC [9,10]. Based on this knowledge, Z-Gly-Pro-doxorubicin was developed for targeting delivery of doxorubicin. The studies revealed that doxorubicin was released from Z-Gly-Pro-doxorubicin when incubated with either FAP-α or tumour homogenate of FAP-α positive tumour (4T1 tumour), while showed highly stability in mouse plasma and various tissue homogenates.

Matrix metalloprotease (MMP-2 and MMP-9) was also reported to be exploited in the activation of acetyl L-prolyl-L-leucyl-glycyl-Lleucyl- doxorubicin prodrug [6]. P3-P1’ sequence acetyl L-prolyl-Lleucyl- glycyl-L-leucine is a recognized MMP substrate and cleavage occurred at Gly-Leu bond to generate leucyl-doxorubicin. In addition to the protease mentioned in this review so far, other proteases such as plasmin, carboxypeptidase, enkephalinase, prostate-specific antigen, thrombin, urokinase have been widely used in protease-responsive prodrug design [11,12].

According to the above reports, several prerequisities are essential for the development of protease-activated prodrug. (i) thorough understanding of the role of protease in disease development; (ii) over expression of protease in disease-associated environment, while low or no hydrolytic activity in non-diseased environment; (iii) identification of peptide sequence with high affinity of targeted protease for selective and rapid activation of the prodrug. Longer specific peptide motifs are better than single amino acid to achieve better protease selectivity. Schematic representation of protease-activated prodrug is shown in Figure 1.

Figure 1: Schematic representation of protease-activated prodrug. The prodrug is composed of an N terminal blocked protease cleavable peptide sequence and a potent therapeutic compound (drug). Upon addition of the targeted protease, the enzyme cleaves the prodrug at the peptide cleavage site, leading to the release of peptide fragments and therapeutic agents.

As mentioned above, prodrugs have been developed to enhance the stability, solubility or to improve targeting delivery of the therapeutic agent. Polymeric prodrugs provide additional opportunities for extended and targeted drug delivery. Conjugation of a therapeutic agent with a polymer leads to a polymeric prodrug. Drug release from polymer can be achieved by several different stimuli such as light, pH, temperature, electric/magnetic/sonic field and enzymatic action [13]. Of these, the protease-based stimuli strategies are particular interesting. Typically, protease-sensitive polymers are composed of a proteasesensitive substrate and another component that directs or controls interactions that lead to macroscopic transitions [14]. The release of therapeutic agent from the polymer is triggered by over-expressed disease-associated proteases (Figure 2). 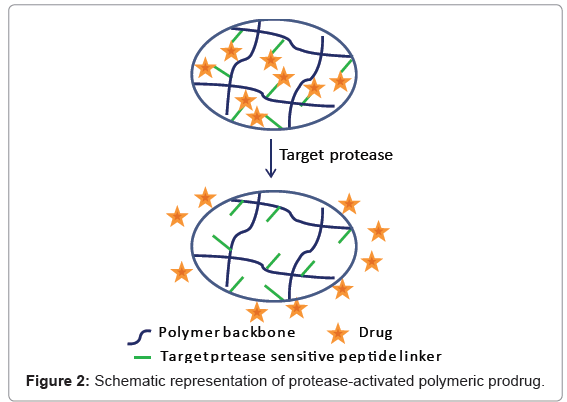 The protease-based stimuli strategies have been extensively developed for controlled drug release and drug delivery. For example, various conjugates of 5-fluorouracil (5-FU) and dextran, poly (ethylene glycol) (PEG) or poly [N5-(2-hydroxyethyl)-L-glutamine] (PHEG) were developed and their ability to liberate 5-FU in the presence of tumor-associated enzymes including collagenase type IV, cathepsin B and cathepsin D were investigated [15]. 5-FU was attached to the polymer at the C-terminal glycine residue of peptide spacers. The conjugate were reported to be able to effect a site-specific release of 5-FU in the presence of collagenase and cathepsin B and the conjugates P-Gly-Phe-Gly-Gly(FU)OEt (P = dextran/PEG/PHEG) were found to be the best substrates for cathepsin B.

In another study, Tanihara et al. [16] developed an antimicrobial release system triggered by thrombin activity. In this system, an insoluble polymer-drug conjugate was constructed by conjugating gentamicin to poly(vinyl alcohol) hydrogel via a thrombin-sensitive peptide linker (Gly-(D)-Phe-Pro-Arg-Gly-Phe-Pro-Ala-Gly-Gly). The conjugate selectively released gentamicin when incubated with thrombin-expressed Staphylococcus aureus infected wound fluid, whereas no biologically active gentamicin detected when incubated with non-infected wound fluid. Tauro and Gemeinhart [17] developed a MMPs-specific hydrogel-based delivery system for selective and local delivery of cisplatin. Cisplatin complexed to an MMP substrate (Cys-Gly-Leu-Asp-Asp) was incorporated into poly (ethylene glycol) diacrylate (PEGDA) hydrogel. Cisplatin release was controlled based on the activity of MMPs expressed in U-87 MG cell (a malignant glioma cell line) culture.

In summary, a wide range of proteases have been validated as specific triggers for controlling drug release. Numerous prodrugs and polymeric prodrug conjugates have been developed based on the selective activity of disease-associated proteases to achieve controlled drug release and targeted drug delivery. Smart protease-triggered drug release systems may provide a potential answer to numerous diseases characterised by aberrant proteolysis and, importantly, chronic biofilm and device associated infections where drug release is coordinated with the presence of protease-expressing pathogens.