Copyright: © 2012 El-Khawaga OY. This is an open-access article distributed under the terms of the Creative Commons Attribution License, which permits unrestricted use, distribution, and reproduction in any medium, provided the original author and source are credited.

Methomyl carbamate is a pesticide widely used in the control of insects. The present work aims at studying the effect of tannic acid on the antioxidant system of methomyl-treated-mice. Swiss albino mice were intraperitoneally administered a single dose of methomyl (7 mg/Kg b.wt). Mice of another group were injected with tannic acid (20 mg/ Kg b.wt.) 3 hrs before methomyl intoxication. After 24 hours, methomyl exposure resulted in significant increase in lactic dehydrogenase activity (LDH). The antioxidant capacity of hepatic cells in terms of the activities of superoxide dismutase (SOD), catalase (CAT), glutathione reductase (GR), glutathione-S-transferase (GST) and glutathione (GSH) content was diminished. It appears that methomyl exerts its toxic effect via peroxidative damage to hepatic, renal and splenic cell membranes. Also, methomyl induced DNA damage in these organs as detected by alkaline filter elution technique. The distribution of methomyl in different organs of mice was detected by HPLC. Tannic acid administration prior to methomyl injection produced pronounced protective action against methomyl effects. It is observed that tannic acid enhances the endogenous antioxidant capacity of the cells by increasing the activities of SOD, CAT, GR and GST as well as increasing GSH content. The activity of LDH was decreased in liver and the damage of DNA was suppressed comparable to controls. In conclusion, this study concludes that tannic acid has a potential in mitigating most of the adverse effects induced by methomyl toxicity.

In the recent years, the use of pesticides in agriculture has been increasing. The wide spread use of pesticides carries more exposure of agricultural and industrial workers as well as more contamination of food with pesticides [1,2]. Pesticides with such properties have been shown to cause over-production of reactive oxygen species (ROS) in both intra and extracellular spaces, resulting in disturbance of the prooxidant/ antioxidant balance of the cells thereby inducing oxidative stress [3,4]. When formation of reactive oxygen species (ROS) outstrips the scavenging capacity of these antioxidant defenses, harmful free radicals accumulate and increase the likelihood of oxidative damage to critical biomolecules such as enzymes, proteins, DNA and membrane lipids [5]. One of the most common pesticides is methomyl carbamate which has been classified as a pesticide of category-1 toxicity [6]. Methomyl is a metabolite of thiodicarb and acetimidate that is suspected oncogen and is metabolite in animal tissues [7]. Human exposure occurs during occupational handling of the pesticide, spraying of flies and ingestion of food contaminated by methomyl [8]. The exposure to methomyl exerts toxic actions on the nervous system, liver, kidney, muscle and eye [9,10]. It has been suggested that hepatic oxidative status caused by methomyl involves bioactivation by the microsomal cytochrome P450 - dependent monooxygenase system, resulting in the formation of oxon, sulfoxide and sufone that initiate lipid peroxidation and protein oxidation [11,12]. Tannic acid is an antioxidant compound which comprises polyphenolic compounds that have been utilized to mitigate various conditions of oxidative stress [13,14]. Its antioxidant action is believed to originate from its ability to stimulate glutathione (GSH) synthesis, therefore, maintaining intracellular GSH levels and scavenging reactive oxygen species (ROS) [15]. Since there are no published studies on the protection of tannic acid against methomyl toxicity, the present study was undertaken to elucidate the possible protective effect of tannic acid on methomyl-induced changes in mice.

All chemicals used in this study were of analytical grade and were purchased from Sigma Chemical Co. (St. Louis, MO, USA).

The experiments were carried out on adult female Swiss albino mice, weighing about 25 g. Animals were kept under good ventilation and received a balanced diet and water ad libitum.

They were caged in an environment at 22-24°C with a light/dark cycle. The animals were divided into four groups of six animals each. The first group was the control group without any treatment. The second group received a single dose of 7 mg methomyl/ Kg body weight) intaperitoneally (i.p.). The third group received a single dose of 20 mg tannic acid/Kg body weight intramuscularly (i.m.). The fourth group received tannic acid i.m. 3 hrs before methomyl administration at identical doses to groups 2 and 3. After 24 hours of methomyl treatment, the animals were sacrificed by decapitation. Blood samples were collected and allowed to clot for 10 to 15 min, centrifuged and the serum was then separated and stored at E -20°C. The livers, kidney, spleen, stomach, intestine and lungs were immediately dissected out, washed in ice-cold saline, blotted dry and weight for measuring various biochemical parameters.

An accurately weight piece of liver tissue homogenized in ice-cold 0.9% saline using a Teflon pestle connected to a homogenizer motor. The liver homogenate was diluted to yield 5% (w/v) liver homogenate. The homogenate was centrifuged at 5000 rpm for 30 minutes at 4°C to remove cell debris and nuclei. The resulting supernatant was used for biochemical analysis.

The residues of methomyl in lung, stomach, liver, spleen, kidney and intestine were measured by high performance liquid chromatography (HPLC) [24]. Instrument type 1100 computerized was utilized for the determination of the target pesticides equipped with an autosampler (HEWLETT PACKARD hp USA). A 100 μl volume was injected onto a Zorbax NH2 4.6 μm X 25 cm P.N.880952.708 column (hp USA). The column temperature was 17°C and the detector used was U.V. detector at 250 nm. Elution was performed at flow rate of 1.7 ml/min with a mobile phase methanol and water as elutent.

The results are expressed as mean ± SD. Statistical analysis was performed according to the method of Murray [25]. Data were analyzed using unpaired Student’s t-test. P values of <0.05 were considered to be statistically significant.

No significant changes were observed in the levels of the studied enzymes after tannic acid treatment (Table 1). However, liver GSH content and GR, GST, SOD and CAT activities were all significantly decreased in methomyl-treated mice compared to the corresponding values in control groups. On the contrary, hepatic LDH activity is significantly increased after methomyl. Tannic acid seems to be a good agent preventing the adverse effects of methomyl. This is evident by the elevation in liver GSH content and GR, GST, SOD and CAT activities after tannic acid treatment and lowering LDH activity (Table 1). The statistical analyses of hepatic enzymes of tannic acid- pretreated methomyl-treated mice were carried out compared to the corresponding values after methomyl–treatment. The DNA damage was detected in liver, spleen and kidney after 24 hours from methomyl administration. The elution rate constant (K) was significantly decreased in methomyltreated group compared to the control group. However, the damage of DNA in the tested organs was prevented by treatment with tannic acid (Figure 1). The estimation of liver, spleen, kidney, stomach, intestine and lung methomyl concentration in methomyl- intraperitoneally injected mice (7 mg methomyl/Kg body weight) indicated the presence of the toxicant in these organs as shown in Table 2. In methomyl-treated mice, the toxicant was extensively stored in the lung. Moreover, the concentration of methomyl in tannic acid pretreated group was highly significantly decreased in lung but no significant changes in liver, kidney and intestine compared to methomyl–treated mice. On the other hand, the level of this pesticide in spleen, stomach was significantly increased in the protected group compared to methomyl treated group. 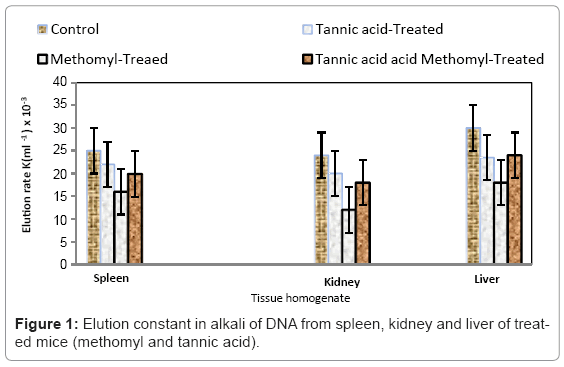 Figure 1: Elution constant in alkali of DNA from spleen, kidney and liver of treated mice (methomyl and tannic acid).

Table 2: Distribution of methomyl in different organs (μg/g tissue) of the mice injected with the pesticide in a dose of 7 mg/ Kg body weight.

Methomyl exposure promotes the oxidative damage of liver cells by enhancing peroxidation of membrane lipids [26]. This oxidative damage might ultimately enhance apoptosis unless the deleterious effects of the oxidative stress in counteracted by the endogenous cellular defense mechanisms that include enzymatic and non enzymatic free radicals scavengers [27]. In the present study, the increased oxidative stress and cellular damage caused by methomyl-treatment was evident by enhanced LDH activity in liver accompanied by decreased content of GSH as well as suppression of the activities of antioxidant enzymes in liver of methomyl-treated mice [28]. The elevation of LDH activity is probably a result of its leakage from tissues due to loss of membrane permeability [9]. According to the present data, the activities of GST, GR, SOD and CAT in liver mice were significantly decreased. The inhibition of these enzyme activities probably leads to the intracellular accumulation of ROS with subsequent development of tissue injury. These results are in agreement with those [26,29] which find that SOD contributes to protection against oxidative damage by catalyzing the dismutation of O2- [10]. Additionally, a decrease in GSH content and its regenerating enzyme GR in the liver may be due to its utilization to challenge the prevailing oxidative stress under the influence of ROS [12,30]. Moreover, methomyl caused significant decrease in the elution rate constant in the liver, kidney and spleen of methomyl-intoxicated mice compared to control mice. This may be attributed to induction of apoptosis by increased methomyl dose which may cause more DNA damage [31]. The protective action of tannic acid against methomylinduced changes could be explained by two mechanisms: i) stimulation of free radical scavenger and ii) increased antioxidant capacity in cells. In the first mechanism, Table 1 showed that the activities of GR, GST, SOD and CAT were significantly higher in tannic acid protected mice than in methomyl-treated mice. This might be coupled with the ability to protect levels of antioxidants such as N-acetyl cysteine [32] and to stimulate several antioxidative enzymes or prevent damage from free radicals insult. In the second mechanism the increased activity of GR is required to maintain sufficient content of glutathione which exerts an antioxidant property and lowers free radical damaging effects. Therefore, tannic acid enhances the availability of glutathione which is one of the most intrinsic antioxidants that prevents cell damage. The protective effect of tannic acid in methomyl-treated mice appears to be through enhancement of elution rate constant for DNA of the liver, kidney and splenic cells. Methomyl-treated mice show enhanced cell damage accompanied by decrease in the antioxidant capacity of the cell. The study of pharmacokinetics may give variable results for different toxicants. The onset, duration and intensity of action of a pesticide after administration are controlled by the rate at which the toxicant reaches its site of action but the variations in the concentration of the toxicant in different organs cannot be explained yet. In conclusion, induction of hepatic oxidative stress by methomyl could be prevented by tannic acid administrate in the mice.