Copyright: © 2011 Felix S, et al. This is an open-access article distributed under the terms of the Creative Commons Attribution License, which permits unrestricted use, distribution, and reproduction in any medium, provided the original author and source are credited.

Fermentation of seaweed to produce larval feed was developed using an in situ fermentor. Marine single cell detritus (MSCD), a seaweed based fermented product is an ideal material for feeding shrimp larvae. This paper deals with the development of protocol for the preparation of MSCD using the fermentor. Ulva reticulata, a green seaweed, was chosen as the base material and the enzyme Cellulase was used for the degradation of seaweeds into single cell units. Fermentation of Ulva sp was carried out by a consortium comprising a lactic acid bacterium Lactobacillus plantarum (LAB) and the yeast of food grade Saccharomyces cerevisiae (grape source). Potato powder a sugar substrate and soya powder a nitrogen substrate were also added. The process of fermentation was monitored continuously by estimating the lactic acid concentration, pH and also by the odour. The microbial propagation pattern for a period of 50 days has also been observed to understand the product's keeping quality.

Species of the marine algal genus Ulva are known for their various uses like feed, manure, folk medicines, dietary fiber contents as well as for the rheological and gelling properties of their sulfated polysaccharides. Uchida et al. [1] developed the protocol to perform the lactic acid fermentation of seaweed. Single cell detritus (SCD) is a product prepared by decomposing seaweed to a cellular level, and is expected to be utilized as a fish-diet in place of unicellular algae. The present Paper give details about the culture conditions standardized for the effective preparation of SCD from Ulva reticulata based on a lactic acid fermentative method.

Enzymatic hydrolysis of the seaweed cell wall is a procedure used in many applications. It has been described for improving protein digestibility by removing anti-nutritional factors such as polysaccharides. Uchida and Murata [2] reported a successful preparation of SCD by enzymatic and microbial fermentation. Uchida et al. [3] combined the activity of both lactic acid bacteria (LAB) and yeast for the preparation of the marine silage or MSCD.

Uchida and Numaguchi [4] used the decomposing properties of the marine bacteria Alteromonas espejiana to obtain SCD from Ulva pertusa and showed that these particals are easily ingested by larvae of the clam Ruditapes philippinarum. Uchida et al. [5] prepared a seaweed based SCD successfully in large scale to feed young pearl oysters. MSCD was prepared in this study to test its efficiency in shrimp larvae.

Collection and preparation of seaweed powder

Seaweed Ulva reticulata (Chlorophyceae) was selected based on their frond type, proximate composition and its abundant availability and collected from the coastal waters of Gulf of Mannar, Thoothukudi. Collected seaweeds were washed thoroughly, shade dried and oven dried at 60°C for 4 hrs. Dried seaweed was ground to make a powder.

The cell walls of seaweeds are made up of cellulose which needs to be digested to convert them into individual cell components. The cellulase enzyme Deniwash 1000 L (Enzyme India Ltd) serves the above purpose. Deniwash 1000 L is an acid cellulase liquid preparation from Trichoderma viride. This enzyme has the activation temperature of 50°C to 55°C. Seawater was filtered through the canister and UV filters and the salinity was tested prior to use and during the process. The hemocytometer (Neubauer counting chamber) is used for the determination of enzyme digested particle numbers of seaweeds. A thermostatic controlled incubator shaker was used to maintain the activation temperature of respective enzymes. For in situ, fermentor of 10 litre capacity and an autoclavable 3 litre capacity were used to mass produce MSCD.

Standardization of enzyme digestion: To standardize the enzyme type, concentration and time duration, three types of cellulase (Enzymes India Pvt. Ltd) viz. Deniwash VT and Tropizyme-p, Deniwash-1000L were added to the base material at different concentrations viz., 50, 100, 250, 500, 750 and 1000µl. The initial mean number of particles was estimated to be 2.84 x 107 particles / ml and the increase in the number of particles was estimated periodically i.e. after 20, 45, 60 and 120 minutes of enzyme inoculation.

Standardization of microbial combination: To standardize the microbial combination Lactobacillus plantarum (MTCC 1325) and Saccharomyces ceriviceae (MTCC No.4780) were added in different concentrations to the 100 ml base material treated with enzyme Deniwash-1000L. The samples were drawn on the 4th, 6th and 8th day and the parameters viz. odour, pH and lactic acid concentration [6] were estimated/observed.

Standardization of substrates: To standardize the sugar substrate concentration, potato powder at various concentrations viz. 1, 2.5, 5, 7.5 and 10% were added to 100 ml of the base material treated both enzymatically and microbially. The samples were drawn from the container periodically i.e., 2nd, 3rd, 4th, 5th and 6th day and the parameters viz. odour, pH and lactic acid concentration were estimated / observed.

To standardize the protein substrate concentration, soya powder at various concentrations i.e., 1, 2.5, 5, 7.5 and 10 % were added to 100ml of the base material treated both enzymatically and microbially. The samples were drawn from the container periodically i.e., 2nd, 3rd, 4th, 5th and 6th day and the parameters viz. odour, pH and lactic acid concentration were estimated / observed.

Fermentation process: The 9:1 concentration of base material (seawater and seaweed) was transferred to the fermentor sterilized at 121°C for 20 min after that the temperature was maintained at 55°C and Deniwash 1000 L enzyme was injected through the inoculation port at the rate of 7.5 ml per 100 ml of base material. The stirrer was set at 200 rpm .The whole process was carried out for 1 hr. The pH before and after enzyme treatment were 5.75 and 5.86 respectively.

L. plantarum strain (MTCC 1325) raised in MRS broth (Hi media) and S. cerevisiae (MTCC No.4780) raised in YM broth (Hi media) for 24 hrs each were injected through the inoculation port. Prior to microbial inoculation the temperature was dropped down to 35°C. L. plantarum and S. cerevisiae were inoculated each at a final concentration of 107 cfu/ml of base material. The substrates potato powder and soya powder were added at the rate of 1% w/v respectively of base material. The level of lactic acid production, pH and odour were periodically estimated/observed. Fermentation was carried out till the pH reduced below 4.00. The particle size of the single cell unit was measured as 2.5-7.5 µm. MSCD product was aseptically transferred to a jar and closed air tight and stored at room temperature with proper labeling.

Deniwash 1000 L enzyme at a concentration of 7.50 ml per 100 ml of base material for duration of 60 min that showed the highest particle numbers (Figure 1) was chosen for the enzymatic digestion. The treatments with the L. plantarum strain (MTCC 1325) and S. cerevisiae (MTCC No.4780) at a final concentration of 105 cfu/ml was effective in lactic acid production (Table 1). The substrate (sugar and protein) concentration at the minimum i.e., 1% was found effective for MSCD preparation. The progress of fermentation in the fermentor vessel was monitored by observing the lactic acid production and the reduction in pH level (Figure 2 and Figure 3). The microbial propagation study undertaken in an interval of 24 hours revealed that an increment of L. plantarum from 1.23 x 105 cfu/ml to 3.00 x 108 cfu/ml . Similarly S. cerevisiae recorded an increment from 4.30 x 105 to 5.00 x 108 in duration of 72 hrs. The viability of the microbes i.e., L. plantarum and S. cerevisiae in MSCD was studied periodically for duration of 50 days. Initially L. plantarum was at 3.00 x 108 cfu/ml which reduced to 1.86 x 106 cfu/ml and S. cerevisiae was at 5.00 x 108 cfu/ml that reduced to 8.00 x 106 cfu/ml at the end of 50 days. 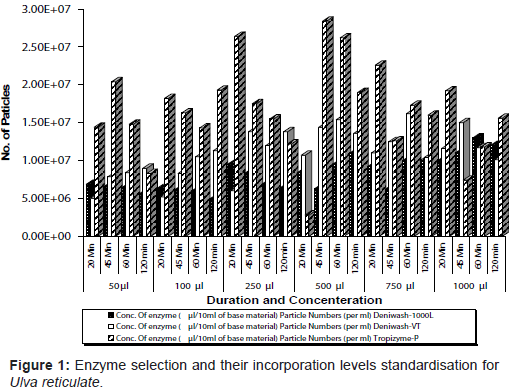 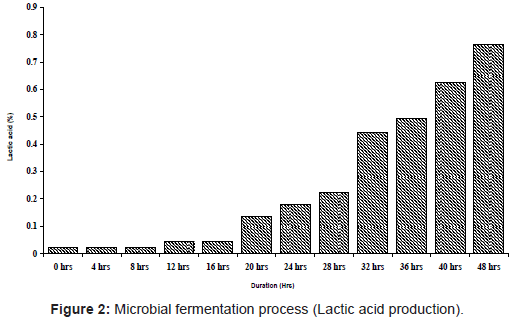 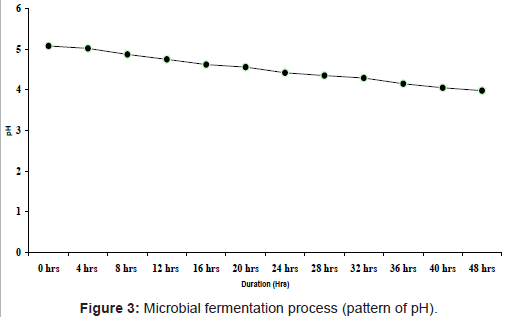 In this study, Ulva reticulata with frond type, flat, foliaceous and thallus with two cell thicknesses [7] and with crude protein level of 19.5% was selected. Further, Ulva sp. also produce high amount of lactic acid during fermentation (0.76g/100ml of fermentation products), which help in the long term preservation of the MSCD [8]. Cellulase enzymes are advantageous because of their better agar recovery rate and their potential application in the degradation of cellulosic wastes into glucose which could be utilized as the carbon source for the microbial proteins.

Based on this concept, cellulase enzyme was assigned for the studies on seaweed. Deniwash 1000 L was found to produce large number of particles i.e. 2.84 x 107 particles / ml in 60 minutes at a concentration of 750 µl/10ml of base material at 55°C. Stability and high cell concentration of the MSCD are the advantages of the present method compared to microalgae culture [8]. A microbial mixture of one type of 'LAB', Lactobacillus brevis and two types of yeast, Debaryomyces hansenii and Candida sp. were used to prepare the marine silage of Undaria pinnatifida [5]. It showed that yeast and 'LAB' can coexist in a same medium. Lactobacillus plantarum produce lactic acid with high efficiency and retard the growth of contaminating bacteria [8]. Yeast, S. cerevisiae was selected, as it helps in fermentation apart from its unique bioremediatory effect in aquaculture system [9]. Uchida et al. [3] recorded that L. plantarum in combination with S. cerevisiae produced lactic acid at a rate of 1.64 g/l and pH also was observed to be reducing to 3.7 [10]. In the present study, the concentration of 'LAB' and yeast to be inoculated was standardized as 107 cfu/ml each. To promote the lactic acid fermentation a sugar substrate, namely potato powder and protein substrate soya powder, was added to the base material at a concentration of 1% w/v of base material. The ester odour in the MSCD was presumably contributed by S. cerevisiae in the culture medium [2].

The duration of MSCD preparation took a relatively less duration than that of Uchida et al. [5] who took 8 days for fermentation [11-13]. The difference in the duration could be due to the efficiency of the fermentor as well as the right combination of microbes incorporated in the present study. The microbial propagation during MSCD preparation in this study reached a maximum of 108 (both LAB and yeast) at the 60th hour of microbial inoculation. The yeast viability tested during a period of 50 days, at an interval of 15 days, showed that it was declining as the storage duration increases, which could be due to the lack of salt tolerance capability of S. cerevisiae as reported by Uchida et al. [3].

The project investigator acknowledges the grand provided by the Department of Biotechnology, Government of India, New Delhi for carrying out works on this area of research.