Copyright: © 2012 AliReza Y, et al. This is an open-access article distributed under the terms of the Creative Commons Attribution License, which permits unrestricted use, distribution, and reproduction in any medium, provided the original author and source are credited.

Background: Various mutations on endothelial nitric oxide synthase (eNOs) gene cause reduced production of NO, the endothelial relaxing factor, and may accelerate the process of atherosclerosis. The study designed to investigate the frequency of T-786C polymorphism of the gene in patients suffering from CAD in North West of Iran.

Material and methods: One hundred twenty subjects including 60 patients with angiographically diagnosed CAD and 60 age and sex matched CAD-free subjects as control were studied. The levels of Nitric oxide in the samples were measured with the Griess Method. The genotype studies were carried using allele specific PCR.

Results:Comparing with the control reduced levels of NO was noticed in the patient group (P<0.05) and significantly high frequency of eNOs -786C genotype was found in CAD patients (P<0.05).

Conclusions:The low levels of NO and increased frequency of T-786C polymorphism might be a risk factor in progression of coronary artery disease in the studied subjects.

Coronary artery disease (CAD) is the major cause of mortality and morbidity in most countries. Among many traditional risk factors for CAD development positive family history are now being considered as significant and novel risk factor. Atherosclerosis, an essential factor for the development of CAD, results from a defective endothelial function, which is ascribed mainly to an altered production of nitric oxide (NO), an important endothelium-derived relaxing factor [1]. NO is synthesized via a reaction that includes the conversion of L-arginine to L-citruline catalyzed by endothelial nitric oxide synthase (eNOS), which is one of the three isoforms of the enzyme [2]. eNOS is the product of eNOS gene, which is 21kb in size and consists of 26 exons [3]. Additionally, promoter region of the eNOS gene harbors several transcription factor binding sites, regulating gene expression [4].

Nitric oxide (NO) is a vasoactive substance and a major mediator of endothelium-dependent vasodilatation, which is synthesized and also released in the vascular endothelium [4]. Nitric oxide diffuses from the endothelium to the vascular smooth muscle cells, where it increases the concentration of cyclic guanosine monophosphate (cGMP) by stimulating soluble guanyl cyclase, leading to vascular relaxation [5].

Nitric oxide (NO) is a free radical molecule that plays an essential role in numerous physiological actions, including vaso regulation, inhibition of platelet aggregation, and immunological reactions [6]. Endothelial nitric oxide synthase (eNOS), an isoform of NO-producing enzymes that is fairly specific to endothelial cells, has been found to play a prominent role in both angiogenesis and vasculogenesis [7].

Recently, the eNOS gene was studied extensively for genetic polymorphisms to elucidate its genetic role in cardiovascular diseases. As a result, a single-nucleotide polymorphism (SNP) in the promoter region, T-786C, was found to modify the promoter activity in vitro [8].

The eNOS is encoded by a gene (NOS3) located on chromosome 7q35-q36 [9]. A polymorphism in the 5’ flanking region of the NOS3 gene (T-786C) has been associated with coronary spasm among Japanese [8,10]. It is believed that these mutations might result in altered NO metabolism and impaired NO release, leading to increased vascular tone and elevation in blood pressure. One of the mutations in the eNOS gene is a result of a thymidine (T) being replaced by a cytosine (C) at nucleotide -786 (T-786C).

The aim of present study was to determine the prevalence of T-786C polymorphism of eNOS in CAD patient and control. Because of significant effect of diabetes and smoking on the NO metabolism the samples obtained from non-diabetic and non-smoking subjects.

Blood samples were collected in the morning by venipuncture after an overnight fast and were allowed to clot at room temperature for about 1 hour. Sera were separated from cells by centrifugation at 1500xg for 10 min and kept at -80°C and blood samples were stored at -20°C until analysis.

Measurement of serum NO

The levels of NO in serum were determined colorimetrically by Griess method [11]. In this method, NO undergoes a series of reactions with several molecules present in biological fluids including O2-, O2 and NO2-. The final products of NO in vivo are nitrite (NO2- and nitrate (NO3- ). The relative proportion of NO2-and NO3- is variable and cannot be predicated with certainty. Thus the best index of total NO production is the sum of both NO2- and NO3-. The method used in this study provides an accurate and convenient measurement of nitrate/nitrite concentration in a simple two-step process. The first step is conversion of nitrate to nitrite utilizing nitrate reductase. The second step is the addition of Griess reagent which converts nitrite into deep purple azo compound. Colorimetric measurement of the absorbance due to this azo chromophore accurately determines nitrite concentration.

DNA was extracted using standard phenol-chloro for procedure. Genotyping of T-786C, a newly developed allele-specific polymerase chain reaction (PCR) was used (Figure 1) [12]. The oligonucleotide primers used in the reaction are listed in (Figure 1). Artificial mismatches were included in the 2684T and 2684C primers as indicated in (Figure 1). Amplification was performed in a total volume of 20 μL containing 100 ng genomic DNA, 5 μM 2684T and 2684C primers, 1.6 μM T0 and C0 primers and 10 μL Master Mix. After a hot start at 96°C, amplification was achieved by 36 cycles at 94°C for 40 seconds, 54°C for 40 seconds, and 72°C for 45 seconds. The C and T alleles gave a 176bp and a 250bp product, respectively, with a 387bp common product (Figure 2). 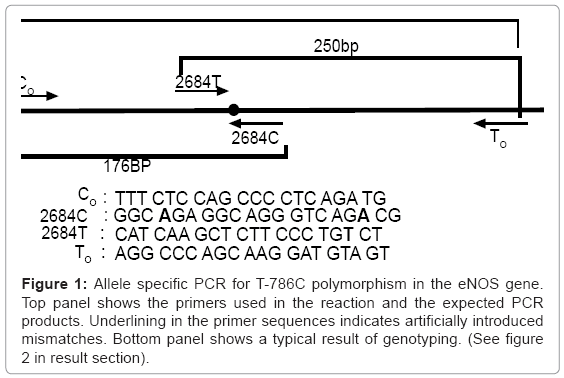 Data were analyzed with t-test, expressed as mean ± SD and χ2 cisqure. Data were compared in the groups by using SPSS software version 16. P<0.05 was chosen as the level of significance. Allele frequencies were calculated from the genotype counts. The observed genotype counts were compared with those expected under Hardywienberg equilibrium with χ2 test.

The characteristics of the case (CAD) as well as control group are summarized in (Table 1). NO differences were noticed between the mean values of age, sex and family history of CAD in patient and control groups. The percent of hypertensive subject in the patient groups was significantly higher than that of control group (p<0.05) (Table 1).

Table 1: The demographic and clinical data of the patient and control groups.

Comparing NO levels in the patient and control groups, significantly low levels of NO were noticed in the patients group (p<0.05) (Table 2).

Table 2: The levels of Nitric oxide (NO) in patient and control groups.

Nitric oxide (NO) plays an essential role in regulating vascular tone and hemodynamic. NO stimulates endothelial proliferation and angiogenesis, thereby playing an important role in wound healing and microcirculation. In addition to NO inhibits the release of endothelin-1 (a vasoconstrictor) [13]. Besides being an endothelium derived vasodilator molecule, NO also has important physiological and pathological effects. It can be synthesized in most tissue and cells. Its most prominent roles in cardiovascular system are blood pressure regulation, inhibition of thrombocyte aggregation, leukocyte adhesion, smooth muscle cell proliferation, and LDL oxidation. The decreases in production and bioavailability are associated with events that accelerate development of atherosclerosis such as vasoconstriction, thrombocyte aggregation, migration of monocytes to the vascular wall, oxidized LDL and foam cell production. The main hypothesis of our study was that increased oxidative stress could reduce NO synthesis. Although patients with CAD had increased MDA levels, no significant correlations were determined between MDA and NO. NO levels were tended to be higher than those of the control group [14].

Scribner et al. [15] reported that, NO levels are significantly lower when compared to those without hypertension. Again in the same study, NO levels of the coronary artery patients without hypertension were similar to those of the control group [15]. In this study, serum levels of NO in patient groups were meaningfully higher than those of control and our observations confirm data from previous studies.

Recently, several studies revealed that there are various mutations on eNOS gene and these mutations might be a risk factor for CAD. The polymorphisms differ largely among races. In this study, we investigated the relationship between T-786C mutation of eNOS gene and CAD specifically in the Iranian population. To our knowledge, this polymorphism has never been investigated in this population. The results demonstrated an association between C allele and CAD in the Iranian population. The polymorphism is a result of a thymidine being replaced by a cytosine at nucleotide -786 (T-786C).

Interaction between smoking eNOS genotype and CAD has been reported [16]. Smoking is known to induce oxidative stress, which is a potent suppressor of eNOS activity. Also others found an association between genetic variation in the eNOS gene and diabetes in CAD, therefore in this study all subjects selected were non-smoker and nondiabetic.

This polymorphism of eNOS gene was also investigated by several studies for the association with hypertension [16], the presence and severity of CAD [17], and MI [18]. Rossi et al. [17] reported that they found a significant association between the T-786C mutation and CAD. Colombo et al. [19] showed a positive association between the polymorphisms and the extent of CAD in the Italian population. T-786C polymorphism was also reported as being related to coronary spasm in the Japanese by Nakayama et al. [20]. In this study high frequency of C/C genotype of T-786C was noticed in the patient group. The frequency of C allele was significantly higher in patient group. The results are in agreement with those reported by others.

According to Nakayama et al. [8], the -786C allele would be associated with a significantly reduced eNOS promoter activity. The reduced endothelial production of NO in the coronary arteries would predispose carriers of the C allele to coronary spasm. The coronary spasm might be more severe and prolonged in CC homozygotes, increasing the risk of CAD [21]. Also according popov et al. [22], report the eNOS T-786C polymorphism could serve as a possibility to differentiate high risk subgroups in heterogeneous population individual with cardiac diseases who need cardiac surgery with CPB.

The T-786C mutation in the promoter region of eNOS resulted in the reduction of eNOS promoter transcription rate [8], leading to the reduced NO production in blood vessels and endothelial dysfunction [23].

It was concluded that presence of the eNOS mutant allele reduces endothelial production of NO and may predispose the patients carrying the mutant allele to coronary spasm, hypertension and coronary artery diseases.