Copyright: © 2011 Sollazzo V, et al. This is an open-access article distributed under the terms of the Creative Commons Attribution License, which permits unrestricted use, distribution, and reproduction in any medium, provided the original author and source are credited.

Pure titanium and titanium alloys are materials widely used in orthopedics and dental surgery because of their mechanical properties, chemical stability and biocompatibility. Although excellent clinical results have been shown, traditional porous metals have several inherent limitations (low volumetric porosity, relatively high modulus of elasticity and availability as a coating only). With the aim of going over these limits, improving the potentiality of osteointegration, a new highly porous titanium biomaterial (Trabecular Titaniumâ„¢, TT) has been developed. Because the molecular events due to TT and able to alter osteoblast activity to promote bone formation are poorly understood, expression of osteoblastic related genes in mesenchymal stem cells exposed to TT was investigated. The expression levels of bone related genes like RUNX2, SPP1, COL1A1, COL3A1, BGLAP, ALPL, and FOSL1) and mesenchymal stem cells marker (CD105) were analyzed, using real time Reverse Transcription-Polymerase Chain Reaction.TT causes induction of bone related genes osteopontin (SPP1), osteocalcin (BGLAP) alkaline phosphatase (ALPL) and indicating the differentiation effect of this biomaterial on mesenchymal stem cells.The obtained results can be relevant to better understand the molecular mechanism of bone regeneration and as a model for comparing other materials with similar clinical effects.

Several features of the implant surface such as composition, topography, roughness and energy level play a relevant role in implant osseointegration [1,2]. Little is known about the structural and chemical surface properties that may influence biological responses [3]. Pure titanium and titanium alloys are widely used in orthopedics and dental surgery because of their mechanical properties, such as chemical stability and biocompatibility [4,5]. In fact, titanium is used to manufacture joint prostheses for partial and total joint replacement. Moreover, titanium is also used to produce plates and screws for the osteosynthesis of fractures and for dental implants [6,7]. Surface roughness has been demonstrated to have positive effects on adsorption molecules, local factor production and proliferation and differentiation of cells [8-10]. Conventional orthopedic implants are composed of stainless steel, cobalt- chromium (CoCr) and titanium alloys [11]. Titanium is the most commonly used metal for uncemented implants because of its excellent biocompatibility, ready availability and high strength because of its low specific gravity [12]. Although good clinical results have been shown, traditional porous materials have several inherent limitations, such as low volumetric porosity, relatively high modulus of elasticity, low frictional characteristics. Moreover, it may be available as mere coating. In order to overcome these limits, and to improve the potentiality of osteointegration and, consequently, the stability of prosthetic implants, a multi-planar, exagonal, highly porous biomaterial (Trabecular Titanium ™) has been developed which imitates the cell structure of the cancellous bone (Lima Corporate, San Daniele del Friuli, Udine). The morphology and dimension of the open pores have been developed to induce osseointegration, its resistance is higher than the cancellous bone and the low rigidity has been studied to foster the transmission of physiological loads from implant to bone.

The first step in the osseointegration of a prosthetic implant is the osteoblastic differentiation of mesenchimal stem cells surrounding the implant [13,14]. Since few reports, to our knowledge, analyze the effects of Trabecular Titanium™ on stem cells [15] and none focuses on the genetic effects, the expression of genes related to the osteoblast differentiation was analyzed using cultures of bone marrow derived human mesenchymal stem cells (BM-hMSCs) treated with Trabecular Titanium ™ for seven days, in order to detect the early effects of the common part of BMPs on stem cells.

BM-hMSCs at fourth passage were grown in medium (Alphamem Sigma Aldrich, Inc., St Louis, Mo, USA) supplemented with 10% fetal calf serum, antibiotics (Penicillin 100 U/ml and Streptomycin 100 micrograms/ml - Sigma Aldrich, Inc., St Louis, Mo, USA) and amminoacids (L-Glutamine - Sigma Aldrich, Inc., St Louis, Mo, USA). The cultures were maintained in a 5% CO2 humidified atmosphere at 37°C. For the assay, cells were collected and seeded at a density of 1x105 cells/ ml in 9 cm2 (3ml) wells by using 0.1% trypsin, 0.02% EDTA in Ca++ - and Mg - free Eagle's buffer for cell release. Cells were grown in one set of wells on sterile Trabecular Titanium™ disks with a pores size of 0,8µ (Figure 1). Another set of wells containing untreated cells was used as control. The medium was changed every 3 days.After seven days, when cultures were sub-confluent, cells were processed for RNA extraction. Figure 1: Trabecular Titanium™ structure. The diameter of the pores is of 0,8μ.

Expression was quantified using real time RT-PCR. The gene expression levels were normalized to the expression of the housekeeping gene RPL13A and were expressed as fold changes relative to the expression of the untreated BM-hMSCs. Quantification was done with the delta/ delta calculation method [16]. Forward and reverse primers and probes for the selected genes were designed using primer express software (Applied Biosystems, Foster City, CA, USA) and are listed in Table 1. All PCR reactions were performed in a 20 µl volume using the ABI PRISM 7500 (Applied Biosystems, Foster City, CA, USA). Each reaction contained 10 µl 2X TaqMan universal PCR master mix (Applied Biosystems, Foster City, CA, USA), 400 nM concentration of each primer and 200 nM of the probe, and cDNA. The amplification profile was initiated by 10-minute incubation at 95°C, followed by two-step amplification of 15 seconds at 95°C and 60 seconds at 60°C for 40 cycles. All experiments were performed including non-template controls to exclude reagents contamination. PCRs were performed with two biological replicates. The experiments were performed in triplicate.

BM-hMSCs cell surfaces were positive for mesenchymal stem cell marker, CD105, CD90 and CD73 and negative for markers of haematopoietic origin, CD34 (Figure 2). Transcriptional expressions of several osteoblast-related genes (RUNX2, SPP1, COLIA1, COL3A1, BGLAP, ALPL and FOSL1) and mesenchymal stem cells marker (ENG) were examined after 7 days of supplement treatment with Trabecular Titanium™. Quantitative real-time RT-PCR of FOSL1, ALPL, SPP1, BGLAP showed a significant induction after treatment with Trabecular Titanium™. However, Trabecular Titanium™ treatment did not significantly affect the mRNA expression of RUNX2 (slightly decreased) and the stem cell marker ENG (slightly increased) that were similar in both treated and untreated BM-hMSCs. COL1A1 and COL3A1 were decreased in the presence of Trabecular Titanium™ at day 7 (Figure 3). 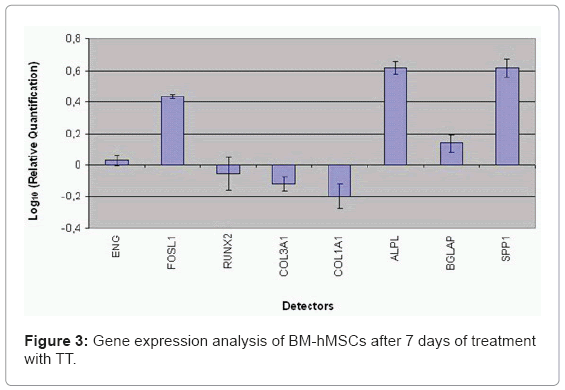 Figure 3: Gene expression analysis of BM-hMSCs after 7 days of treatment with TT.

Titanium and titanium alloys are widely used as implant materials due to their excellent biocompatibility and mechanical properties. The goal of prosthetic surgery is to have the best possible osseointegration to ensure stability and long-term survival rate of the implants [17]. Implant osseointegration at the tissue-prosthesis interface contributes to determining the success or the failure of the device. Growing on the implant surface, the osteoblasts are responsible for the tissue response on the biomaterial surface [18] whose modality and quality depend on the surface morphology.

Generally, it is possible to distinguish the macro-, mini-, microand nano-design of prostheses. The macrodesign is the shape of the prosthesis. The minidesign is related to the featured dimensions of the prosthesis, like indentations, threads and fins. The microdesign is the shape of the implant surface, due to surface treatments like machining, acid etching and sand-blasting procedures that determine the surface roughness, characterized by a cellular dimension [19]. Finally, the nanodesign is determined by the molecular composition of the surface. The porous Titanium surface is rough and it contains many pores and grooves of different sizes regularly distributed over the whole surface.

Mesenchymal stem cells are defined as self-renewable, multipotent progenitors cells with the ability to differentiate, under adequate stimuli, in several mesenchymal lineages, including osteoblasts [23]. The aim of this study was to verify the early effects of Trabecular Titanium ™ on osteogenesis. Therefore we treated BM-hMSCs cultures with Trabecular Titanium™ disks. In order to examinein further detail how Trabecular Titanium™ acts on BM-hMSCs, changes in expression of bone related marker genes (RUNX2, SPP1, COLIA1, COL3A1, BGLAP, ALPL and FOSL1) and mesenchymal stem cells marker (ENG) were investigated by real-time RT-PCR.

In our study, mesenchymal stem cells from human bone marrow were isolated and characterized by morphology and immunophenotype. Isolated BM-hMSCs showed fibroblast-like morphology and were positive for MSC surface molecules (CD90, CD105, CD73) and negative for markers of haematopoietic progenitors (CD34). After 7 days of treatment with Trabecular Titanium™ the expression levels of osteodifferentiation genes were measured by relative quantification methods using real-time RT-PCR.Two osteoblast-specific genes, SPP1 and BGLAP, that are generally expressed by osteoblast in the early stage of their differentiation [24], were up-regulate in treated BM-hMSCs.

ENG (CD105) mRNA expression, a surface markers used to define a bone marrow stromal cell population capable of multilineage differentiation [25], was similar in treated BM-hMSCs respect to control. There is an inverse correlation between CD105 expression and the differentiation status of MSC [26]. This gene is a receptor for TGF-β1 and -β3 [27] and modulates TGF-β signalling by interacting with related molecules, such as TGF-β1, -β3, BMP-2, -7, and activin A. It is speculated that these members of the TFG-β superfamily are mediators of cell proliferation and differentiation and play regulatory roles in cartilage and bone formation [28]. The disappearance of the CD105 antigen during osteogenesis suggests that this protein, like others in the TFG-β superfamily, is involved in the regulation of osteogenesis [29].

Expression of RUNX2 didn't have significant change in treated cells if compared to control after 7 days of treatment with Trabecular Titanium ™. RUNX2 is the most specific osteoblast transcription factor and is a prerequisite for osteoblast differentiation and consequently mineralization. This result is comparable with data reported by Kim et al. [30]. They showed that there was no BMP-2-mediated up-regulation of RUNX2 mRNA expression at days 3 or 7, but BMP-2 treatment induced a significant and time dependent increase in SP7 mRNA expression [30].

Alkaline phosphatase regulates mineralization of bone matrix. Several studies demonstrated that the potency of individual substances to induce alkaline phosphatase varies in a species-dependent manner. Glucocorticoids such as dexamethasone are potent inducers in human and rat stromal cells, but they have no effect on alkaline phosphatase activity in mouse stromal cells [31,32]. The Trabecular Titanium™ induced ALPL mRNA production. Trabecular Titanium™ also modulates the expression of FOSL1 that encodes for Fra-1, a component of the dimeric transcription factor activator protein-1 (Ap-1), which is composed mainly of Fos (c-Fos, FosB, Fra-1 and Fra-2) and Jun proteins (c-Jun, JunB and JunD). Ap-1 sites are present in the promoters of many developmentally regulated osteoblast genes, including alkaline phosphatase, collagen I, osteocalcin (OC). McCabe et al. [33] demonstrated that differential expression of Fos and Jun family members could play a role in the developmental regulation of bone-specific gene expression and, as a result, may be functionally significant for osteoblast differentiation. Studying the effect of new anabolic agents that stimulate bone formation, Kim et al. [34] found that this gene is activated in the late stage of differentiation, during the calcium deposition. In our study FOSL1 was up-regulated thus demonstrating that Trabecular Titanium ™ induces osteoblast differentiation in BM-hMSCs.