Characteristics and Etiology of Hearing Loss among the School for the Deaf Children in Ife-Ijesha Senatorial District of Osun State, Nigeria | OMICS International

Characteristics and Etiology of Hearing Loss among the School for the Deaf Children in Ife-Ijesha Senatorial District of Osun State, Nigeria

Copyright: © 2013 Bola AY, et al. This is an open-access article distributed under the terms of the Creative Commons Attribution License, which permits unrestricted use, distribution, and reproduction in any medium, provided the original author and source are credited.

Background: In developing countries, the awareness about hearing impairment is low. This has led to unavailability of early screening program.
Objective: To document the conditions associated with the auditory functions in children at schools for the deaf in a senatorial district of Osun state.
Design: A cross-sectional descriptive epidemiological survey. One hundred children who were attending the six special schools were studied. Medical histories were obtained through questionnaire. Otoscopy was done on all subjects and pure tone audiometry test was carried out on the children above 4 years.
Result: The mean age of detection of hearing loss was 19 months while the age at which they seek help was 24 months. There was a male preponderance and the children were admitted to the schools at 5 years. Maternal ailment occurred in 22% of the deaf children. Birth asphyxia and neonatal jaundice occurred in 19% and 15% respectively. Measles was associated with hearing loss in 39%. Impacted wax was the most common otoscopic finding. Moderately severe hearing loss occurred in 8% of the population, 28% had severe hearing loss while 64% was profoundly deaf. There was lack of access to hearing aids in over 90%. There were no adequate classrooms and teachers nor facilities for proper habilitation. 30% of the children had other handicaps.
Conclusion: The conditions associated with hearing loss in this study were largely preventable through improved obstetric care and childhood immunization programme. Early auditory screening is essential and a better habilitation programme needs to be developed for the Nigerian deaf children.

Hearing loss is a very common problem and a severe handicap in many developing countries including Nigeria. This is so because many are illiterates and with associated hearing impairment they are unable to communicate by reading and writing. Yet ability to take part in normal conversations is essential for economic and social survival [1,2]. It had been documented in the literature that two thirds of the world populations with hearing impairment are in the developing countries. In Nigeria one in seven children suffers from hearing loss [3] and in the Sierra Leone four children out of every 1000 are deaf and many of them have developed no speech. Studies from Kenya, Gambia and Tanzania found 2-4 children out of 1000 to suffer severe to profound Hearing loss (HL) [4-6] Quite a number of families with children suffering from severe hearing loss are still ashamed to bring their children out for assessment and rehabilitation. Even though the facilities for screening, diagnosis and rehabilitation of these children are scarce the parents are also unwilling to seek help. The resultant of this failure to pay attention to this common ailment is the inability of many of the affected children to develop them and they end up being beggars on the street or they end up doing menial jobs which cannot sustain them thus perpetuating the poverty level in the land.

This study was aimed at evaluating the age of identification of the child, the etiology and the associated factors for hearing loss, the adequacy of habilitation facilities available at the schools for the deaf in the Ife-Ijesha senatorial district of Osun State. These schools are for the deaf children and also for the deaf children with multiple disabilities.

Ife-Ijesha senatorial district is one of the 3 senatorial districts in Osun State. There are ten Local Government Areas (LGA) in the district and 6 special schools for the deaf in the senatorial district. The estimated population of the senatorial district is 600,000. All the special schools were enrolled for the study. There were a total of 150 deaf children enrolled in all these six schools. To gain access to the schools, permission was sought and granted by the local inspector of education and the head of each school. The parents /guardians were also intimated about the study by sending letters to them through the school’s authorities. Since the study population was not large an all-inclusive method was used and every pupil of these schools was included in the study. There were 100 students in all who participated in the study. This was a cross-sectional descriptive epidemiological study. The data collection was through the use of an intervieweradministered open and close ended questionnaire. Data were collected from the parents, teachers and the school records. Information sought were: Socio-demographic characteristics, prenatal and perinatal predisposing factors, history of childhood illnesses, immunization history, ratio of number of teachers to the children, facilities on ground for teaching and rehabilitation.

Otological examinations were done using a battery operated otoscope with a magnifying lens. A diagnostic Audiometry (Earscan model) was used for the Audiological-screening test using the quietest part of the school premises or the library where available. The Pure Tone Average (PTA) was determined by using the four frequencies 0. 5 KHz, 1 KHz, 2 KHz, and 4 KHz.

Analysis of the data was done using the statistical package for social sciences (SPSS) soft ware. The results were presented using frequency tables, percentages and charts.

The mean age of the children was 11.25 ± 4.6 while the mean age at detection of problems by the parents was 19 months. The mean age at seeking for help was 24 months. There was a male preponderance (66 male and 34 females). The age ranged between 2-20 years. Ife senatorial district is predominantly a Yoruba speaking area and majority of the respondents were from the Yoruba ethnic stalk (93%). Educational background of the parents revealed that 40% of the parents are illiterate, while 42% had at least secondary school education and 17% had elementary education.

Place of delivery: Delivery in 54% of the children was conducted by trained medical personnel while delivery was at home /mission house by untrained midwives in 46%. 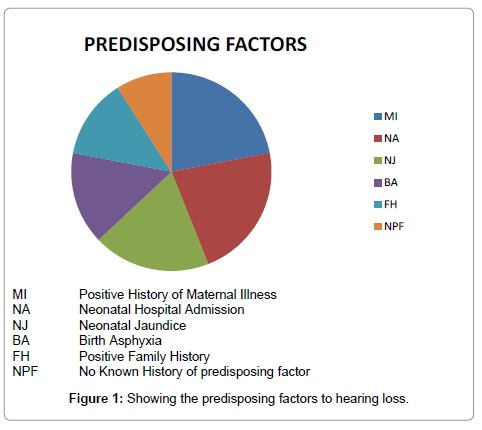 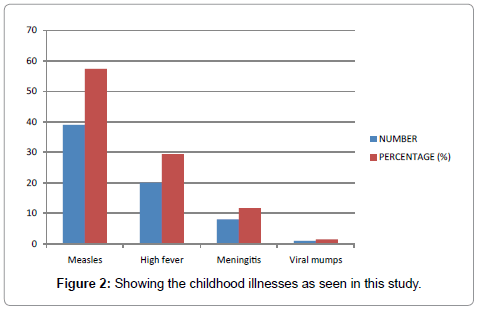 Figure 2: Showing the childhood illnesses as seen in this study.

Facilities at the school: Almost all the schools has 2-3 teachers to teach all levels (i. e. elementary 1-6), including children with multiple disabilities.

Classroom facilities: Usually 1 large room accommodates 3-4 classes, in 50% of the school visited large hall shared by primary 3–6, with Primary 1&2 in a separate class in 2 out of the 6 schools. 1 large hall for all the pupils (primary 1–6) and one special teacher for all in the 6th school.

Hearing aids: Ninety six percent had neither access to hearing aids nor any other auditory rehabilitative devices.

Hearing aid has just been procured for only 4% of the study population. The Reasons for not using hearing aids were unavailability and prohibitive cost over 90%.

The first few months of life is the most critical time for stimulating auditory pathways to hearing center of the brain [7]. When hearing loss in infants is detected beyond this period it leads to a significant delay in speech and language development [8]. This study showed that Nigerian children are usually diagnosed late well beyond this critical period, as the mean age at identification was 19 months. In spite of this, parents usually do not seek help until the age of 4-5 yrs. The interval is usually spent on looking for a surgeon to release the “tongue tie” and prayer houses as people still believe that hearing loss is due to tongue-tie or spiritual attack in our environment.

Etiology is usually classified as hereditary, acquired and unknown. The etiology of hearing loss as found in this study agrees with the finding in the literature [9-13]. Acquired etiology was the most common, while hereditary etiology was the least. Childhood illnesses was found to be a large contributory factor to acquired causes of hearing loss, It is to be noted that 39% of the children were noticed to have hearing loss by their parents after measles infection, while 20% had a very high fever before their onset of the hearing loss. Meningitis and mumps were the other implicated childhood illnesses associated with hearing loss. The affected children were observed to have been hearing well before the onset of the above illnesses. It could be inferred that adequate attention to childhood illnesses prevention programme through improved immunization against childhood diseases could have prevented this. The use of Hearing Aids was found in 4% of the children, and this had just being procured for the children (i.e. after admittance to the school for the deaf). The reasons for non-usage are related to low level of awareness of hearing loss among the population and to poor socio- economic factors. In a similar study in Turkey the use of hearing aids after and before admittance to the school were found to be 32.3% [14] and 9.13% [15]. Hearing aid usage before the age of 3 years as is done elsewhere is more of an exception than the rule among Nigerian children. Early neonatal screening is highly necessary in our environment to achieve a better outcome.

The most common otoscopic finding in these children was cerumen impaction. This agrees with the literature [3,14-16].

All the children suffered from deaf mutism. An earlier screening of these children could have led to an earlier diagnosis and rehabilitation, which could have prevented the delay in speech and language development. It had been found that when children are not identified early and do not receive early intervention it costs schools additional $420,000 per individual child and has a lifetime cost of approximately $1.1 million per individual child [17]. Unfortunately, the underdeveloped countries can ill afford this. It is therefore more cost effective to identify these children early so that appropriate intervention could be planned. Research has also shown that children with hearing loss who are identified early and given appropriate intervention before the age of 6 months demonstrated significantly better speech and reading compression than children identified after 6 months [18] the burden of extensive habilitation during school year is thus drastically reduced [18]. A total of 10% of the study population sought help for their hearing loss by visiting the Hospital or an Audiologist. In the majority of the children it was a general believe that the hospital does not have much to offer a deaf child, so the parents will rather like to keep it as a secret rather than submitting the child for evaluation and thereby exposing the “family secret”. These are areas that will require a lot of education and parent counseling in order to enjoy parent’s cooperation in the identification and rehabilitation of a hearing impaired child.

All the children failed to develop spoken speech and they all had to learn sign language. The use of Hearing aids is beyond the reach of most Nigerian family. Cochlear implant could have been of benefit to some of the children however the cost of the procedure and the after care is certainly not affordable for Nigerian.

The Authors will like to thank the following for their contributions in data collection. Drs Adewoyin A, Olaiya OR, Adefisan A, Adeleke M and Ajimuda O.

We, the under listed signatories write to confirm that we are the authors of the paper title Characteristics and Etiology of Hearing Loss Among the School for the Deaf Children in Ife-Ijesha Senatorial District of Osun State, Nigeria.

We take responsibility for the proper conduct of the study and strict adherence to ethical guidelines.