D-Neuron: Is it Ligand-Producing Neuron of Taar1? From Schizophrenia Research

Copyright: © 2013 Ikemoto K. This is an open-access article distributed under the terms of the Creative Commons Attribution License, which permits unrestricted use, distribution, and reproduction in any medium, provided the original author and source are credited.

Recent pharmacological studies has been shown the importance of trace amine-associated receptor, type 1 (TAAR1), a subtype of trace amine receptors, as a prospective target receptor for novel neuroleptics. In the present article, the author shows D-neuron research in psychiatric field. Although dopamine (DA) dysfunction is a well-known hypothesis of etiology of schizophrenia, its molecular basis has not yet been clarified. To explain this, modulating function of trace amines on DA neurotransmission was considered. The TAAR1 has a large number of ligands, including tyramine, β-phenylethylamine and methamphetamine that influence on human mental state. Reduced stimulation of TAAR1 on DA neurons in the midbrain ventral tegmental area (VTA) has been revealed to increase firing frequency of VTA DA neurons. Previously, the author and her colleagues reported D-neuron decrease in the striatum including nucleus accumbens of postmortem brains of patients with schizophrenia. This implies the decrease of trace amine synthesis and consequent reduction of TAAR1 stimulation on terminals of midbrain VTA DA neurons, and may lead to mesolimbic DA hyperactivity in schizophrenia. Striatal D-neuron decrease of postmortem brains, due to neural stem cell dysfunction in the subventricular zone of lateral ventricle, might be pivotal in etiology of schizophrenia. The new “D-cell hypothesis”, in which D-neurons and TAAR1 are involved, is concordant with recent reports showing effectiveness of TAAR1 ligands for schizophrenia model animals.

The “D-cell” was described in 1983 in the rat central nervous system and was defined “the non-monoaminergic aromatic L-amino acid decarboxylase (AADC)-containing cell” [10]. The D-cell contains AADC but not dopaminergic nor serotonergic [10]. D-cells produce trace amines [11,12], and may also act as an APUD (amine precursor uptake and decarboxylation) system that takes up amine precursors and transforms them to amines by decarboxylation [13]. The localizations of D-cells were specified into 14 groups, from D1 (the spinal cord) to D14 (the bed nucleus of stria terminalis) in caudo-rostral orders of the rat central nervous system using AADC immunohistochemistry [14,15]. In this usage, the classification term “D” means decarboxylation. In rodents [13,16,17], a small number of D-cells in the striatum were rostrally described and confirmed to be neurons by electron-microscopic observation [13]. I reported in 1997, “dopa-decarboxylating neurons specific to the human striatum [18-21]”, that is, “D-neurons” in the human striatum [20,22] (classified to be D15) [20], and later, the reduction of the number of D-neurons in the striatum, including nucleus accumbens of patients with schizophrenia [9,22].

Cloning of trace amine receptors in 2001 [23,24], elicited enormous efforts for exploring signal transduction of these G-protein coupled receptors whose genes are located on chromosome focus 6q23.1 [25]. The receptors have been shown to co-localize with dopamine or adrenaline transporters in monoamine neurons and to modulate the functions of monoamines [26-28]. The trace amine-associated receptor, type 1 (TAAR1) having a large number of ligands, including tyramine, β-phenylethylamine (PEA) and psychostimulants, for example methamphetamine, 3,4-methylenedioxymethamphetamine (MDMA) and lysergic acid diethylamide (LSD) [23,25,29], has become a target receptor for exploring novel neuroleptics [30,31]. TAAR1 knockout mice showed schizophrenia-like behaviors with a deficit in prepulse inhibition [32]. TAAR1 knockout mice showed greater locomotor response to amphetamine and released more DA (and noradrenaline) in response to amphetamine than wild type mice [32]. It has been shown that TAAR1 has a thermoregulatory function [33]. It was clarified that increased stimulation of TAAR1 receptors on cell membranes of DA neurons in the midbrain ventral tegmental area (VTA) reduced firing frequency of VTA DA neurons [30-32].

A new “D-Cell Hypothesis” of schizophrenia

A new theory, “D-cell hypothesis”, for explaining mesolimbic DA hyperactivity in pathogenesis of schizophrenia is shown in Figure 1. In brains of patients with schizophrenia, dysfunction of neural stem cells in the subventricular zone of lateral ventricle causes the decrease of D-neurons in the striatum and nucleus accumbens [8,34]. This leads to the decrease of the amounts of trace amines in the nuclei, though direct evidences have not yet been demonstrated. Enlargement of the lateral ventricle [35,36], a usual finding documented in brain imaging studies of schizophrenia, is possibly due to dysfunction of neural stem cells of the subventricular zone [7,8]. 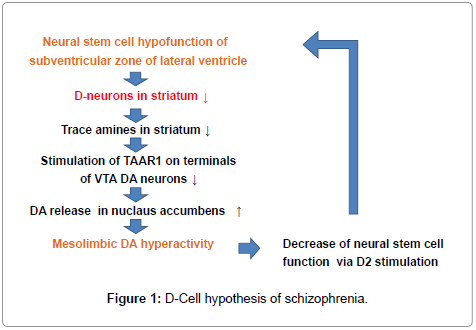 The reduction of TAAR1 stimulation on DA terminals of VTA DA neurons, caused by trace amine decrease, would increase the firing frequency of VTA DA neurons [30,32]. This leads to the increase of DA release in the nucleus accumbens, resulted in mesolimbic DA hyperactivity. It has been shown that D2 stimulation of neural stem cells in the striatum inhibited forebrain neural stem cell proliferation [37]. Then, striatal DA hyperactivity may accelerate D-neuron decrease, which accelerates hyperactivity of mesolimbic DA system. Actions of D2 blocking agents in pharmacotherapy of schizophrenia might partially be explained by the decrease of inhibition to forebrain neural stem cell proliferations. It is consistent with clinical evidences that initial pharmacotherapy using D2 blockers is proved to be critical for preventing progressive pathognomonic procedures of schizophrenia.

The D-neuron, i.e., the possible trace amine-producing neuron, is a clue for schizophrenia research. Further exploration of signal transduction of the D-neuron is essential.

The present study was supported by Grant-in-Aid for Scientific Research from Japan Society for the Promotion of Science (C-22591265).