Copyright: © 2013 Arora A, et al. This is an open-access article distributed under the terms of the Creative Commons Attribution License, which permits unrestricted use, distribution, and reproduction in any medium, provided the original author and source are credited.

The prevalence of the metabolic syndrome is significant in nations with developed economies and is growing in countries with rapidly growing economies. The reasons for this are complex but include increased availability to cheaper (and less nutritious) food and increased mechanization. This results in reduced physical activity and an increase in total body fat and weight. Current inclusion criteria for the metabolic syndrome include parameters of obesity, elevated blood glucose, elevated triglycerides, and low HDL cholesterol. However, with the increased information regarding LDL (and specifically the small dense LDL particle) as a major risk factor for cardiovascular disease, no present consideration for LDL cholesterol as inclusion criteria for the metabolic syndrome is made. This article explores the role of LDL cholesterol as a cause and effect of complications with the metabolic syndrome in patients of these countries that are developing cardiovascular and metabolic diseases at an accelerated rate. Furthermore, as measurement of small dense LDL and apoprotein components becomes more widely available and cost effective, it may be that evaluation of these parameters and markers will assist the clinician and high-risk patient in the management and treatment of conditions that are associated with the metabolic syndrome.

Life in the 21st century presents with an increased global incidence of metabolic and vascular events including diabetes mellitus, cardiovascular disease, stroke and peripheral arterial disease. The prevalence of these diseases remains high in the United States, Canada, Japan, the Republic of Korea, and many European nations. Moreover, there is a substantial increase in the incidence of these disorders in developing countries (which include most Asian countries plus countries in Latin America and Africa), and the higher rate of these diseases is a result in part to a lifestyle that couples reduced physical activity with a moderate to high calorie intake. Moreover, this change in lifestyle seems to be the integral cause of the rapid increase in the prevalence of the metabolic syndrome [1].

Metabolic syndrome is defined as a clustering of abdominal obesity, hypertension, insulin resistance and dyslipidemia. Obesity guidelines based on Western populations markedly underestimate the risk of coronary artery disease (CAD) among all Asians. This is because Asians have a greater body fat at a given BMI. The World Health Organization (WHO) has, therefore, issued a lower cutoff point for overweight (BMI>23) and obesity (BMI>25) for all Asians. Even among Caucasians, substantial risk of premature CAD occurs at a waist circumference (WC) of >90 cm underscoring the dangers of abdominal obesity. Conversely, Asian men and women tend to have more metabolic abnormalities at a lower waist circumference (WC) than Caucasians. The WHO and International Diabetes Federation (IDF) have also issued a lower cutoff point for the diagnosis of abdominal obesity through WC for Asian men (90 cm) and women (80 cm) [2].

Many Asians develop diabetes and metabolic syndrome with a body mass index (BMI) below 25 kg/m2, a figure which is considered normal among Caucasians. Furthermore, Asians tend to have more metabolic abnormalities at a lower waist circumference than Caucasians. The optimum WC among Chinese has been found to be 80 cm for both men and women. In Asian Indians WC is 85 cm for men and 80 cm for women [3]. Among South Asians, in comparison to criteria from the National Cholesterol Education Program (NCEP), the prevalence of the metabolic syndrome is higher by 30%-50% when criteria from the South Asian Modified National Cholesterol Program (SAM-NCEP) are applied. When utilizing SAM-NCEP criteria, the incidence of the metabolic syndrome in these individuals is higher by 20% in comparison to similar criteria from the International Diabetes Foundation [4].

The figure below shows the prevalence in adults (25-64 years) from three ethnic groups who are residents in Newcastle upon Tyne, United Kingdom. The comparisons and contrasts between the ethnic groups mainly reflect differences in the prevalence of diabetes and obesity. Although common by both WHO and NCEP definitions, agreement between the definitions is not particularly good [5]. 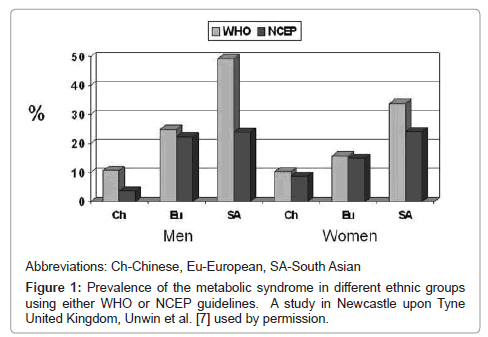 Figure 1: Prevalence of the metabolic syndrome in different ethnic groups using either WHO or NCEP guidelines. A study in Newcastle upon Tyne United Kingdom, Unwin et al. [7] used by permission.

The role of lipid abnormalities in diabetes and cardiovascular disease (CVD) has been emphasized. Patients with type II diabetes mellitus generally present with a dyslipidemia that is characterized by elevated VLDL, small dense LDL particles and decreased HDL. In addition, Asians with an increase in WC are noted to have this pattern of dyslipidemia [4]. The percentage of individuals having a significant number of dense LDL particles is increased by at least twofold in type II diabetes mellitus. The prevalence of this qualitative abnormality of LDL has been reported to be surprisingly high, even in the absence of the characteristic diabetic dyslipidemia. Thus up to 45% of patients with low triglyceride (TG) levels and an even higher percentage of patients with borderline hypertriglyceridemia are known to have elevated levels of small dense LDL particle size [8,9]. The need for an early detection of risk factors in insulin resistant patients (with or without overt diabetes mellitus) should be emphasized in the medical setting.

Hypertriglyceridemia, one of the involved factors in the metabolic syndrome, reflects an increased concentration of any of several lipoproteins (including chylomicrons, VLDL & LDL). It has been observed that LDL (subclass B) is characterized by a preponderance of small dense LDL particles [9]. This is associated with an increased risk of myocardial infarction and correlated with increased concentration of IDL (intermediate density lipoprotein)-C, VLDL-C, TG and low HDL-C levels. As hypertriglyceridemia is concomitant with increasing small LDL particles, hypertriglyceridemic matter gets replaced by small dense LDL particles [8]. An earlier hypothesis showed that prolonged presence of TG rich lipoproteins in the circulation leads to an increased exchange of their TG for IDL by cholesteryl ester transfer protein (CETP). TG enriched LDL is removed by hepatic lipase leading to the creation of small dense LDL.

The concentration of triglycerides correlates more closely with LDL size. It is known that TG concentration is inversely associated with LDL size (increased TG levels and small LDLs). We know that very small LDL size particles have the poorest LDL receptor binding [9]. Further, this type of LDL particle is considerably more susceptible to oxidation, thereby increasing the atherogenic risk. The triglyceride-to-HDL cholesterol ratio may be related to the processes involved in LDL size, pathophysiology and relevant with regard to the risk of clinical vascular disease. This would prove helpful for the selection of patients needing early or aggressive treatment for dyslipidemias.

LDL cholesterol is well noted to be an independent risk factor for coronary artery disease. Conversely, it is not required that the LDL-C parameter be taken as part of the metabolic syndrome, primarily in high risk patient patients such as diabetes mellitus in which there is an increased amount of small dense LDL particles. An estimate of the qualification of small dense LDL particles can be predicted by a rough estimation of clinical and laboratory parameters. These markers include diabetes mellitus, HDL below 35 mg/dl, and triglycerides above 250 mg/dl. Any one of the three parameters that are present gives a very high indication of the presence of a large quantity of small dense LDL particles [9,10] (Figure 2).