Copyright: © 2012 Yellepeddi VK, et al. This is an open-access article distributed under the terms of the Creative Commons Attribution License, which permits unrestricted use, distribution, and reproduction in any medium, provided the original author and source are credited.

In the United States, ovarian cancer ranks ninth among most common cancers and ranks fifth in cancer deaths, among women. It is estimated that approximately 22,280 women will be diagnosed and 15,500 women will die from ovarian cancer in 2012 [1]. It is also estimated that ovarian cancer will occur in 190,000 women and causes death in 114,000 patients annually worldwide [2]. According to the American Cancer Society, the rate at which women are diagnosed with ovarian cancer has been reduced in the past 20 years. However, the 5-year survival rate is still dismal at 46%. It was also reported that if ovarian cancer was detected and treated before it metastasizes; the 5-year survival rate will be around 93%. Unfortunately, less than 20% of all ovarian cancers are detected at this early stage [3]. The first-line treatment of ovarian cancer involves use of platinum based chemotherapeutic agents, such as cisplatin along with other anti-cancer drugs such as paclitaxel [4-6]. Cisplatin is widely used for the treatment of peritoneal carcinomatosis by Intraperitoneal (IP) administration [7,8]. Although clinical studies have demonstrated the superior efficacy of IP chemotherapy of cisplatin compared to Intravenous (IV) chemotherapy, IP cisplatin chemotherapy suffers from major drawbacks, such as poor penetration of cisplatin into peritoneal tumors and dose-limiting systemic toxicity due to infiltration of cisplatin into systemic circulation through peritoneum.

The first report on the potential of Intraperitoneal (IP) administration in ovarian cancer was published by Dedrick et. al. [9], in Cancer Treatment Reports. A theoretical modeling study supporting the examination of IP antineoplastic drug delivery for ovarian cancer was presented, and suggested that tumors in the peritoneal cavity should be exposed to higher cytotoxic drug concentrations with regional IP treatment [9]. Because of its low molecular weight and water solubility, cisplatin was reported to enter the systemic circulation rapidly after IP injection, leading to low concentrations in the peritoneal cavity and increasing risk of systemic toxicity [10]. The other limitation is that IP chemotherapy of cisplatin is limited to patients whose residual tumor nodules are less than 0.5 cm after a surgical debulking [11]. Poor penetration of cisplatin into the inner core within large tumor masses is also a reason for failure of IP chemotherapy of cisplatin [12]. To improve cisplatin penetration, either cisplatin should be in contact with the tumor for a longer period of time, or should be administered at very high concentrations. Both of these strategies have very high propensity of resulting in systemic side effects such as nephrotoxicity and myelotoxicity [13]. One attractive strategy to improve drug delivery to the peritoneal cavity and to reduce toxicity is use of tumor targeted drug delivery systems.

Dendrimer-cisplatin complexes were prepared by using a method developed in our lab previously [14]. Briefly, cisplatin was completely dissolved in 7.5 mL of water at 2 mg/mL concentration in a round bottomed flask. To this solution 20 mg of biotinylated and unconjugated dendrimers were added dropwise under stirring. The mixture was reacted for 4 hrs and dialyzed (3.5 kDa MW cutoff) against deionized water for 24 hrs. The final reaction product was lyophilized to yield a white product. Drug loading efficiency of dendrimer-cisplatin complexes was determined using inductively couple plasma-mass spectroscopy (ICP-MS). Briefly, 1 mg of dendrimer-cisplatin complex was dissolved in 1 mL of 0.9% Nacl solution. 100 μL of this solution was aliquoted and added to 5 mL of 1% HNO3 with 10 ng/mL iridium as the internal standard.

Quantification of cisplatin by ICP-MS

The ICP-MS system was comprised of an X Series ICP-MS (Thermo Electron Corporation, Madison, WI, USA) equipped with a Cetac 500 auto sampler (Cetac Technologies, Omaha, NB, USA). Analysis was performed in X-series default mode using 2.Xi+screen. The results were analyzed using PlasmaLab software (Thermo Electron Corporation). Major isotopes of platinum and iridium were monitored at m/z 195 and 193, respectively. Sample 6 nebulization was performed using a concentric nebulizer and detection modes for both isotopes were “scanning”. Details of ICP-MS operating conditions are given in table 1. Quantification was based on the mean (n=3) intensity ratios for platinum and iridium against a calibration curve using linear regression analysis. All standards and samples were prepared in 1% OmniTrace® nitric acid. A standard platinum calibration curve was prepared with concentrations from 0.1 to 1000 ng/mL. In all standard solutions iridium was added to get a final concentration of 10 ng/mL.

Plasma (100 μL) was separated from freshly collected blood (200 μL) by centrifugation at 4000 rpm. Plasma samples were digested with concentrated nitric acid (HNO3) (70%) and after digestion samples were dried at 85°C overnight. Similarly, isolated tissues were homogenized using an Omni 2000 Tissue Homogenizer, Omni international, GA, USA, and were digested with concentrated HNO3 (70%) and dried at 85°C overnight. Both plasma and tissue dried samples were reconstituted with 1% HNO3 and 10 ng/mL of iridium was added as internal standard prior to analysis by ICP-MS. The standard graph of cisplatin was prepared by spiking cisplatin with blank plasma and tissues using concentrations, ranging from 0.1 ng/mL to 1000 ng/mL.

Animals: Female athymic nude mice 4 weeks old were procured from Harlan Laboratories (Indianapolis, IN, USA) and were housed at Pharmaceutical Research Facility, Texas A&M Health Science Center, Kingsville, Texas. All mice were housed and maintained under specific pathogen-free conditions according to guidelines of the American Association for Accreditation of Laboratory Animal Care (AAALAC), and the facility was operated in accordance with current regulations and standards of the U.S. Department of Agriculture (USDA), U.S. Department of Health and Human Services, and NIH. All protocols were approved by the institutional animal care and use committee of the College of Pharmacy (Protocol No. 10039). The mice were maintained on a standardized 12-h light and 12-h dark cycle and were provided access to food and water ad libitum. Animals were fed with irradiated 5053 PicoLab® rodent diet 20, PMI Nutrition International, St. Louis, MO, USA.

SKOV tumor model was chosen because SKOV cells have the ability to get implanted directly on the peritoneal wall, resulting in numerous visible microtumor nodules and parietal thickening, resembling disease in humans [18]. Tumors were initiated by IP injection of SKOV cells (5×106), and mice were separated into four groups of 8 mice each for survival studies and three groups of 10 mice each for biodistribution studies. Tumors established by IP injection of cells reflect the growth pattern of advanced epithelial ovarian cancer and is widely used as a clinically relevant model for studying epithelial ovarian cancer [19]. Mice were evaluated weekly for tumor growth and/or ascites fluid accumulation. The animals were considered to have developed ascites if they showed clinical signs of tumor formation such as reduced movement, slightly hunched back, matted fur and reduction in animal weight. All animals in survival studies were sacrificed by 50 days after tumor initiation.

Cisplatin, PAMAM G4 NH2 cisplatin and Biotin-PAMAM G4 NH2 cisplatin, were administered by IP injection (500 μL) with PBS as the vehicle. The control groups of animals were administered PBS and other groups received 4 mg/kg equivalent of cisplatin either in solution or as dendrimer-cisplatin complexes four times with an interval of a week between each administration. Animals were euthanized using CO2 at 4 hrs and 24 hrs and blood was collected by cardiac puncture. In the biodistribution study brain, lung, heart, liver, kidney, and spleen, were isolated.

Synthesis and characterization of Biotin-PAMAM dendrimers

Dendrimers were biotinylated resulting in a product with high yield (>85%). Biotinylation was confirmed by 1H NMR by identifying biotin ring juncture protons at δ=4.4 and 4.6 ppm which were absent in the native PAMAM dendrimers (Figure 1) [15].To further confirm the conjugation and degree of biotinylation, biotinylated PAMAM dendrimers were analyzed using MALDI-TOF spectroscopy. MALDI-TOF depicted that approximately 27 biotin molecules were conjugated to PAMAM G4 NH2 dendrimers (Figure 2) [15]. 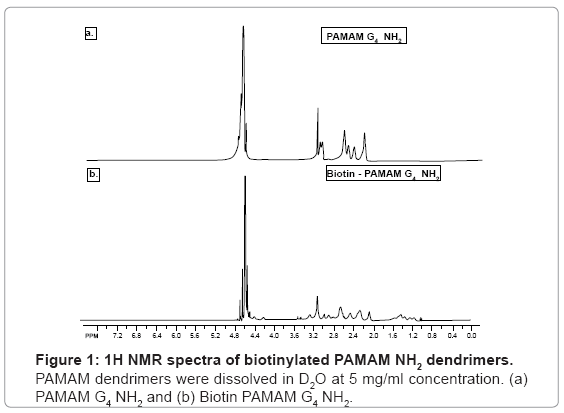 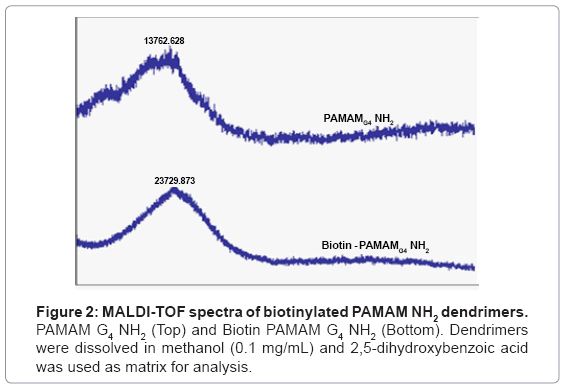 Optimization of suitable analytical method for estimation of cisplatin

Various analytical methods for cisplatin quantification in plasma and tissues were developed using UV, HPLC and ICP-MS. The suitable analytical method was chosen based on parameters such as ease of sample preparation, robustness and sensitivity. Data showed that UV and HPLC methods were not sensitive (LLOQ 1 μg/mL). Moreover, derivatization of cisplatin by DDTC in those methods made the method cumbersome. Both UV and HPLC methods were not robust as the results were inconsistent when pH of the sample matrix was changed. Based on these observations ICP-MS was chosen as suitable method for estimation of platinum in plasma and tissues, as it is very sensitive (LLOQ 0.1 ng/mL), robust and convenient.

PAMAM G4 NH2 and Biotin PAMAM G4 NH2 dendrimer-cisplatin complexes were investigated for in vivo anti-tumor efficacy by evaluating their ability to prolong survival of tumor bearing mice. Procedures involving SKOV xenograft mouse tumor model were conducted in conformity with guidelines of the American Association for Accreditation of Laboratory Animal Care (AAALAC). Mice were monitored daily for body weight and signs of tumor progression such as abdominal distension, hunched back and matted fur. For survival studies, animals were sacrificed after reaching a predetermined endpoint characterized by weight loss exceeding 15% associated with anorexia, and/or diarrhea. Survival curves for the control and the treatment groups are shown in figure 3. All survival curves for treatment groups were significantly different from the control groups (p<0.033), which were associated with median survival times of 28.5 to 32.5 days (Table 2). Treatment with IP PAMAM G4 NH2-cisplatin and Biotin PAMAM G4 NH2-cisplatin resulted in a 41.9 % and 25.8 % increase in lifespan, when compared with treatment of cisplatin alone. Moreover, treatment with IP PAMAM G4 NH2- and Biotin PAMAM G4 NH2 dendrimer-cisplatin did not reduce the body weight in comparison with cisplatin (data not shown). Survival studies clearly indicate that eventhough biotinylation enhances the targeting ability of PAMAM dendrimers, it is limiting the cytotoxic efficacy of platinum probably by interfering with their interaction with DNA in cancer cells. 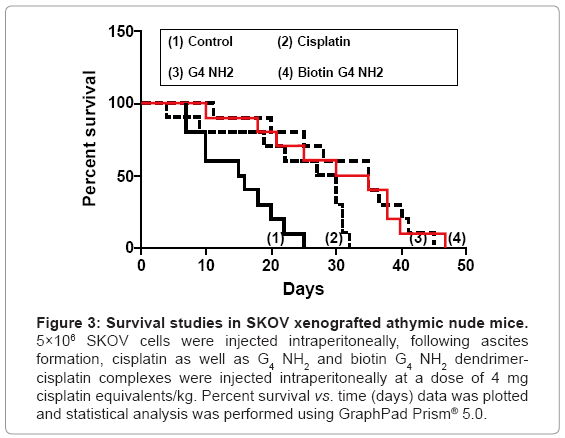 Table 2: Statistical analysis of the results obtained from survival studies. 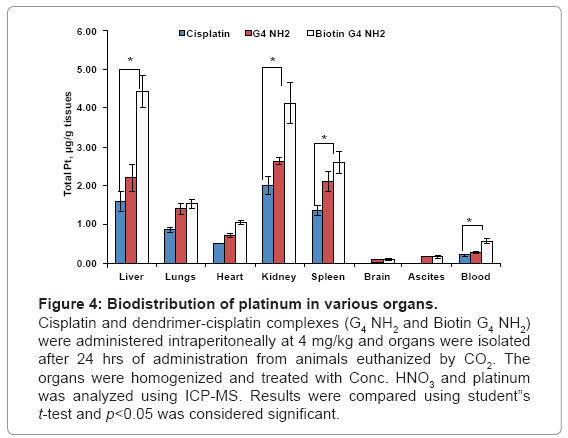 Figure 4: Biodistribution of platinum in various organs.
Cisplatin and dendrimer-cisplatin complexes (G4 NH2 and Biotin G4 NH2) were administered intraperitoneally at 4 mg/kg and organs were isolated after 24 hrs of administration from animals euthanized by CO2. The organs were homogenized and treated with Conc. HNO3 and platinum was analyzed using ICP-MS. Results were compared using student‟s t-test and p<0.05 was considered significant. 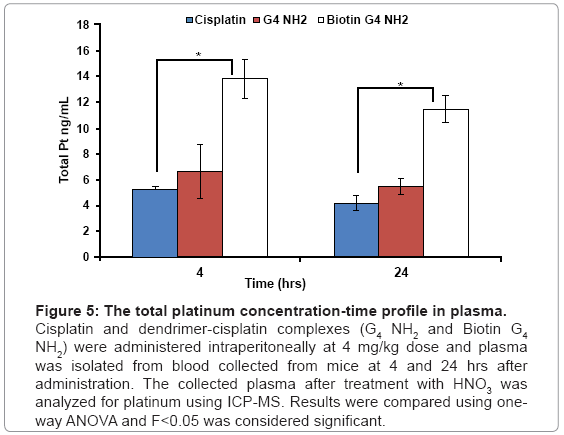 Figure 5: The total platinum concentration-time profile in plasma.
Cisplatin and dendrimer-cisplatin complexes (G4 NH2 and Biotin G4 NH2) were administered intraperitoneally at 4 mg/kg dose and plasma was isolated from blood collected from mice at 4 and 24 hrs after administration. The collected plasma after treatment with HNO3 was analyzed for platinum using ICP-MS. Results were compared using oneway ANOVA and F<0.05 was considered significant.

In conclusion, all the dendrimer-cisplatin complexes studied have shown greater anti-tumor efficacy in vivo as compared to cisplatin alone. Though toxicity experiments were not performed in the present study, higher accumulation of cisplatin in liver and kidney suggests the need to improve the retention of dendrimer-cisplatin complexes in the peritoneal cavity, may be by using external stimuli-(such as magnetic field, ultrasound, etc.) responsive nanoparticles of cisplatin. Under the control of such external stimulus, these nanoparticles may retain in the “tumor sanctuaries” interspersed across the peritoneum for extended duration and show high therapeutic activity with minimal non-target distribution and lower magnitude of side effects.

This work was supported partly by a grant from National Institutes of Health (NIH R15 CA121980-01) to S. Palakurthi. Authors would also like to thank Mr. Donald Marek, Ms. Yaneth Gamboa of environmental engineering department, Texas A&M University, Kingsville, for helping with ICP-MS.