46, XX Male or Ovotesticular DSD (SRY-negative) without SRY, is it Possible to have Testicular Tissues?

46, XX Male or Ovotesticular DSD (SRY-negative) without SRY, is it Possible to have Testicular Tissues?

The 46, XX male syndrome, or the 46, XX testicular Disorder of Sexual Differentiation (DSD) is rare. We report a clinical case of a male infant 46, XX, DSD with SRY negative. This observation suggests that genes other than SRY play an important role in determining sex. From this case we will present a review of the literature to take stock of the subject.

The foetal sex differentiation depends on a number of cellular and hormonal signals that interact in a specific order but still poorly defined to contribute to the establishment of the genital apparatus and a male or female phenotype [1].

• Establishment of the genetic sex at the time of fertilization.

• The establishment of the gonadal sex which represents the differentiation pathway of the gonads. It encompasses the determination and subsequent differentiation of the bipotential foetal gonad into testis or ovary. Then, the internal structures will be set up from two parallel channel systems present in the embryo: the Wolff and Müller ducts.

• The hormonal production by the differentiated testis of two capital hormones for the virilisation of the male foetus: the anti-Müllerian hormone (AMH) and the testosterone.

• The AMH will allow the regression of the Müller ducts while the testosterone is responsible for the development of the Wolff ducts.

• The development of phenotypic sex results in differentiation of the external genital organs and the urogenital sinus.

This last stage of sexual differentiation depends on the testosterone and dihydrotestosterone (DHT) action via the androgen receptor [2].

A good knowledge of sexual differentiation makes it possible to understand the classification of "Anomalies of sexual development" or rather disorders of Sex Development (DSD) [2].

Described for the first time by De la Chapelle, in 1964, the syndrome of male 46, XX intrigued the world of genetics [3,4]. It is defined as the presence of a male phenotype with a karyotype 46, XX. It was originally called "XX male syndrome," but in 2005, its nomenclature was revised in 46, XX DSD by a joint committee of the American Society of Paediatric Endocrinology and of the European Society for Paediatric Endocrinology. The incidence is estimated at 1 in 20,000 to 25,000 male live births [5].

At the molecular level, males XX can be classified as 46, XX SRY positive or 46, XX SRY negative, depending on whether or not the SRY gene is present.

We report the case of a male infant, 46, XX, DSD with SRY negative. The SRY gene is crucial for the genetic signal triggering the development of the embryonic testis. [6] Therefore, cases of male 46, XX DSD, where SRY is absent, are of particular interest as they suggest the existence of other genes instrumental to sex determination.

This is an infant, the fourth of four siblings (3 living healthy brothers) sent to the genetic reference center for the management of a sexual differentiation anomaly. The child had already been declared a boy by the parents and raised as such.

Anomalies of the external genital organs were observed by the mother about the fifteenth day of life.

The interrogation did not find any consanguinity or any maternal antecedents except for arterial hypertension.

Pregnancy was complicated by pre-eclampsia requiring hospitalization for surveillance. The child was born through spontaneous eutocic vaginal delivery to 35 weeks of amenorrhea and 4 days; with an Apgar score of 7 then 9 respectively at 1 and 5 minutes of life.

The infant was seen at the genetic reference center at the age of 45 days and his examination found:

• Examination of the external genital organs (Figures 1 and 2) found a Stage IV of the PRADER classification (aspect of posterior hypospadias male) with a penniform bud, an incomplete prepuce, and a posterior perineal hypospadias. The genital bulges had a scrotum-like appearance in which gonad-like formations were found when palpated. 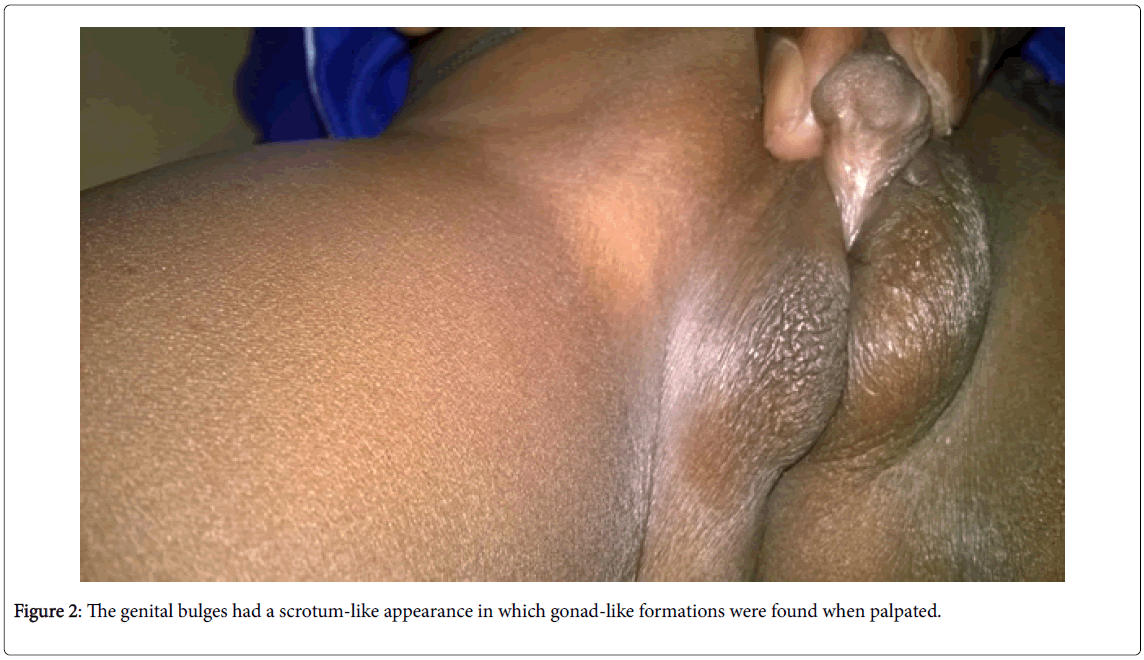 Figure 2: The genital bulges had a scrotum-like appearance in which gonad-like formations were found when palpated.

• There were no other malformations.

The paraclinical assessment found a discrepancy between imaging results and the genetic test conclusions and the dosage of the hormones with:

• An abdominal-pelvic ultrasound noted an absence of uterus, testis in place and bilateral hydrocele of medium abundance associated with persistence of the bilateral peritoneal-vaginal canal,

• The hormonal examination showed a rate of 17 alpha hydroxy progesterone at 0.10 ng/ml (normal), a normal (55 ng/ml) cortisol level, a testosterone level of 0.17 nmol/l (normal) and a dihydrotestosterone less than 0.05 ng/ml.

In total, it was an infant with a karyotype 46, XX, DSD and a discrepancy between the karyotype and the gonophoric and anatomical aspect.

The surgical exploration decided at a multidisciplinary meeting found an absence of uterus, a right gonad, with an ovarian aspect (without vas deferens or epididymis) and a left gonad with an undifferentiated aspect without epididymis or deferent whose vessels were joined to a bag.

• For the left gonad: a fibrous tissue encompassing seminiferous tubes evolving in an abundant fibrous mesenchyme devoid of Leydig cells.

For the right gonad: an abundant fibrous tissue sheltering tubes of little seminiferous aspect evolving in this abundant mesenchyme deprived of Leydig cells.

As a result, the left and right Gonads had testicular differentiation.

XX DSD with normal male phenotype remains a rare diagnosis with an incidence of 1 in 20,000 to 25,000 live births.

In this case, it is a 46, XX testicular or ovotesticular DSD whose testes appear to be very dysgenetic although the macroscopic aspect of the right gonad is that of an ovary.

In most cases reported in the literature, the diagnosis is made much later, in adulthood and most often in the context of the assessment of an azoospermia.

The SRY gene is present only in 80% of men 46, XX. [2] For many years, the presence of testicular tissue in the absence of SRY was not explained.

Most males 46, XX without SRY show a severe hypomasculinization with an asymmetry of EGOs, most often confirmed by the presence of an ovotestis when a gonad study was carried out. More than 70% of ovotestis, formerly ‘’true hermaphrodite’’, have a karyotype 46, XX [7,8]. A duplication of the SOX9 gene leading to virilisation of EGOs in a subject 46, XX was the first molecular evidence in humans that in the absence of SRY, overexpression of SOX9 may allow the formation of testicular tissue [9].

Later, mutations in the RSPO1 gene involved in the formation of the ovary were identified in several males 46, XX also showing severe palmoplantar hyperkeratosis and high susceptibility to skin cancer [10]. Recently, overexpression of SOX9 due to duplication of a specific region upstream of the SOX9 gene promoter explains several cases of males 46, XX with ovotestis [11].

These observations confirm the studies in transgenic mice where the invalidation of a gene responsible for ovarian differentiation or the overexpression of Sox9 virilise female mice by allowing the development of Leydig cells in the ovary [12,13]. These observations underline the fragility of the balance between the factors responsible for testicular and ovarian differentiation. However, overexpression of SOX9 or SOX3 and RSPO1 and WNT4 gene mutations does not explain the pathology of all males 46, XX without SRY and 46, XX ovotestis.

For our patient the inaccessibility of the molecular biology techniques explains that we could not go so far in the investigations. The management of these patients is multidisciplinary and requires coordinated actions between endocrinologists, pediatricians and neonatologists, surgeons, geneticists and biologists who can improve management while insisting on the role of psychological support to families.

From a therapeutic point of view, our patient is expected to have a correction of the hypospad, and long-term monitoring to detect puberty disorders, appearance of gynecomastia at puberty, but also, and above all, impairment of fertility.

Although abnormalities of sexual development with testicles associated with a karyotype 46, XX are rare, but this clinical case illustrates all their interest for the clinician.

From a practical point of view, the approach to etiologic diagnosis must always begin with a thorough clinical analysis of anomalies in the development of internal and external genital organs and the associated signs, a karyotype, a biological assessment based on a few key parameters (AMH, steroids and gonadotropins) and evolution.

The management is multidisciplinary and requires coordinated actions between endocrinologists, paediatricians and neonatologists, surgeons, geneticists and biologists who can improve the management of these patients while insisting on the place of psychological support to families.

Copyright: © 2017 Ndour D, et al. This is an open-access article distributed under the terms of the Creative Commons Attribution License, which permits unrestricted use, distribution, and reproduction in any medium, provided the original author and source are credited.