Copyright: © 2013 Srivastava N, et al. This is an open-access article distributed under the terms of the Creative Commons Attribution License, which permits unrestricted use, distribution, and reproduction in any medium, provided the original author and source are credited.

Aim: The purpose of the study was to assess the effectiveness of three different ‘methods of teaching’ tooth brushing in young children and the effect of reinforcement on the learning skills of the child. Material and Methods: 60 children (7-9 years) were equally divided into 3 groups (Group I: Audio visual; Group II: individual instruction on cast; Group III-child as a model) based on the ‘method of teaching’ the tooth brushing to be used. Each group was further divided equally into reinforcer and non reinforcer sub groups according to the reinforcement schedule. After teaching the correct brushing technique, the oral hygiene status of the children was evaluated using modified plaque index. The correct brushing technique was re-taught to the children and the plaque scores were re-evaluated after one week in the reinforcer and nonreinforcer groups. The data was statistically analyzed utilizing the two ways ANOVA and Post Hoc-Bonferroni Multiple comparison test. Results: Maximum drop in post teaching plaque scores was seen in Group II (individual instruction on cast) and the least drop in plaque scores was observed in Group III (child as a model) . The percentage decrease in the post teaching plaque scores even confirmed Group II to be the most efficacious method with a drop in plaque scores to 48.6%. Also reinforcing the brushing instructions again after few days resulted in better reduction of plaque scores. Conclusion: Individual cast instruction group was most effective method for teaching brushing method when compared to other groups. It was further

It is known that one of the major factors that lead to occurrence of dental caries is the action of micro-organisms. These micro-organisms harbor themselves onto tooth structure in form of bio-film, thus leading of formation of the dental plaque [1]. WHO defined dental plaque as a specific but highly variable structural entity, resulting from sequential colonization of microorganisms on tooth surfaces, restorations & other parts of oral cavity, composed of salivary components like mucin, desquamated epithelial cells, debris & microorganisms, all embedded in extracellular gelatinous matrix [2]. The experimental model of gingivitis proposed by Loesch et al. concluded that the first sign of gingivitis occurs 10 days after plaque accumulation [3].

It has been suggested that mechanical and chemical plaque control measures are efficacious in prevention of occurrence of gingivitis and caries through reduction of plaque [4]. The most efficient method in mechanical plaque control is tooth brushing those results in significant decrease in plaque. Various studies conducted on teaching brushingin children, have reported the use of the right technique according to the age of the child. It has been reported that the horizontal scrub technique is the method of choice of brushing by the young children [5].

Many young children are probably introduced to oral hygiene practices by their parents. However effective plaque removal in young children depends on their learning sequences of coordinated muscular movement and their level of motor skill development [6]. It has been generally known that tooth brushing by young children under age of 10 years is inefficient [7]. This might be due to lack of motivation and poor manual dexterity at this age. Thus oral hygiene education should be taught to child according to development of child’s cognitive skills. Instructions should be given according to child’s readiness for tooth brushing and must also include proper training and regular reinforcement. Also it has been documented that oral hygiene instructions through conventional methods such as lectures have been successful in improvement of oral health yet the results of contemporary methods of education are to be confirmed [8].

This study was undertaken to assess the effectiveness of 3 methods of teaching tooth brushing in young children with mixed dentition: audio-visual aids, individual instructions to each child on cast and child as model along with the effect of reinforcement on the learning skills of the child.

The present study was a randomized clinical control trial, conducted in a private aided school. Sixty children between 7-9 years of agewere selected for the study. The study was approved by the Institutional Ethics Committee (IEC). Written consent from the parents of selected students along with permission from school authorities was taken for the conduction of the study in school children. The children were selected on the basis of the following criteria.

Children with special care needs: According to the method employed for teaching the brushing technique the selected children were divided into 3 groups (each group comprising of 20 children). Group I-audio-visual; Group II -individual instruction on cast; Group III-child as a model Table 1. Each group was further divided into sub groups, according to the reinforcement schedule, comprising of 10 childrenin each sub group. The first 10 children were under the reinforcer group and next in the non- reinforcer group Tooth brush and tooth paste were given to the children who had participated in the study.

The correct brushing technique was re- taught to the children of reinforcer group after 3 days of evaluation of initial plaque scores. After 1 week, again the plaque scores were evaluated to check for the oral hygiene status of the children, thus assessing the efficacy of the method taught for teaching brushing. 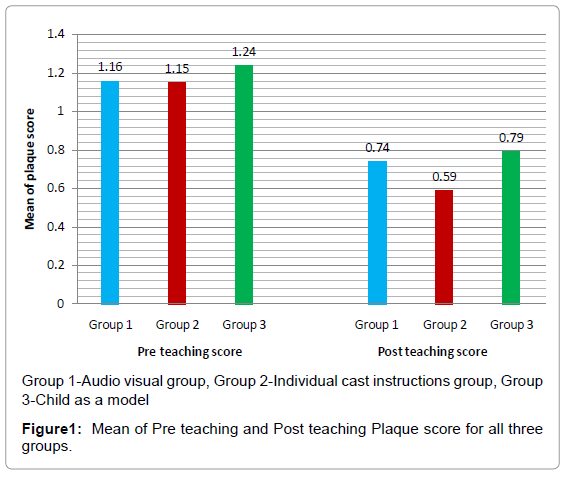 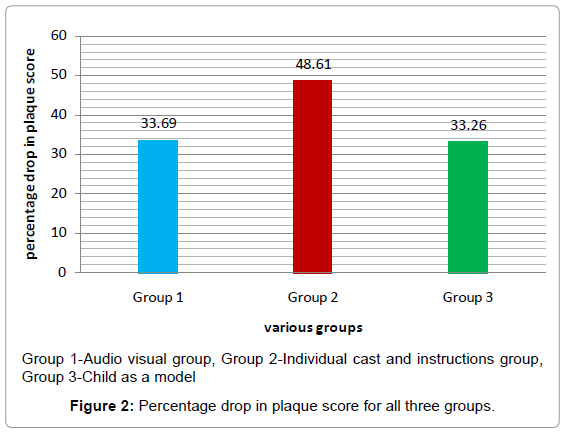 Figure 2: Percentage drop in plaque score for all three groups. 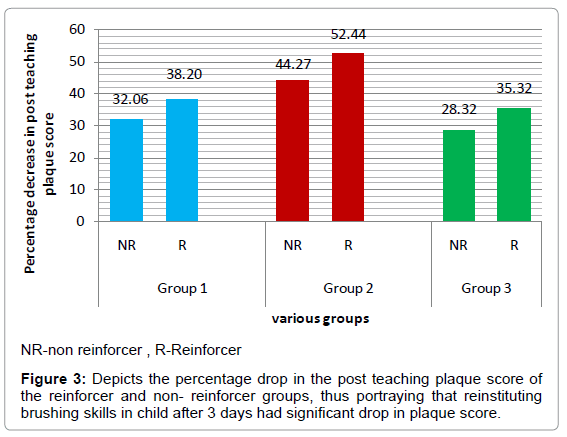 Figure 3: Depicts the percentage drop in the post teaching plaque score of the reinforcer and non- reinforcer groups, thus portraying that reinstituting brushing skills in child after 3 days had significant drop in plaque score.

For the evaluation of effect of reinforcement on the learning skills of the child, the three groups were sub divided into 2 groups, the reinforcer and non- reinforcer groups, wherein the brushing instructions were repeated to reinforce group after three days. The post teaching plaque scores were evaluated and a noticeable decrease in the plaque scores of the reinforcer group was observed than the non-reinforces group.

In the present study, Modified bass technique was the chosen brushing technique. Several clinical studies have reported bass technique to be an effective technique of tooth brushing. Gibson and Wade compared the effectiveness of Bass and Roll technique in plaque removal and have concluded that Bass method was superior in cleaning tooth adjacent to gingival tissue of facial and lingual aspect [10]. At 7-9 years of age the onset of the cognitive development of child helps him understand and perceive the given instructions and the required manual dexterity is also present at this younger age group. Unkel et al. [7] suggested that chronological age is an equitable predictor of tooth brushing ability and that manual tooth brushing skills are acquired after approximately four to five years, thus 7-9 years selected in the present study was appropriate age group to assess the outcome of teaching methodology [11,12]. According to study done by, Okada M13, teaching of brushing technique skills are important because brushing under supervision, inculcates effective brushing habits.

Results obtained from the study have illustrated that a significant relationship exists between the methods of oral hygiene instruction and reinforcement and the plaque index. Williford et al. reported that educational lectures result in highly significant improvements in oral health when applied in adolescents [13]. Doctor Podshadley and Miss Schweikle from the results of their study quoted, “Sorry folks, but your single annual lecture and demonstration of tooth brushing for children in the third and fourth grades are not effective in changing their performance, regardless of their choice of two techniques” [14]. Thus there lies a need of newer comprehensive methods for teaching brushing technique in children, wherein attention may be given to individual needs of each child.

Experienced guidance in tooth brushing from their mothers or a dentist or dental hygienist is important for better learning of brushing skills. This is well portrayed form the observations of the present study. However, it is evident that despite the reduction in plaque scores of all the three groups, it’s the Group II (individual cast instruction) that had maximum drop in score. Simmons et al. [15] concluded that teaching brushing skills at different ages was an effective measure to develop proper brushing skills. Since learning entirely depends on the cognitive skills and psychological development of child, better results were seen in Group II. On the other hand in Group III (child as a model), the model was chosen randomly amongst the selected children, who could probably not portray correct brushing technique. Frazao P did a study to assess if the bucco-lingual technique can increase the effectiveness of a school-based supervised toothbrushing program on preventing caries and concluded that modified program was effective among the boys [16]. It is licit to project a relevant effect in a larger period suggesting in a broader population substantial reduction of dental care needs. Although several studies have reported that audio-visual aids to be one of the most effective means for inculcation of a habit, yet in our study it was found to be less effective than individual cast instructions which might due to the reason that while teaching brushing skills through the cast, which represents the oral cavity model and individual attention was given to each child. Thus by learning through this way, children had better glimpse of entire procedure and could perceive the instructions in a better way.

Table 3: Mean of the post- teaching scores of various groups.

Table 4: Mean of the pre-teaching and post-teaching plaque scores of the reinforcer and non- reinforcer groups.

Based on the results of the present study it could be concluded that the individual cast instruction group was most effective method followed by audio visual group and child as a model group for teaching brushing methods. Individual cast instruction is a useful method because it is inexpensive; casts are easily available in private as well as institutional dental settings. It was further concluded that reinforcement of the desired behavior had a positive effect on learning of child and the inculcation of the desired habit.