Japan had around 20,000 suicides in the early 1990s, but the annual number of suicides increased abruptly to over 30,000 in 1998. Devising and implementing suicide prevention measures to reduce the number of suicides has become a societal issue that Japan should promptly address. Over the past few years, suicides in Japan have decreased, but the suicide rate in Japan remains high in comparison to the rest of the world. We believe that clearly identifying factors and issues related to suicide and implementing specific preventive measures to address those factors are crucial to preventing suicide. The current study examines the relationship between suicide and financial issues over a prolonged period. Specifically, it examines the annual suicide rate (per 100,000 populations) during 1980–2013 and the spring wage increase (%) at major companies in Japan during the same period. This study examines suicide rate and spring wage increase statistics in detail.

Financial hardships and financial difficulties can lead to mental exhaustion and stress. A key measure to preventing suicide due to financial reasons is providing mental health support to individuals facing financial problems. Suicide prevention measures should be coordinated by relevant bodies and the community. Such efforts in Japan and elsewhere around the world should be based on statistical analysis of the factors involved in suicide.

A recent report by the National Police Agency (Cabinet Office, 2015) indicated that Japan had around 21,000 to 24,000 annual suicides in the years 1990â€“1997, but that this figure abruptly increased to 32,863 in 1998. From 1998 to 2011, Japan continued to have 30,000 or more annual suicides, though this figure dropped to below 30,000 from 2012 onward. Over the past few years, the suicide rate in Japan has decreased, but Japan still has one of the worldâ€™s highest overall suicide rates and high suicide rates among both men and women (Cabinet Office, 2015). The context for the abrupt increase in suicides in Japan in 1998 was an increase in suicides among middle-aged males due to economic and life problems (Inoue et al., 2011; Ono, 2006). We previously reported that unemployment (Inoue et al., 2006), stock prices (Inoue, Fukunaga & Okazaki, 2012b), poverty rates (Inoue et al., in press), the average disposable income per household (Inoue et al., 2014), and the number of new housing starts (Inoue, Fukunaga,, Fujita & Okazaki, 2012a) are financial and lifestyle factors related or correlated to suicide in Japan. One study (Motohashi, Jung-Choi, Jun & Kawachi, 1991) described a period when the overall suicide rate in Japan was closely related to the unemployment rate and the labor force and a period when the divorce rate and tertiary industry had a major impact on the suicide rate. In another study, suicide mortality among males showed a positive association with working away from home (Otsu, Araki, Sakai, Yokoyama & Voorhees, 2004).

Foreign studies have described financial and lifestyle factors related to suicide trends (Kim, Jung-Choi, Jun & Kawachi, 2010; Inoue et al., 2010; Masedo-Gutierrez & Moreno-Kustner, 2015; Fountoulakis et al., 2015; Saurina Marzo & Saez, 2015; Stuckler et al., 2009). In South Korea, significantly higher suicide rate were related to a lower level of education and residence in rural and economically depressed areas (Kim et al., 2010). One study from South Korea found that the suicide rate there was related to the unemployment rate, but that increased rates of mining and industrial production and increased rates of money supply were not related to the suicide rate (Inoue et al., 2010). In a recent study, Masedo-Gutierrez and Moreno-Kustner (Masedo-Gutierrez & Moreno-Kustner, 2015) suggested that unemployment rates and suicide rates are too general as parameters. Another recent study (Fountoulakis et al., 2015) in Thessaloniki of Greece reported that suicide attempts were inversely correlated with unemployment and that completed suicides were correlated with unemployment. However, in a study of Catalonia of Spain, Saurina et al (Saurina, Marzo & Saez, 2015) found no clear relationship between higher suicide rates and an increase in unemployment. Stuckler et al. (Stuckler et al., 2009) reported that every US$10 per person increased investment in active labor market programs decreased the effect of unemployment on suicides by 0.038%.

Studies in Japan and overseas have not yielded consistent results, particularly with regard to financial factors related to suicide and financial measures that could serve as predictors of suicide trends. We agreed with a recent study arguing that it was important to study such relationships over several different periods (Fu et al., 2013). In other words, trends in suicide in relation to financial factors and financial measures need to be studied over longer periods of time for meaningful relationships to emerge. The spring wage increase is the average wage increase in Japan; the current study specifically examined the statistical relationship between suicide and the spring wage increase as a key financial factor over a period of 34 years.

This study examined Japan’s annual suicide number (people) and annual suicide rate (per 100,000 population) from 1980–2013, overall and by sex, based on Vital Statistics of the Ministry of Health, Labour and Welfare published by the Cabinet Office (Cabinet Office, 2015). 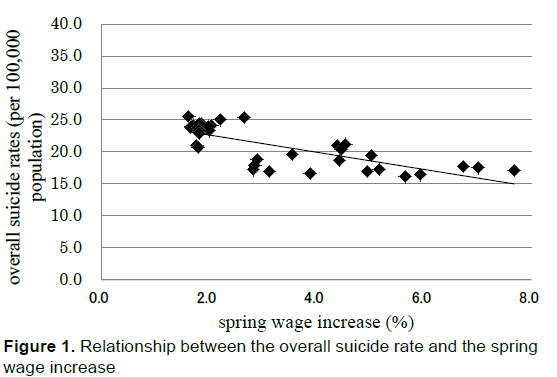 Figure 1: Relationship between the overall suicide rate and the spring wage increase 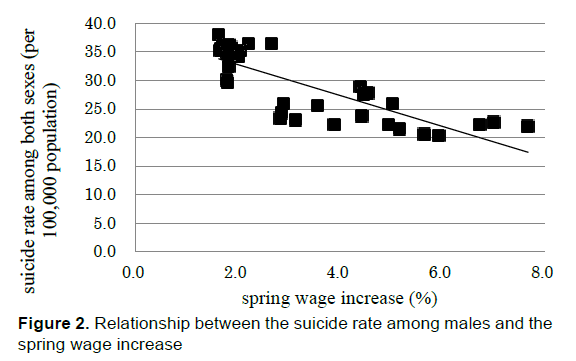 Figure 2: Relationship between the suicide rate among males and the spring wage increase 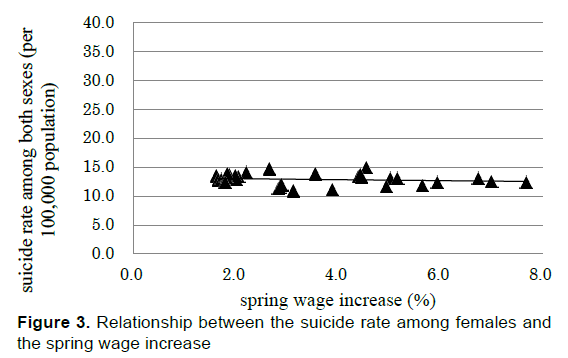 Figure 3: Relationship between the suicide rate among females and the spring wage increase

Several studies (Liu et al., 2013; Inoue et al., 2009; Yamasaki Sakai, & Shirakawa, 2005) in Japan have reported that suicide is more closely related to the effects of financial issues among males than among females. In my previous study (Inoue et al., 2012c), issues related to suicide among females and likely the underlying trends have a strong biological component. By contrast, issues related to suicide among males and likely underlying trends often involve financial factors as the underlying issue.

The current results have suggested a potential relationship between suicide and the spring wage increase. This relationship was shown to be particularly strong in males, and this tendency was similar to the trend in financial problems as the reason for the rapid increase in suicides in 1998 in Japan. Financial hardships and financial difficulties can lead to mental exhaustion and stress, and people who face financial problems need to receive mental health support to prevent suicide due to financial reasons (Glonti et al., 2015; Simou & Koutsogeorgou, 2014; Inoue & Tanii, 2008). In specific terms, coordinated responses by the medical establishment (clinical and social medicine), economics experts, administrative bodies, the legal system, colleagues in the same occupation, and the community must be made when necessary, and suicide prevention measures must be devised. In the future, we hope to continue to study suicide from various perspectives in order to provide data for the development of further effective suicide prevention measures.