An Isolated Retrovesical Hydatid Cyst in a Child: A Rare Case Presentation

Copyright: © 2017 Alders N. This is an open-access article distributed under the terms of the Creative Commons Attribution License, which permits unrestricted use, distribution, and reproduction in any medium, provided the original author and source are credited.

Visit for more related articles at Archives of Parasitology

Hydatid disease is a parasitic infection caused by Echinococcus granulosus. The most common locations of infection are the liver and lungs. This case discusses a rare isolated retrovesical hydatid cyst. The case-report describes a thirteen year old boy who presented with abdominal pain and dysuria. Ultrasound and magnetic resonance imaging demonstrated a multiloculair cyst, pathognomonic for a hydatid cyst. The retrovesical location caused a unilateral renal hydronephrosis. A renogram showed a right sided afunctional kidney due to this compression. Treatment with albendazol was started but the proposed surgery was refused. There are three possible routes of transmission: the first one is fissuring or rupture of a primary hepatic, splenic or mesenteric cyst with seeding of the content in the abdominal cavity. A second possibility is hematogenous or lymphatic dissemination. The third hypothesis, which we assume is the most probable in this case, is migration through the haemorrhoidal vessels of the rectal ampulla to achieve a retrovesical location.

A 13-year old boy presented at the pediatric department of the Antwerp University Hospital with 3 months abdominal pain and dysuria. The parents observed an intermittent voiding stream and noticed that he avoided drinking liquids. There were no gastro-intestinal complaints like diarrhoea or constipation or any other systemic manifestations. His past medical and surgical history were unremarkable. The boy was born in Bulgaria and moved to the Netherlands at the age of 6 years. Part of his family still live in rural Bulgaria whom the boy visits from time to time. The local diet includes raw vegetables grown in their own garden, which we assume is the source of infection in this case.

On clinical examination he appeared slender but in good general condition. His weight (34 kg) and height (115 cm) were symmetric on the growth curve (SD-1.7). His blood pressure was 110/70 mm Hg (90th percentile). Abdominal palpation was painful on the right side, and a smooth mass was palpable in the right lower quadrant. Ultrasound examination (Figure 1) and magnetic resonance imaging (MRI) (Figures 2-4) revealed a multilocular retrovesical cyst (5,3 x 4,8 x 4,6 cm) with dilatation of the right ureter and hydronephrosis of the right kidney due to compression. There were no lesions in the liver or in any other abdominal organs. The X-ray of the chest was completely normal. Blood examination showed a normal full blood count and no eosinophilia (420 x 10 ç/L). The liver tests were normal, but the kidney function was mildly decreased with a glomerular filtration rate of 77 ml/min/1.73 m2 (calculated using the Schwartz Formula adjusted for the method used in the laboratory) but still had a normal serum creatinine (0.77 mg/dl, normal 0.62–1.1). The presence of a multilocular cyst with mixed density due to daughter cysts is typical for an echinococcus cyst. According to classification of the World health organization (2003) this multiseptated rosette-like cyst is a type cystic echinococcosis (CE) E2. This is a fertile cyst [1]. The diagnosis was confirmed by serology (Echinococcus immunoglobulin G (IgG) enzyme-linked immunosorbent assay (ELISA) 24 U/ml, negative <10 U/ml). A renogram with Technetium-99 m (Figure 5) revealed an afunctional right kidney. Treatment with albendazol, 10-15 mg/kg/day in 2 doses, was started. Since the cyst was a large fertile CE2 cyst causing hydronephrosis and an afunctional kidney, surgical removal of the echinococcus cyst [2] and the afunctional right kidney was proposed after 4 weeks of albendazol treatment. Unfortunately the surgical treatment was refused by the parents. They opted for a second opinion in Bulgaria and failed to show for their follow-up appointments. 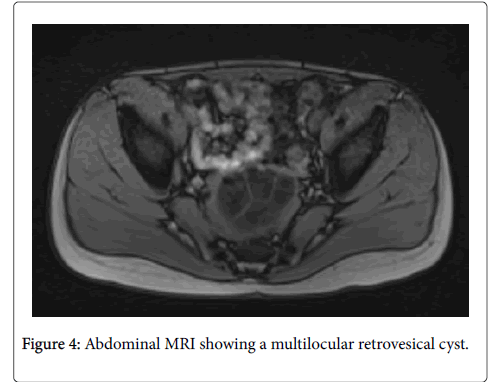 Echinococcus granulosus is present worldwide with high endemic areas concentrated in North East Africa, South America and Eurasia [4,5]. The average annual incidence in endemic areas ranges from <1 to 200 per 1,00,000 inhabitants [2]. In Bulgaria the annual incidence is 6.7 per 1,00,000 [6] which makes it the highest incidence among countries in the European Union (42.63% of all cases in 2006) [7]. Between 20% and 25% of the cases in Bulgaria are children and adolescents (0-19 year) [6]. The incidence of a retroperitoneal and retrovesical cyst is estimated at 1.1-2.25% [8,9] and they rarely occur in children [3,10]. We believe that this is the first report in the English literature of a child with a complete afunctional kidney caused by a retrovesical hydatid cyst.

In the life cycle of the Echinococcus granulosus dogs are the definitive hosts. Intermediate hosts are sheep, cattle, goats and pigs. Dogs are infected by ingesting organs of animals that contain hydatid cysts. Inside the dog the cyst can develop into an adult tapeworm which can produce larvae that are shed in the faeces and can contaminate the ground. Transmission to humans is mostly accidental by consumption of soil, water or food that is contaminated by faecal matter. Once the larvae are ingested they hatch and develop into slowly enlarging cysts in internal organs [3-5]. The most common location is the liver (59-75%) followed by the lungs (27%), kidneys (3%), bone (1-4%) and brain (1-2%) [11]. Isolated retroperitoneal and retrovesical locations of a hydatid cyst are very rare, even in endemic areas [8,10,12,13]. The classical theory of Dévè states that fissuring or rupture of a primary hepatic, splenic or mesenteric cyst would seed its contents in the abdominal cavity. The primary cyst may heal and disappear, leaving behind a scar that could be overlooked by any diagnostic modality [8,11,13]. Another theory proposed to explain an absent primary visceral lesion, and no evidence of peritoneal seeding, is haematogenous or lymphatic dissemination [8,11,13]. A third hypothesis, which we feel is the most likely in this case, is that the larva could remain in the rectal ampulla and migrate through the haemorrhoidal vessels to achieve a prerectal or retrovesical location [8]. This hypothesis has been mentioned in the literature before [9].

The growth rate of a cyst is about one centimeter per year [10]. These cysts can grow to enormous sizes and can occupy the entire pelvis. Symptoms are most commonly caused by compression, as was observed in our case [13,14]. The diagnosis is based on clinical findings, imaging techniques and serology. Ultrasound is useful as a first line investigation in evaluation of cysts in the abdomen. Computed tomography and MRI are indicated in subdiaphgramatic locations, disseminated disease, extra- abdominal location and presurgical evaluation [1,11]. Surgery is the most effective treatment. Depending on the type of cyst the World Health Organization advises different approaches. Surgery in combination with pre- and postoperative albendazol therapy to decrease the viability of the hydatid cyst and to prevent secondary hydatidosis is a useful regimen in our case [10,11].

Retrovesical hydatid cysts are very rare, even in endemic areas and especially in children. We presented the case of a 13-year old boy with an isolated retrovesical cyst and unilateral hydro-ureteronephrosis. This is the first case report which describes an afunctional kidney due to compression by the hydatid cyst in a child. The diagnosis is based on clinical findings, imaging techniques and serology. Surgery with pre and post-surgery albendazol is usually a successful treatment for a fertile cyst. Contrary to the classical theory of Dévè or the haematogenous or lymphatic dissemination theory, we hypothesise that the larva in this case remained in the rectal ampulla and migrated through the haemorrhoidal vessels to achieve a prerectal or retrovesical location.