Department of Operative and Prosthodontics, School of Dentistry, University of Buenos Aires, Argentina

Copyright: © 2013 Robledo JG. This is an open-access article distributed under the terms of the Creative Commons Attribution License, which permits unrestricted use, distribution, and reproduction in any medium, provided the original author and source are credited.

Clinical Endodontics is defined as the prevention and/or elimination of apical periodontitis [1-3]. Epidemiological studies have also shown that post treatment diseases is very common. The high rate of apical injuries is probably caused by deficient root canal treatments. Among these problems we can include: residual infection in inaccessible areas in the apex [4,5]; intraradicular infection [6]; extrusion of dentin remains with prescense of bacteria in dentinal tubules [7]; poor endodontic practices with or without altering the morphology of the root [8-10] canal and root vertical fractures [11-13]. Insufficient treatment of the root canal can be treated without surgery, while other problems may require surgery. Apical surgery offers immediate access to the root apex. The pathology is removed by curettage and section of the apex with frequent infections contained in the ramifications of the canals [5,14]. A full healing of the apical area is possible after the endodontic treatment. However, it has been observed that in some cases the swelling persists (Figure 1). 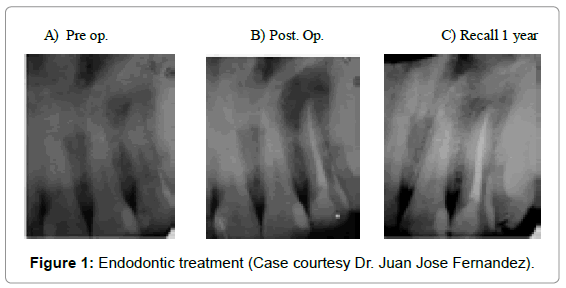 It is known that when carrying out the cleaning and disinfection of the canal, some biofilms can remain; these have been classified as different types of organized microorganisms included in a matrix [5]. These biofilms were the most common cause of persistence of the swelling and apical periodontitis [15]. They were also mentioned as inducers of chronic canal disease [5]. It is probable that tose bacteria are prsent in dentinal walls [5,16].

Procedures to carry out the root canal treatment, including root access, instrumentation, irrigation, intracanal medication and sealing of the canal are are carried out in an attempt to eradicate the infection from the canal system and eliminate spaces to avoid reinfection.

In infected root canals, the interior dentinal layer, next to the pulp, contains a great number of microorganisms [17,18].

Likewise, in some cases the bacteria have penetrated deeply into dentinal tubules, so much that they cannot be removed mechanically [19-21]. Clearly, there is no technique available capable of removing the entire infected internal dentin layer in a root canal; therefore, the bacteria remain in dentinal tubules after the instrumentation [21].

Since current procedures cannot remove the bacteria, the sealing of the canal can provide two types of solutions:

Most ink penetration tests, have found colorant at least 1 mm from the foramen [22] indicating that there are spaces between the apical filling and the dentinal wall.

It has been proven that these empty spaces allow the movement of bacteria along the sealing of the canal [23-25].

The purpose of this surgery is to clean and seal all communication of the root canal near the apex. Indications for apical surgery usually include cases in which canal obstructions do not allow the checking (retreatment) or those in which it would not be advisable to do so (Figure 2). The conservation of the natural dental piece is still the main goal. For this, we should evaluate, among other things, the possibility of restoration and return of the function of the dental piece.

It has been demonstrated that after an effective endodontic surgery, 97% of cases show signs of full recovery in the x-rays within 1 year. Some injuries have healed after a 7 month period [14].

Situations in which we would chose the surgical treatment:

--Canals which cannot be treated due to their anatomical complexity.

--Symptomatic tooth or evident injuries due to the lack of previous treatment.

--Failure in previous endodontic treatment atempts (revisions). Fractured instruments which block the light in the canal, making the access to the root apex impossible.

--Extrusion beyond apical limits of any sealing material.

--Long anchored bolts which would be difficult to remove to access the apical area.

Aplical periodontitis may not be detected by x-rays and may persist after many treatments. The firs option to eliminate this pathology is by means of pulp therapy, when this is not enough to solve the problem, endodontic surgery is chosen to solve the situation in order to eliminate the disease.