Objectives: The aim of the study was to monitor joint inflammation and destruction in rheumatoid arthritis (RA) patients receiving tocilizumab therapy using MRI and compare MRI findings with clinical, biological and radiographic data.

Methods: Inclusion criteria were patients aged between 18 and 65 years, fulfilling American College of Rheumatology 1987 criteria for RA. All patients had methotrexate inadequate response with no prior biologic exposure. All patients were evaluated clinically including disease activity score 28 (DAS28) and by low field dedicated MRI (dominant hand and wrist) at initiation of treatment with anti-IL 6 receptor antibody agents and after 6 months. The MRI images were scored using the Outcome Measures in Rheumatology Clinical Trials RAMRI score (OMERACT RAMRIS).

Results: Among 22 patients with RA included in the study; 19 were female. The mean age was 42years ±13.7. Tree patients were excluded from the study before 24 weeks because of serious side effects. The study population exhibited significant decreases in all measures of disease activity at 24 weeks. At 24 weeks, the median RAMRIS synovitis (p<0.0001) and bone edema (p=0.04) scores were significantly reduced while RAMRIS bone erosion score was unchanged. The baseline RAMRIS synovitis score was strongly correlated with delta RAMRIS edema at 24 weeks (r= - 0.46; p=0.04).

Conclusion: This study suggests a significant reduction in MRI pre-erosive lesions (synovitis and osteitis) using Tocilizumab in patients with RA with inadequate response to DMARDS. Prospective studies with long term follow-up and imaging as an outcome measure are needed.

Optimum management of rheumatoid arthritis (RA) requires early diagnosis and timely introduction of agents that reduces inflammation and consequently inhibits structural damage [1]. Indeed, the opportunity to induce remission/low disease activity in Rheumatoid Arthritis (RA) patients has been achieved in recent years by the adoption of more sensitive diagnostic methods; particularly Magnetic Resonance Imaging (MRI), and ultrasonography and early aggressive treatments. Tocilizumab (TCZ), a humanized monoclonal antibody that binds to both forms of the interleukin-6 receptor, showed clinical and structural efficacy in patients with RA [2-5]. The RA Disease Activity Score in 28 Joints (DAS28) is used to evaluate the response to TCZ. Indeed, the DAS28 is an excellent tool for assessing disease activity in RA. However and particularly during treatment with TCZ, CRP and DAS28 decrease very fast and very early and seem to overestimate the remission. Hence, it should be necessary to associate these tools to imaging (US or MRI) [6]. Magnetic resonance imaging (MRI) is more sensitive for the detection of both inflammatory (synovitis) and structural (erosive) joint changes than clinical examination and radiography. While conventional radiographs remain the standard reference methods for assessing destructive skeletal changes in patients with RA, radiographs are inherently limited by the lack of ability to assess pre-erosive changes that precede damage to the osseous component of the joint, a stage of disease that had been thought to be irreversible [7]. In addition to being much more sensitive in detecting joint erosions, MRI can also detect pre-erosive lesions (synovitis and osteitis) [8-11]. The areas of bone that appear as bone oedema or osteitis on MRI have been shown to be heavily infiltrated by inflammatory cells including osteoclasts [12], and MRI-detected synovitis and osteitis have been shown to increase the risk of developing new erosions over time as detected by either MRI or radiograph [13-20]. Detection and treatment of pre-erosive lesion can therefore significantly alter the course of RA.

Thus, MRI offers improved opportunities for investigating the course of joint inflammation and destruction during new therapeutic approaches, as in this case TCZ. Quantitative analysis in MRI has advantages over semi quantitative analysis in measuring the response to therapeutic agents, as can reflect a change in inflammatory activity more sensitively [6,21]. The Outcomes Measures in Rheumatoid Arthritis clinical trials (OMERACT) has developed the RAMRIS (RA MRI scoring system) to measure therapeutic effects in clinical studies in particular with biologic agents. The RAMRIS consists of semi quantitative assessment of bone erosion, bone marrow edema and synovitis and is sensitive to change [19,20].

The aim of the study was to monitor joint inflammation and destruction in rheumatoid arthritis (RA) patients receiving tocilizumab therapy using MRI and compare MRI findings with clinical, biological and radiographic data.

Twenty two patients with RA (fulfilling American College of Rheumatology 1987 criteria for RA) at the department of Rheumatology Rabat-Sale university hospital enrolled in an open label, 24 weeks follow up study. All patients have had methotrexate inadequate response aged between 18 and 65 years with moderate to severely active disease defined as Disease Activity Score in 28 joints based on erythrocyte sedimentation rate (DAS28-ESR) at baseline and an inadequate response to a stable dose of MTX (=15 mg/week for =6 weeks). TCZ was administered for study purposes only and not for routine treatment. Exclusion criteria for the study, included pregnancy, severe comorbidities, prior use of any biologics and use of csDMARDs other than MTX 1 month (3 months for leflunomide) before the baseline visit. All patients who were eligible agreed to participate in the study. The use of corticoids and analgesic drugs was allowed at baseline and during the follow up. Among 22 patients with RA included in the study; 19 were female. The mean age was 42 years ±13.7; their mean disease duration was 7.9 ±5.2 years. All patients signed a separate informed consent for inclusion in this study. The study was approved by the local independent committee of Rabat and conducted according to the principles of the declaration of Helsinki.

Clinical assessment was performed for each patient by one of tree rheumatologists. All of whom were blinded to the imaging findings. Disease activity was assessed by DAS28 ESR. Functional disability was estimated by the Health Assessment questionnaire (HAQ).

Serum markers of inflammation, C reactive protein (CRP) and erythrocyte sedimentation rate were obtained at the same day as MRI. The anti-CCP and rheumatoid factor dosage were performed only at baseline.

All the MRI were scored for synovitis, bone edema and bone erosion as defined in the OMERACT MRI RA recommendations (Table 1). Synovitis: is assessed in three wrist regions (the distal radioulnar joint; the radiocarpal joint; the intercarpal and carpometacarpal joints) and in each MCP joint. The first carpometacarpal joint and the first MCP joint are not scored. The scale is 0-3. Score 0 is normal, and 1-3 (mild, moderate, severe) are by thirds of the presumed maximum volume of enhancing tissue in the synovial compartment. Bone erosions: each bone (wrists: carpal bones, distal radius, distal ulna, metacarpal bases; MCP joints: metacarpal heads, phalangeal bases) is scored separately. The scale is 0-10, based on the proportion of eroded bone compared to the ‘‘assessed bone volume’’, judged on all available images—0: no erosion; 1: 1-10% of bone eroded; 2; 11-20%, etc. Bone edema: each bone is scored separately (as for erosions). The scale is 0-3 based on the proportion of bone with oedema, as follows—0: no oedema; 1: 1-33% of bone edematous; 2: 34-66% of bone edematous; 3: 67-100% (Table 1). Sum scores of synovitis, erosion, and oedema can be calculated by summation of individual joint scores, as a total sum or separately in the evaluated wrist and second to fifth MCP joints, respectively. For synovitis, the possible range of sum scores of unilateral second to fifth MCP joints, wrist joint, and both are 0-12, 0-9, and 0-21, respectively. The corresponding values for bone erosion are 0-80, 0-150, and 0-230 and for bone edema 0-24, 0-45, and 0-69, respectively.

OMERACT RAMRIS was assessed by two rheumatologists with documented experience and high inter reader agreement. The assessors were blinded to clinical and radiographic findings.

Conventional x rays of both wrists and hands in anteroposterior projection were obtained at inclusion and 6 months. Radiological assessment were examined according to modified Sharp score of Van Der Heidje

Non parametric statistical methods were applied and description statistics (numbers, medians, ranges, and interquartile ranges were calculated. The Mann Whitney U test was used for pairwise group comparisons. The Wilcoxon matched pairs rank signed test was used to compare baseline values with data at 24 weeks. Correlations were calculated by means of the Spearman’s rank correlation test. P values <0.05 were considered significant. The statistical analyses were carried out with SPSS.

Clinical measures of disease activity at baseline and at follow up

Table 2 present baseline and follow up characteristics of the 22 patients. Three patients were excluded from the study before 24 weeks because of serious side effects (pulmonary embolism in one 1 case, acute hepatitis in one case, and heart failure in one case). The study population exhibited significant decreases in all measures of disease activity at 24 weeks. The dose of corticosteroids decreased progressively through the period of the study (p=0.005). Physical activity expressed by the HAQ score increased through the observation period (p<0.001).

MRI synovitis, bone edema and tenosynovitis at baseline and follow up 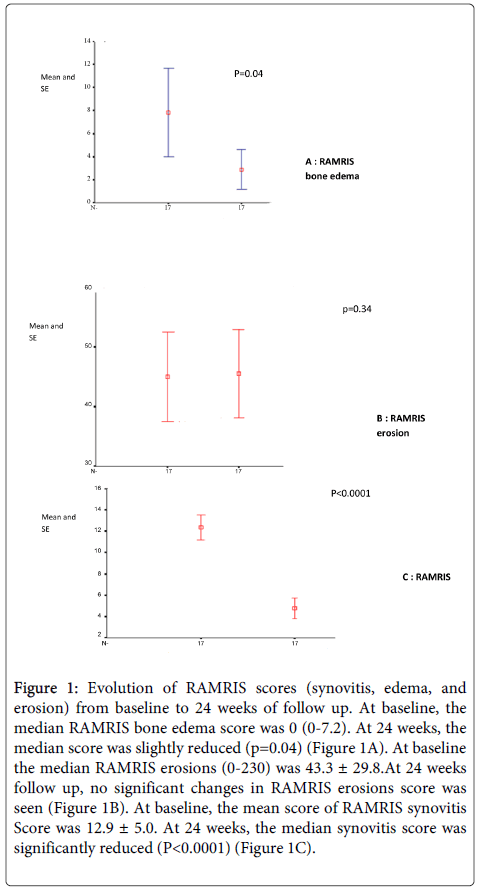 Table 3 resumes the correlations between RAMRIS score of erosion, edema, and synovitis and disease parameters relative to RA at baseline.

Table 3: Correlations between RAMRIS score of erosion, edema, and synovitis and disease parameters relative to RA at baseline.

Table 4: correlation between clinical and imaging variables at baseline and bone damage progression as assessed by delta RAMRIS bone edema

This study suggests a significant reduction in MRI pre-erosive lesions (synovitis and osteitis) using Tocilizumab in patients with RA with inadequate response to DMARDS, however in 6 months, while 46% of patients were in clinical remission, there was persistence of MRI inflammation. Indeed, modern imaging techniques are becoming increasingly important in assessing the course of arthritis and in permitting measurement of response to treatment as part of the follow up of patients. Estimation of synovial inflammatory activity by the MRI possibly with a significant role for low field imaging appears to be a promising method of detecting and monitoring inflammatory activity in patients with RA. Recently, EULAR had produced ten recommendations encompassing the role of imaging in making a diagnosis of RA, detecting inflammation and damage, predicting outcome and response to treatment, monitoring disease activity, progression and remission [40]. Prospective studies with long term follow-up and imaging as an outcome measure are needed.

The study was entirely funded by the University Med V-Souissi and Avicenne University Hospital of Rabat.

Copyright: © 2014 Rostom S, et al. This is an open-access article distributed under the terms of the Creative Commons Attribution License, which permits unrestricted use, distribution, and reproduction in any medium, provided the original author and source are credited.