Copyright: © 2015 Dejan S, et al. This is an open-access article distributed under the terms of the Creative Commons Attribution License, which permits unrestricted use, distribution, and reproduction in any medium, provided the original author and source are credited.

Introduction: There are numerous radiographic scoring methods in Rheumathoid Arthritis (RA). The scoring method Sharp/van der Heijde (SHS) is considered “a gold standard” for the assessment of the disease progression in RA. It is reliable but complex scoring method, which is time consuming and is used by well trained readers. The simple erosion narrowing score (SENS) was derived from the SHS method as an easier, quicker and reliable method for joint lesions scoring.

Aim: The aim of the present work was to use and evaluate the SENS method, for the first time in Macedonia, in comparison with SHS, and to test the agreement between the readers for the two scoring methods, in a group of patients with established RA.

Materials and methods: Evaluation of the patients included collection of demographic and clinical data, physical examination and calculation of the 28-joint disease activity score, (DAS-28). Laboratory tests and bilateral radiographs of the hands, wrists and feet were done in each of the patients. The radiographs were scored in pairs by two independent readers: rheumatologist and experienced radiologist.

Results: The study group consisted of 54 RA patients. The mean age of the patients was 54.4 years. The average duration of the disease was 4.74 years with the mean DAS 28 score 5.0.The average radiography scores read by the rheumatologist and radiologist were 43.7 vs.38.4 with the total SENS and 70 vs. 72 for the total SHS method. The interobserver reliability, calculated by the intraclass correlation coefficient (ICC) was 0.77 for SENS and 0.88 for SHS score.

Conclusion: The performances of SENS method were good and the reading was very fast and easy. The agreement between the readers was higher for the more detailed SHS score.

Conventional radiography (CR) has long been the standard for detection of joint damage in established rheumatoid arthritis (RA) [1].

In addition to its role in the diagnosis of RA, the conventional radiography is used for monitoring the progression of the disease and the efficacy of treatment.

There are numerous radiographic scoring methods in RA. Some give a global assessment for the entire patient, whereas others assess individual joints [2].

The most commonly used scoring methods are those devised by Larsen, Sharp and Sharp/van der Heijde (SHS) [3-5].

In 1971, Sharp proposed a scoring method for the radiografies the radiographies of hands and wrists. A modification of this method which was done in 1985 is now considered the standard for the Sharp method. It provides separate scores for erosions (ER) and for joint space narrowing (JSN) and considers 17 areas for ER and 18 areas for JSN in the hands and wrists [4]. Ghenant modified the Sharp scoring method in 1998 and Kaye combined the methods described by Sharp and Genant [2].

In 1989 van der Heijde modified the method described by Sharp in 1985. This method is now called Sharp/van der Heijde scoring method (SHS) and is considered “a gold standard” for the assessment of the disease progression in RA. In addition to hands and wrists, it includes feet. SHS is a reference method used in majority of clinical trials and longitudinal observational studies. SHS collects information on ER and JSN and covers a sufficiently broad spectrum of joints to provide sensitivity to change in structural damage [5,6]

An important disadvantage of this scoring methods is the fact that SHS require significant training and that scoring according to this method is very time consuming, making SHS difficult for clinical trials and routine clinical practice [7]

Simple erosion narrowing score (SENS) assesses the same joints as the SHS method. It was derived from the SHS method in 1999, as an easier, quicker and quite reliable method for joint lesions scoring. In SENS, instead of grading, the number of joints with erosions and the number of joints with JSN are simply summed. SENS The measurement properties of SENS are good and comparable to SHS, which makes it suitable for use in clinical practice and in large clinical studies especially in the first few years of the disease [8].

The objective of the present work is to evaluate the SENS method, for the first time in Macedonia, in comparison with SHS in a group of patients with established RA, with a considerable variation in disease duration and severity. We also wanted to compare the agreement of SENS and SHS scores read by two readers, rheumatologist and an experienced radiologist.

The study was conducted in the Rheumatology Clinic Skopje It was a part of a bigger PhD study which evaluated 105 patients with RA and it was approved by the Ethical Committee of the Medical Faculty in Skopje.

The patients were randomly selected for participation in the study, after they were seen by clinical rheumatologist as an outpatients. They signed an informed consent for the collection and evaluation of clinical data in accordance with the ethical standards described in the Declaration of Helsinki.

Evaluation at the time of the recruitment included collection of demographic and clinical data, physical examination and calculation of the 28-joint Disease Activity Score, (DAS-28). Laboratory tests and bilateral radiographs of the hands, wrists and feet were done in each of the patients.

Radiographs were available for 54 patients, who fulfilled the 1987 American College of Rheumatology criteria for RA [9].

Standard rutine Radiographs of the hands, wrists and feet were made in postero-anterior view and they were separately, in random order, scored in pairs by the two independent readers: rheumatologist and experienced radiologist. The radiologist was unaware of the patient’s identity and the clinical activity of the disease. We used printable scoring sheets of the joints of the hands and feet. SENS score was read independently from the radiographs and it was not derived from the SHS score [5].

SENS assesses the same joints as SHS method. A joint is scored one [1] if it displays at least one erosion. In the same way, if there is any narrowing of the joint it is also scored one. The score for each joint can therefore range from 0-2. The maximal erosion score for each hand is 16 and for each foot 6 and the maximal JSN and joint subluxation/ luxation score is 15 for each hand and 6 for each foot. The total SENS score ranges from 0-86 [2].

We performed radiographic scoring of the hands, wrists and feet in 54 RA patients, 42 females (77.8%) and 12 males (22.2%). The mean age of the patients, the average duration of the disease and the mean disease activity score DAS-28 are presented in Table 1 and Figure 1 The mean DAS-28 score indicates moderate activity of the disease. The mean radiography scores read by the rheumatologist and radiologist are presented in Table 2 and Figure 2.

Table 2: The mean radiography scores of the hands, wrists and feet read by rheumatologist and radiologist. 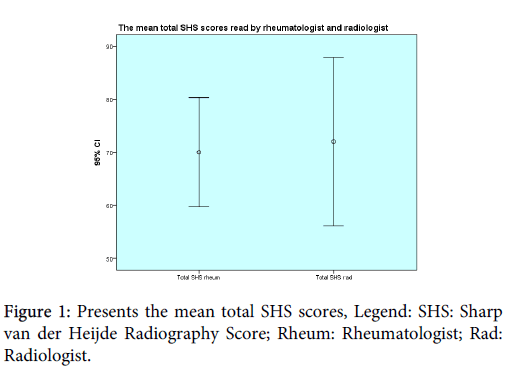 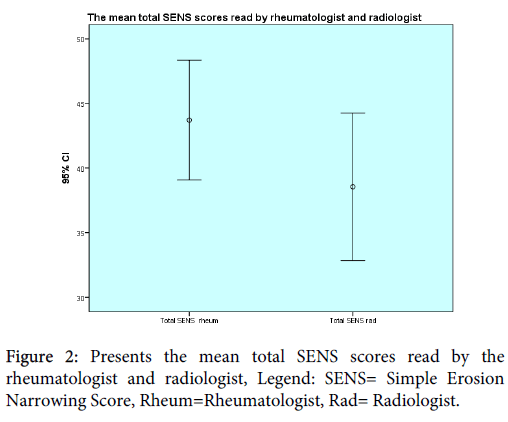 Table 4: Intraclass correlation coefficient between the readers (rheumatologist vs. radiologist).

The ICC demonstrated almost perfect inter reader agreement for the SHS scores and substantial agreement between the SENS, erosion and JSN scores. The ICC score was higher for SHS than for the SENS score. The ICC was lowest for the erosion score. Pearson’s coeficient of correlation (r) between the values of SENS and SHS scor, between this two scores, shows that there is moderate correlation between SENS and SHS score (r=0.30) (Figure 3). 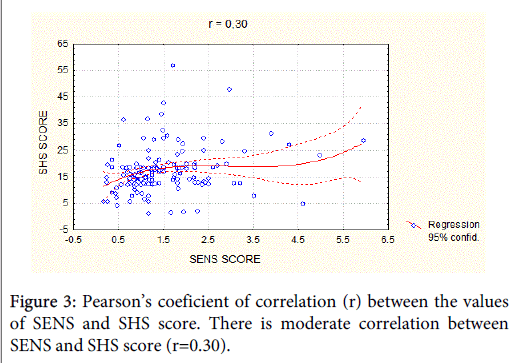 We performed a cross sectional clinical study in which we evaluated the SENS radiography scoring method (which was used for the first time in Macedonia), in comparison with SHS method, as a reference, in patients with established RA, in which radiographies of the hands, wrists and feet of the patients done.

Conventional radiography (CR) imaging seems somewhat oldfashioned in comparison with the other imaging modalities, such as magnetic resonance imaging and power-doppler ultrasound [6,8,10] but is chipies and easy to use imaging modality.

It has major deficiencies in imaging arthritis, mostly because of its poor sensitivity. CR detects only the osseous erosions and joint space narrowing which are the late irreversible sequelae of preceding synovitis, and it also provides limited information about the RA activity [10].

Despite it’s limitations, CR has several advantages in comparison with the other imaging methods: it is widely available, easy to generate, not expensive, and provides a permanent reproducible records for serial evaluation which can also be randomized and blinded for objective scoring. Because of that, CR remains the mainstay in the basic imaging of arthritis and the most commonly used method to assess joint damage and monitor disease progression in RA [1,6].

There are numerous radiography scoring methods which are used to measure and evaluate changes in RA. However, there is no universally accepted or preferred scoring method [2,10,11]. Which method should be used, depends on the researcher’s or clinician’s needs.

The SHS method is a sensitive scoring system for changes in structural damage, but it is complex, technically demanding, requires training and is time consuming. The experienced reader needs 25 minutes to read 7 radiographs with this method.

Scoring with the SENS method requires less training and is less time consuming (7 minutes). Because of that it is more likely to be applied in clinical practice [2].

It has shown reliability and sensitivity to change which are similar to SHS. A potential limitation of the SENS score is the so called “ceiling effect” which means that it detects only the first erosion or JSN per joint. SENS score can be read independently or derived from SHS [12].

To our knowledge there are few clinical studies which compared SENS and SHS scoring methods.

In the SENS validation study Guillemin at all and coworkers in 2005 compared 5 different scoring methods (Sharp, SHS, Larsen, Larsen- Rau and SENS) in 20 patients with early RA who had radiographies on the hands. In this study, both methods have high intraobserver and interobserver reliability [13].

The other studies which evaluated SENS and SHS methods were done in RA patients who were treated with anti-TNF therapy [14-16]. In this studies SENS method captured radiographic progression in RA reliably, compared with the more detailed SHS method, and was suitable for application in observational cohorts and clinical practice.

In the study of Dias et al., Comparationthe between the reader ICC was 0.81 for the SHS and 0.91 for the SENS status scores, respectively, which is similar with the results of our study. The other performances of the SENS score were good and SENS score was recommended for use in clinical practice [14]. The post hoc analysis in order to from the Best study, and that of Barnabe et al.,compared the SHS and SENS scores. in a cohort of patient treated with anti-TNF therapy [15,16] They found high probability of agreement between both of the methods. In the study of Barnabe et al., SENS score had good cross sectional and longitudinal interrater reliability but it was less sensitive to change. SENS score was recommended for use in observational studies but also for use in clinical practice.

The major limitation of our study is that we have not included the second reading because of which we only have radiography status scores.