Whistle sound is generally used for echolocation purposes, while the sound of the blast-beat and whistles play a major role in internal and inter-group communication. The purpose of this research is to know the power spectral patterns and fluctuations in sound based on frequency and Power Spectral Density (PSD) of the sounds produced by dolphins and observing the position of dolphins, Noisy Time Domain (NTD) and behavior using underwater camera, and also comparing between time and sound spectrum. Data recording was taken at the Safari Park of Cisarua Bogor in Indonesia, by taking data in show pool and show pool. The results showed that salinity before feeding time in the show pool with replication 1,2, and 3 has salinity value that is equal to 30%. Data at the show pool before feeding with replications 1,2, and 3 has a salinity of 29%. Power Spectral Density (PSD) of the whistle sound before feeding was different from one another, but it has the same frequency range. The highest intensity values is at sound whistle 3 before feeding time at the show pool with an intensity value of 28.03 dB/Hz with frequency interval of 14642-16000 Hz. F-test at the show pool before meals has heterogeneous value. Treat before meals at the show pool has a value of P < 0.001 and P < 0.001. Value Noisy Time Domain has differences with each other and has a lot of different sound patterns. In general, there are real differences are evidenced by F test on a range of time at each whistle on physiotherapy and swimming pool show in the time before meals. The position of dolphins in a pool show more dominant and often in the bottom of the pool, the position of the dolphins affects the frequency.

Currently little is known about the bottlenose dolphin sound has type referred to as yelping (burst), which is characteristized byc of spectral, temporal, and amplitude as a shrill sound pulse of type the sound of a click type very few researchers have explored. As for early description in literature, most of it is only worth qualitative, that reflects interpretation hearing subjective interpretation and classification hearing in humans [1]. The sound of a click generally used for echolocation, while the sound of a whistle yelping (burst) and playsed a major role in internal communication and across group [2]. Whistles that continues indefinitely, giving signals frequency, with various wide emissions of 800 Hz and 28.5 KHz often there are harmonic components harmonic [3]. Dolphin hearing to dolphins ranged from about 50-150 KHz, with somethe variation of additional among species [4]. Previous research about Bioacoustic Characteristic of Male Dolphins Bottle Nose (Tursiops aduncus) have frequency range of their clicks is at 14.221-15.100 Hz [5,6]. In true dolphins (Delphinidae), tonal sounds are typically referred to as whistles, and are emitted especially during social interactions that involve group cohesion, individual recognition, and recruitment during feeding activities [7] classified whistles of common bottlenose dolphins (Tursiops truncatus) into ‘‘signature whistles’’ (or contact calls) and ‘‘variant whistles.’’ Signature whistles are stereotypic and individual-specific signals that are stable over time and are used for group cohesion.

Bioacoustus is the knowledge that combines biological and acoustics which usually refer to research on the production of sound, dispersion through an elastic medium, and acceptance in animals, including humans [8]. But because the science of acoustics is growing rapidly for dolphins, researchers formerly had been exercising records and analysis vocalization [9]. Associating vocalizations with the underwater behavior of dolphins has proved difficult due to the lack of underwater access to animals and life history, sex, and relationship information. Limited reports on the behavior and vocalizations of Atlantic spotted dolphins have been made [10]. This paper describes analyse and discriminate characteristics whistle sound of male dolphins bottle nose (Tursiops aduncus) in the show pool at safari park Indonesia, Cisarua Bogor.

Tools and material used in the research methodology include: Hidrofon SQ3 (instrument passive acoustic), a thermometer hg to measure the temperature of water;refractometer for measuring water salinity dolphin EAR 100 hydrophones with serial number DE989505, camera underwater gopro hero 3+ serves to record the movement of dolphins visually while in the pool.

r spectral density (PSD) definition as the magnitude of the power per intervals frequency interval, in the form of mathematics.

Calculation psd in matlab uses the Welch method welch [11], namely looking for DFT (Based on accounts with FFT algorithms), then squaring the value of the magnitude.

Sound consists of particle motions that create a pressure wave propagating away from the sound source at a sound speed determined by the properties of the medium. A sound field is therefore made up by a particle velocity component (v) and a pressure component (p), and their product defines the acoustic intensity (I):

Usually, we express the sound intensity in decibel units:

Whistles were extracted from underwater video and sound recordings made between Mei 2015 with video cameras (Gopro Hero 3+) and a SQR 3 hydrophone, flat to 22 kHz with a –192 dB re 1 μPa. Whistles were assigned to specific individuals when a dolphin was alone in the camera/hydrophone vicinity, in sole proximity (<1m) of the camera/hydrophone, or showed simultaneous bubble emissions correlated with a whistle. Although amplitude can be variable in dolphin vocalizations, individuals more than 5m away from the recording equipment never emitted whistles as loud as dolphins within 1m. If a group of dolphins was present, intensity of the whistle was only used to determine the whistling individual when one dolphin was close to the hydrophone (<1m) and the rest of the group was further away (≥5m). Some previous studies have relied on only bubble streams to identify the vocalizing individuals [12-14]. However, our unique underwater viewing allowed us to note not only bubble streams, but also the directional orientation and proximity of individuals to the recording equipment and the lack of other dolphins at the safari park, Cisarua Bogor in Indonesia. Whistles were digitized from audio recordings using Raven Pro 1.5 software (Cornell University, Ithaca, NY, USA) at 44.1 kHz sampling rate (Whistle 1, 2, 3, and 4). Data Analysis with Test F, All statistical tests was run with SPSS 14.0 software and Noisy Time Domain were run with Matlab R 2008b.

Power Spectral Density (PSD) function to equalize the number of rows and columns of data matrix m-file of the results of the voice recording process (Figure 1). Power spectral density is a useful concept to determine the optimum frequency band of the signal transmission system. PSD is a variation of power (energy) as a function of frequency spectrum in the form of density estimated using FFT, PSD method is one of the modern spectral estimation technique proposed during this decade [15]. Figure 2 obtained that there are four whistle, the value of Power Spectral Density (PSD), which is found in the highest with 28.03 dB/Hz are shown in green color on a whistle sound three at a time before eating pools show (indicated by black circles). The highest intensity values at an interval of 14642 Hz frequency-16000, while the lowest value that is currently on a whistle 4 with a frequency of 9300 Hz with a value of Power Spectral Density (PSD) 21.97 dB/Hz is indicated by black lines. By looking at the pattern of spectral, whistle 3 has a sound frequency in the range of 14642-16000 Hz which is the highest compared to the intensity of the sound 1, 2, and 4. The peak whistle sound are at 1 and 4, the sound of the whistle 1 and 4 has a frequency range of peaks sound 14100-17000 Hz in frequency. Waveform whistle sound of dolphin, and Power Sepctral Density (PSD) showed in Figures 1-6. 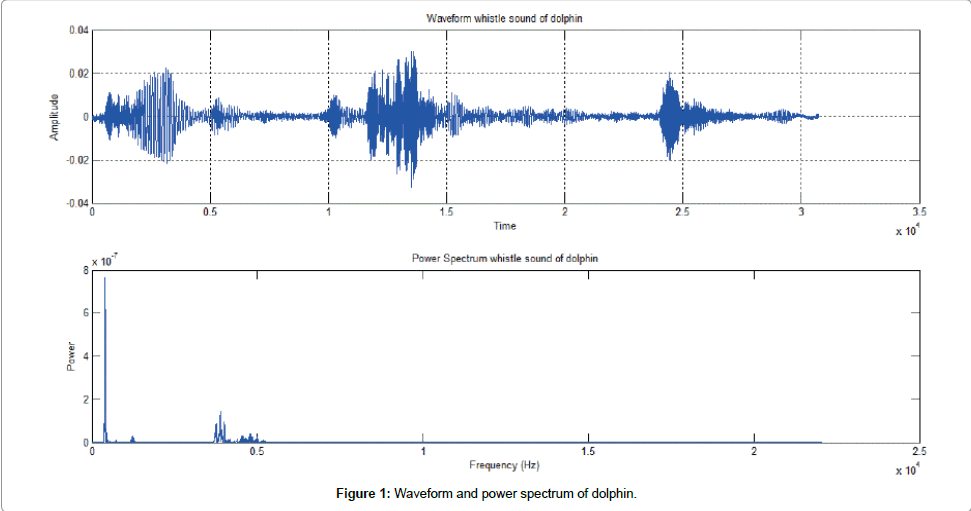 Figures 3-6 have the highest peak value which is located at 2 and whistles whistle sound 3 with a noisy value of 6.2 at 370 and 600 ms contained in the pattern ke-3 and the pattern of all five whistle sound. Results Noisy time domain has the same relationship with the original spectrum produced (Figures 4 and 5). Noisy lowest value in this is equal to -7.8 is at whistle sound 4 with time 620 ms on the 5th pattern (Figures 7-10).

Male dolphin bottle nose (Tursiop aduncus) are maintained in an physiotherapy and show, Safari Park Indonesia Cisarua, Bogor has a Power Spectral Density (PSD), value Noisy Time Domain have differences with each other and have a lot of different sound patterns. In general, there are real differences are evidenced by F test on a range of time at each whistle on physiotherapy and swimming pool show in the time before meals. The position of dolphins in a pool show more dominant and often in the bottom of the pool, the position of the dolphins affects the frequency.

I express my sincere thanks to the referees for their valuable suggestions to improve the paper in present form. The authors are grateful to safari parks which already allow authors to collect data during the research. The authors also thanks to lecturers Dr. Ir S Pujiyati, Dr. Ir Totok Hestirianoto and my research associates are Pratiwi Dwi Wulandari BSc in Department Marine Science and Technology, Bogor Agricultural University.