Signals are important in communication systems in everyday life, signal processing, and electrical engineering is a function that "convey something of information or insight into actions and behaviors or attributes of some phenomena" [1] (Figure 1).

In parts of the physical world, the results indicate the quantity of variation in the form of time or variations in the shape of space, and the potential of the signal that might provide information about a physical system status, or leave a message for each observer observer [1,2].

In acoustics science, spectrogram is the frequency spectrum of sound was be representation in visual as a function of time or another the variable [3]. Function of the spectrum analyzer is an passive acoustic instrument which can be used to converting the sound wave from the source of the note of musical into visual display of the constituental frequency [4]. Acoustic spectrogram was be generated by the analyzer of spectrum provides in acoustic signature sound from the source by passive acoustic intrumental. In addition fundamental frequency and its signature signal to revealing, the spectrogram is also useful for temporal attack analysis, broken, defended, and deleting of the signature signal note [5]. Sound source of a signal can have many different intensity and frequencies mixed. A siganture sounds is characterized by its spectrum of harmonic. In environment sound that we refer to as noise includes many different frequencies, intensity and sound press level (SPL). When the signal of sound contains a mixed of all audible from frequencies, distributed in equally over spectrum of audio, it is called to represented of white noise [3].

They can be manufactured as a single signal, or berhubngan or interrupted with a multi-looped form and they are often also produced in a fight which contains a repetition of the type of whistle same signature [9]. Signature whistles (Tursiops aduncus ) we have documented in captivity (the safari park, Indonesia) and free from 2 animals [10,11]. However, with the exception of marine mammals dolphins (Tursiops sp) Exist in the area of Shark Bay, in Australia [12], little attention has been given to the species, whether using a signature whistle. In addition, learning about the production of the results of vocalization, the process by which a whistle signature species that thrive in T. truncatus [7,13], and they must be assured and demonstrated in Specific species of other marine mammals [14]. Here we study the signal and spectrum analysis of the signature whistles of dolphins (Tursiops aduncus ) and Power Spectral Density (PSD) Yule- Walker AR and Welch Power Spectrum Meeting of signature whistle in the safari park, Cisarua, Bogor, Indonesia.

Data were collected in captivity, Indonesia on May 2015. Passive acoustic instruments for the retrieval of data collected using this type SQ3 hydrophone with built-in preamplifier, sensivity than 165 dB return V / μPa, and that the frequency response of 5 Hz - 35 kHz (±3 dB). SQ 3 recorder with software Wavelab 6 Software, and store data with a form that is WAV files with 16-bit. All acoustic wave file, aural, and spectrograms checked using software Wavelab 6 and Raven Pro software (version 1.5; Cornell Laboratory of Ornithology, NY). It can be used as a connector in combination with Hanning window function, temporal network within 0.7s with an overlap of 50% from 100%, and 22 kHz frequency resolution grid with the size of the window and the Fast Fourier Transform (FFT) size both in 2048 (depending on the level samples of sound files of dolphins diperole), produces filter 3-dB bandwidth of 22 kHz. During the recording process by using a hydrophone in the treatment of swimming events at the safari park with a pool depth of 0.5 m below the water surface. In the event the pool there are two dolphins are used as research objects. Number two dolphins have the same size, without a name or designation given.

Dolphins bottle has a length of 2.6 meters, weighs 232 kg, and the age of 14 years (dolphins are classified as adults). The treatments were given in this study is a before and after meals with dolphins object 2 bottles. Figure one set of passive acoustics (Figures 3 and 4) and Sketch in research can be seen in Figure 4. 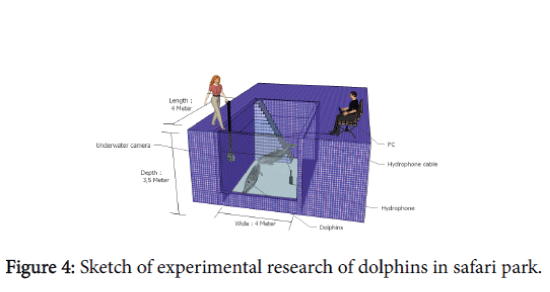 Figure 4: Sketch of experimental research of dolphins in safari park.

In decibel, the equation is:

Welch method will result in increased an estimation method consists of four steps (Welch 1967). Periodogram method used to determine the power density of the frequency components in the signal based on Fourier transform. Welch method of estimating the power spectral density with an average modified periodogram. With periodogram modifications are:

where f = fs is the frequency variable normalized to have a unit of cycles per sample. The scale factor Ts adjust the amount of time discrete signal spectrum to be the same as the analog signal spectrum. M is the length of the signal x (n). Windowing function represented by the sample w (n), and C is a normalization constant defined as:

Finally, the estimation of the power density spectrum is:

Whistles are assigned to specific individuals when dolphins were alone near the hydrophone (passive acoustic instrument), near the sole (<0.5 m) from the hydrophone, or the bubble emissions showed that simultaneous and correlated with a whistle (Figure 5). Although the results in the form of variable amplitude in the vocalizations of dolphins, individuals are more than 3 m of passive acoustic equipment itself to make the recording never emitted a whistle as loudly as a dolphin in 0.5 m. If a group of dolphins came to the hydrophones, the intensity of the whistle is used only to determine the individual whistle when one of the dolphins was close to the position of the hydrophone (<0.5 m) and the rest of the group was further (≥3 m). Filters used to design the data whistle Band Pass Filter (BPF), Band Pass Filter design can be seen in Figure 5.

This study has demonstrated signal and spectrum analysis the whistle of bottle nose dolphins (Tursiops aduncus ), clustering spectrum and power spectral density Yule-Walker AR and Welch Power Spectral Density using signature whistles (Figure 6). While this paper aims to describe whistles sound recorded in captivity, Indonesia, and the bottlenose dolphins have traine for behaviour in show pool. The pattern seen in the sound has six patterns of sound that is at 0-700 ms with frequency 0-2200 Hz. 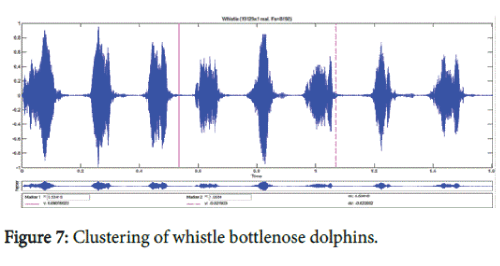 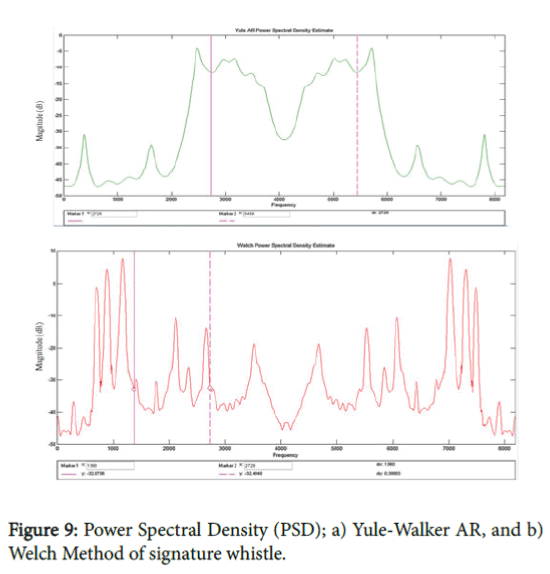