Copyright: © 2016 Pereira BAAX, et al. This is an open-access article distributed under the terms of the Creative Commons Attribution License, which permits unrestricted use, distribution, and reproduction in any medium, provided the original author and source are credited.

Objective: To evaluate the responsiveness and validity of the Brazilian version of CRAFFT as a screening drug test in adolescents.
Method: Descriptive and quantitative research, which assessed the applicability through a convenience sampling of technical school’s students (14-21 years). Kappa coefficient was applied to investigate the correspondence between CRAFFT and CEBRID questionnaires and and the ROC curve was performed to evaluate the psychometric properties of CRAFFT.
Results: 1882 students answered the CRAFFT/CESARE questionnaire. The minority of students (2.2%) had problems in comprehending the scale. CRAFFT/CESARE questionnaire’s specificity achieved 73.3%, and it’s sensitivity, 87.1%. The correlations between the questionnaires were considered good (Kappa: 0,461). Six hundred eighty-two (36.2%) of the 1882 adolescents scored positive for CRAFFT/CESARE. Visual inspection of the receiver operating characteristic curve presented the optimal cut point of 2 or more.
Conclusion: Our findings support the utility of the Brazilian version of CRAFFT/CESARE as a screening tool for use of psychoactive substances among Portuguese-speaking Brazilian adolescents. Its characteristics and psychometric properties makes it possible to use in the Brazilian sociocultural context.

The problematic about the use of psychoactive substances in adolescence concern all countries around the world. The risks associated with the use of substances involves motor vehicle accidents, non-intentional injuries, homicide, suicide [1], unplanned sexual activity, conduct disorders and depression [2].

The Brazilian’s Ministry of Health suggests that the health care professionals should be able to identify adolescents in use of substances, to check their limitations with managing and to refer to specialized treatment if necessary [5,6]. However, there is no quick and easy screening instrument to identify the adolescents in use of psychoactive substances in Brazil [5,6]. There are a few instruments validated in Brazil, however it’s necessary to pay for using them and/or had been training for use [6].

The instrument named CRAFFT (acronym from Car; Relax; Alone; Forget; Family/Friends; Trouble) attend these characteristics. It’s an instrument developed specifically for screening drug use amongst adolescents. CRAFFT test is easy to use and simple to score it. In addition, it lacks costs and any type of training in advance. CRAFFT has already been translated and validated to many countries [7-12] and has been considered as being of easy use and of good psychometric capacity. Many studies showed that CRAFFT can be used for this propose and it had been validated against length screening tools, like POSIT, and structured diagnostic interview as well [13].

The purposes of this research are to show the Brazilian Portuguese version of CRAFFT questionnaire for screening the use of psychoactive substance between adolescents and to measure its validity and responsiveness.

This is a descriptive, quantitative and cross-cut study that has analyzed a version in Portuguese proposed by the authors [14] of the CRAFFT scale, here named CRAFFT/CESARE, and that has gauged its applicability in adolescents.

The population was determined through a convenience sampling of public technical school’s students (14-21 years) from upstate São Paulo in 2011, who had their parents’ permission through the IC signing and who read, agreed with, and signed the IC.

The instruments used were the CRAFFT [13]/CESARE [14] questionnaire and the questionnaire of the VI National Brazilian Survey [3].

The Brazilian version of CRAFFT, named CESARE, was obtained from a consensus between the author of the instrument and the authors of this paper, who adapted the questions to the Brazilian context, and used the final version to run the survey [14].

The questionnaire from the VI National Brazilian Survey [3] is a closed questionnaire, self-filling, adapted from an instrument proposed by the WHO [15]. This instrument was employed in a subsample (28%) randomly chosen among participating students, immediately following the use of the CRAFFT/CESARE questionnaire.

We evaluated the students problems in comprehending the scale; the validity of the CRAFFT/CESARE comparing a subsample that also ansewerd another questionnaire (CEBRID); and the percentage of students who scored 2 or higher for CRAFFT/CESARE. Kappa coefficient was applied to investigate the correspondence between CRAFFT/CESARE and CEBRID questionnaire and and the receiver operating characteristic curve was performed to assess the psychometric differences within different cutoffs.

The Research Ethics Committee of FCM-UNICAMP approved the study protocol (no. 811/2011).

One thousand and eight hundred and eighty-two students answered the CRAFFT/CESARE questionnaire. The average age was 16.7 years old and 57.2% of students were male.

Only 2.2% of students mentioned to have had some difficulty in understanding the questionnaire.

The comparative instrument was positive for 21,4% of 543 students. 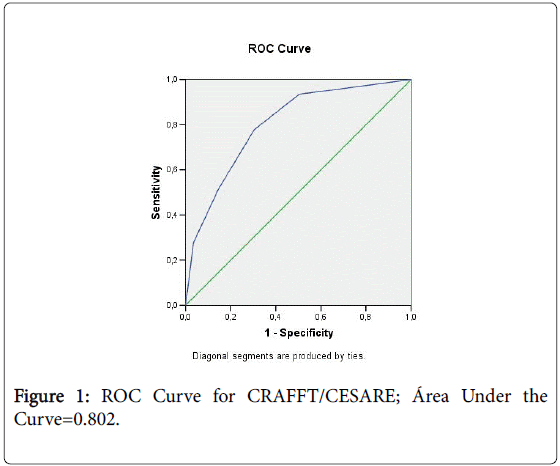 The visual analysis of the ROC Curve confirmed that the best cutoff was greater or equal to 2.

Using the cutoff established for the scale the CRAFFT/CESARE was positive for 36.2% of the students.

The current study corroborates with the use of the CRAFFT/ CESARE as a possible instrument for sorting the use of psychoactive substances by adolescents.

The questionnaire is short, with a simple rating, and can be selffilled or implemented by a professional from the primary health care. No pre-training is necessary [8].

The self-filling of the questionnaire allowed for an evaluation of the comprehensibility of the instrument, with a very low rate of students who indicated difficulty with the instrument.

The reliability found in this study was considered good, although slightly lower than the one found by Levy et al. (Kappa: 0.66-1.0) [16], probably due to the comparative instrument used in this research.

In the present study, the percentage of students with positive CRAFFT/CESARE was 36.2%. This indicates that more than a third of participants not only used alcohol and/or other psychoactive substances in the past year, but also experienced some kind of consequence as a result from such consumption, such as driving or riding a car with a driver under the influence of alcohol, and/or forgetting and/or recognizing relatives/friends that abused the substances and/or consumption to relax and/or getting in trouble. Other studies about validation and cultural adaptation of the CRAFFT scale that used the cutoff of two or more affirmative answers indicated many indexes of positive sorting among the adolescent population (14.8% [6] – 63.3% [10]) depending on the population studied (hospitalized adolescents [2], students [7], rural areas, youth in enlistment for military service [9]). In Germany the CRAFFT was positive in 63.3% of the participants [10], in Norway it was positive in 21.2% of the students [7].

The data presented in the current study is consistent with the national data for students in this age group. Results from the VI National Survey show that the consumption of alcohol in the year was mentioned by 42.4% of adolescents and 10.6% used other psychoactive substances, apart from alcohol and tobacco [3].

Some limitations deserve to be mentioned. The students participating in the research were students in technical, public schools, where there is a pre-selection, which can limit the extrapolation of the data to the general adolescent population. However, there is no reason to believe that the validity and of the scale should be changed according to each group studied, since the questionnaire was specifically designed to identify the risky adolescents in the services of first care, and has satisfactorily accomplished its role in this context [13].

The correlation between the CRAFFT/CESARE questions and those of the instrument used in the CEBRID survey allowed only one approach, a fact that might have influenced negatively in the degree of agreement between the scales.

Despite the limitations pointed out, the study indicates that the CRAFFT screening test adapted to Brazilian Portuguese, named CESARE, was adequately comprehended, has adequate psychometric proprieties and peculiarities that makes it possible to use in the Brazilian context. Its fast implementation (about 2 minutes) and the possibility of employing different arrangements [7,8] make it into a useful tool in the evaluation of the use of drugs in adolescents. Its use can contribute to the early detection and minimization of potential risks of the use of licit and illicit substances in this age group.