Copyright: © 2016 Barroco R, et al. This is an open-access article distributed under the terms of the Creative Commons Attribution License, which permits unrestricted use, distribution, and reproduction in any medium, provided the original author and source are credited.

Hemimelic epiphyseal dysplasia, also known as Trevor disease, is a rare, nonhereditary epiphyseal disease of unknown etiology that simulates chondromatosis in the synovial joints [1]. The most commonly involved sites are the distal femur, proximal tibia, talus, and navicular. The complaint is usually related to deformity and limited range of motion from the affected joint. The disease stops when skeletal maturity is completed; however, deformities will persist [2].

This case report is about a patient who came to our hospital in 2011, when he was 4 years old and complaining of progressive increase in right ankle volume with limited dorsiflexion of the right foot and difficulty in playing sports for the past year. A physical examination showed an equine (10°of restriction to achieve the neutral position), hard, and painless mass in the anterior region of the lateral ankle with a valgus deviation of 10° and mild claudication but without neurological change.

A radiography exam showed anterior and distal bone exostosis from the tibial epiphysis region to the upper cavity of the talus neck. Tomography and magnetic resonance imaging (MRI) helped us to evaluate the physeal plate that was merged into the lateral anterior region. The volume of the mass was also measured; its dimensions were 3.2 × 3.4 × 2.5 cm.

Treatment was started with physical therapy; however, after eight months of evolution, the patient’s symptoms had not improved, and the mass had increased (Figure 1). Thus, the exams were updated, finding that the exostosis had grown significantly to include the medial anterior region; moreover, there was medial remodeling of the fibular metaphysis and a valgus at the head of the talus (Figure 2). Figure 2: X-ray showing the bone mass anterior in the ankle.

Due to the failure of the conservative treatment, we chose surgery and resection of the bone exostosis for the next treatment. Through dual medial and anterolateral incisions, it was possible to resect the mass, and a plantigrade foot was achieved (Figures 3-5). Figure 4: Final aspect after excision of the bone block. 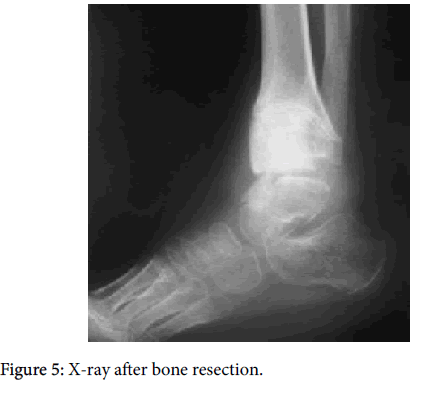 In the postoperative follow-up, we prescribed an orthopedic boot to reinforce the plantar arch and the use of night orthotics to keep the foot in a neutral position.

Currently, the patient is 8 years old and is in the third year of postoperative care. He has kept the gains achieved with surgical treatment without walking complaints and with minimum pain.

Radiographs show new growth of exostosis leading to anterior fusion between the tibia and the talus (Figure 6); in addition, there is a secondary inclination of the distal physis from anterior fusion and a subsequent growth in the posterior part. Figure 6: 3 years after the surgery. The bone has grown again resulting in fusion of epiphyses.

The clinical picture begins with a painless enlargement of the articular region affected. The evolution of the disease involves increased bone mass, limited range of motion, discrepancies between digits, muscular atrophy, and pain [6].

Diagnosis is made through X-rays showing an asymmetrical epiphyseal growth; biopsy is required only in atypical cases [8].

The radiograph shows a mass with foci of ossification around the epiphysis. In later stages, this mass may merge with the epiphysis [3].

CT helps to clarify the dimensions and shape of the bone mass; MRI helps to assess cartilage and soft tissue involvement [8].

Treatment is based on symptoms and is conservatively indicated in most cases. Surgery is indicated when the joint blockage leads the patient to have pain and functional impairment. Even after the removal of bone mass, recurrence is frequent, and further resections may be required [2-4].

A review of the literature found that excision results are usually good and that two-thirds obtained total gain of range of motion, however, 15% of patients develop early osteoarthritis, and 7.7% will require ankle arthrodesis in the future. No cases have progressed to malignancy [4].

The differential diagnosis is made with synovial chondromatosis, multiple epiphyseal dysplasia, and osteosarcoma. Histopathologically, it is not possible to distinguish Trevor’s disease from osteochondroma [1].

The goal of surgery is to remove joint incongruence, making the joint smooth and without impingement due to bone growth. Until skeletal maturity is achieved, further surgeries may be required [2,4,9].