Spandana B1 and Prakash DSRS2*

Copyright: © 2017 Spandana B, et al. This is an open-access article distributed under the terms of the Creative Commons Attribution License, which permits unrestricted use, distribution, and reproduction in any medium, provided the original author and source are credited.

Thioesterases play a central role in determining chain lengths of fatty acids in oil storage tissues and have been isolated from a number of plant sources. TEs can be classified into two evolutionarily related families, namely FatA and FatB, with distinct substrate selectivity. With the help of bioinformatics tools alignment was done among the selected thioesterase genes from related oilseed crops. Degenerate primers were designed by manual, codehop and webprimer methods for the conserved regions. Gradient PCR with designed primers showed amplification with manual and codehop primers in sesamum DNA. Amplified DNA is transformed and plasmids are sequenced. Sequences are searched for homology with BLAST. The homology at the amino acid level for thioesterase sequences was observed to be with Helianthus annuus than with the other oil seed crops compared.

Sesame (Sesamum indicum) is a highly-valued oilseed crop of Asia that produces seeds with 50% of dry weight oil, and which is commonly used in oriental cooking. The seed oil of sesame (Sesamum indicum) contains mainly four fatty acids viz., palmitic, stearic, oleic and linoleic acids. Sesame oil is unique in containing several lignan antioxidants as well as some tocopherols. Oleic and linoleic acids constitute around 85% of oil composition and their inheritance is controlled by single gene [1].

Major aims for molecular genetic improvement of plant oils have been to improve the total oil content of seeds, and to increase the content of specific target fatty acids in the oil to improve nutritional or functional properties and expand uses. In several instances, a functional genomics approach has been successfully used to identify the genes responsible for the production of specific fatty acids [2]. More recently, the development of genomics technology has opened doors for largescale approaches aiming to uncover and understand the regulatory factors that govern synthesis and accumulation of fatty acids in tissues. Plant acyl-acyl carrier protein (ACP) thioesterases are of biochemical interest because of their roles in fatty acid synthesis and their utilities in bioengineering of plant oil seeds [3]. Keeping in view the above facts the present study was undertaken to isolate and characterize the candidate thioesterase gene from the sesamum. The thioestarase gene plays viral role in fatty acid synthesis for the production of specific fatty acids from the Sesamum indicum. Thioestarases play an essential role in chain termination during de novo fatty acid synthesis and in the channeling carbon flux between the two lipid biosynthesis path ways in plants.

The plant species harboring the thioesterase which have already been reported were collected from the previous literature and from NCBI and EBI data banks. Thioesterase nucleotide sequences of B. juncea, G. hirsutum, H. anus, S. indicum, A. hypogeae, R. communis, G. max were taken from NCBI database and they are converted into protein sequences by http://www.expasy.ch/tools/dna.html. The consensus amino acid and nucleotide sequences of thioesterases (Fat A1) were selected by using the Protein Domain database, Pro Dom (http:// prodes. toulouse. inra. Fr /prodom /doc/ prodom.html), NCBI (http:// ncbi.nlm.nih.gov) and EBI (www.ebi.ac.uk) tools and thioesterase as the query. The most conserved region is identified by multiple sequence alignments by using Clustal W software. The similarity matrix the phylogenetic trees were produced using DNA Star (version 2004). Based on these conserved regions, gene-specific degenerate primers for thioesterases were designed manually and by using few software programmes like Web Primer and Codehop [4,5]. The consensus of these protein and DNA sequence alignments gave rise to 3 sets of primer pairs which are listed in Table 1. Degeneracy in primer sequence was also taken into consideration. Apart from the above mentioned, the universal site for most of the bioinformatics tools were also used in the present study (www.expasy.org). All the sequences were given for multiple sequence analysis by Clustal W. The aligned sequences were given to BLOCKMAKER (http://bioinformatics. weizmann.Ac.il/blocks/blockmkr/www/make_blocks.html) with each block at a time to BLOCKMAKER .The blocks obtained with the maximum similarity and minimum degeneracy was selected. These blocks were given to Codehop (http://bioinformatics.weizmann.ac.il/ blocks/codehop.html) for designing of primers. The primers thus designed were selected based on minimum degeneracy and length and percentage GC.

Three sets of gene specific degenerate primers (manual, Web primer, Codehop) synthesized by Biotech Desk, India Pvt. Ltd. were tested for PCR amplification with one sesame sample PCR reactions were carried out in a DNA thermocycler (Eppendorf, USA) with a heated lid. Each 20 μL reaction volume contained about 100 ng of template DNA, 1X PCR buffer (10 mM Tris-HCl pH 5.3, 50 mM KCl), 2 mM MgCl2 (Invitrogen, USA), 2 mM dNTP, (Sigma -Aldrich., USA), 5 pmol each of Forward and Reverse primer and 1U of Taq DNA polymerase (Stratagene, Germany) and programmed for an initial denaturation step of 5 min at 94°C, followed by 35 cycles of 1 min at 94°C, 1 min at 50°C, extension was carried out at 72°C for 1 min and a final extension at 72°C for 10 min and a hold temperature of 14°C at the end. Negative controls were also run without template DNA to avoid non-specific amplification.

PCR products were electrophoresed on 1.4% agarose gels, in 1X TAE Buffer at 50 V for 3 h and then stained with ethidium bromide (0.5 μg/uL). PCR reactions were repeated three times to ascertain the reproducibility of the reaction.

Transformation of ligated product was done in the same manner as described elsewhere. The plasmid isolation was done by Alkaline lysis method. The selected plasmids of amplification range (400 bp for thioesterase) after PCR was given for sequencing.

The primers are designed by manually, (by ta webprimer and codehop methods which are given in Table 1.

The sequences for characterization of Thioesterase gene are selected from the following edible oil yielding species Brassica rapa, Helianthus annuus, Ricinus communis and converted to amino acid sequences to identify the conserved regions which are given in Supplementary file1.

The primers are designed (including C terminal region as N terminal region has more gaps it is excluded) by manual, webprimer and codehop methods which are given in Table 2. 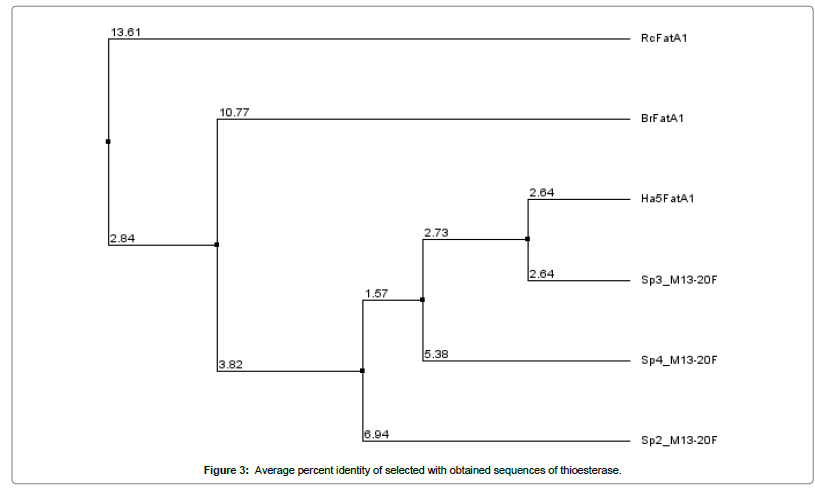 Lanes 1-11: S. indicum DNA amplified with Codehop designed primer using a gradient from 45-55°C with a 0.9°C raise at each lane.

Since the designed gene primers of thioestarase gene will amplify the DNA at 400 bp, that band is eluted from the gel, transformed and isolated plasmids from selected colonies were sequenced for further conformation.

Of the 10 PCR positive clones obtained 5 were sequenced. The sequences obtained were subjected to BLAST search.

Search results of Thioesterase in the NCBI for homologs

Four sequenced thioesterase sequences were submitted to the NCBI (National Centre for Biotechnology Information) website for BLAST-N (http://www. ncbi. nlm. nih. gov/BLAST/) [6]. The sequence results indicated that the thioesterase gene cloned from S. indicum had high homology at the nucleotide and amino acid level with those of A. thaliana, Mus musculus and B. napus (Figures: 2 and 3). 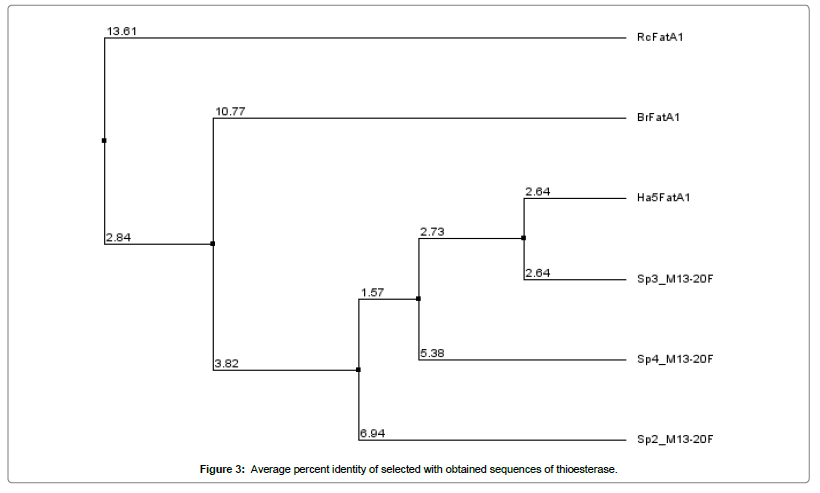 The obtained sequences are again aligned with the originally selected sequences of oil seed crops by multiple sequence alignment and results are given in Supplementary File 2.

The homology was based on small portion of entire coding sequence, as the sequence length of the obtained sequence was 126 to 429 bp, where as the length of the selected sequences was 1089 to 1696 bp. The expected DNA fragment range was 400 bp.

The maximum homology of the obtained sequences was observed to be with Helianthus annuus indicating that the thioesterase isolated from S. indicum was closer to H. annuus than the other oil crops compared.

Bioinformatics approaches to lipid research have recently begun using large amounts of mass spectrometry and microarray data. However, to our knowledge, there is no report that describes the investigation of fatty acid structures based on the comprehensive analysis of the gene contents in the genomes. In fact, the prediction of fatty acid structures from genomic information is difficult because of the functional diversity of the key enzymes. Various genes encoding enzymes involved in fatty acid synthesis have been isolated from the species and characterized. Thioesterases are the key enzymes in fatty acid biosynthesis in sesame appear to be showing homology to different oilseed helianthus. The reasons are unknown but a more detailed study of these enzymes across the different oilcrops will through some light on the fatty acid biosynthesis pathway. Variation in oil content and composition could also be contributed by variations in this enzyme. A combination of bioinformatics tools were used to predict a 3D model for Arabidopsis FatB (AtFatB) comprising a fold similar to that of E. coli.

In the present study after analysis of available sequences of Thioesterase related proteins, retrieved thioesterase subgroup clusters and selected six representative sequences of most members of thioesterase which specifically belonged to dicots as Sesamum is a eudicot species. In the present study codehop and web primer showed amplification for thioesterase. Thioesterase derived sequences also showed high homology with Arabidopsis, Brassica sp, Mus musculus and Homosapiens thioesterase genes. Basic bioinformatics techniques are powerful tools in terms of leading to the discoveries and analysis of novel genes [8]. Even though the results from bioinformatics studies are very helpful in directing and designing the experiments, they need to be supported and confirmed by further experimentation.