Suicide is an adverse event that can occur even when patient are hospitalized in psychiatric facilities. This study delineates the demographic characteristics of suicide attempts in mental hospitals and psychiatric wards of general hospitals in Japan, a country where the suicide rate is remarkably high. Analyses of incident reports on serious suicide attempts in psychiatric inpatients were performed using prefectural incident records between April 1, 2001, and December31, 2012. Suicide reports were included for 35 incidents that occurred over 11years, and demonstrated that 83% of patients (n=29) committed suicide and 17% (n=6) survived their attempt with serious aftereffects, such as cognitive impairment or persistent vegetative state. The male/female ratio of inpatient suicide was 1.5:1. The mean age of the attempters was 50.5 years (SD = 18.2). The most common psychiatric diagnoses for those with suicide incident reports were schizophrenia spectrum disorders (51.4%) and affective disorders (40%). Hanging (60%) was the most common method of suicide attempt, followed by jumping in front of moving objects (14.3%) and jumping from height (11.4%). Fifty-four percent of suicides (n=19) occurred within hospital sites and the remainder (46%; n=16) occurred outside hospital sites (e.g., on medical leave or elopement) while they were still inpatients.

Chlamydia is a common sexually transmitted disease caused by Chlamydia trachomatis, a gram negative bacterium. Chlamydia occurs in both genders frequently and can produce permanent damage to females’ reproductive organs, if not managed promptly and properly (Centers for disease control and prevention, 2014).

Newborns infected with Chlamydia often develop ophthalmia neonatorum, which manifests as neonatal conjunctivitis (Matejcek & Goldman, 2013). Another complication of Chlamydia in infants is pneumonia that is most frequent in age between one to three months (Miller, 2006).

It has been estimated in 2010 that the 3.1% of the world’s population (approximately 215 million people) were affected by sexually transmitted Chlamydia with females being more commonly infected (3.8% females, 2.5% males) (Vos, Flaxman, Naghavi et al., 2012). In 2010 there were at least 1200 deaths from sexually transmitted Chlamydia (Lozano, Naghavi, Foreman et al., 2012). Center of disease control, estimates 2.8% million new cases every year, alone in United States. Centers for Disease Control and Prevention (2010, 2014), this statistics is not representative of true value as a large number of patients having Chlamydia Trachomatis are asymptomatic and do not seek medical help. Chlamydia is more common in adolescents and young adults (Centers for Disease Control and Prevention, 2014). In the United Kingdom, Chlamydia is the most frequent reported sexually transmitted disease (Chlamydia, 2009).

Sexually transmitted diseases are under reported in Pakistan due to unavailability of proper and affordable screening procedures, also a large proportion of population has no or limited access to health facilities. Chlamydia infection is prevalent in Pakistan, and it was observed that the Chlamydia is responsible for almost 5 percent of all sexually transmitted diseases in Pakistan (Rehan, 2006). According to another study 1.5 percent of women presenting to hospitals for Gynecology/ obstetrics reasons had tested positive for Chlamydia by Giemsa staining method (Somji, Kazmi, & Sultana, 1990).

Besides having physical signs and symptoms of the disease, the patient with chlamydia trachomatis like any other sexually transmitted disease bears significant emotional distress and significant mental trauma. The mental consequences ranges from anxiety, depression to severe mental conditions, also there are social issues associated with sexually transmitted diseases and stigmas are well documented in some cultures and societies and acts as a barrier to seek treatment.

It has been observed that the depressed students are more likely to engage in sexual activities without considering safe sexual practices, therefore getting prone to infect with sexually transmitted infections. It was also ascertained that the students struggling with depression were likely to have less self-esteem which compromises their ability to negotiate for a safer sex. In a study conducted in the United States, it was found out that the patients with mild and severe mental disorders were more likely to claim for sexually transmitted infections than the patients without compromised mental health (Rein, Anderson, & Irwin, 2004). A Brazilian study indicated that prevalence of sexually transmitted diseases is higher among psychiatric patients (Dutra, Campos, & Guimaraes, 2014).

The objective of this study was to undermine the level of knowledge and to assess their practices regarding Chlamydia trachomatis in medical practitioners in Pakistan, hence to evaluate the need for further research regarding this issue.

This is a cross sectional study conducted during September to December 2013, in Sindh and Punjab provinces of Pakistan. Fourteen tertiary care hospitals were selected as per convenience. Data was collected from medical practitioners working at the hospitals. No age or gender restrictions were applied to participate in the study.

The data was collected from the participants through a semi structured self administered questionnaire which inquired about their knowledge and practices regarding Chlamydia trachomatis. The questionnaires were sent via emails to the medical practitioners. The email included the consent form and the questionnaire. After receiving the filled questionnaires from the participants they were provided with another email having the information regarding Chlamydia trachomatis and other STDs. Ethical approval was obtained from all four hospitals ethical committee. The participants were briefed regarding the confidentiality of their identity. The data was analyzed by Statistical Package of Social Sciences (SPSS) version 17. 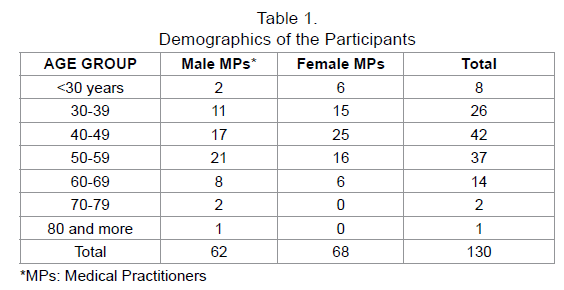 Table 1: Demographics of the Participants

In evaluating the knowledge of medical practitioners, some questions were targeted to assess their awareness and common outpatient practices. 17.7 % of male and 29.4 % of female participants asserted that they referred a patient to an infectious disease specialist in case the diagnosis was equivocal. In this study 72.5 % of the male and 55.8 % of the female medical practitioners mentioned that they took detailed sexual history of the patients with Chlamydia or with the risk of any sexually transmitted disease. Regarding inquiring about the drugs history from the patient at risk of STDs, 22.6% and 35.3 % of male and female participants respectively, revealed that they took a detailed drug history (Table 2).

Majority of the male and female medical practitioners (60 % and 75% respectively) advised safe sexual practices to the patients with Chlamydia and 14.5 % male and 16% female MPs offered screening to test for other STDs that might present in their patients. Only 1.5% of the female and none male MP ever notified Chlamydia to the partner of diseased patient. 24% male and 17.6% female knew the gold standard test of choice for Chlamydia Trachomatis.

Chlamydia trachomatis is a high incidence sexually transmitted disease globally. Public health experts are advocating awareness efforts to reduce its incidence and prevalence, which is a significant contributor of infertility worldwide. General practitioners’ attitude and practices towards the disease has a compelling outcome on the extent of the threat posed. Our study indicated a varying knowledge of the medical practitioners in regards to different aspects of the chlamydia. This study showed that less percentage of the MPs referred patients with an equivocal diagnosis of Chlamydia trachomatis to an infectious disease specialist. In Pakistan, the majority of the patients remains unknowledgeable about their conditions and solely depends on the advice of their primary physicians.

Sexual history is an integral part of a well obtained history; its significance escalates even more when a patient presents with a sexually transmitted disease. It is therefore crucial for a physician to investigate every aspect of patient’s sexual life and practices. Our study demonstrated that the majority of MPs took a detailed sexual history from a patient they thought at risk for STDs (72.5 males, 55.8 females). Temple-Smith et al in his study conducted in Australia found out that the majority of general practitioners update sexual history in all the patients (Hogben, St Lawrence, Montano et al., 2004). Burd et al also found that the vast majority of physician took detailed sexual history of the patients (Burd, Nevadunsky, & Bachmann, 2006). A relevant sexual history can aid the general practitioner to evaluate the etiology of the patients’ condition and plan management efficiently, including the valuable safe sex advices. Protected sex is the key for preventing all STDs; this should be high lightened to the patient at every outpatient visit. Our study demonstrated that the majority of MPs did give consultancy regarding safe sex. In a study conducted in Belgium, Verhoeven et al estimated that 44.3% of the physicians advised their patients regarding safe sex (Verhoeven, Bovijn, Helder et al., 2003). The major obstacles in offering advice regarding sexual practices and safe sex are language and comprehension problems, different ethnicities, inadequate training and in a patient with no sexual complains (Verhoeven, Bovijn, Helder et al., 2003).

Notification of the sexually transmitted diseases to the partner is mandatory to prevent an infection or reinfection. As the sexual partner is always at a high risk for communicating the disease, it is crucial that he/she should be referred for diagnosis and treatment. Majority of the patients are hesitant to notify their condition to their partner, the main rationalism for reluctance is possible abuse, losing the partner and embarrassment. In some circumstances where the physicians are not adequately trained for provider referral, (providing information to the partner by health care provider) physician acquires an authoritative role, which further dissuades the patient to share information (World Health Organization, 2014). Another important factor is the social dynamics of the society which varies almost throughout every region of the world. Partner notification has been proven effective in detecting and treating STDs in the partner hence decreasing its prevalence. In this study less than one percent of the health care providers (HCP) had ever notified the patient’s partner by themselves, this scant proportion of the HCP could be due to the fact that they asked their patients to provide the information regarding their condition to their sexual partners, as the patient feel more comfortable in patient referral (providing information to the partner by the patient). However provider referral has been shown more effective than the patient referral in terms of persuading the partner to the treatment (World Health Organization, 2014). In a study conducted in the United States, St. Lawrence et al found out that the majority (82-89%) of the physicians instructed their patients to notify their sexually transmitted disease to their partner (St. Lawrence, Montaño, Kasprzyk et al., 2002).