1165-158X
Cellular and Molecular Biology
Make the best use of Scientific Research and information from our 700+ peer reviewed, Open Access Journals that operates with the help of 50,000+ Editorial Board Members and esteemed reviewers and 1000+ Scientific associations in Medical, Clinical, Pharmaceutical, Engineering, Technology and Management Fields.
Meet Inspiring Speakers and Experts at our 3000+ Global Conferenceseries Events with over 600+ Conferences, 1200+ Symposiums and 1200+ Workshops on Medical, Pharma, Engineering, Science, Technology and Business

Comparison between Immunological and Molecular Based Methods for Diagnosis of Mycobacterium Infections in Cattle, Buffaloes and Human in Egypt

Copyright: © 2016 Elsayed MAS, et al. This is an open-access article distributed under the terms of the Creative Commons Attribution License, which permits unrestricted use, distribution, and reproduction in any medium, provided the original author and source are credited.

Visit for more related articles at Cellular and Molecular Biology

Bovine tuberculosis is a paramount notifiable disease in dairy herds caused by M. bovis, crucial bacteria of wide host spectrum; affects many mammal species, humans, and wild animals those act as a reservoir and hamper its eradication [1-7]. It belongs to Mycobacterium tuberculosis Complex MTC which includes M. tuberculosis, M. bovis, M. caprae, M. microti, M. canettii, M. pinnipedii, and M. africanum. Perception of M. bovis pathogenesis elucidates its presence, propagation, and transmission [8-14]. Ante-mortem screening basically relies on tuberculin skin test, serologic tests, cytokine assays as indirect diagnostic methods. These tests may be limited by lack of species-specific reagents and validation, frequent captures to administer and record results, animal injuries (i.e., TST) and sample-handling requirements [15- 18]. Although the sensitivity and specificity of serological assays may increase using specific antigens constituting alternative TB diagnostic tools [4]. Cell-Mediated immune response is the major host response to Mycobacterium infections and is complicated by many significant differences. A common problematic theme is the prolonged latent asymptomatic period which can last for many years. Fundamentally, T cells are cells of major concern in this immune response. Centering upon T helper-1cells (Th-1) it plays vital role during latency that correlates to the control of pathogen proliferation and progression. Many studies focused on the protective role attributed to CD4, CD8, and γδ T cells [7] and CD2. Detection of changes in these cells considered as diagnostic markers for Mycobacterium infection [15]. Moreover, Low-Cost and Density DNA microarrays (LCD) considered easy to use, sensitive and specific molecular tools for diagnosis of mycobacterial infections [6]. Furthermore, High-Performance Liquid Chromatography (HPLC) could be used for Mycobacterium identification through analysis of mycolic acids with great specificity [10].

Hence, this study was planned to compare Flow-cytometry, Immuno-chromatography, Low-cost Density Microarray (LCD) and High-Performance Liquid Chromatography (HPLC) for rapid detection of Mycobacterium in samples and isolates from cattle, buffaloes, and human cases.

Comparative Intradermal Tuberculin Test of 6000 Holstein- Frisian cattle and native breed buffaloes. Briefly, after shaving two sites on one side of the neck (12 cm apart) and recording skin thickness initially, 0.1 ml of avian tuberculin PPD?A (Avian PPD 25,000 IU/ml) was injected intradermal into the upper site and an equivalent dose of (Mammalian or bovine PPD tuberculin: 2 mg/ml) injected into the lower site of the neck, 72 h post injection the skin thickness measured again and recorded. The corresponding thickness ≥1 mm to <4 mm, ≥1 mm to <3 mm, and ≥1 mm to <2 mm classified as doubtful result. The result considered negative if skin response <1 mm and positive if skin fold thickness of ≥4 mm [2].

Human sputum samples from diagnosed cases: Three first morning sputum specimens of 5-10 ml after a deep productive cough for three consecutive days into a sterile cap. The specimens kept at 4°C before processing with N-acetyl-L-cysteine-NaOH (NALC-NaOH).

There found low proportions of tuberculin-positive cases which was detected by comparative tuberculin testing 79/6000 (1.31%). Significant difference was found between VL and NVL (<0.0001) (Table 2).

Table 2: Results of tuberculin test and post mortem examination. (Significant difference between VL and NVL is <0.0001).

Isolation and identification of Mycobacterium species from various lesions

There located weak downhill (negative) linear relationship (r): -0.173 between animal lesions, culture, and microscopy. It was found that only 51/89 (57.3%) were positive for isolation due to the absence of isolation from calcified pulmonary and digestive lesions and diminished isolation from NVL. On the other hand, human samples gave highest isolation 10/10 (100%) from (Table 3). 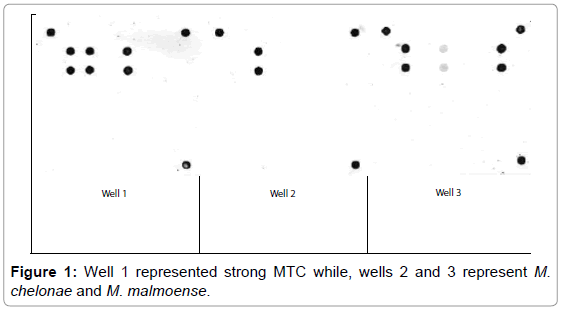 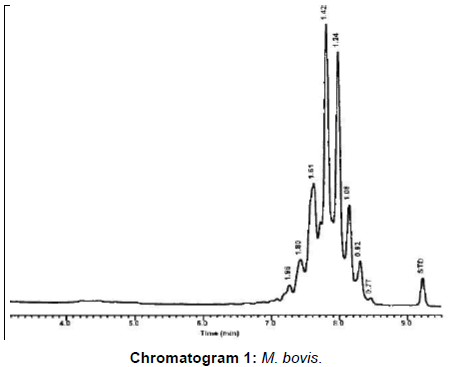 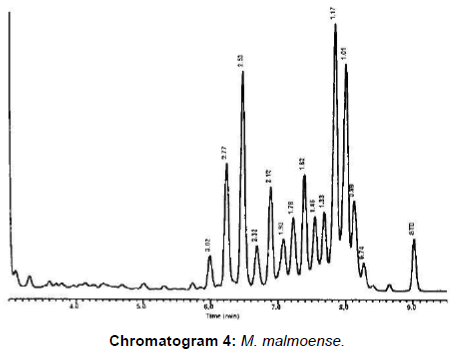 M. bovis is a crucial infectious agent of wide host spectrum besides cattle it affects other mammal species including humans. It belongs to Mycobacterium tuberculosis Complex members [14-16]. Interestingly, the overall incidence level of Mycobacterium in Table 2 was 1.31% lower than 2015 records from Egypt [23]. On the contrary, nearly similar to obtained results at Mozambique [27]. This low percentage attributed to regular commitment with test and slaughter program of the authorities to control the spread of infections.

Notably, the obtained VL and NVL results were analogous to that from Ireland 2013 [25]. In comparison with recent records from Egypt the VL was higher than 2015 records [23] while the NVL lower than these records. Significant difference was found between VL and NVL (<0.0001) that considered a feature of M. bovis infections that cause variation in the shape and distribution of lesions with respect to the isolation rate 57.3% from Table 3 nearly like that from cattle in Ethiopia after 2010 data [3]. The obtained isolation result from human sputum 10/10 (100%) was higher than the 2012 records from Egypt [21]. Isolation and identification of Mycobacterium species from various lesions in different organs

This mainly reflects various routs of infection and even possible secondary spread within the animal body.

Identifying Mycobacterium species using traditional methods is time consuming and expensive. For this reason, LCD array, HPLC and multiplex PCR confirmation performed here as attractive alternatives to the most traditional techniques. That’s mainly due to the high sensitivity and specificity of these diagnostic techniques:

From the results of molecular identification of VL tissue samples and culture (Table 4), Figures 1 and 2 and chromatogram 1, it was found that 20/25 (80%) confirmed to be from MTC members this result comes consistent with results from Brazil during 2014 [1].

And comparing the results from VL and NVL to data from the USA in 2012 [9], the isolation was lower, molecular identification results of MTC were higher while, that for the atypical was lower.

The incidence of non-tuberculous mycobacteria (NTM) infections has increased over the past couple of decades after reports from Canada [5]. Concerning molecular confirmation of results of M. kansasii Table 4, Figure 2 and chromatogram 2 from VL tissue and culture was 4/25 (16%) higher than results reported in USA from 2004 to 2011 [28] But comport with him in the possibility to isolate non-tuberculous mycobacteria from gross tuberculous lesions.

Over and above, the results of molecular identification from NVL tissue samples and culture positive samples Table 4 proved that 3/7 (42.9%) belong to MTC members. The untypable isolates were 4/7 (57.1%) lower than results obtained from Project SE3262), funded by Department of Environment, Food and Rural Affairs, UK (www.defra. gov.uk) [25].

From Table 4, Figure 1 and chromatogram 3, the molecular confirmation of mycobacterial DNA from human samples and isolates M. chelonae represented 2/10 (20%) comply with data reported from northeastern USA [24].

Moreover, only 1/10 (10%) (Table 4), Figure 1 and chromatogram 4 proved M. malmoense which confirmed by reports from Canada [5] Great correlation expressed between LCD array, HPLC and multiplex PCR as stated after results from Texas Department of Health USA [11]. M. bovis was most often isolated from cattle and buffaloes besides atypical species as M. kansasii. M. chelonae and M. malmoense reported from human cases with no evidence of pathogenic Mycobacterium infection.

From Table 5, sensitivity and specificity of Acon test nearly comparable to results from Pakistan [12]. The results of DPP VetTB assay and TB-ST (Tuberkulose Schnell test) higher than published data from National Animal Disease Center USA, and Brazil [17-22], the variability in readings of different serological tests could be attributed to the stage of Mycobacterium infection and the different antigens contained in each test.

With regard to data obtained in Table 6, it was trenchant that CD2, CD4, CD8 and δγ WC1+ from M. bovis infected cattle and buffaloes higher than tuberculin negative cases. This basically confirms infection with pathogenic Mycobacterium especially M. bovis and comes in agreement with results gained from the UK and USA [13-29]. This evidence indicates in vivo activation of these populations and great probability of being a diagnostic markers of pathogenic Mycobacterium infection.

This is the first report in Egypt about comparing different diagnostic techniques to detect Mycobacterium infections. It is clear that lower rates of pathogenic Mycobacterium species present in Egypt. But, still the low sensitivity of tuberculin test constituting a nightmare which calls for finding rapid, sensitive and specific ante-mortem diagnostic tool. Although (LCD) array, (HPLC) and multiplex (PCR) proved great sensitivity they override culture in being low time consuming methods. Serological tests and flow-cytometry are promising but further investigations using different antigens in different stages of infection are required.